An Evening with the Montgomery Biscuits

With this post we'll be wrapping up our 16-day stay in the Montgomery, AL area.  As you've read in our previous posts the original intent was to be here only 7 nights, but with the rabies incident and subsequent required medical attention, the 7 nights stretched into 16 nights.

This is our third time to stay at the Gunter Hill COE campground, so I'm not going into detail about the campground.  If you'd like a bit more pics and information, please take a look at one of our past posts on the subject.  Two things to point out about our current stay at Gunter Hill COE.  First, the pesky sugar ants which were a source of nuisance in previous visits were once again present.  We didn't freak out this time, however, and just treated them with Terro.  Great product, the ants were gone in a few days.  Secondly, we stayed over a couple of weekends this time when the campground was near capacity.  It was also very hot, so a lot of folks using a lot of electricity.  Our Progressive Industries EMS system cut power to our coach on a couple of occasions when the voltage got below 104.  I don't like the transfer switch in the rig having the contacts banging on and off when "good" power returns so we just fired up the generator for a few hours on a Saturday afternoon.  On Sunday when the "weekenders" left power levels once again returned to normal and we had no further problems.  Just wanted to mention that for anyone visiting during the busier parts of the year.


As most of our blog readers are aware, we like to visit minor league baseball parks when in an area which has a team.  Montgomery has the Montgomery Biscuits.  The Biscuits are the AA farm team for the Tampa Bay Rays major league team.  On the night we attendee the game they were playing the Mississippi Braves (the AA team for the Atlanta Braves). 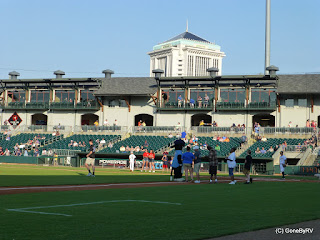 The Biscuits play in Riverwalk Stadium which was built in 2004. Seating is about 7000, with not a bad view in the park.  The neat thing about Riverwalk Stadium, however, is that the first base side of the park is built into an old train shed which was about 100 years old.  It makes for a visually interesting touch to the park. 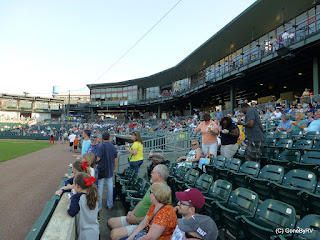 Because tickets to minor league games are relatively cheap we were able to sit on the third base side in Row 1.  We couldn't afford this at a major league game!


Pre-game and between innings entertainment is always a fun time at minor league games.  The mascots of the Biscuits are represented by "DJ Kitty" and "Big Mo".  They do a nice job of entertaining and interacting with the fans. 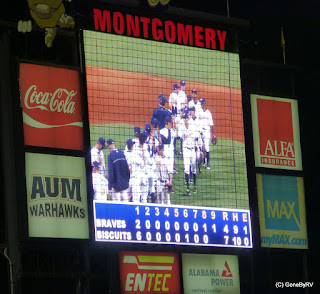 We usually don't have a good track record for the home team when we visit to watch a game.  The out come of this one was different, however, as the Biscuits pulled off the win 7-4. 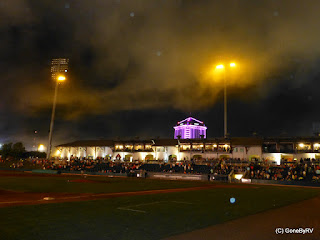 On Saturday evening games, the Biscuits have a post-game fireworks display.  It was very good.  Lasted a solid five minutes, with fireworks being shot off continuously during that time.  Here's a look at the ensuing smoke with the Regions bank building providing a contrast in the background.

This concludes our time in Alabama.  It's onward and upward to Florida. You're probably thinking, Florida in the summertime?  I'm thinking the same!

As always, additional pictures for today's blog are available in our Google+ Album.
Thanks for stopping by to take a look!
Posted by Steve and Karen at 11:29 AM