Rabies- Do We Feel Lucky?


Our stay was up in the Huntsville area and on a Monday morning we were due to head to Gunter Hill COE Campground near Montgomery, AL.  A relatively short drive and it looked to be an easy leg.

The day just started off wrong.  We encountered a light rain all morning while trying to pack up and get the rig ready to move.  We finally had all of the slides in. The last thing to do was start the engine, raise the jacks, unplug the electrical cord and we would be on our way.

I was near the rear of the coach when I had Karen start the engine and raise the jacks.  When she started the engine something was different.  I heard what sounded like something hit the fan blades (we have a rear mounted radiator and fan).  I told her to immediately shut down the engine.  When she did, I heard the meow sound of a cat.   OH CRAP!

The way the shroud fits around our fan it is virtually impossible to look into that area from beneath the coach.  I've taken off the inside floor access panel several times to get to the engine, so this was my next course of action.

Still, the fan blades are positioned very close to the edge of the plastic shroud and it was difficult to see into that space.  My fear was realized, however, when I saw a very small kitten huddled into the corner of the shroud area.  I figured a bit of noise and shouting would move him along.  Nope.  I next tried a garden hose.  Nope.  As it turned out this particular kitten was injured when the engine started (and later had to be euthanized). I was able to remove him from the shroud area.

Now, the real fun began.  There was a second kitten in there who had run to the other side of the shroud.  He was not injured at all, but refused to come out. Finally, he poked his head out and I thought that I had persuaded him to jump to the ground and take off.  (I now have neighbors on both sides attempting to help out.)

He climbed higher and Karen, who had already put on some rubber gloves, was able to grab him and carry him out of the coach.  Just as she was ready to release him he twisted around and bit her twice on the finger.  Really OH CRAP now!

We really didn't know what to do at that point.  It was Memorial Day Monday and the kitten (believed to be between 8-10 weeks old) was wild and had just taken off.  Karen immediately washed the wound and one of our neighbors who deals with show dogs gave her a topical antibiotic which he claimed is very effective in bites.

So finally in this discussion we turn to the subject of rabies.  All we knew about rabies was that essentially if you contracted it and were not vaccinated, the chances of survival in humans is VERY slim.  After a bit of research on the subject we found that according to the Centers for Disease Control (CDC) rabies in humans in the United States,  between the years of 1995-2011, was 51 confirmed cases. Of those, however, only 2 survived without further vaccination. Not 1 of those 51 cases involved contact from a cat, however.  Bats and dogs were the most frequent carriers.

I next checked with the Alabama Dept. of Health who indicated that 50-60% of rabies cases were contracted from raccoons.

Ok,  what to do?   Should we go with the statistics which indicate that the chances of contracting rabies from a cat bite is very slim.  We also pondered that a kitten this young would have probably been killed in a fight with another wild animal which could transmit the disease.

We also have visions of multiple painful "shots in the stomach". Fortunately, science has progressed in that regard.  Although not a "real" consideration, the series of vaccinations is darned expensive.

Well, we decided to play it safe.  When we got to Montgomery we immediately went to an urgent care place.  Actually, a waste of time.  The rabies vaccination series is not something the average urgent care, or doctor's office for that matter, is going to have on hand.  We were sent over to Baptist Health Hospital where a supply of the vaccine was on hand.

The way the rabies vaccination series of shots today works as follows for a person who has never had the vaccine before:
1) Human Rabies Immune Globulin (HRIG) is administered based on a person's weight.  This shot is administered as near the site of infection as possible.
2) The rabies vaccine will be given on days 0 (the same time as the HRIG) and on days 3,7, and 14.  These shots are given intramuscular (IM) into the deltoid muscle.

Because the HRIG would be pretty darn painful as one shot, Karen received one dose in the right arm, and one dose in each buttock.  The first vaccine shot was administered at the same time into her other arm.  Subsequent shots on days 3, 7, and 14 were alternated in the arms.

So............we decided to be safe than sorry.   I actually love Karen very much (although she might dispute that sometimes) and I'd hate to lose her to a disease which could have easily been prevented.

Our original stay at the Gunter Hill COE was due to be 7 days, but we extended it to 16 days to allow the series of shots to be administered at the same hospital.   How much did all of this cost?  We have no idea at this point.  The entire procedure has been submitted to our Anthem BC/BS, but I do intend to post the final costs once we have them.

Hopefully, this will never happen to anyone else, but if it does, at least maybe some of the old "horror" stories we were envisioning can be dispelled through our involvement here.

If you do ever encounter a bite from a wild animal, or domestic animal, attempt to capture the animal. Animal Control personnel will quarantine the animal for 10 days and if no signs of rabies manifest itself in the animal, then none of the shots will be required.  Wow, I sure wish that we would have had the presence of mind to capture that little booger! 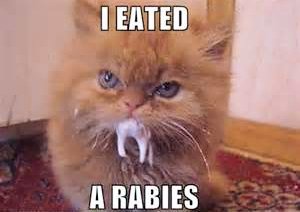 Thanks for dropping by to take a look!
Posted by Steve and Karen at 10:49 PM