Craters of the Moon National Monument and Arco, ID

Posted from Park City, UT     (Click on Pics to Enlarge) 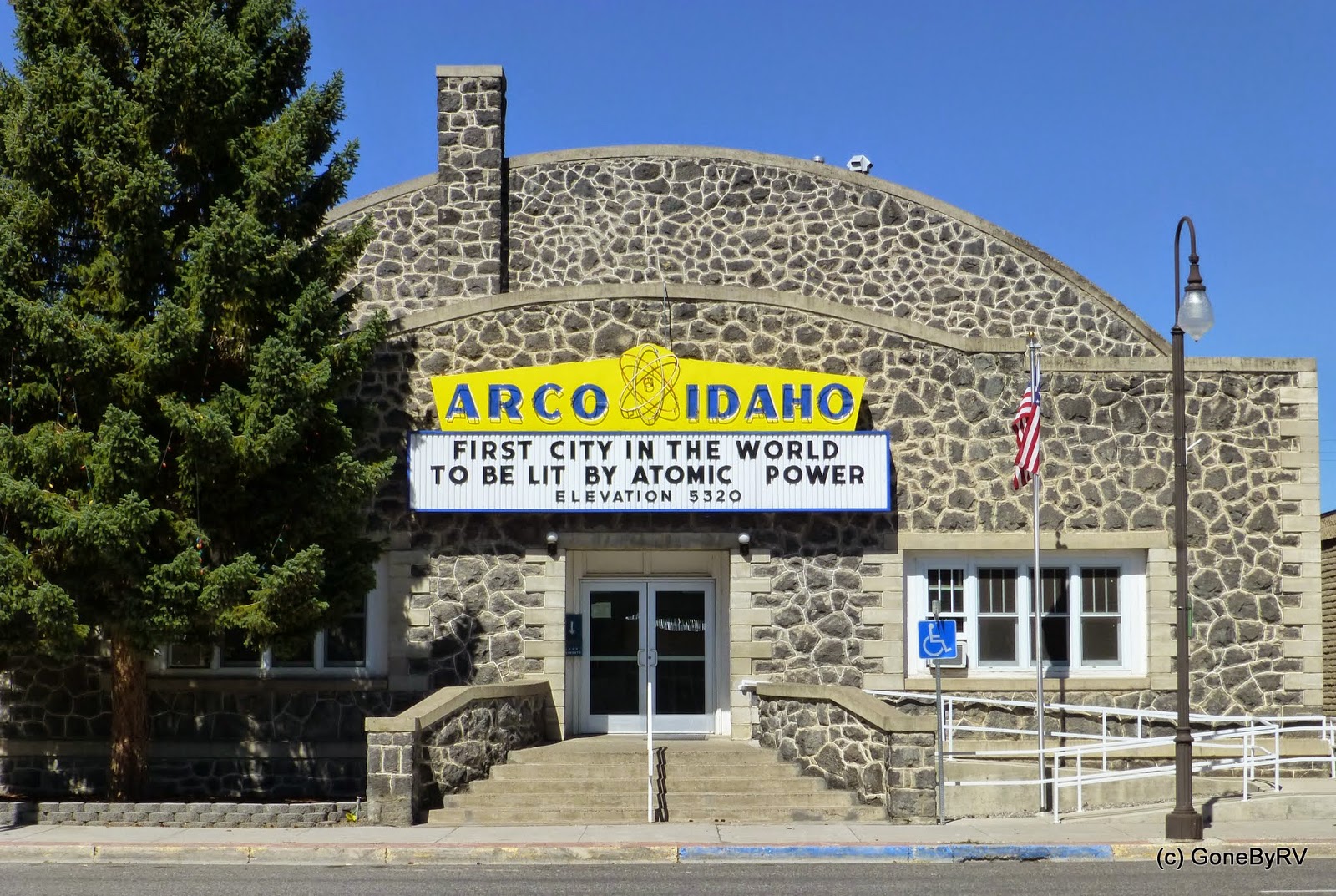 Wow, I can't believe how far behind I am in posting.  We traveled to Arco, ID last week with the intention of visiting two of the area's main attractions. (Hey, there isn't much in Arco, ID.)  Arco's "claim to fame" is that it was the first city in the world to have electricity generated by nuclear power. This occurred on July 17, 1955. 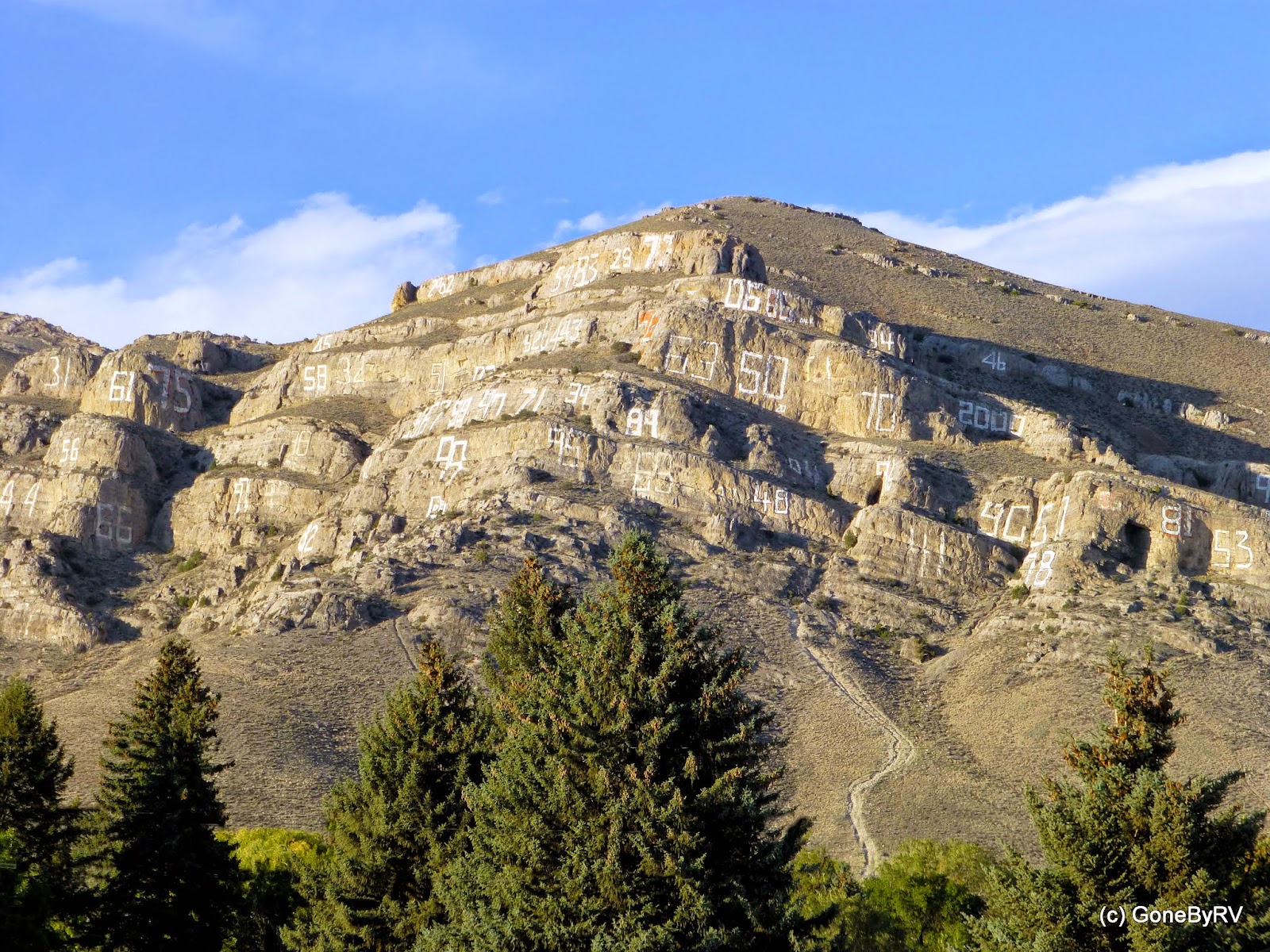 I guess the other landmark in Arco is an area named "Number Hill".  It was a tradition which began long ago when the high school graduating class placed their "year" on the nearby mountain.

The first area we wanted to visit was the Experimental Breeder Reactor 1 (EBR-1) Museum approximately 18 miles east of Arco. That didn't happen as the museum is only open from Memorial to Labor Day each year.  If you'd like more information on this one, take a look at this link. 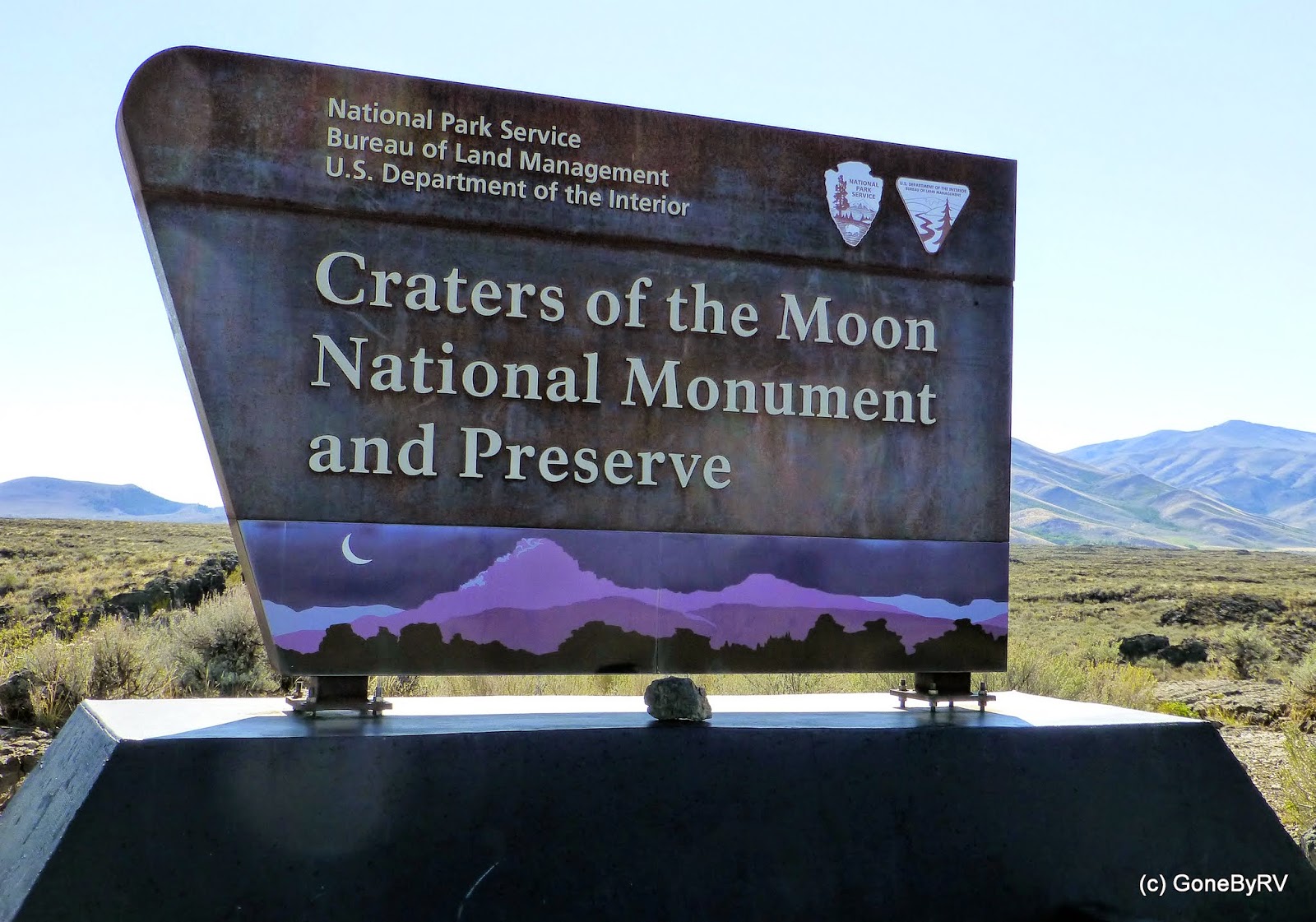 The other, and largest draw for this area, is the Craters of the Moon National Monument and Preserve.  There is only one entrance to this area off of Rt. 20/26/93, so it's pretty easy to find. 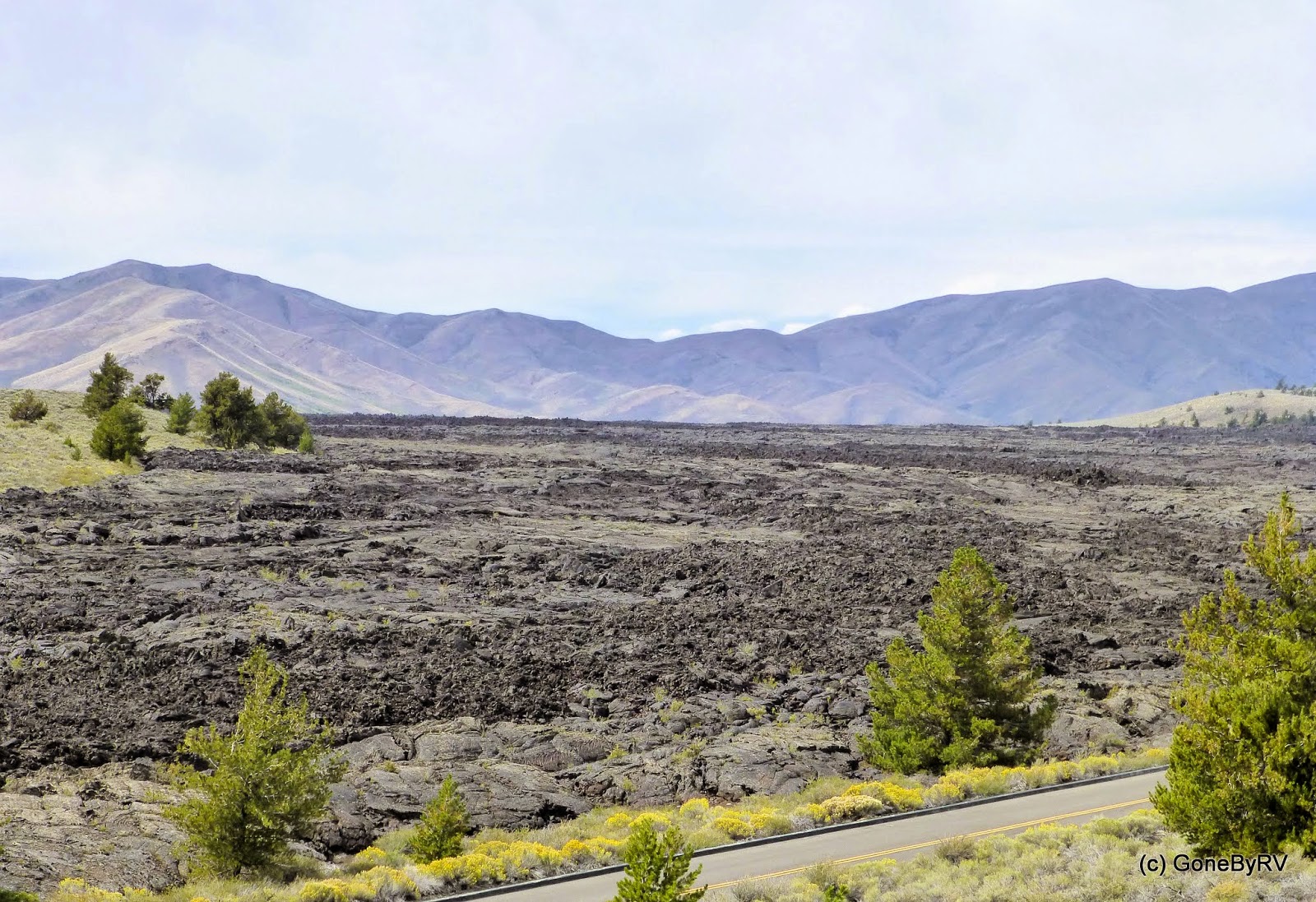 A Presidential Proclamation in 2000 expanded C of M Monument to approx. 750,000 acres to protect almost all of the Great Rift volcanic rift zone which stretches 52 miles and ends at the foothills of the Pioneer Mountains. 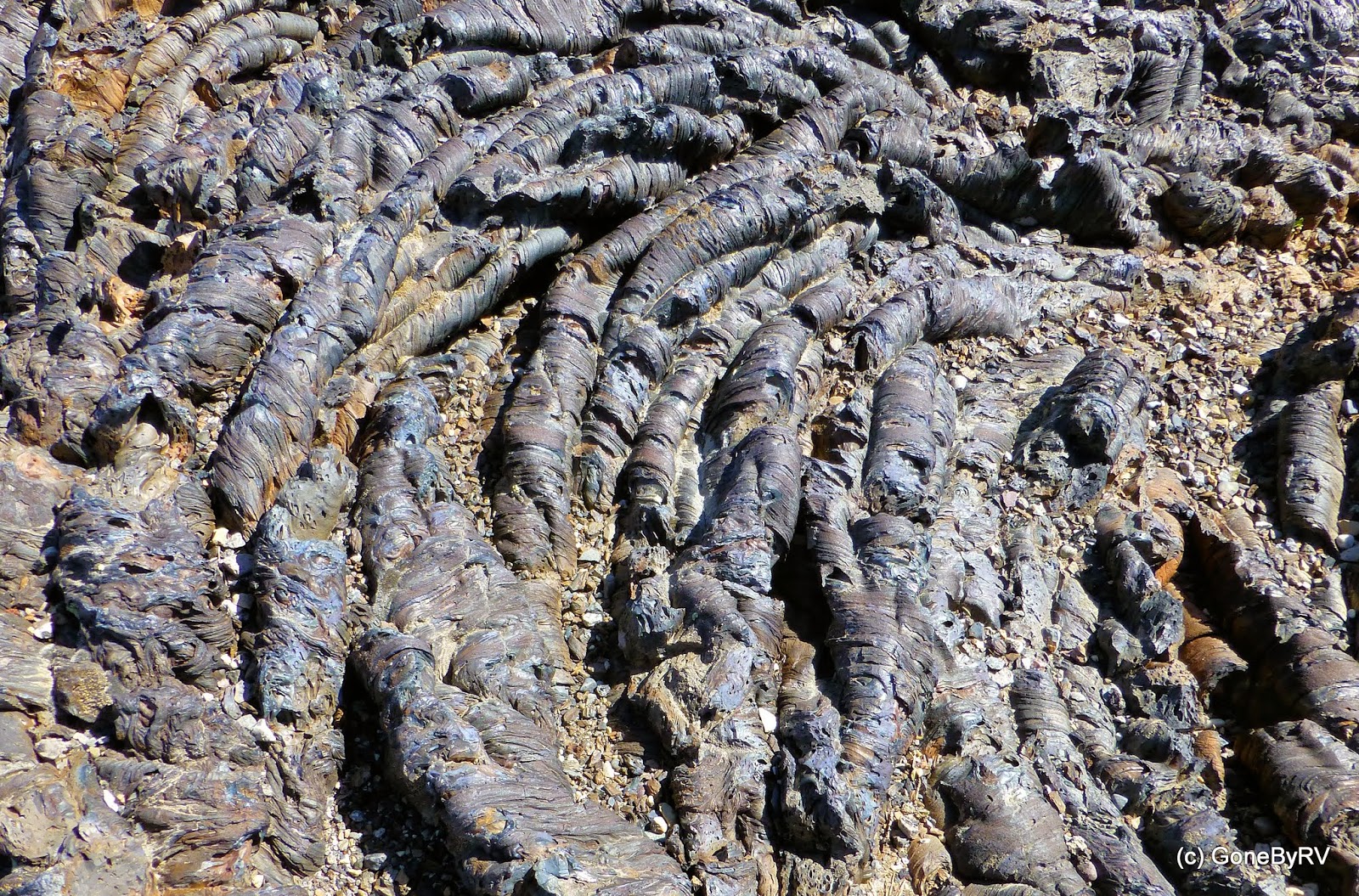 There are two predominant types of lava seen in C of M.  The first is called "pahoehoe" and means rope lava.  This type is formed when the lava is free flowing rapidly before cooling. 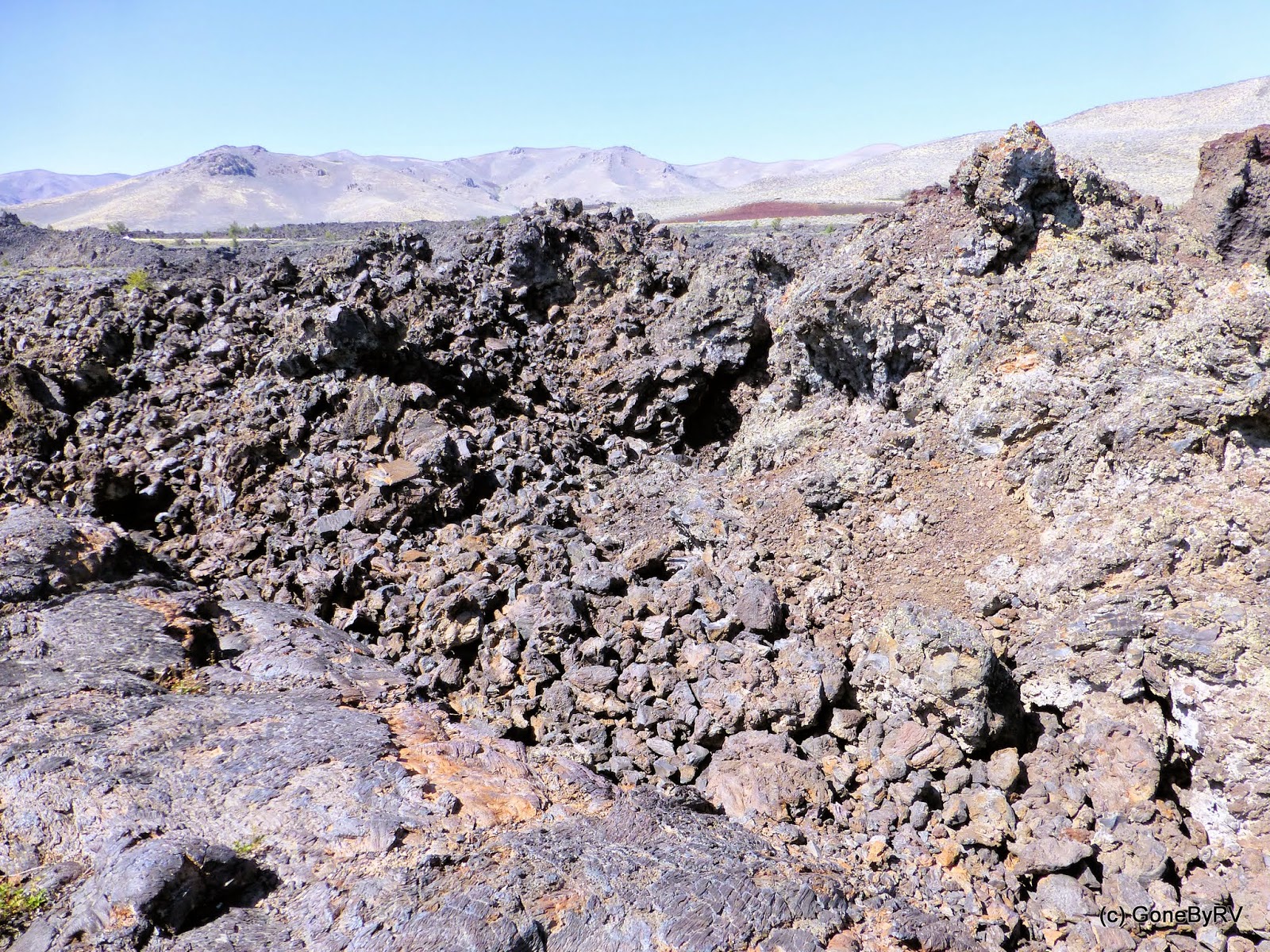 The second type widely seen here is A'a (pronounced "ah ah").  It is characterized by free chunks of angular material.  There is a lot of this type to be found here. 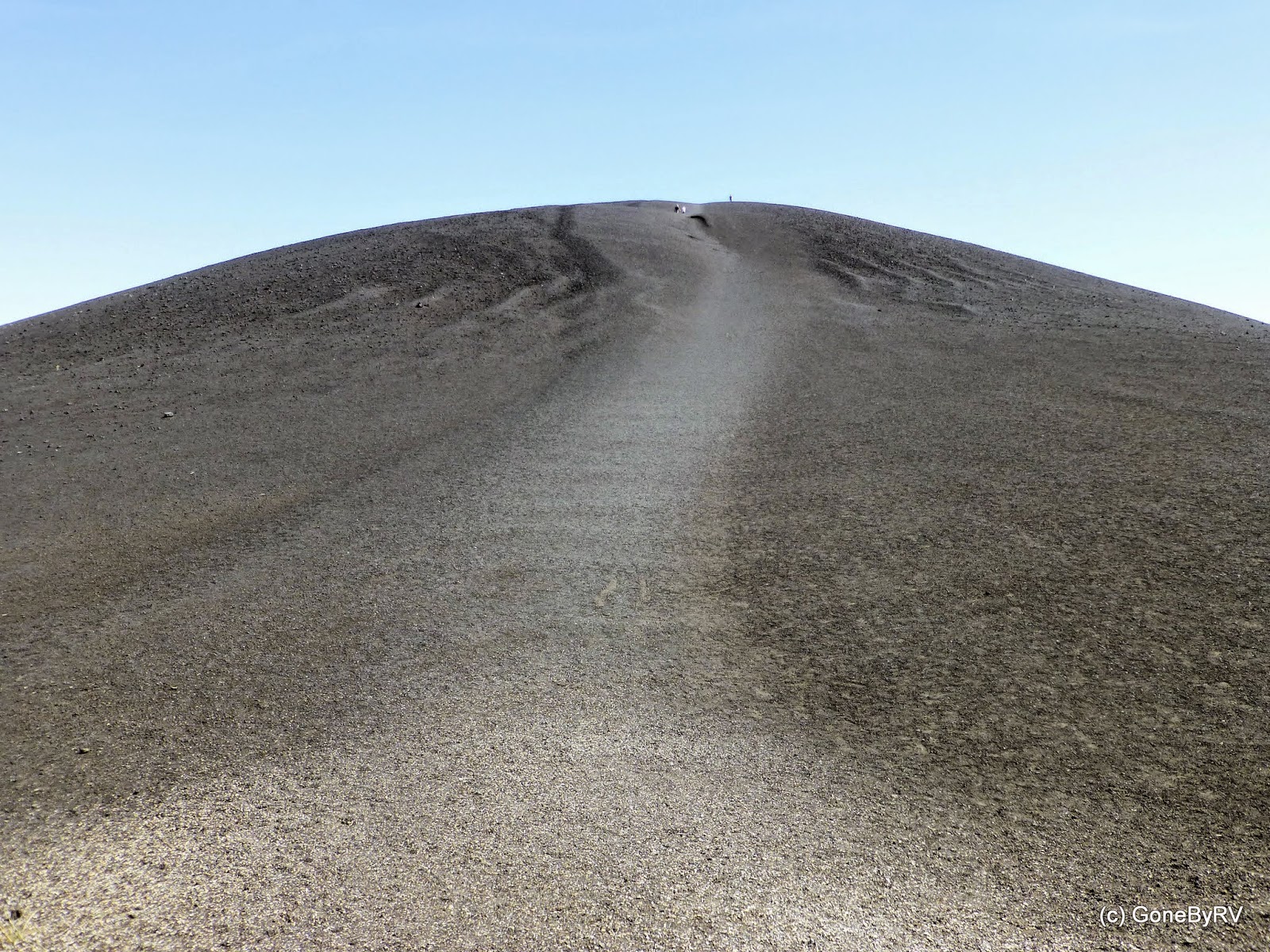 Inferno Cone is one of the largest in C of M accessible to the public to climb.  Cones are formed when gas-rich froth erupts high into the air and piles into a mound of cinders.

The view from the top of Inferno Cone. 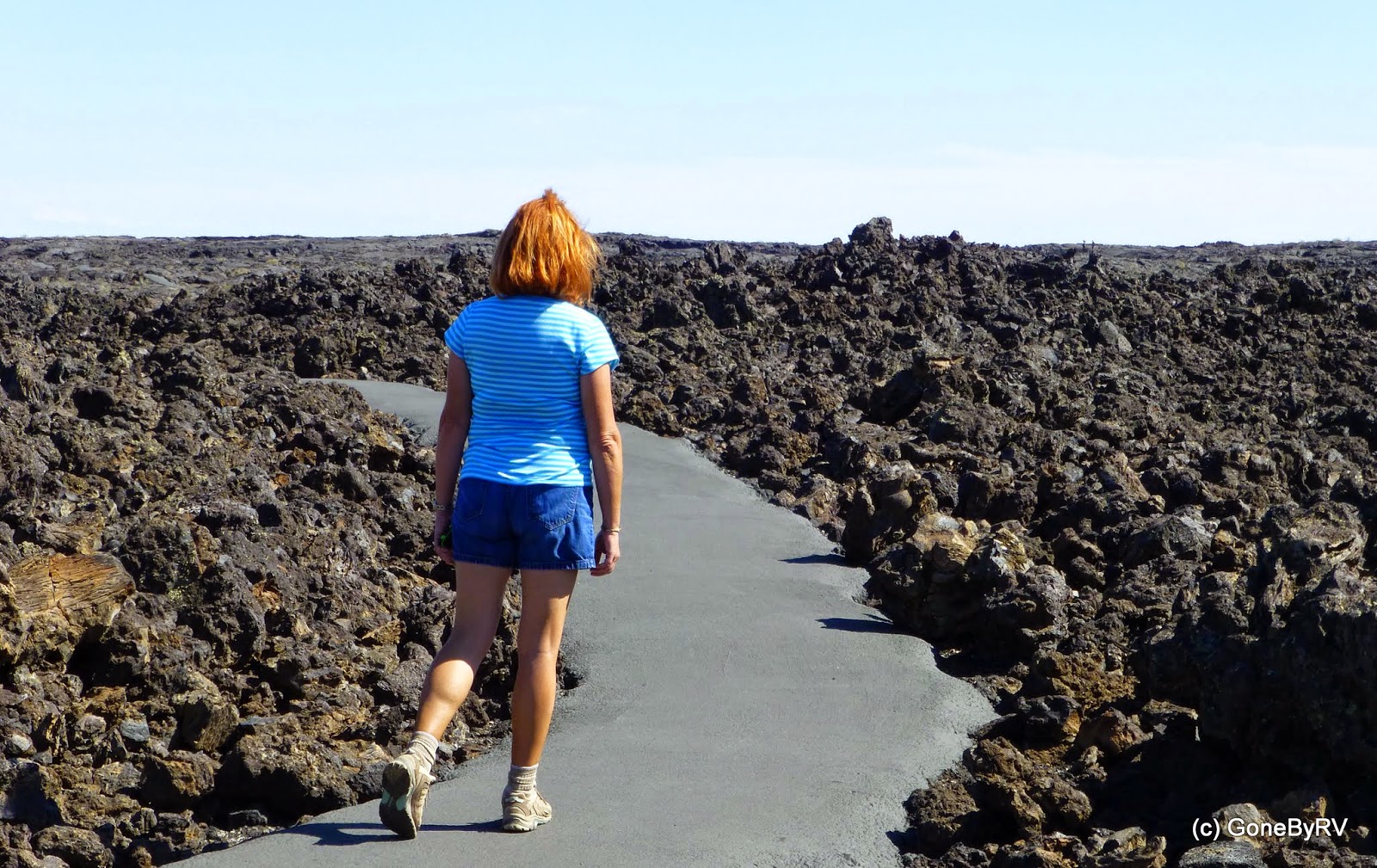 There are several caves in C of M which were formed by lava tubes. Lava tubes are formed when the outer edges of the flowing molten lava cools and hardens, while the lava inside is still flowing. The only cave available for entrance without a flashlight was Indian Tunnel.  A short walk through the lava fields led to the caves. 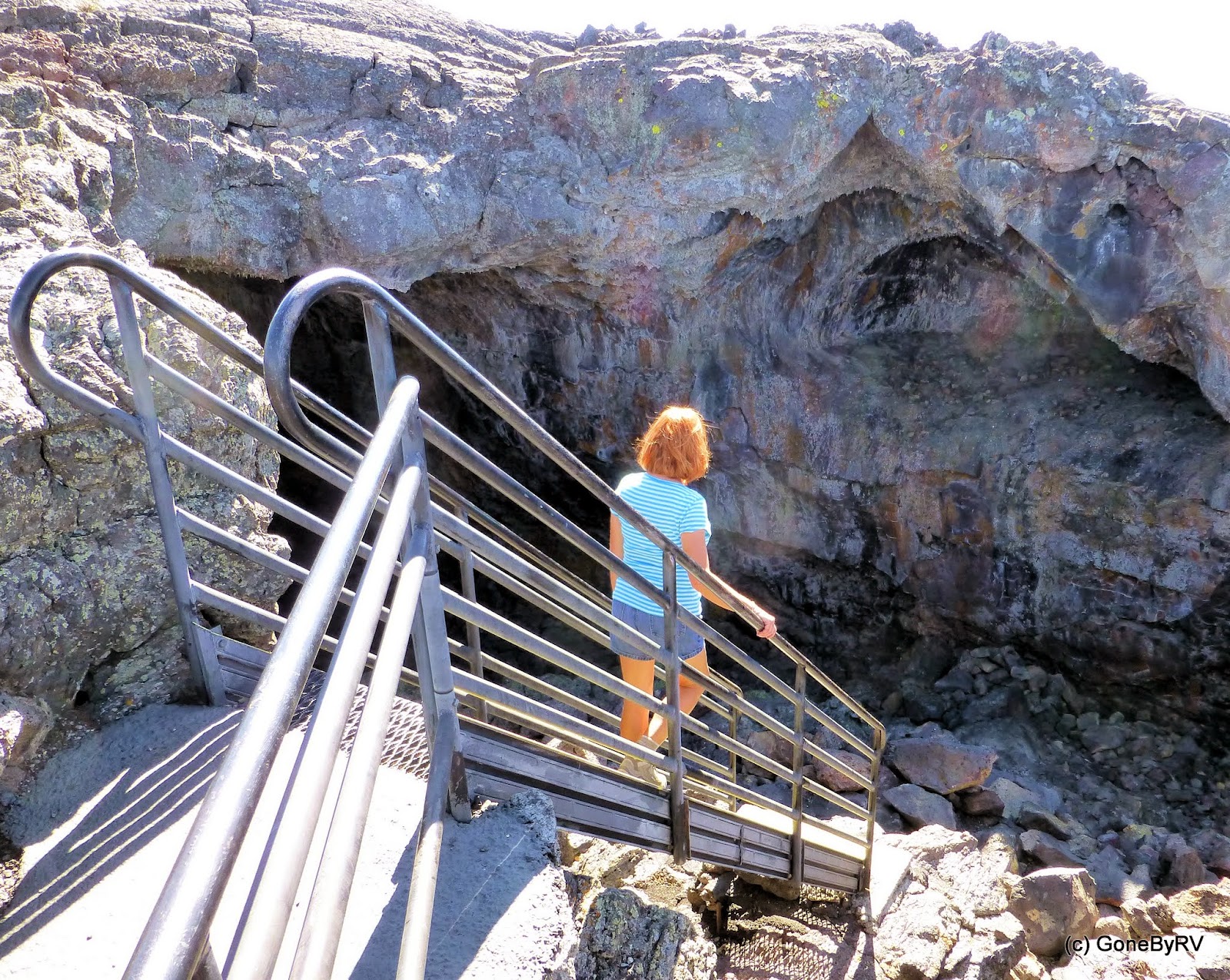 The Indian Tunnel cave is the most visitor friendly.  No flashlight is needed as there are several openings to the surface which provide natural lighting.  Heck, there's even a metal stairway to the entrance. 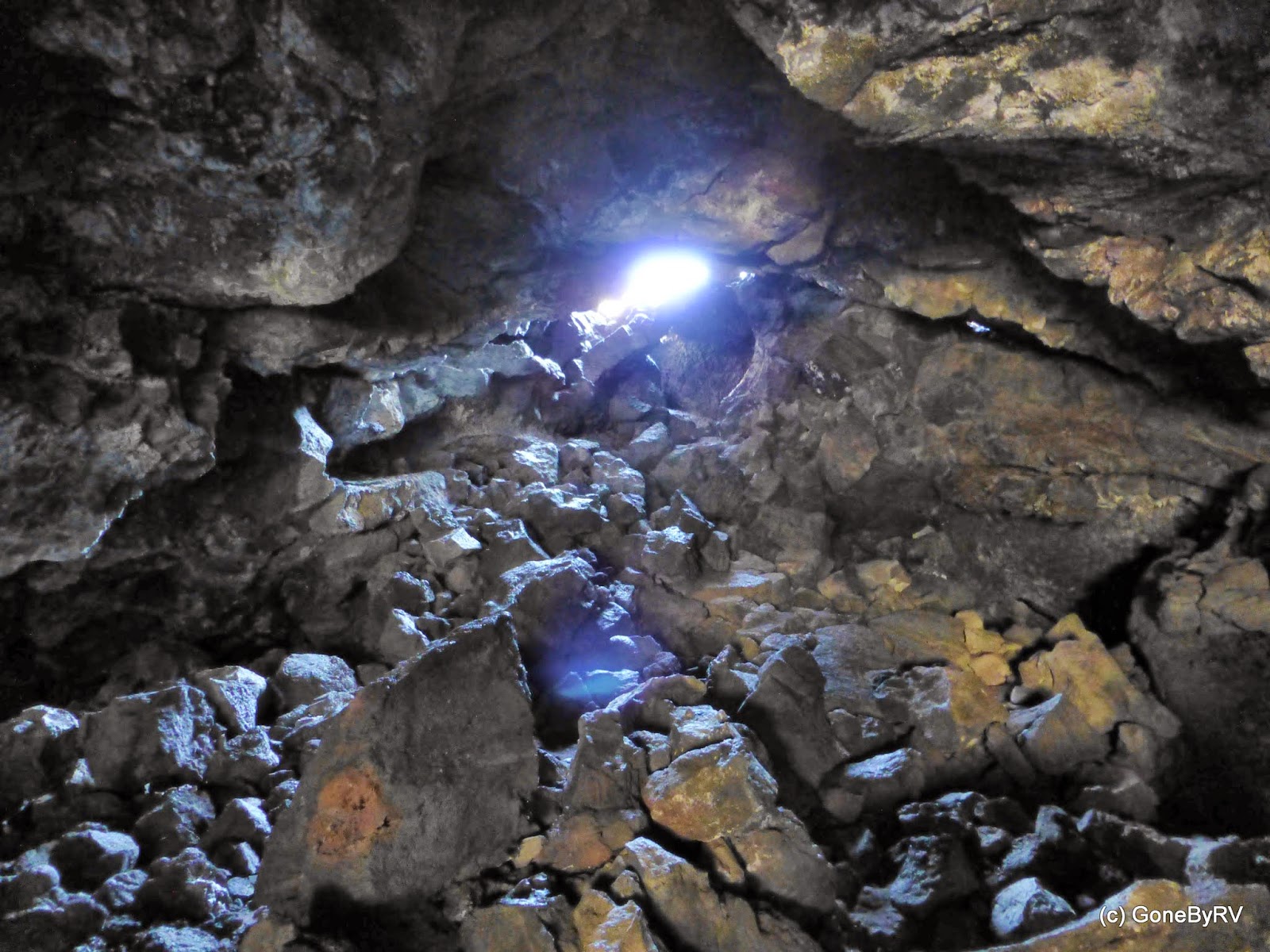 Here we wander through the cave leading toward the exit. Because we didn't have a flashlight with us on the first day, we just decided to hike a few of the other trails.  We came upon this multi-colored lichen lava along the Tree Mold trail. 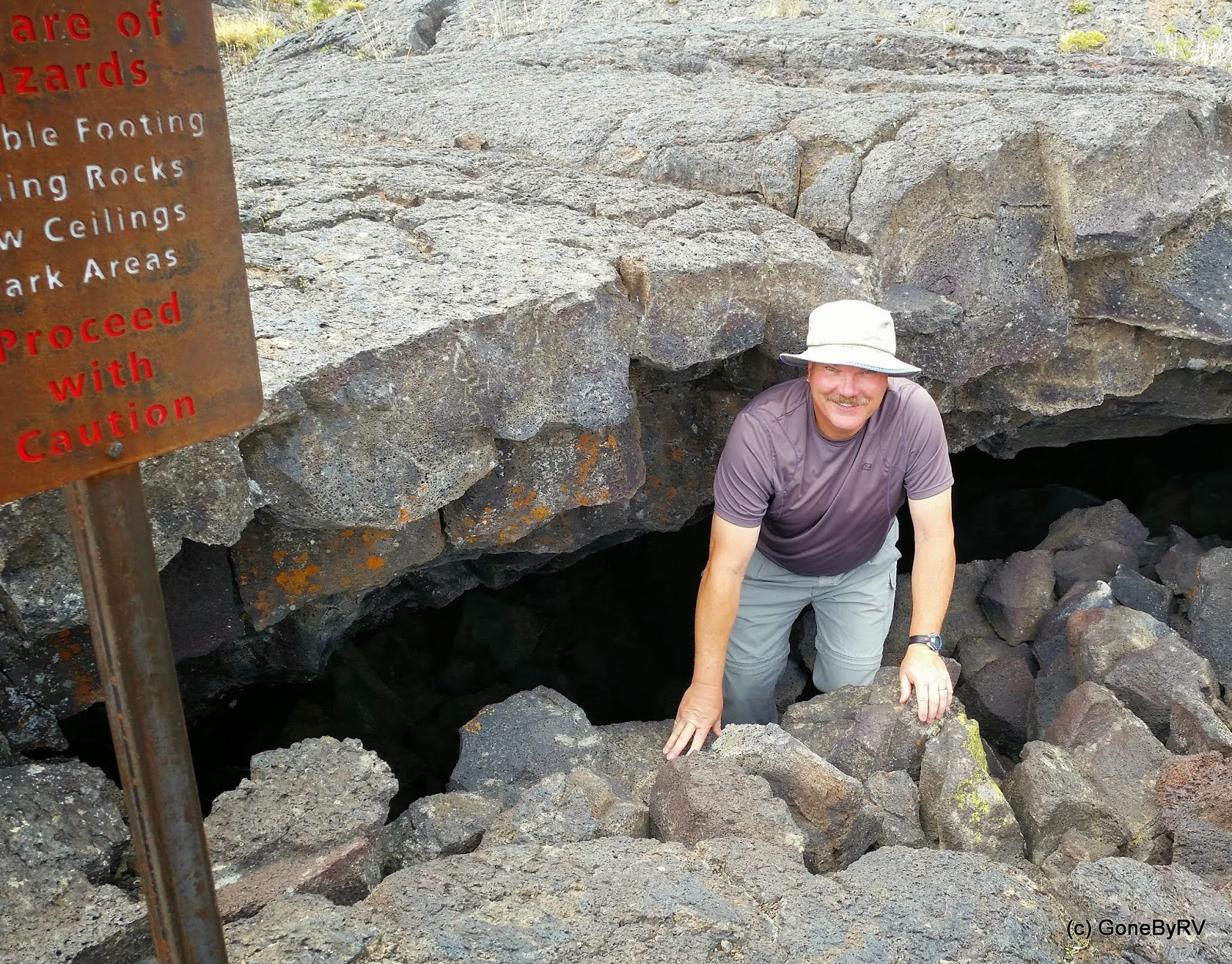 When we returned to C of M on a subsequent visit we (I) went down to explore Buffalo Cave.  I might be a bit too large to do any "real" cave exploring, but these were pretty cool. 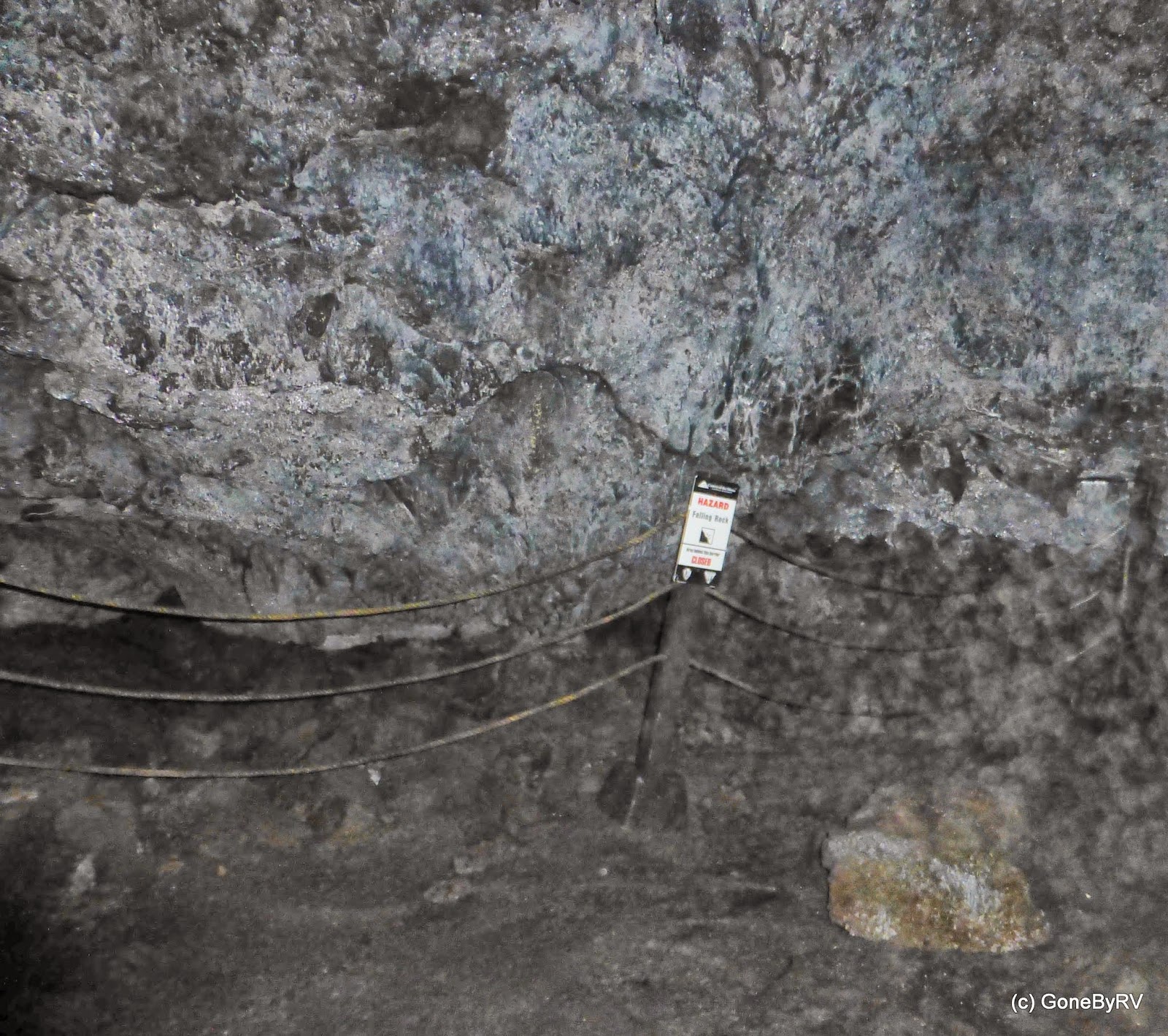 We were actually somewhat surprised at the lack of "park supervision" for visitors going down in the caves.  There was no personnel around. No sign-in logs when entering the caves. These are totally "wild" caves.  No improvements whatsoever.   The only signs we encountered were "Danger" signs when roof collapses had occurred. 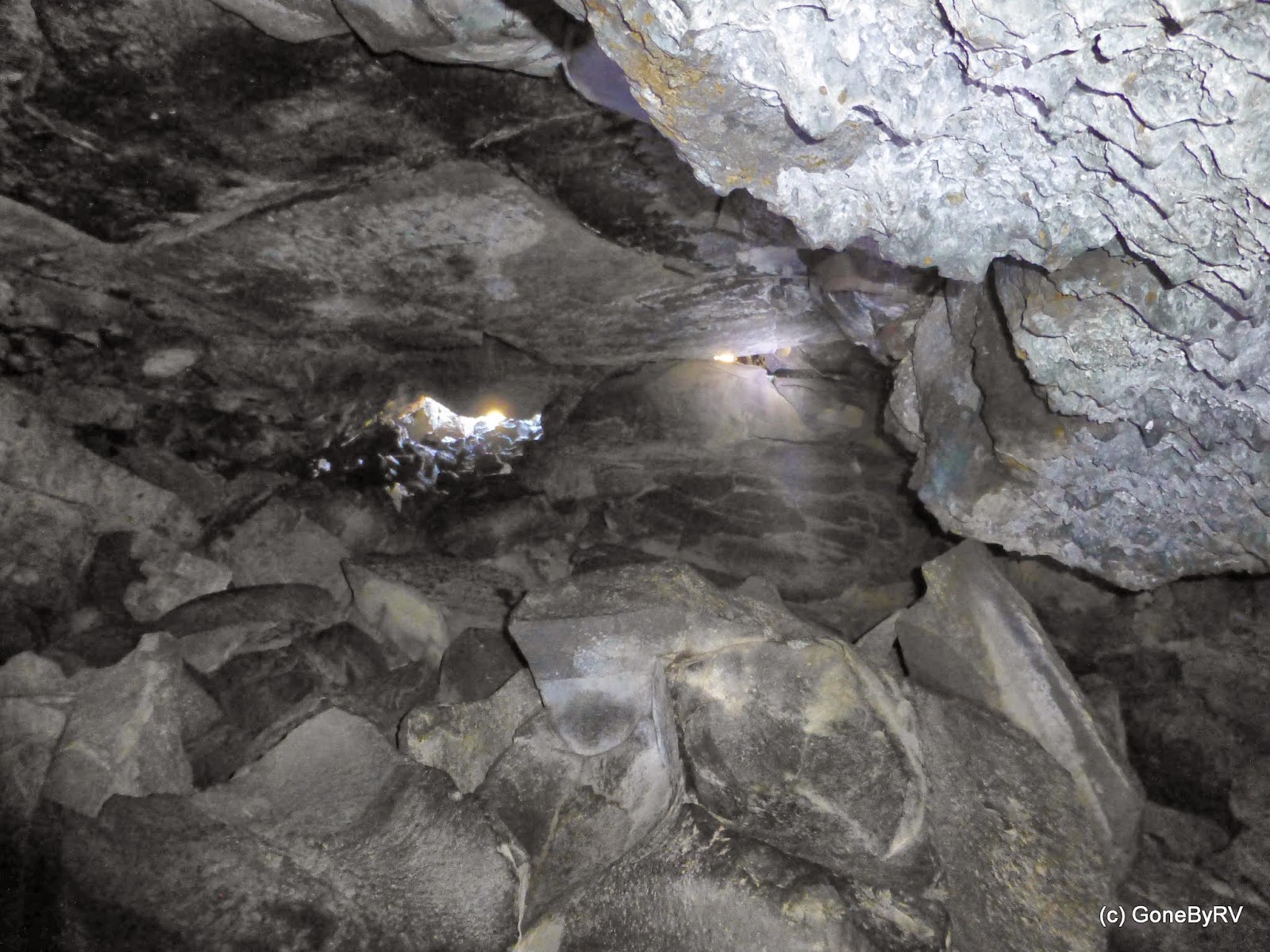 One of the caves named Boy Scout Cave was discovered by a group of Boy Scouts in 1927.  The description of this cave indicated that it had ice on the walls and slick floors, but I didn't locate any.  It must have been too late in the year.  The light in the center of the picture is from surface light at the entrance.  Believe me, it's VERY dark inside these caves without a flashlight.

If you're ever in the area, a visit to this National Monument is definitely recommended.  There are many more pictures of the C of M in our Google+ album.

We actually left the Arco, ID area today and headed to Park City, UT. Hopefully, I'll be a bit better with keeping up with our blogging activities in that area.


Thanks for dropping by to take a look!