Movin' On to Moab

Last Tuesday we left Capitol Reef NP (Torrey, UT) and traveled to Moab, UT.  Our intention while here is to visit Arches National Park, Dead Horse Point State Park, and possibly Canyonlands National Park.  Quite a tall order in the number of days we have allocated. 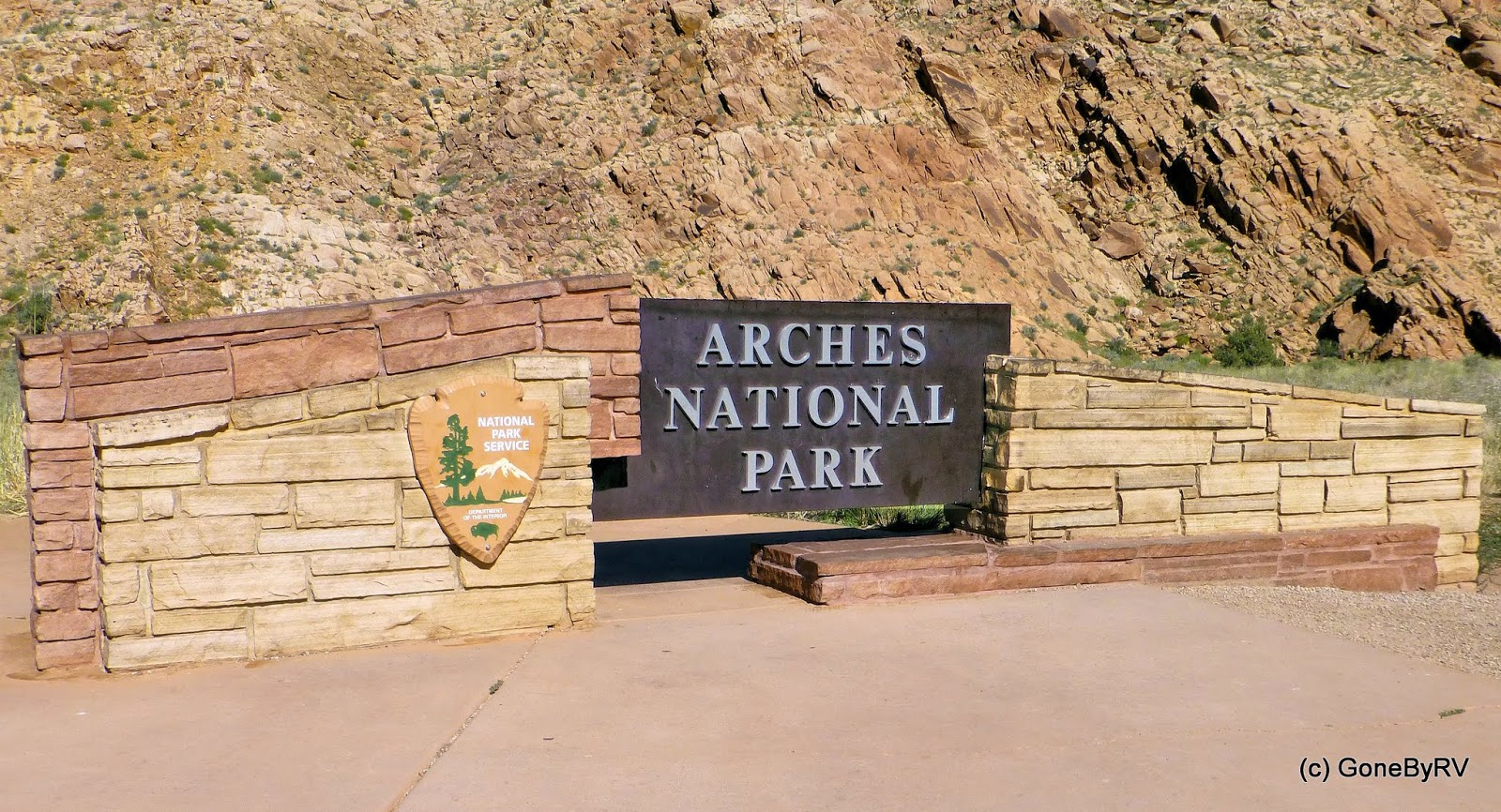 As we always do once arriving in a new area, we first make a visit the Visitor's Center of the park we intend to explore.  We've never been in this area of Utah at this time of the year, so we didn't realize how busy it would be.  There are a lot of folks visiting during this cooler time of the year.

The first day here we just went inside the Visitor's Center, watched a video, picked up some maps, and made a drive thru of the park without taking too many pictures. 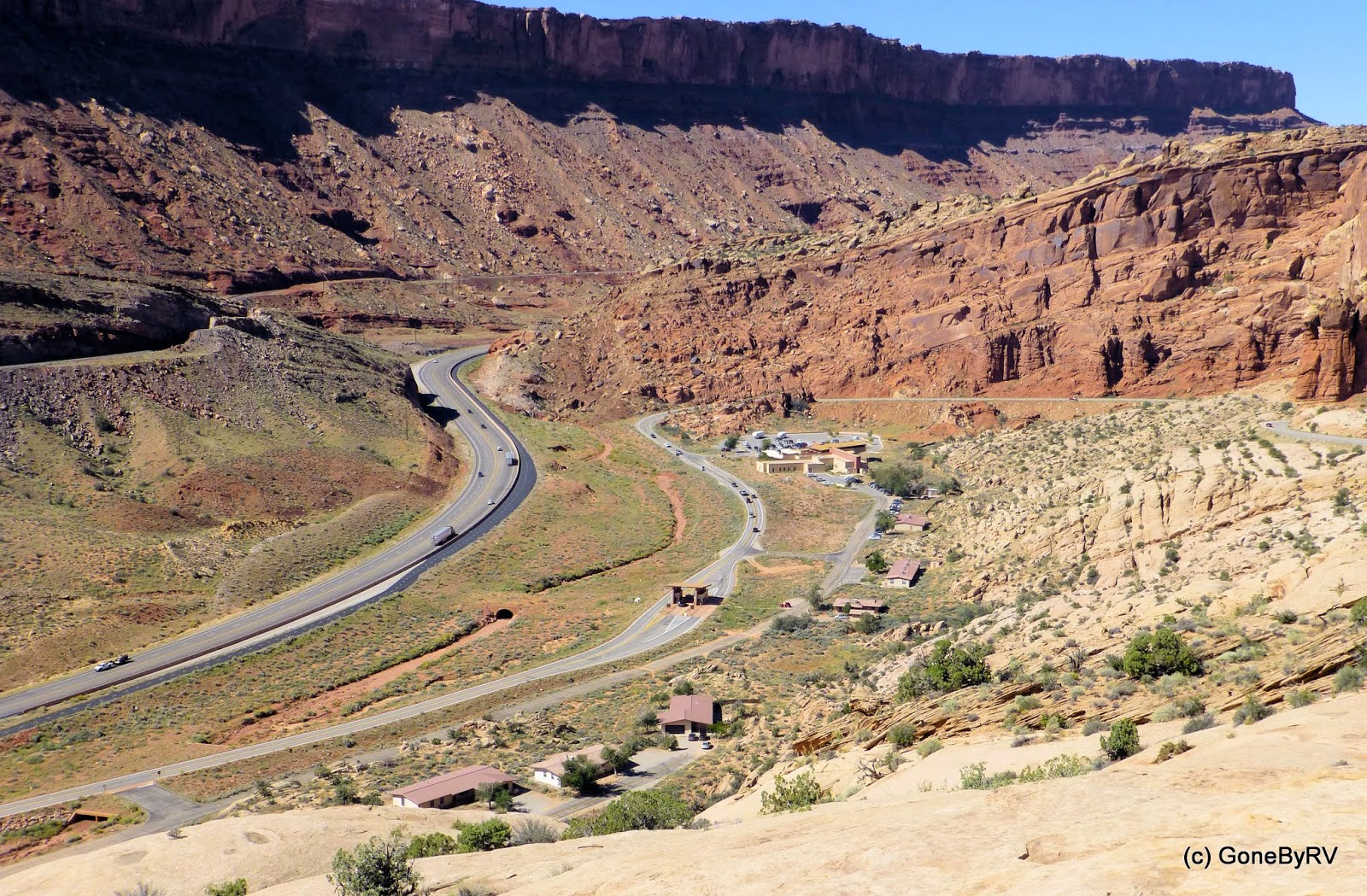 The first mile or so is a steep drive.  The first pullout shows the Moab "fault line" and allows you to take a first look at the surrounding cliffs. The Visitor's Center is located near the center in this picture.

Ok.  It's now Day2 and time to do some hiking. We originally decided to do the trails in the "Windows Section" of the park, but later added the Park Avenue Trail later on the same day. 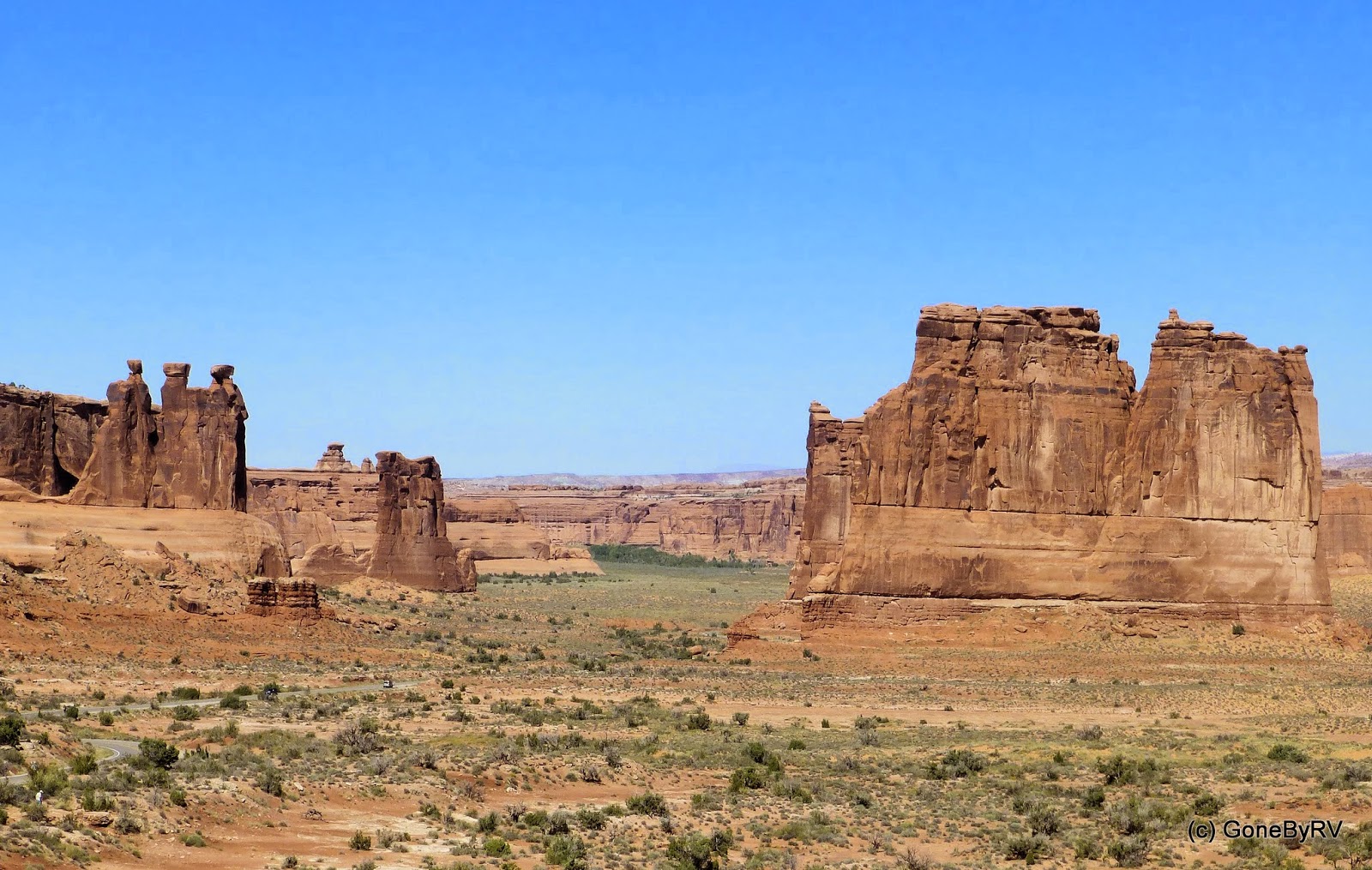 We didn't even get to the first trail when it was time for a pullout.  We're stopped here at the La Sal Mountains Viewpoint and looking at a formation nicknamed the "Three Gossips". 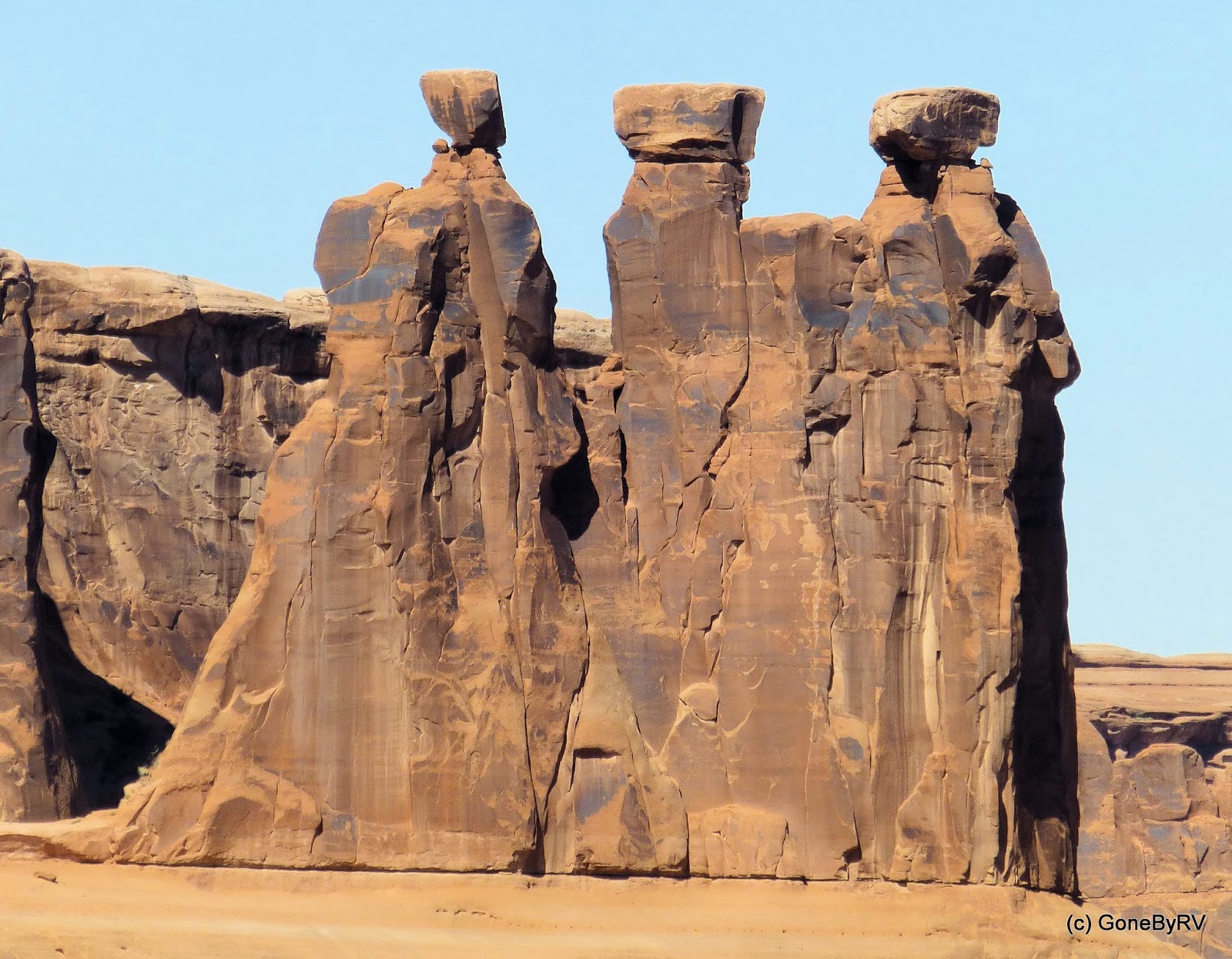 Here's a closer view of the "Three Gossips". 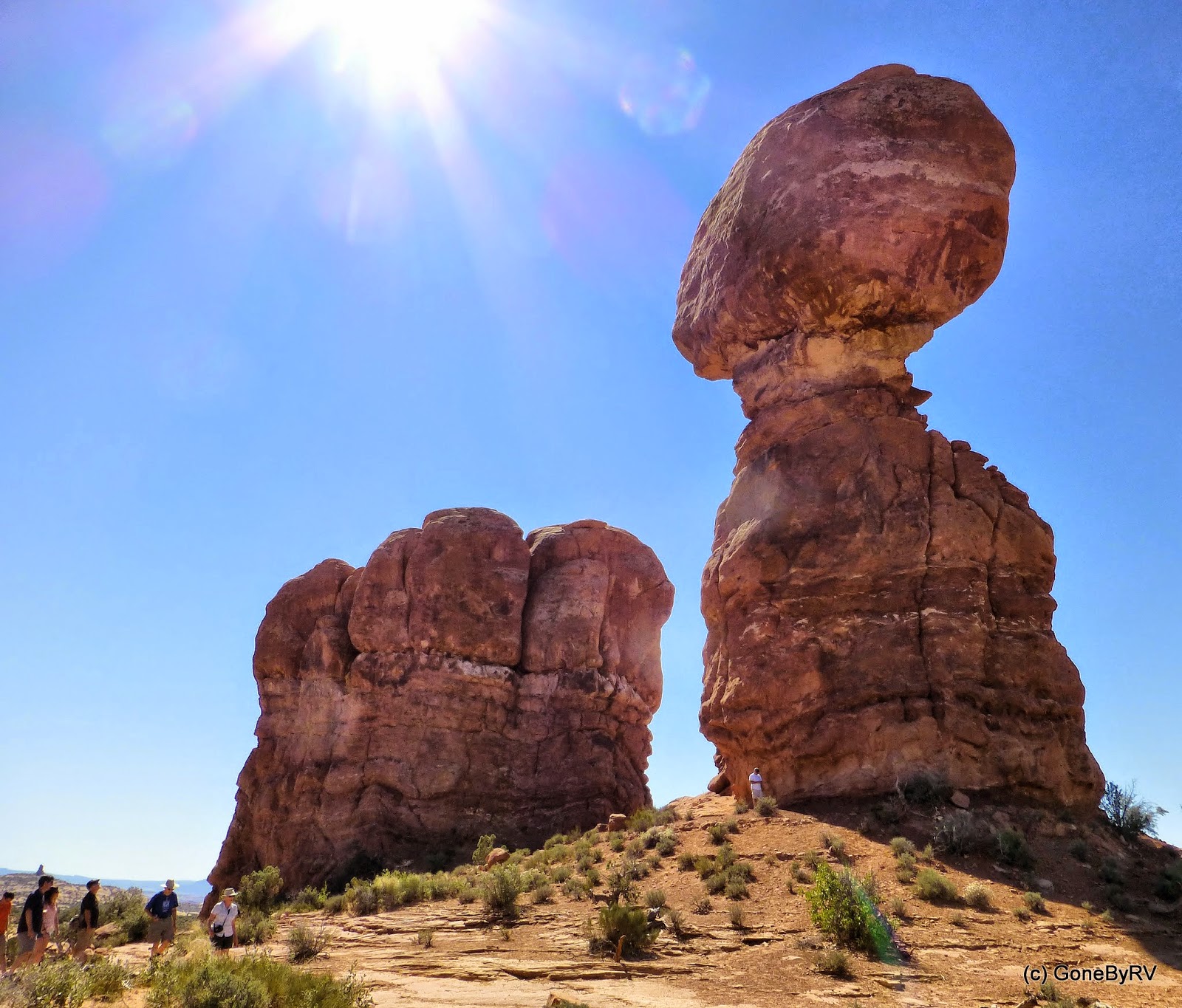 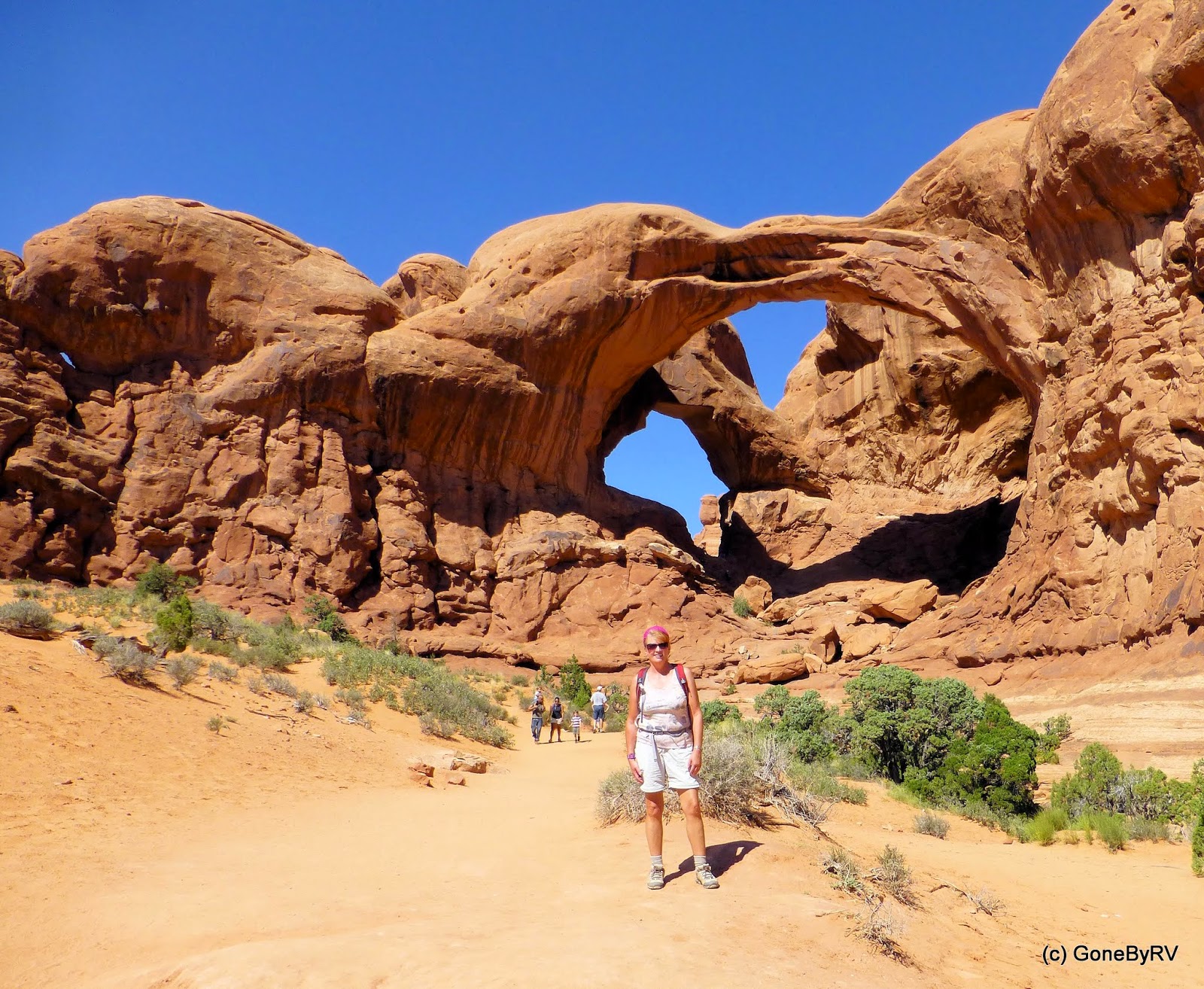 Moving toward our first hike we parked in the "Windows Section" to visit "Double Arch".  This rock formation is 0.5 mile from the parking area and a very popular point for visitors. This was a pretty cool formation. 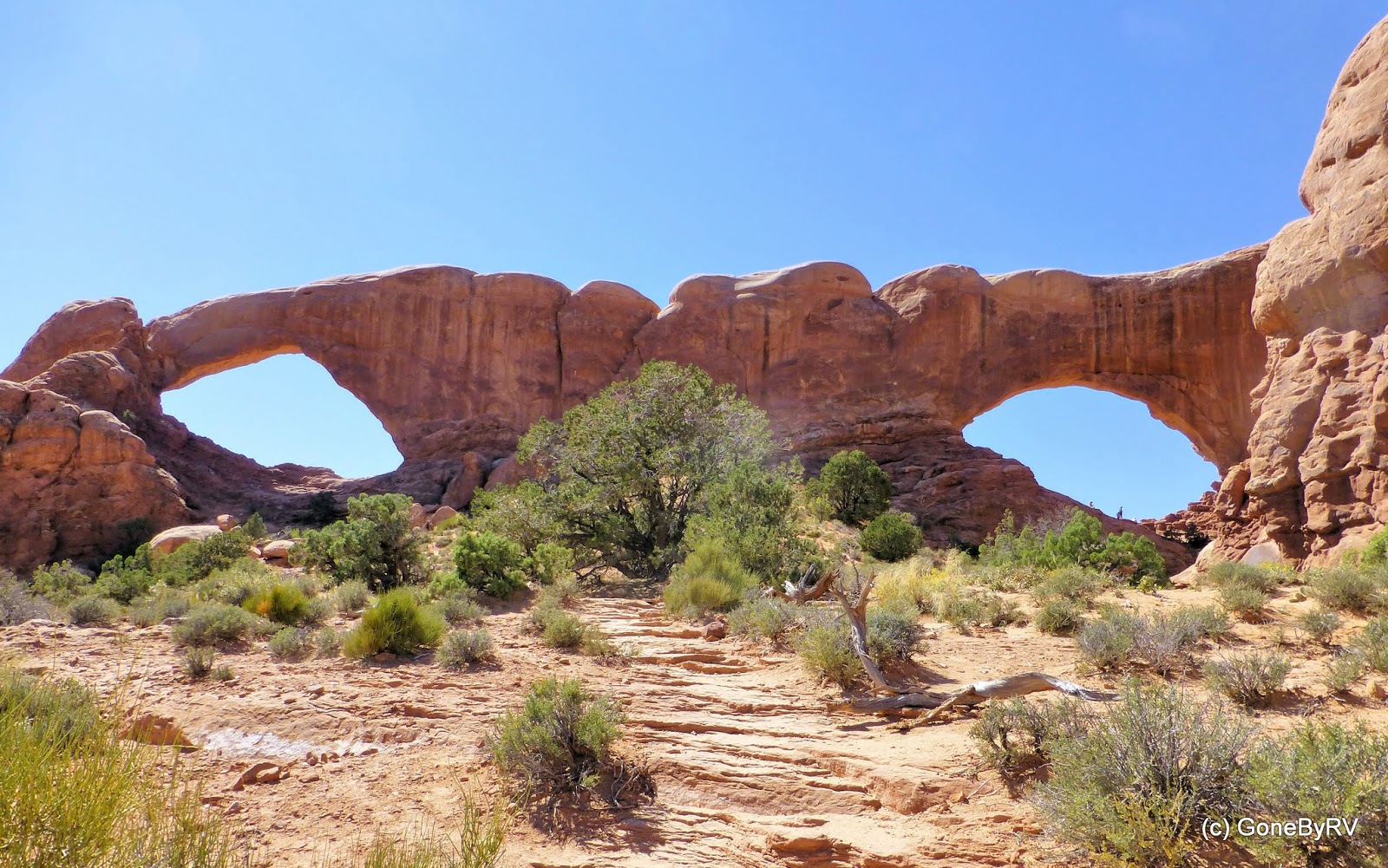 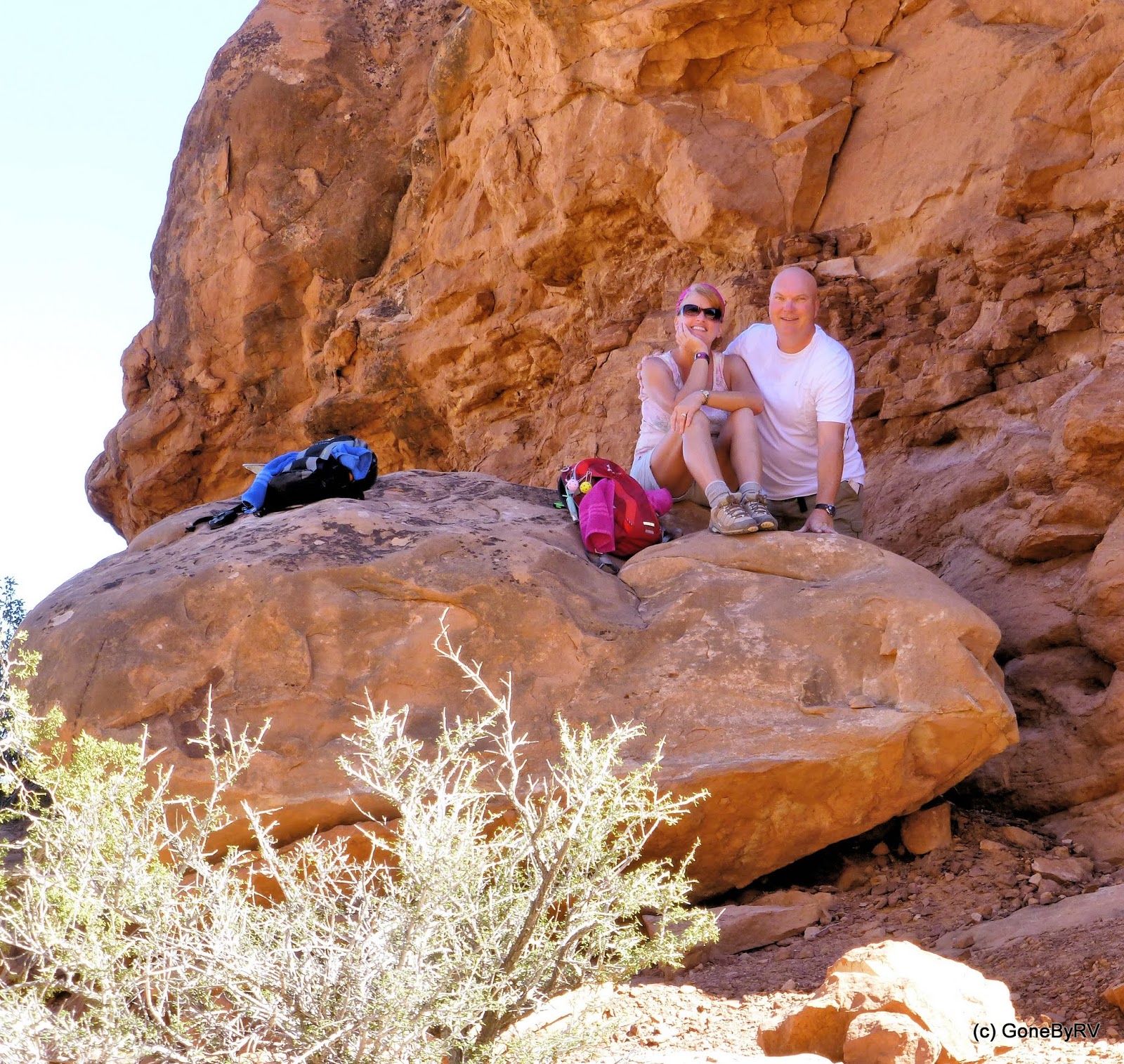 We also found this a quiet place to take a lunch break. Not one person passed by on this trail during the entire time we stopped for lunch. 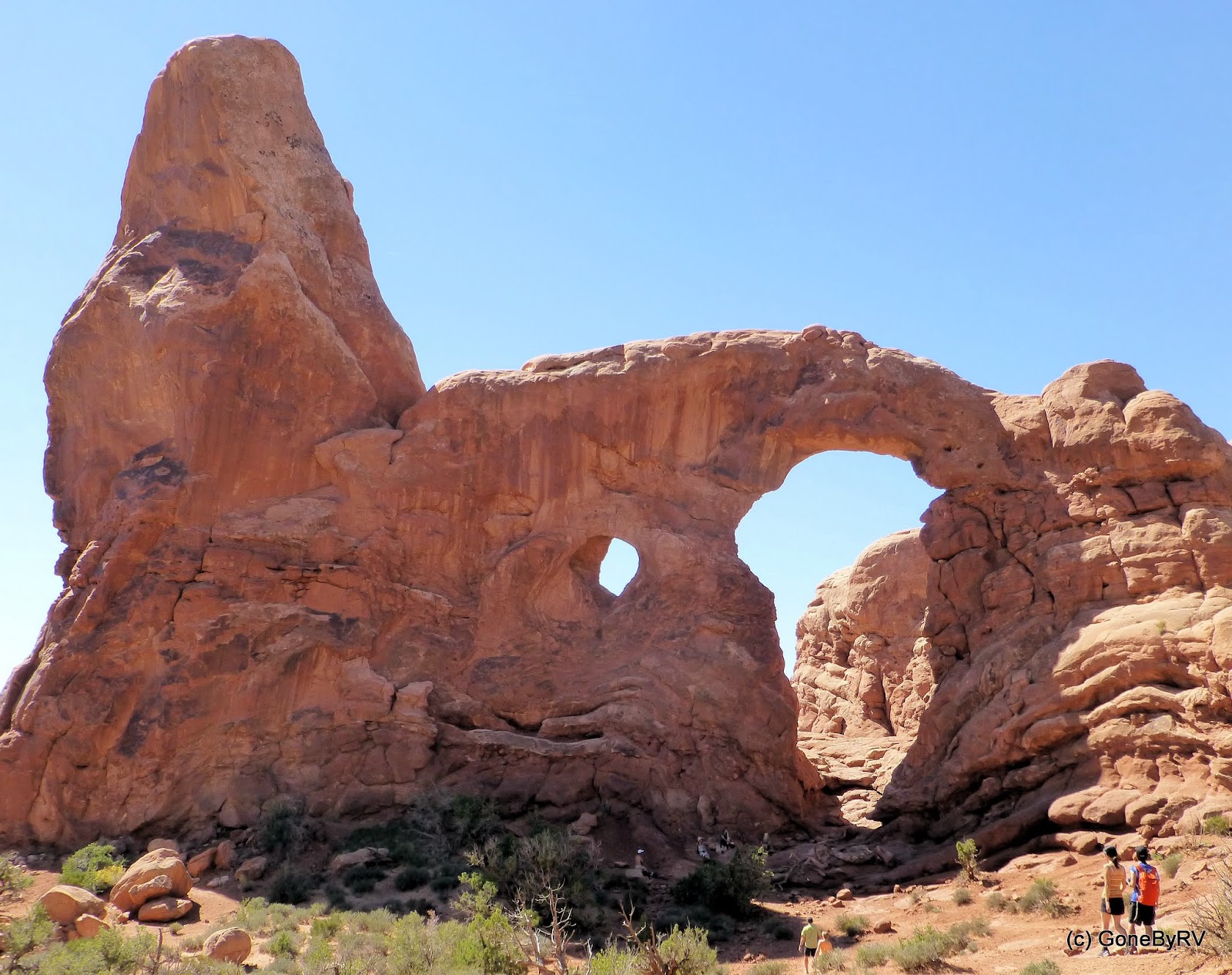 Continuing along the trail, we next came to "Turret Arch".  Some of these formations need a bit of an imagination to visualize. 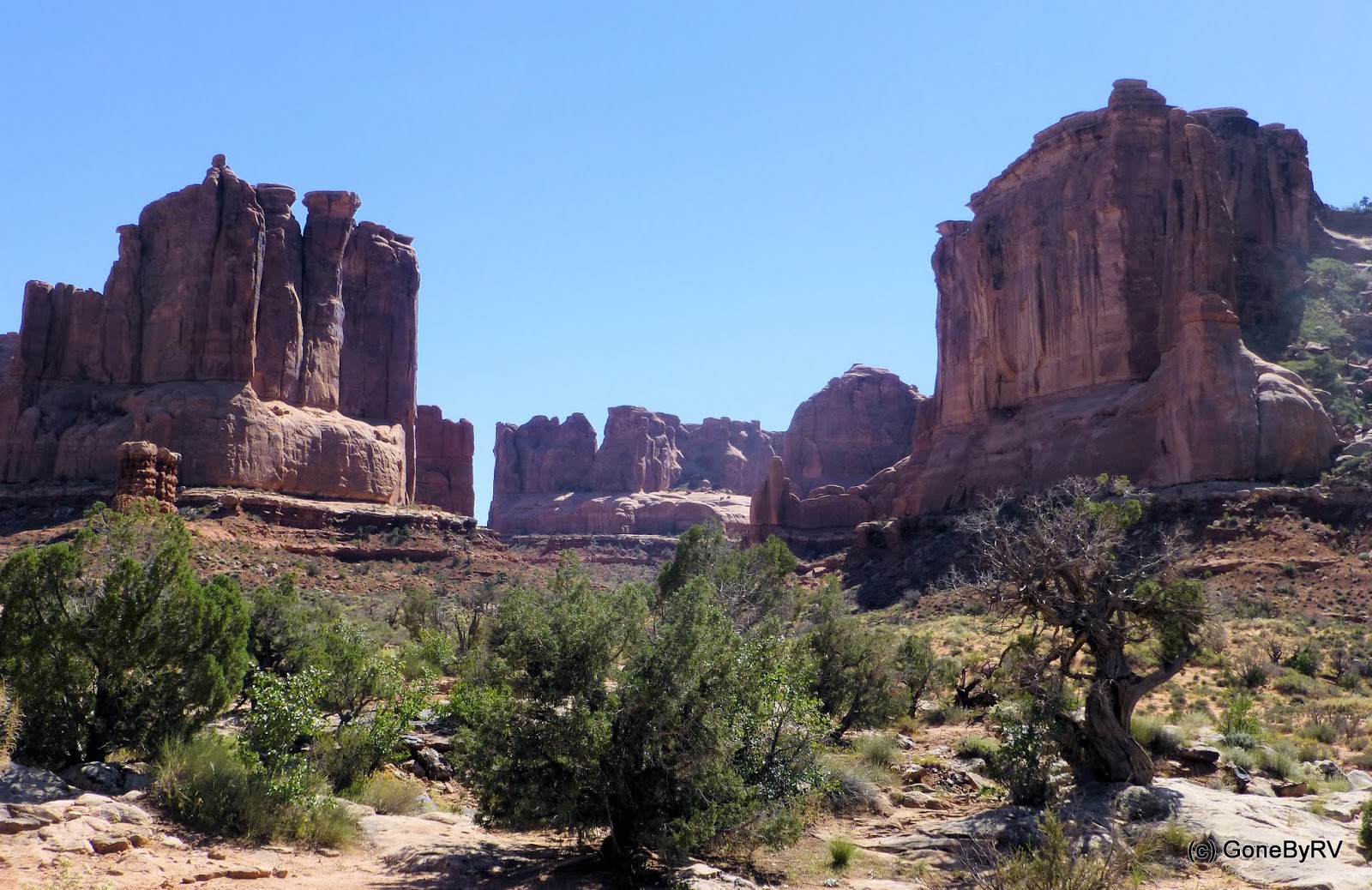 We also decided to hike the Park Avenue Trail before calling it a day.  This trail is listed as 1.0 mile in each direction as has trailhead access at two different points along the park's main road. We decided to begin the hike at the "Courthouse Towers Viewpoint" lot and we were glad we did. The first half of the hike is slowly uphill, so the return trip was much easier. 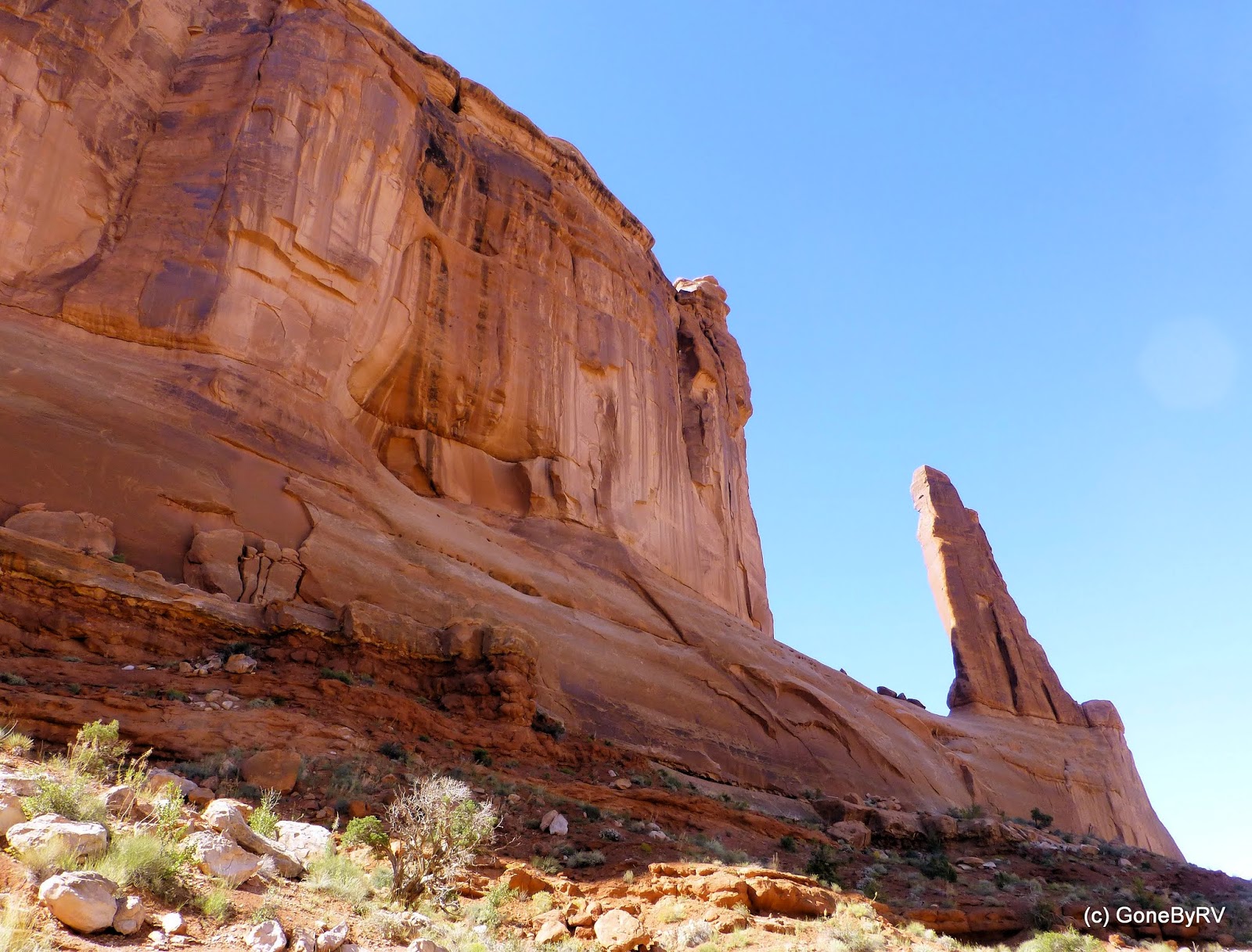 The area was first named "Park Avenue" because early explorers thought that the towering walls and formations reminded them of buildings in New York City. 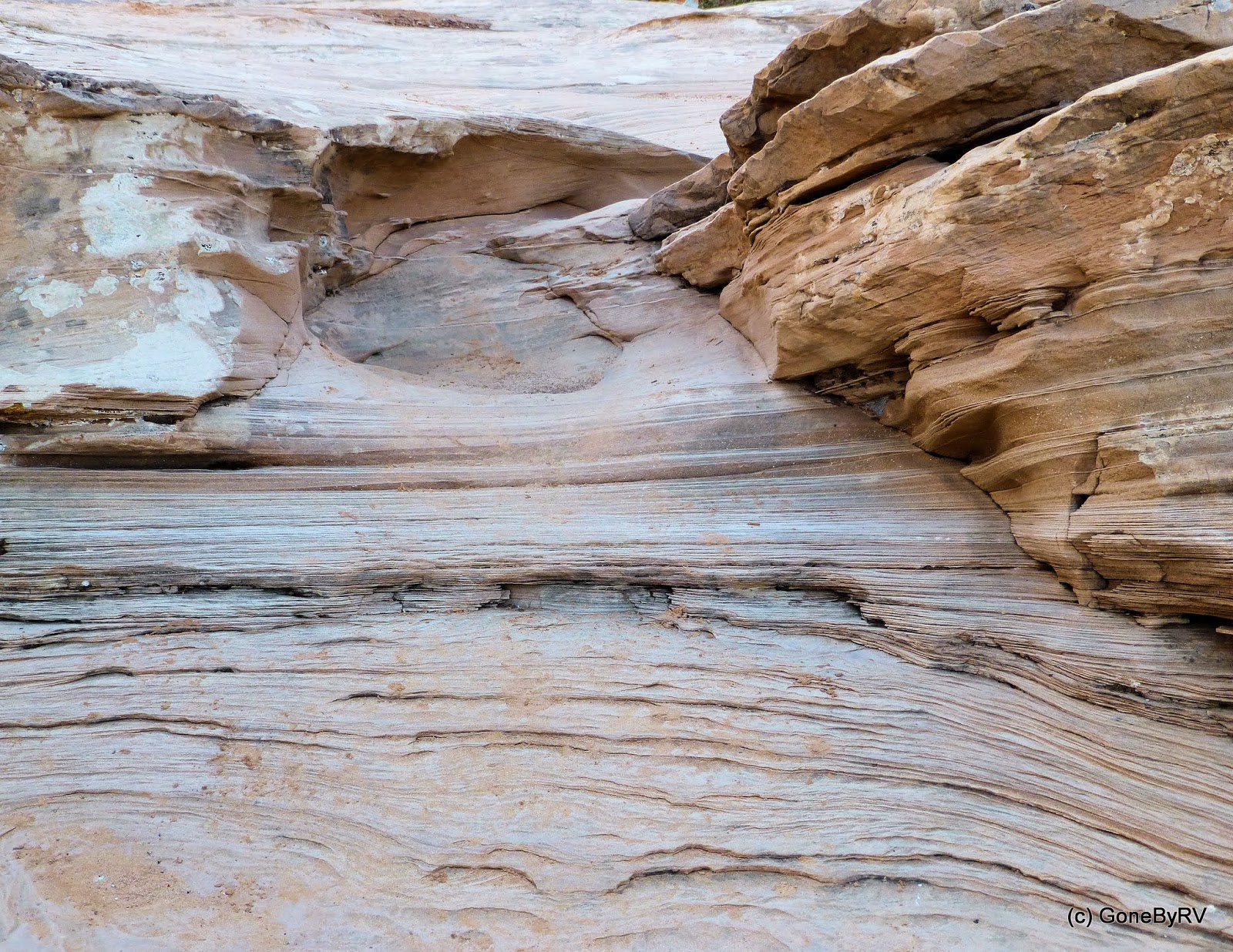 Much of the hike is along a wash which runs thru the area.  There was absolutely no water present today, but the movement of the water on the rocks is beautifully evident as you hike. 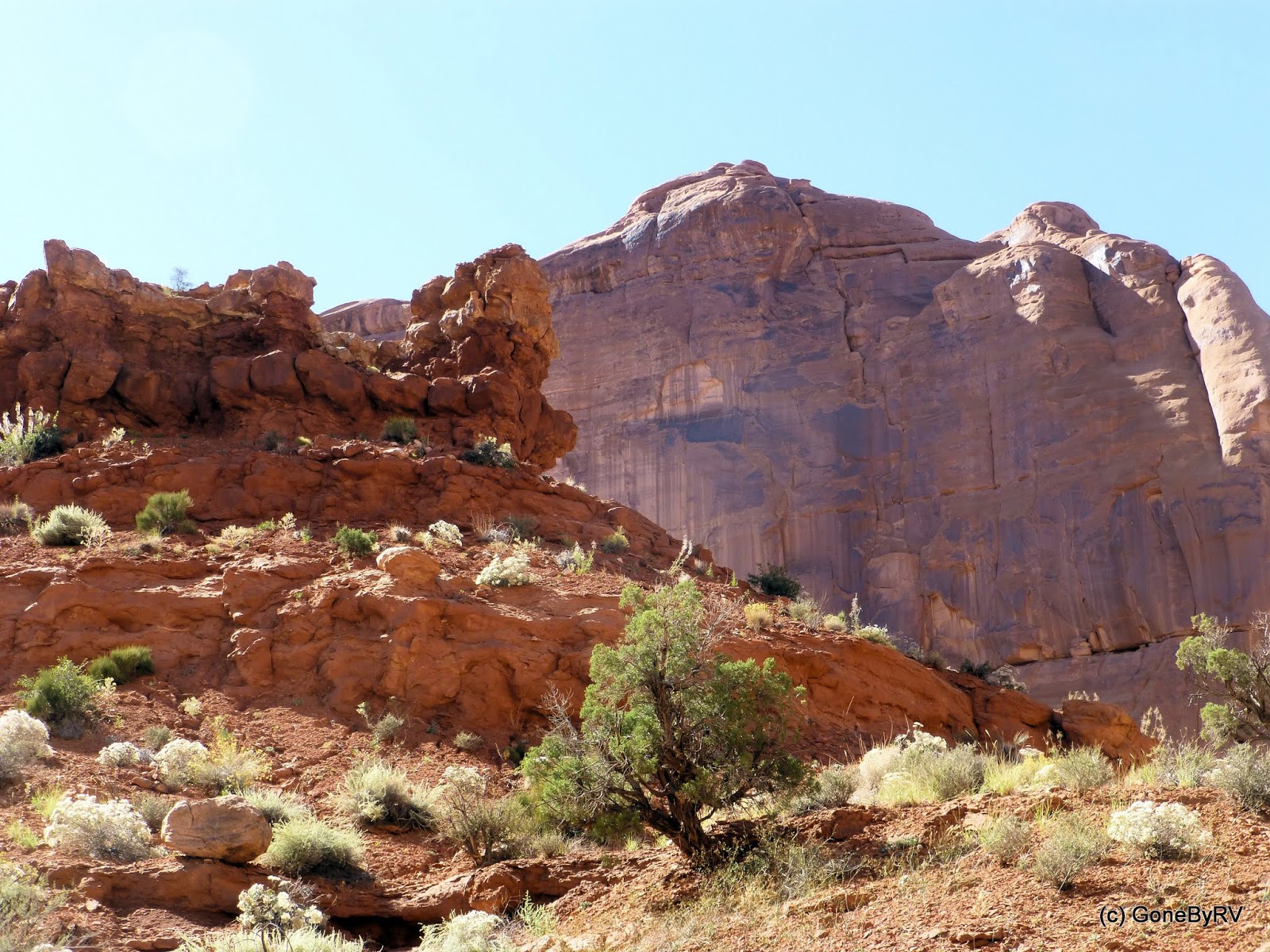 Another view of the walls along the trail.

Our view at the end of our "out" portion of the hike was stunning. This was also near the other parking area for the trail and quite crowded with tourists.  The good thing is that most don't hike the trails, but only take pictures from the top, so the trail wasn't crowded.

It was a good first day of hiking in Arches National Park.  Don't forget to take a look at many more pictures in our Google+ album which didn't make it into today's blog.