Posted from Park City, UT    (Click on Pics to Enlarge) 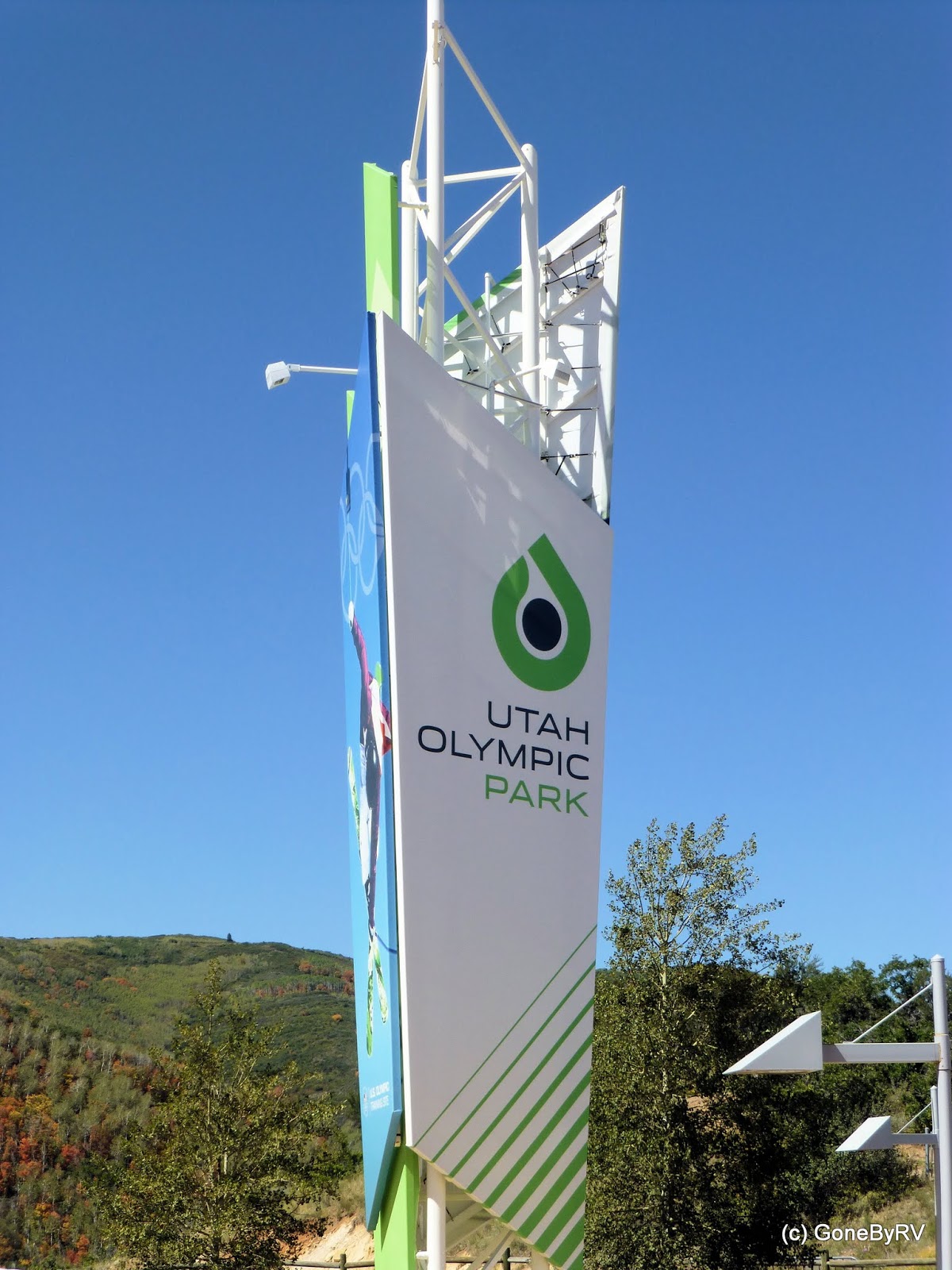 On Tuesday we moved from Arco, ID (elev. 5309 ft.) to near Park City, UT (elev. 6353 ft.).  I mention the elevation change because it's sure a lot cooler up here in the mountains of Utah.  I guess this is a good thing because many of the 2002 Winter Olympic events were held at what is now called Utah Olympic Park only a few miles from our current RV campground. (How's that for a segway?) 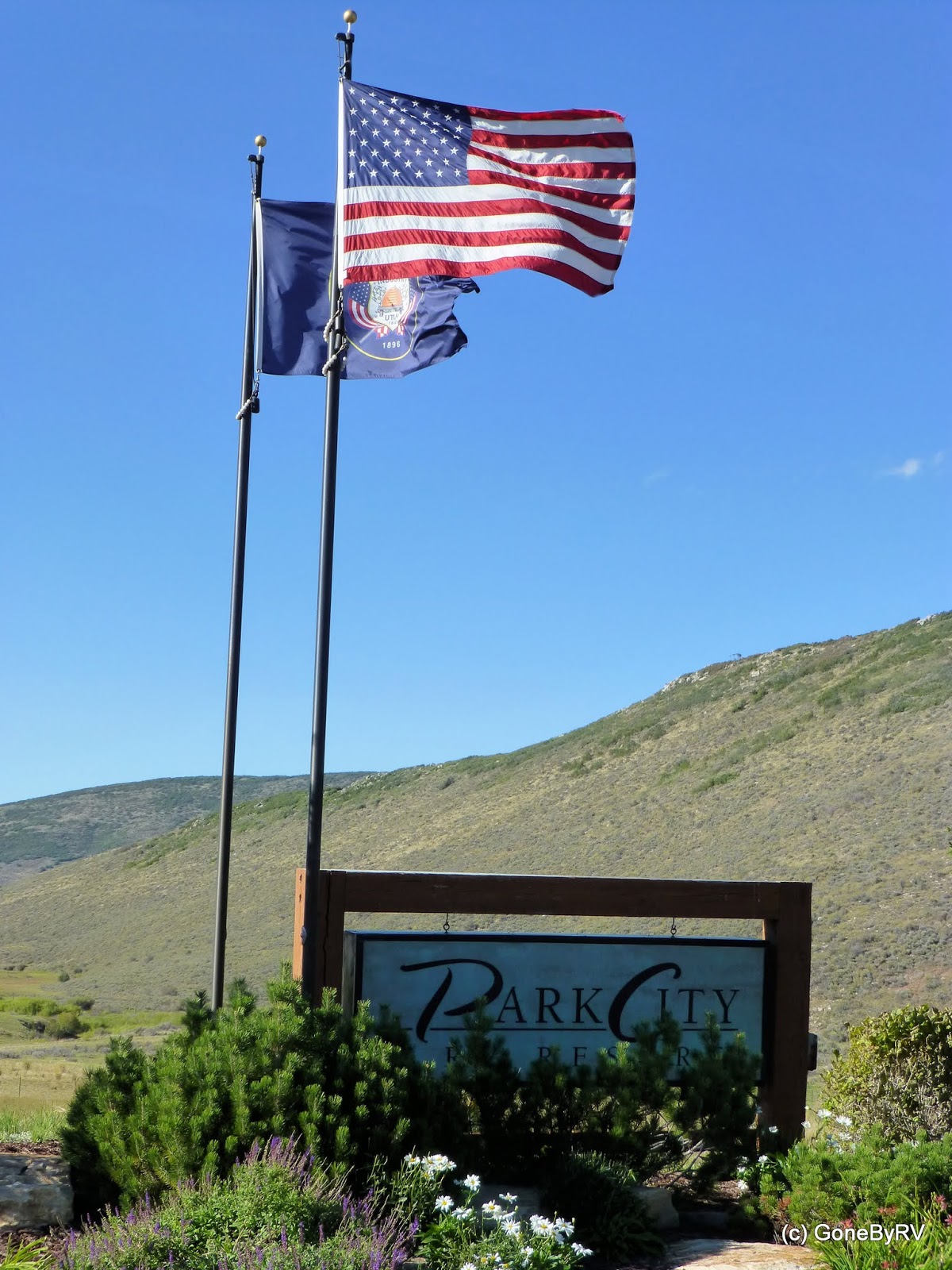 We're staying for the week at Park City RV Resort.  If you ever visit, I would advise staying on the upper level.  All sites are concrete with grass between.  The sites are close to each other, but it seems as though everyone's out playing tourist everyday anyway.

Verizon cell and data signals are very good.  We have a clear view of the sky for satellite as well. We were surprised to see several other Tiffin products in the park. 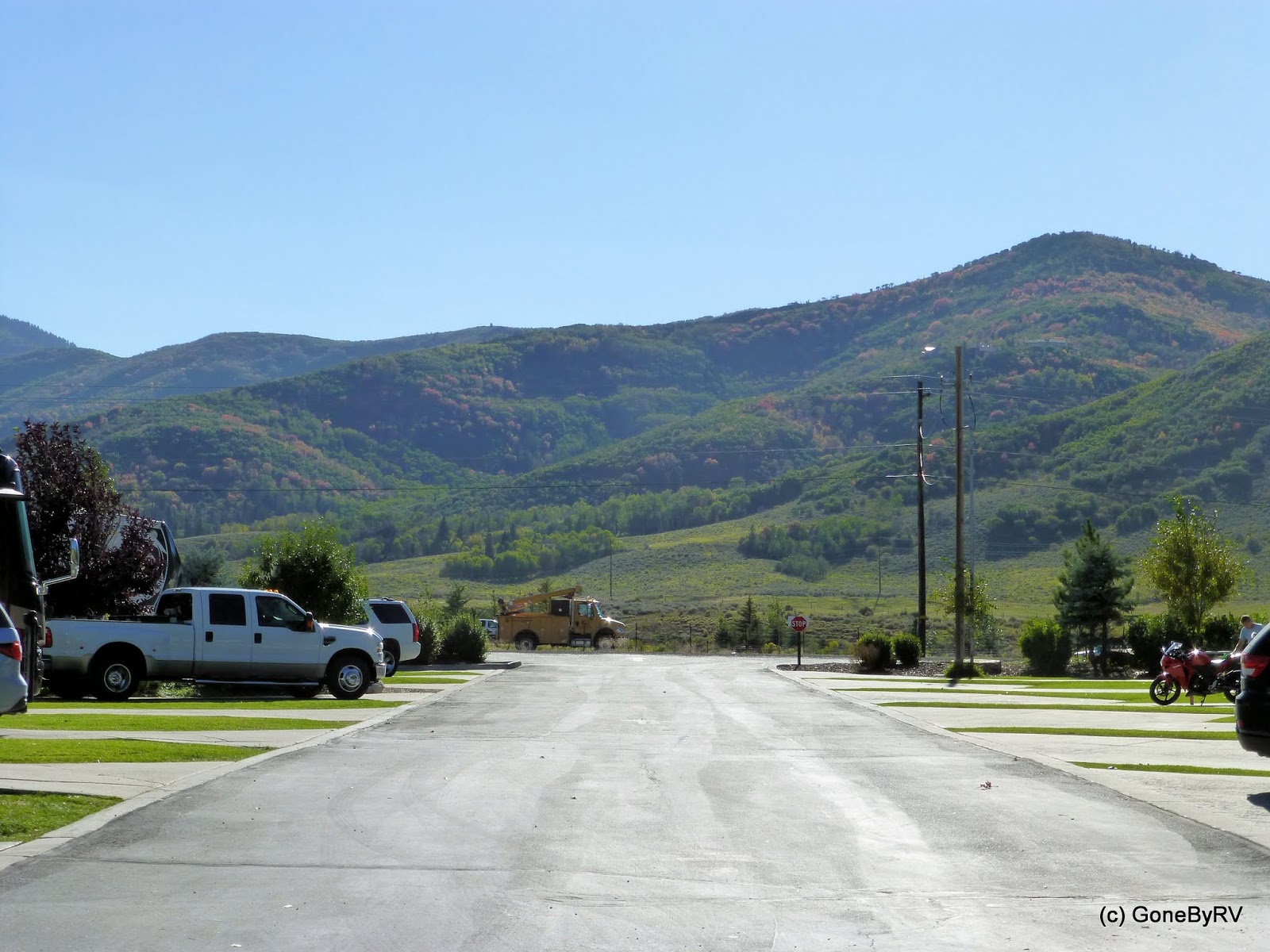 Mountain views are abundant in all directions in the park.  Heck, there's a lot of mountains in this part of the state. 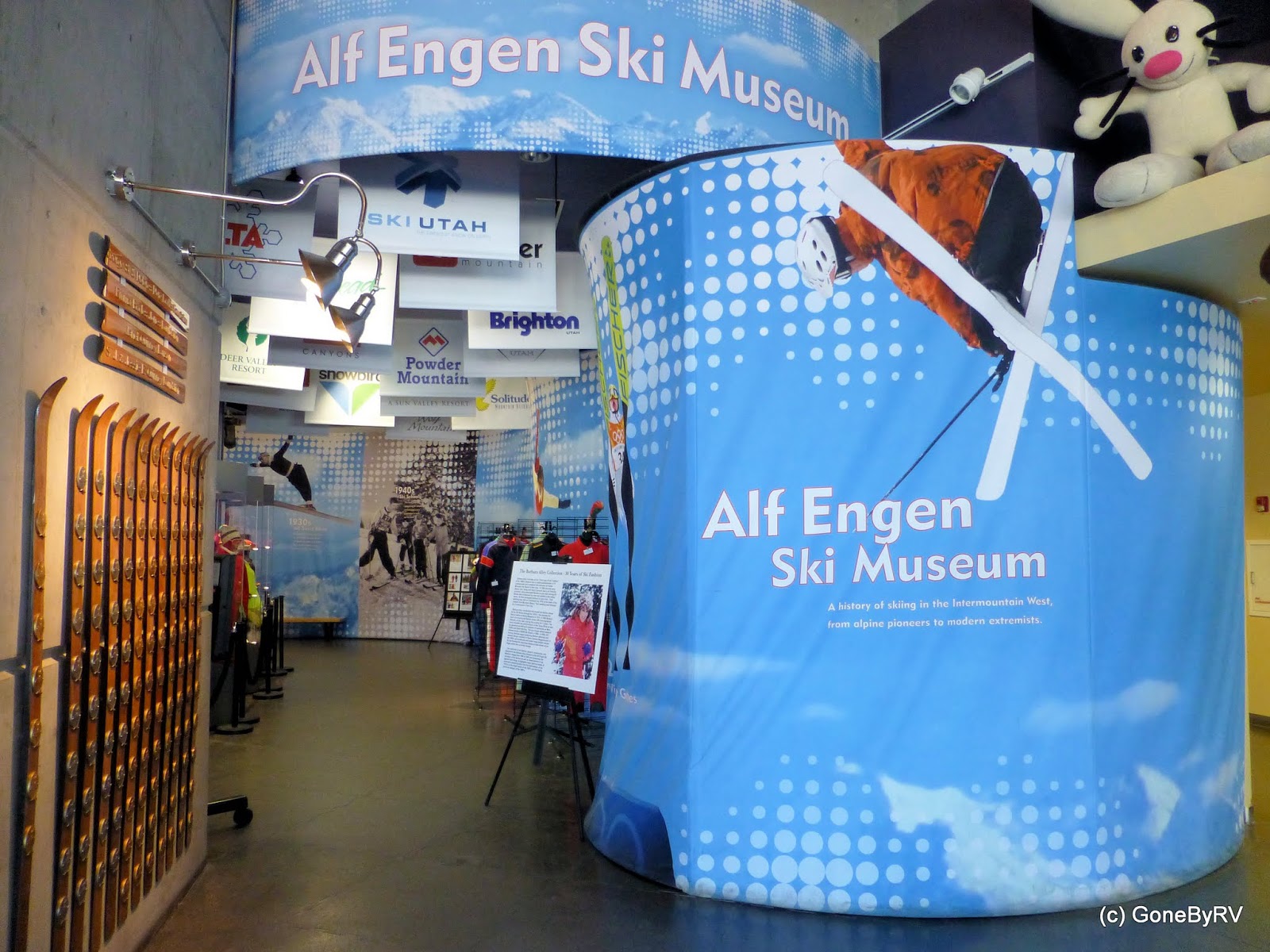 Yesterday we played tourist and went over to Utah Olympic Park.  As mentioned earlier, this was the site of many mountain events of the 2002 Winter Olympics held in Salt Lake City.  It's nice to see that the facility is still being used as an Olympic training center in addition to housing the Alf Engen Ski Museum and the Eccles Foundation 2002 Olympic Winter Games Museum. 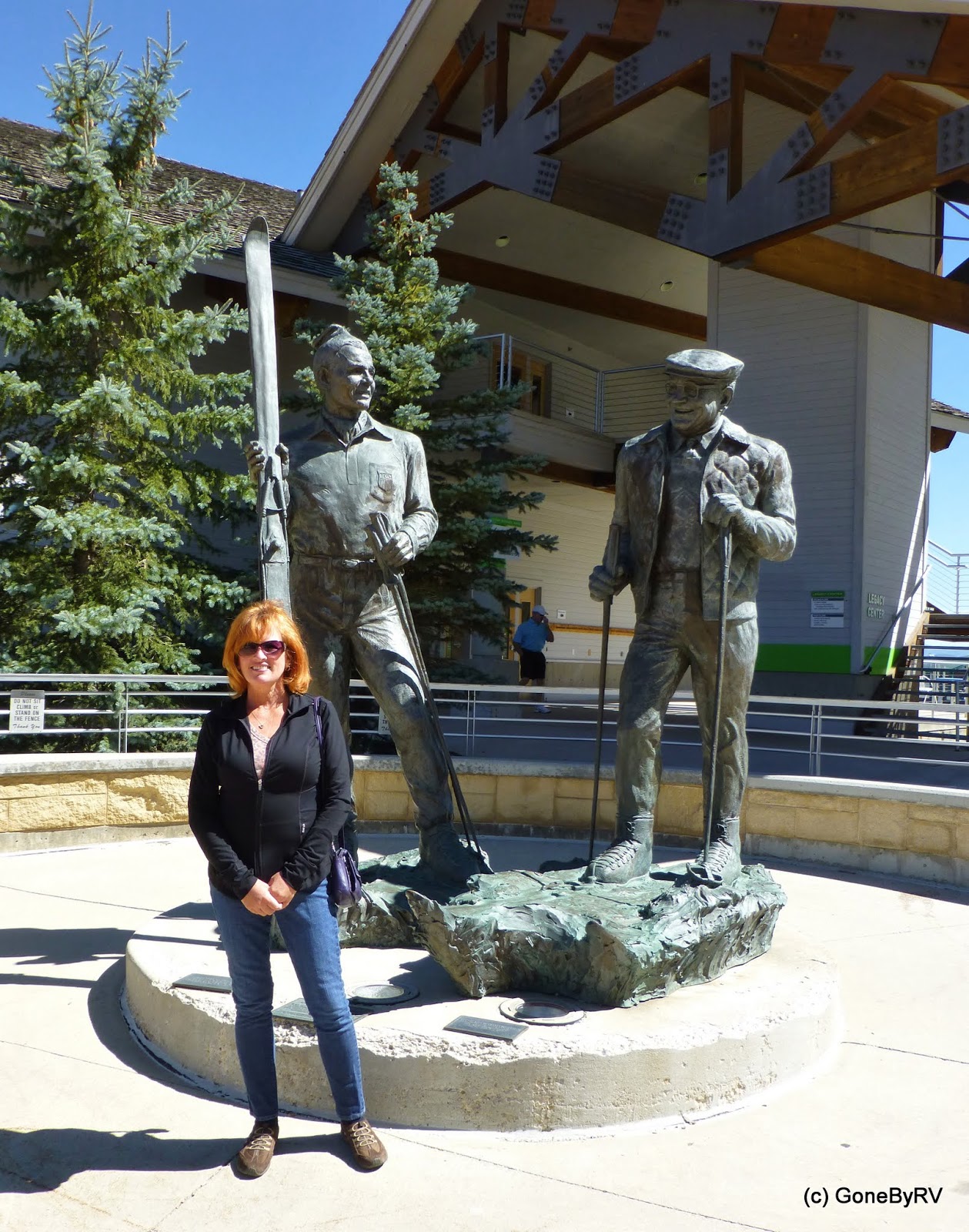 Both of these men were prominent figures in the development of skiing in Utah.  Here's Karen with their bronzes at the front of the facility. 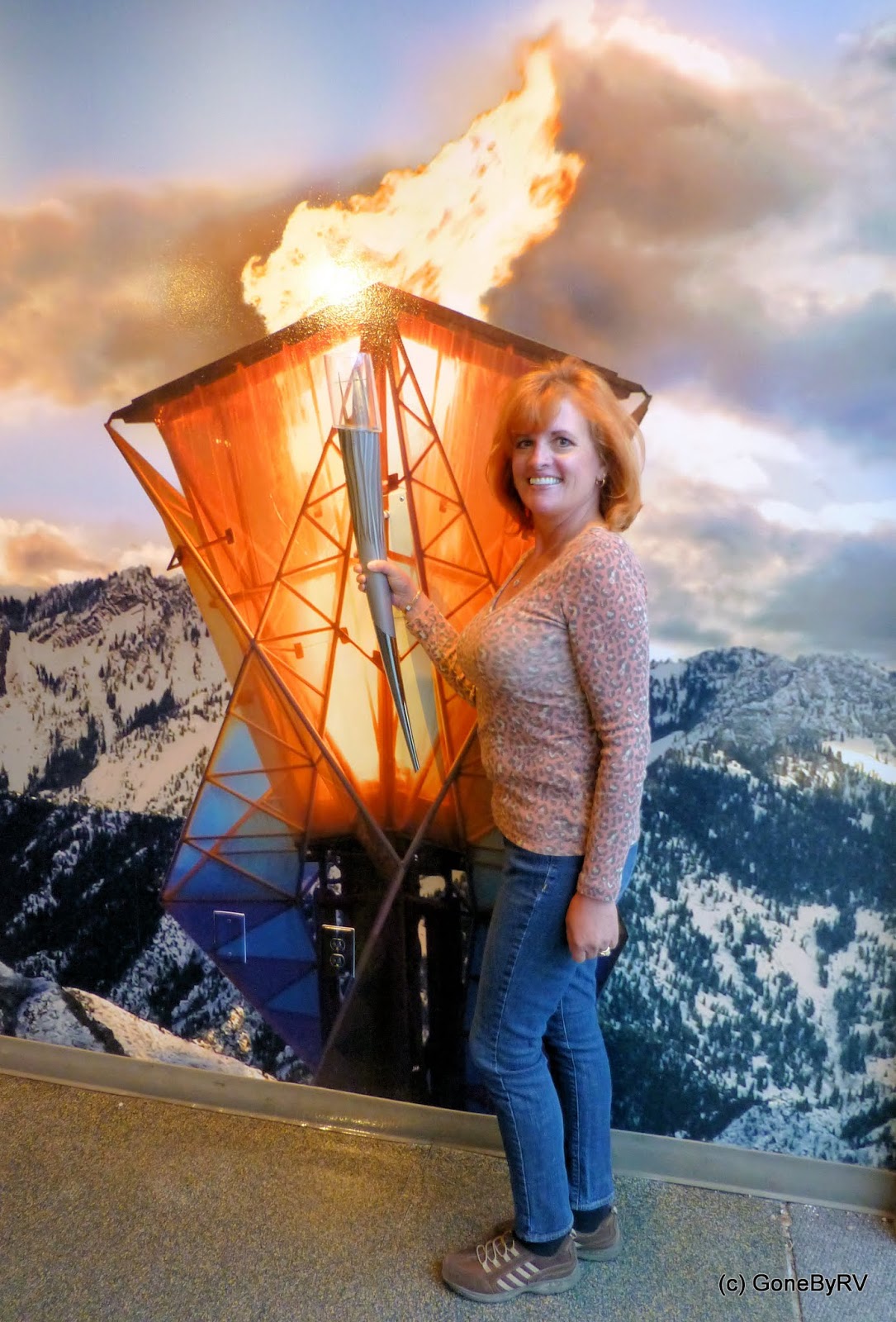 There is a wealth of adventure activities available for a fee, but both of the museums are free to enter.  Also, walking around the facilities is open to visitors.  Although neither of us are really skiers, we found both museums interesting.  Karen had a chance to be photographed with the Olympic flame. (Well, not really, but it looks real.) 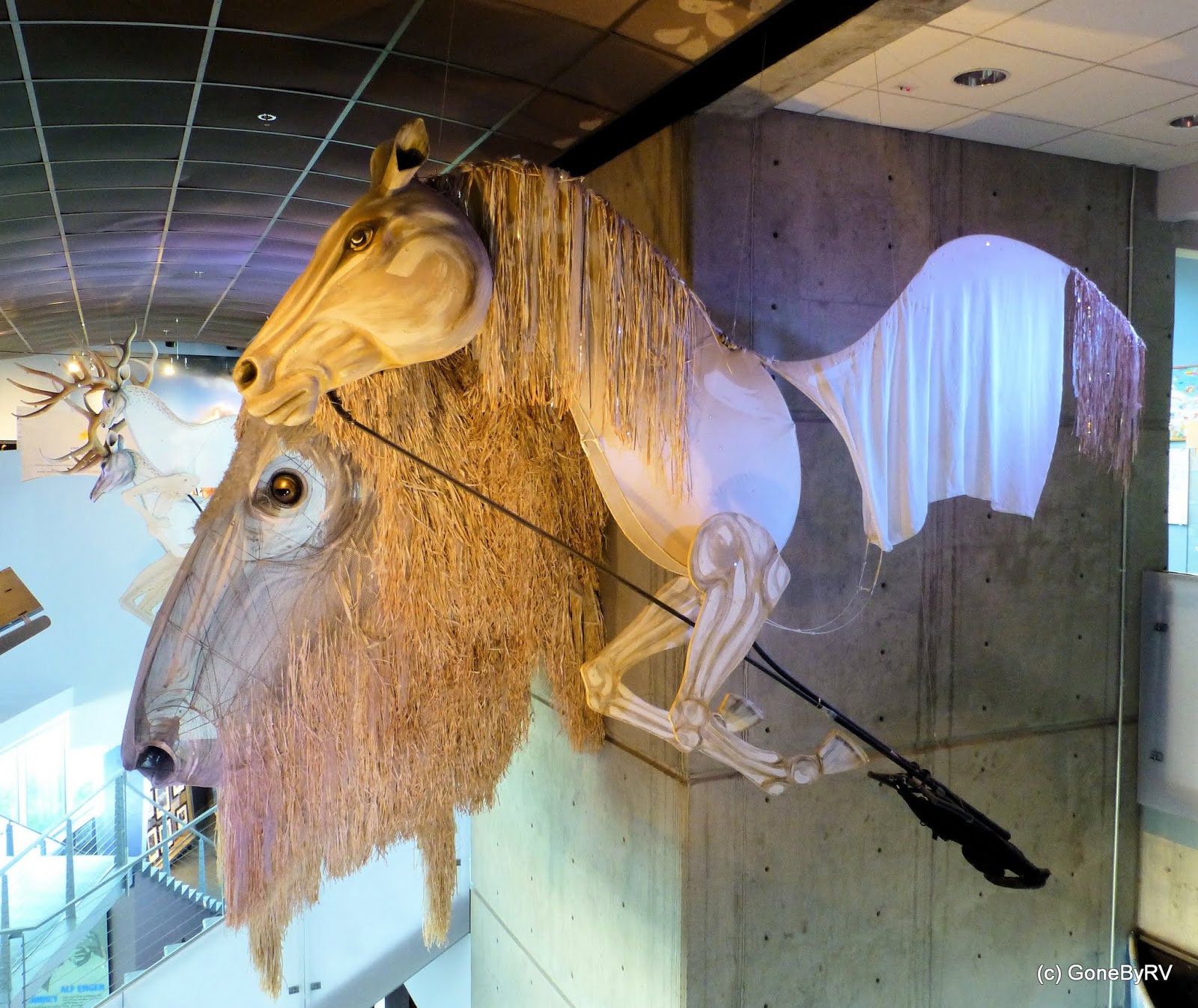 Here are a few of the actual props from the opening ceremonies of the 2002 Games. 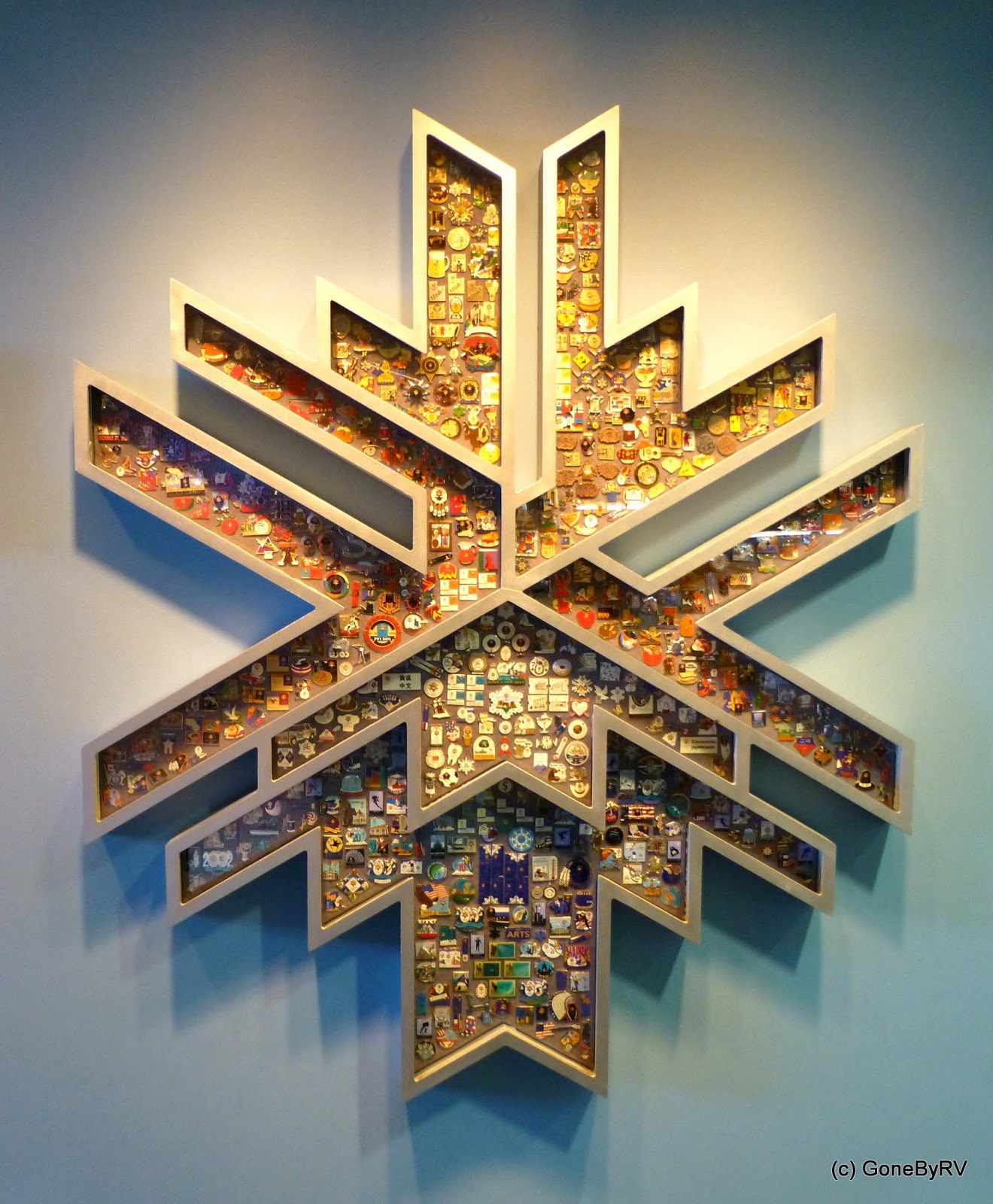 This was the symbol for the 2002 Winter Games.  Inside the symbol is a collection of pins traded by visitors to the Games from around the world. 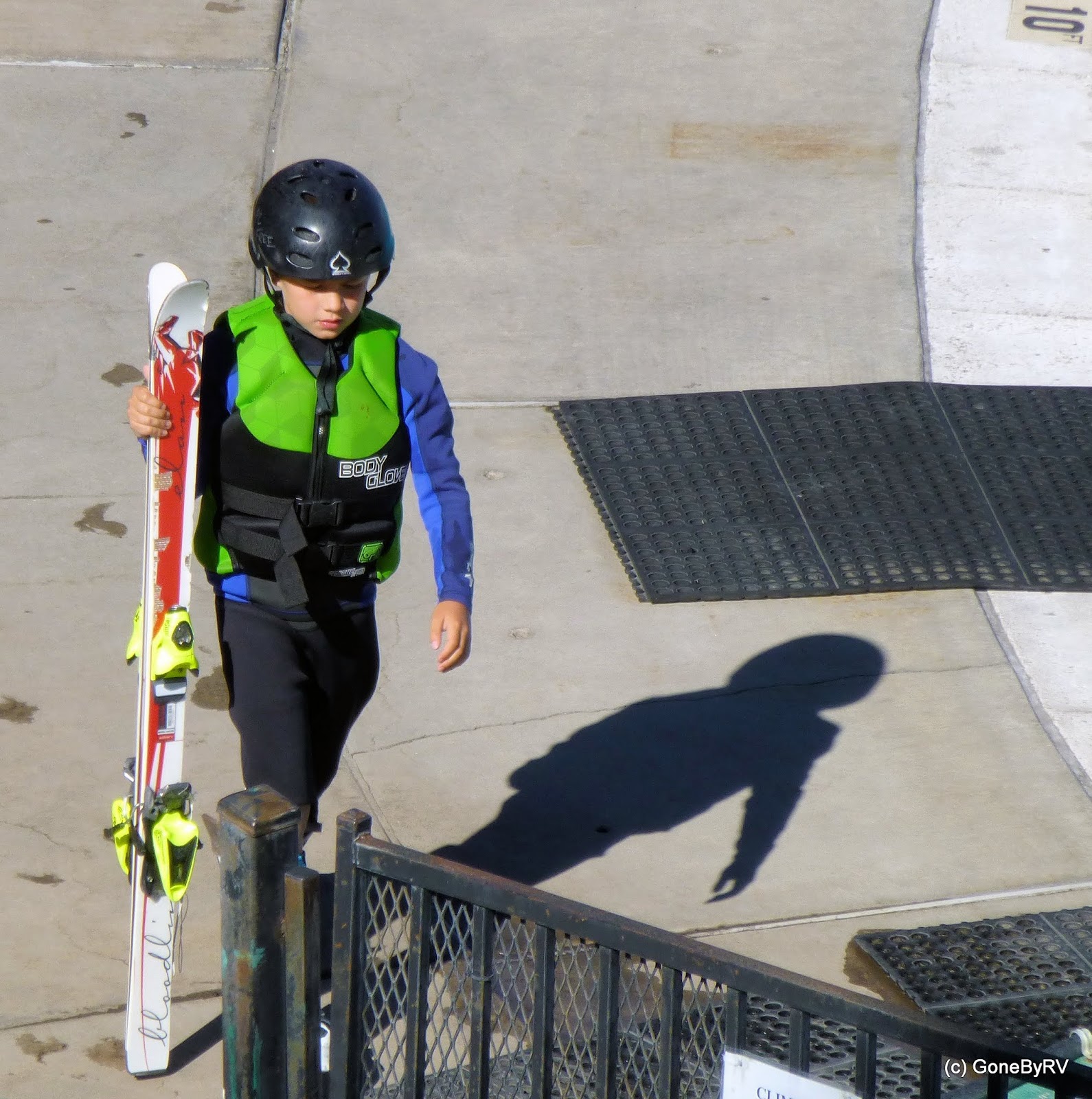 After visiting the museums we went outside to watch some young Olympic hopefuls practicing aerial maneuvers in the pool. Some of these folks were pretty young. 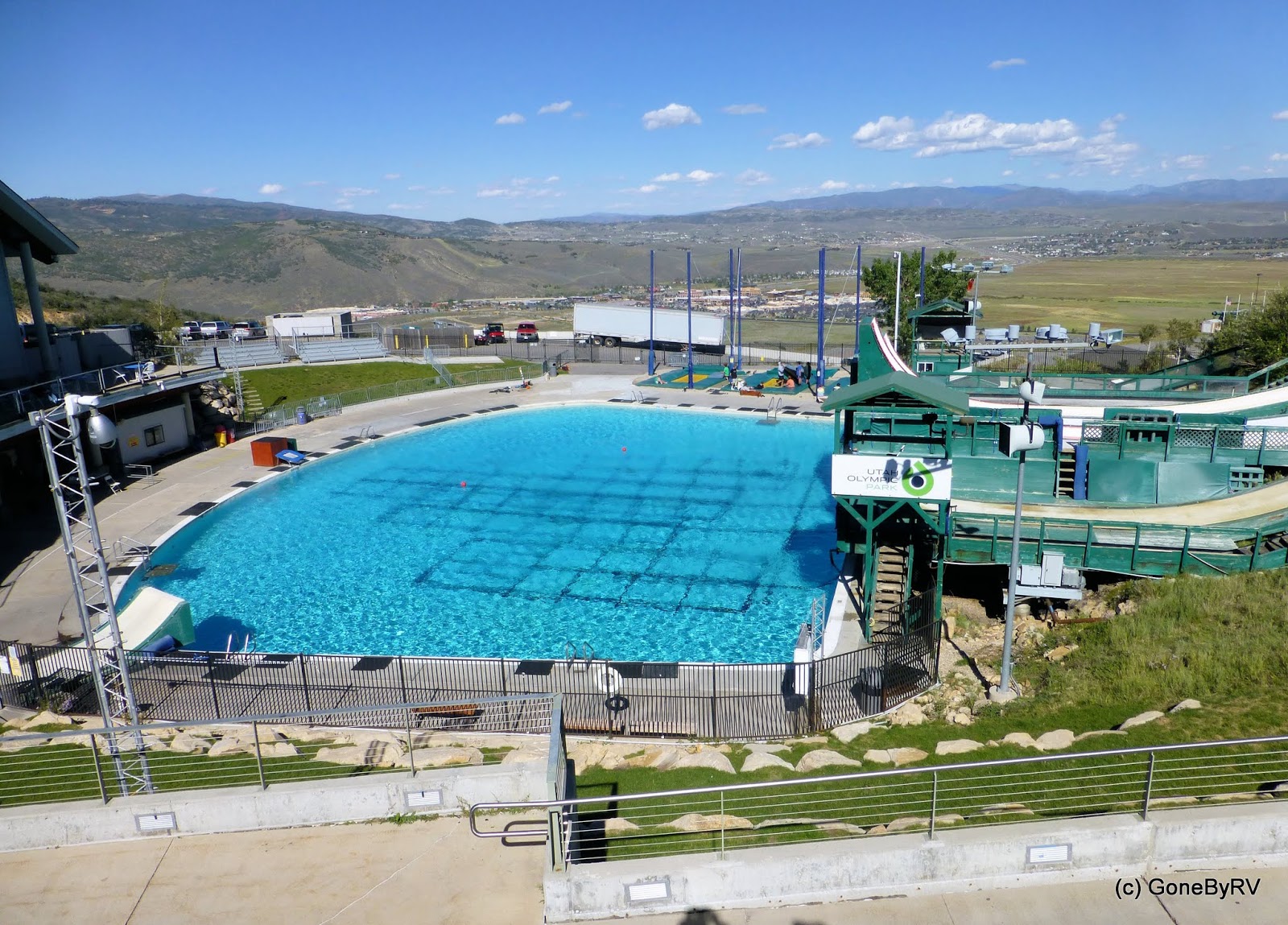 The pool gives persons a chance to practice aerial maneuvers such as flips, rolls, tucks, and other crazy things and land in the "forgiving" waters rather than on a hard packed surface.  In real competitions, these maneuvers are landed on snow.

Here's a short video of several runs showing some of the aerial maneuvers being practiced.  Note the "bubble action" in the pool when the people land.  The grid system in the bottom of the pool is activated as the competitor glides down the ramp to cause air bubbles to rise to the surface and break the surface tension for a softer landing.

(The video is best viewed in 1080p and full screen view) 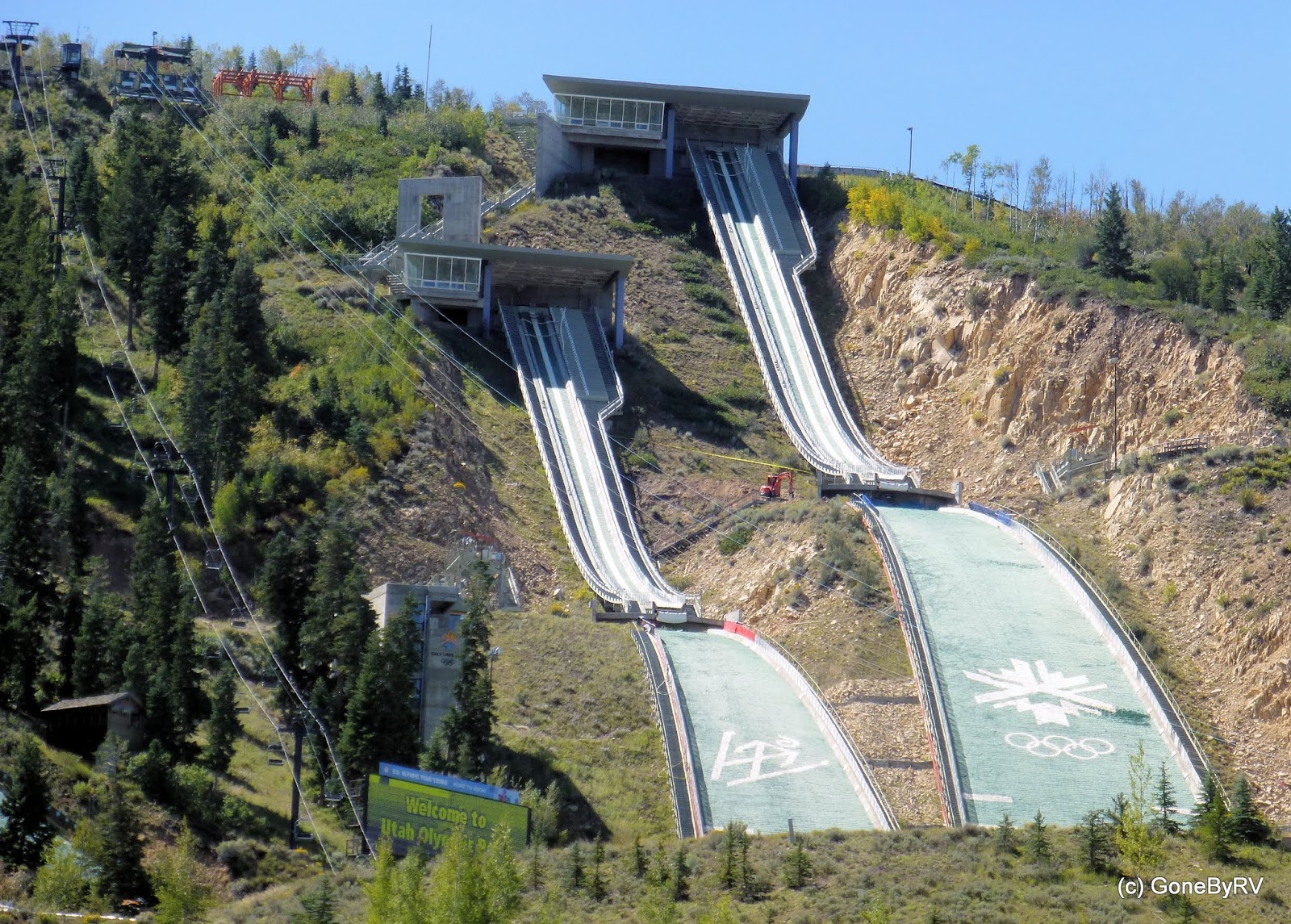 After watching the jumping for awhile, we decided to take a 1-hour bus tour of the complex.  The first stop was at the base of the K90 and K120 ski jump hills.  I can only say that I have a new appreciation for the courage of those persons jumping off the hill. 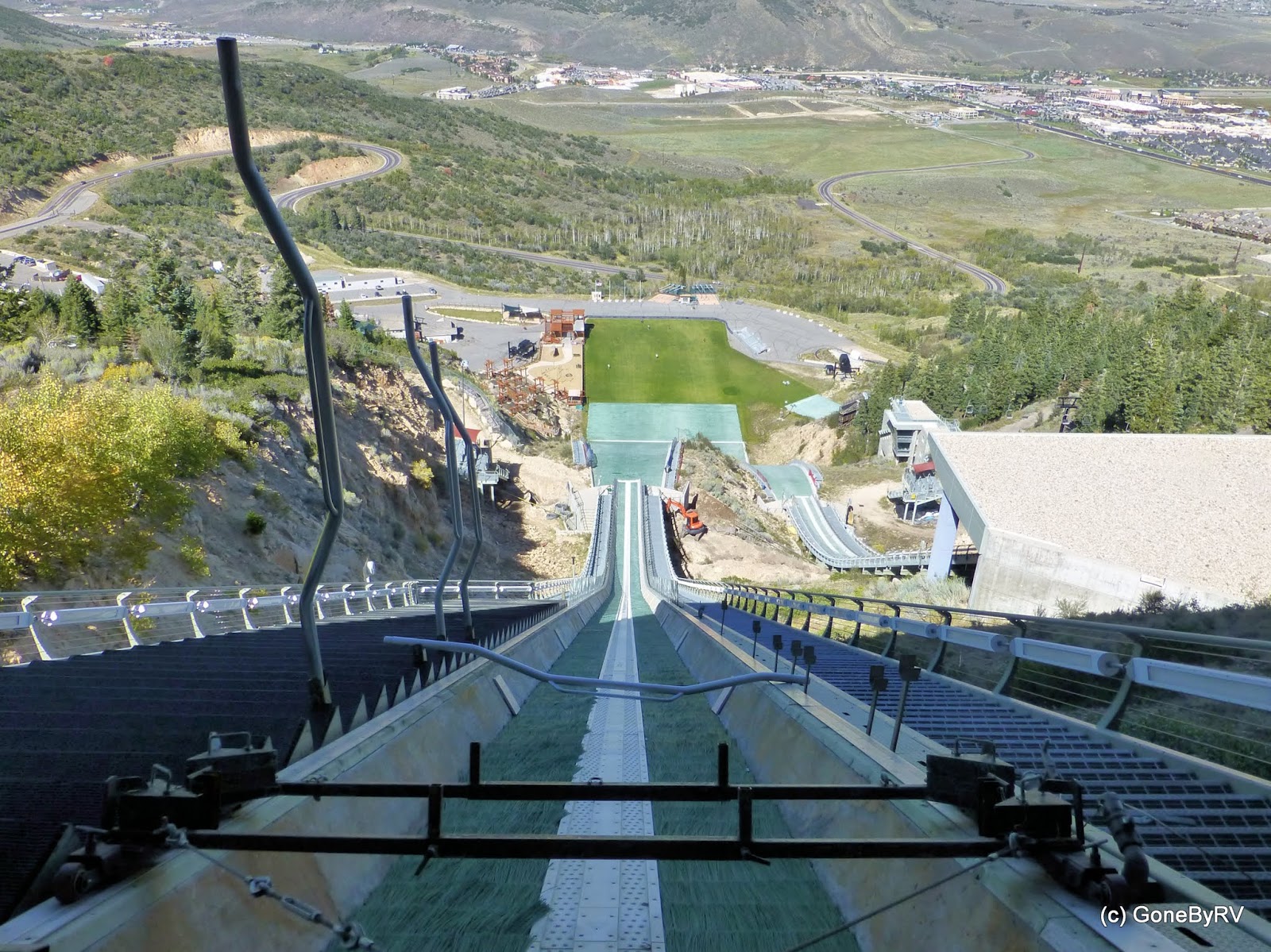 If it looked scary from below, take a look at the jump from the start house at the top.  Sorry, but I'm too chicken to have tried this even in my younger days. 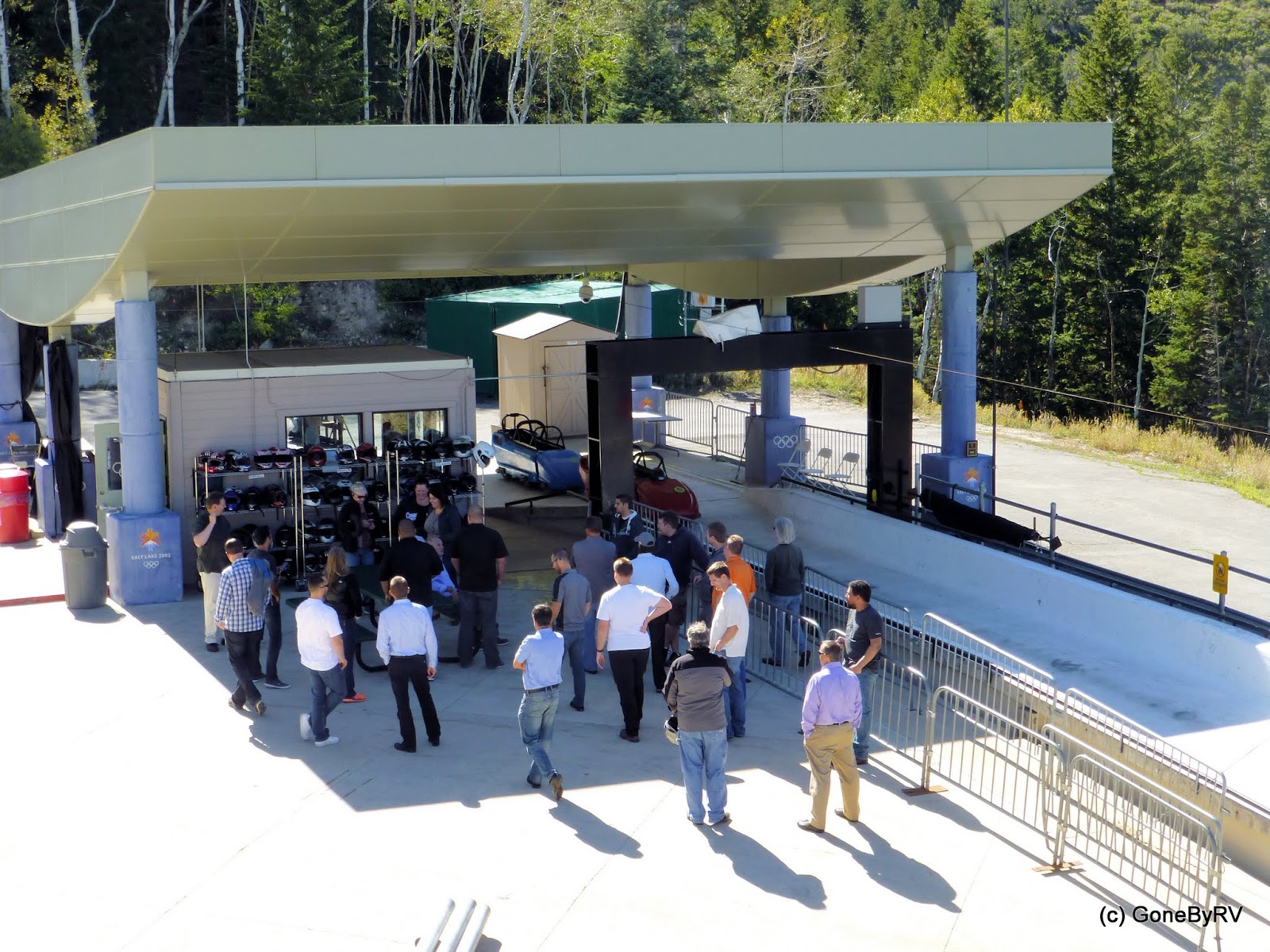 We were taken over to the start house area for the bobsledding event.  During the summer, you can buy a ticket to take a ride with an experienced driver in a 4-man bobsled.  Even during these runs, speeds of 65 MPH are reached and acceleration factors of "4g s" are experienced. 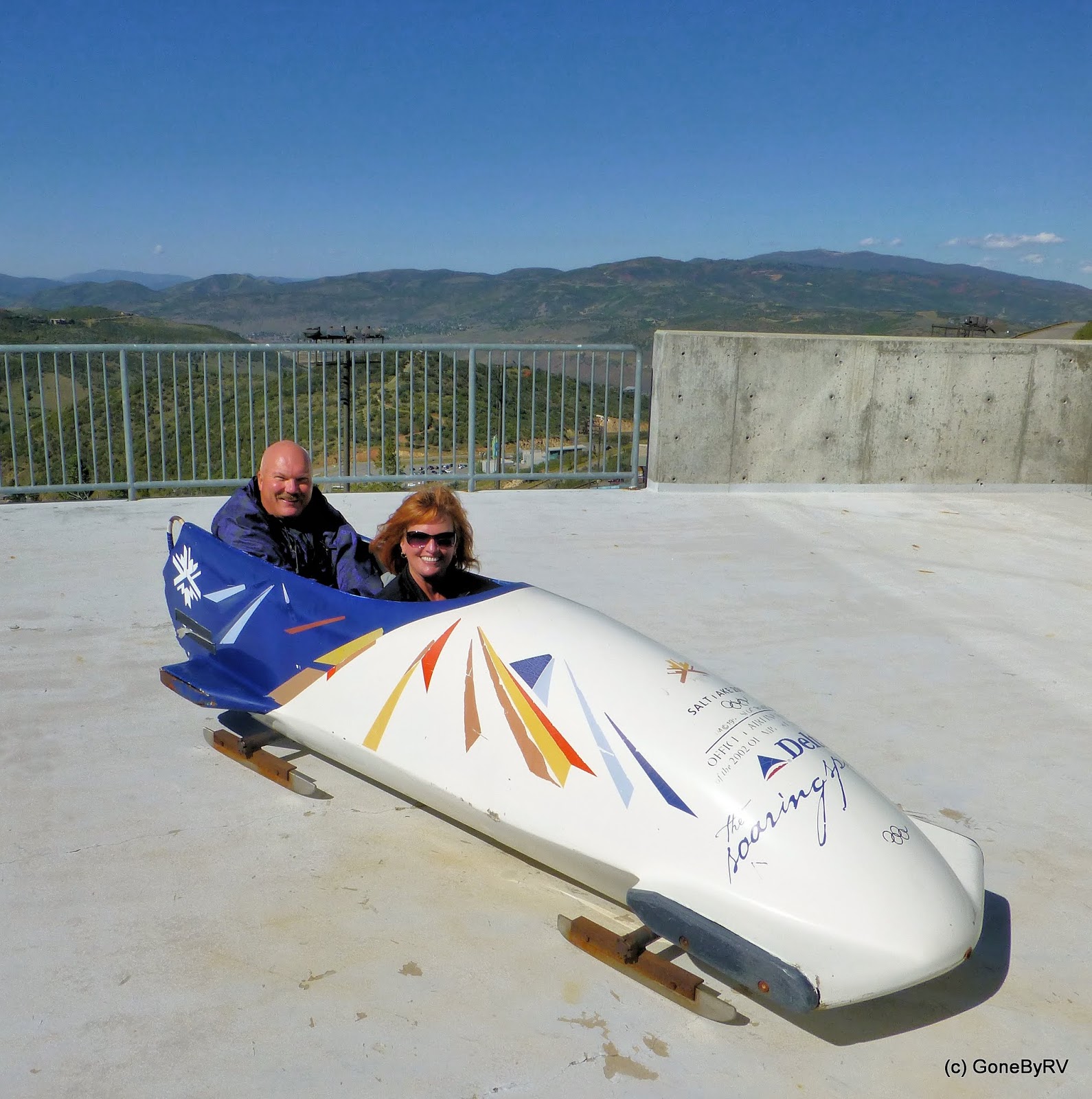 Karen and I were not so bold, but we did have our tour leader take a picture of us in a bobsled. Probably as close as we'll ever get!

If you ever get a chance to visit the Utah Olympic Park Training Center, it's well worth your time. It's somewhat hard to imagine all of the spectators and stands which were in place when the Olympics were underway.  This place must be heaven for folks who like outdoor winter activities.

Thanks for stopping by to take a look!
Posted by Steve and Karen at 12:33 AM