Posted from Moab, UT  (Click on Pics to Enlarge)

On Friday we decided to take a break from Arches National Park and branch out a bit to see other attractions in the area.  We had been referred to Dead Horse Point State Park by several blog readers, so off we went. This Utah state park is located off of Rt. 313, the same route you'd take to enter the northern  section of Canyonlands National Park.

Ok, before I get into today's blog and pictures, you're probably wondering how this park got its' name.  I know I was.  Let me just cite the Wikopedia origin of the name.  This is also the story put forth in the visitor's center at the park.

From Wikopedia:
According to one legend, around the turn of the century the point was used as a corral for wild mustangs roaming the mesa top. Cowboys rounded up these horses, herded them across the narrow neck of land and onto the point. The neck, which is only 30-yards-wide, was then fenced off with branches and brush.
This created a natural corral surrounded by precipitous cliffs straight down on all sides, affording no escape. Cowboys then chose the horses they wanted and let the culls or broomtails go free. One time, for some unknown reason, horses were left corralled on the waterless point where they died of thirst within view of the Colorado River, 2,000 feet below. 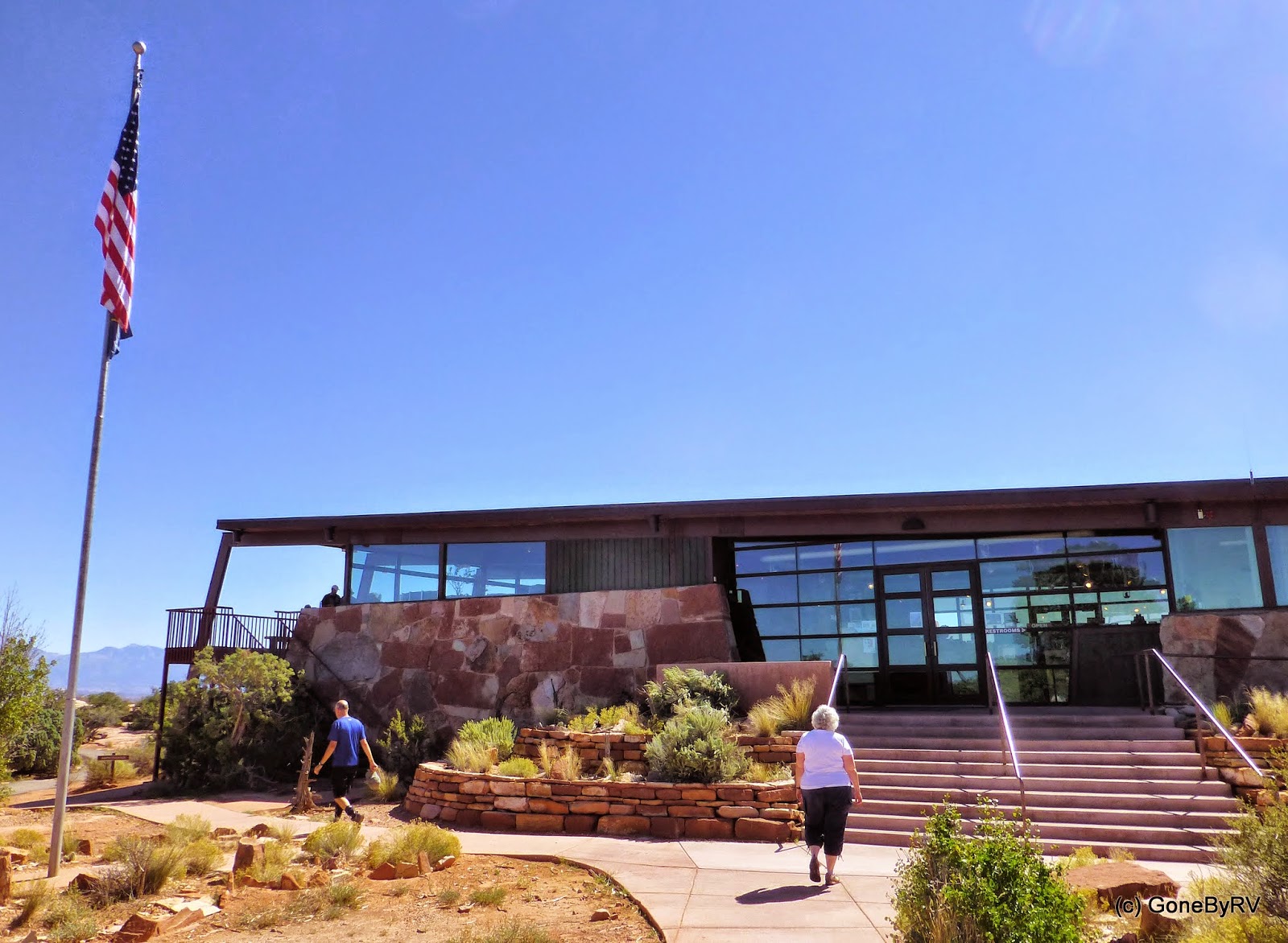 First, a trip to the visitor's center was in order to get an overview of the park and pick up a trail map. 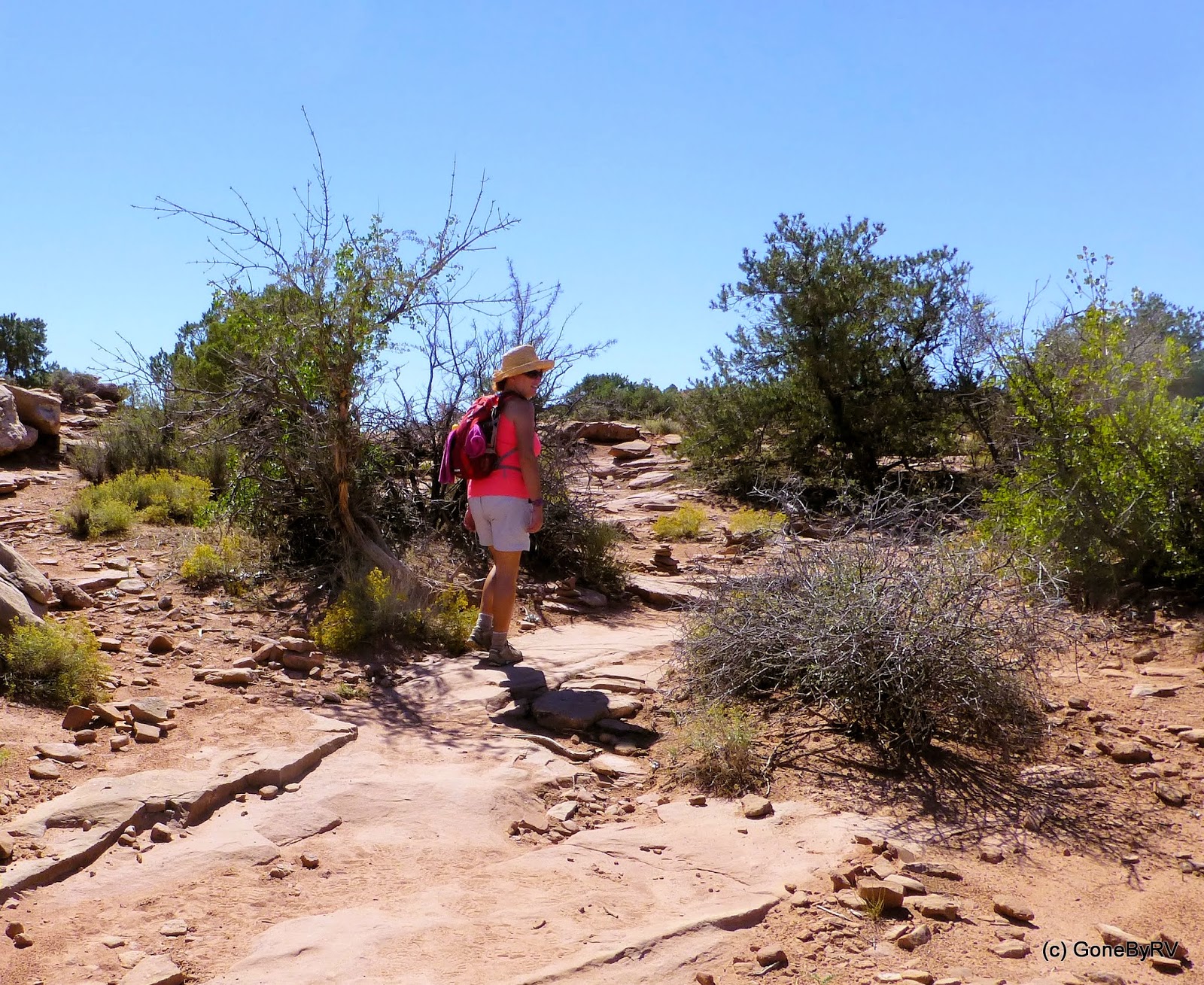 We initially decided to just hike the East Rim Trail and return the same way to the visitor's center because it was only 1.5 miles each direction. By the time we got to the Point, we changed our minds and took the 2.5 mile West Rim Trail back.  I'm glad we did because of the different views. Here's Karen starting out on the trail. 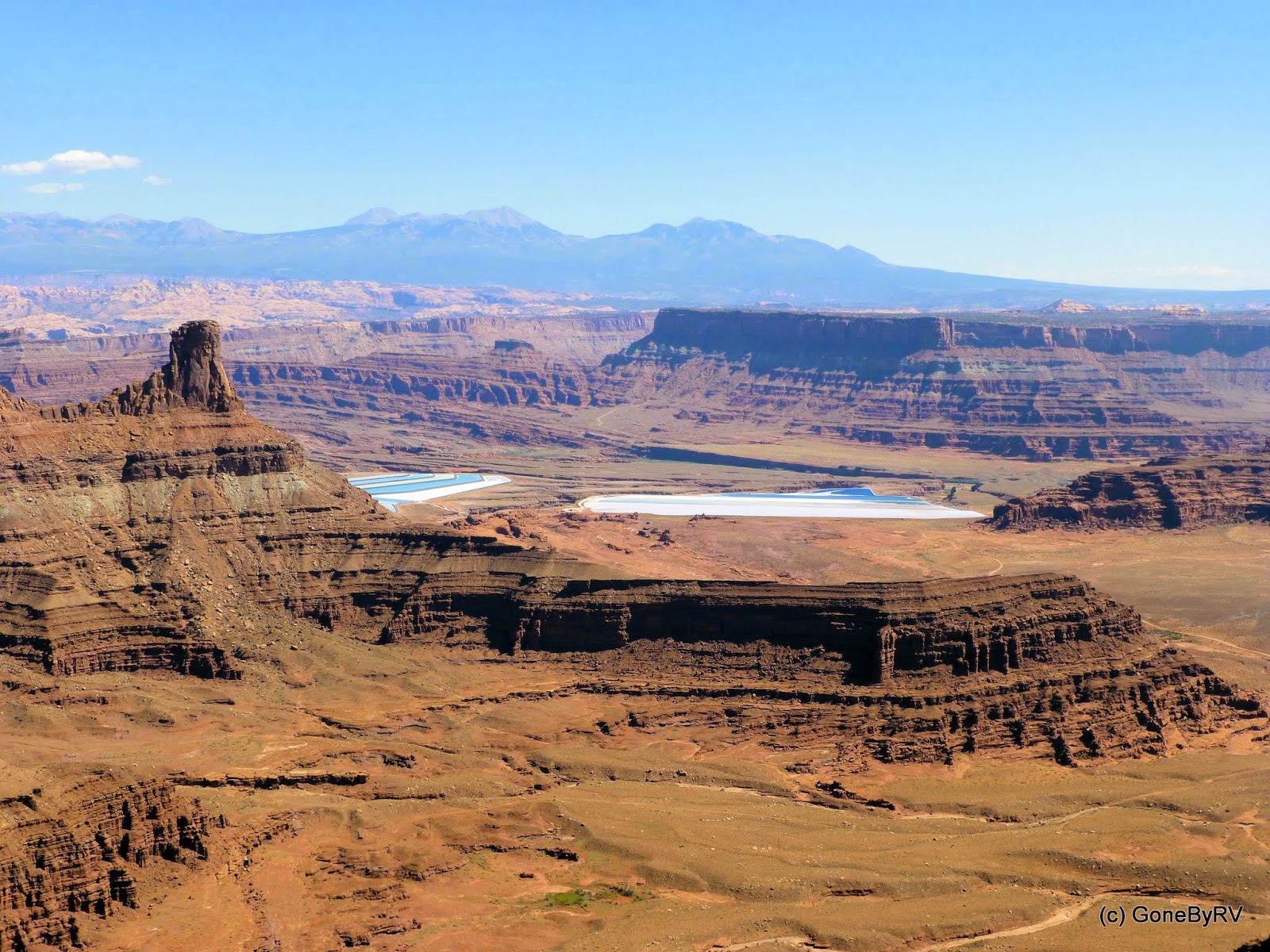 The first views we had over the east rim were pretty impressive. The blue ponds in the distance are potash ponds. 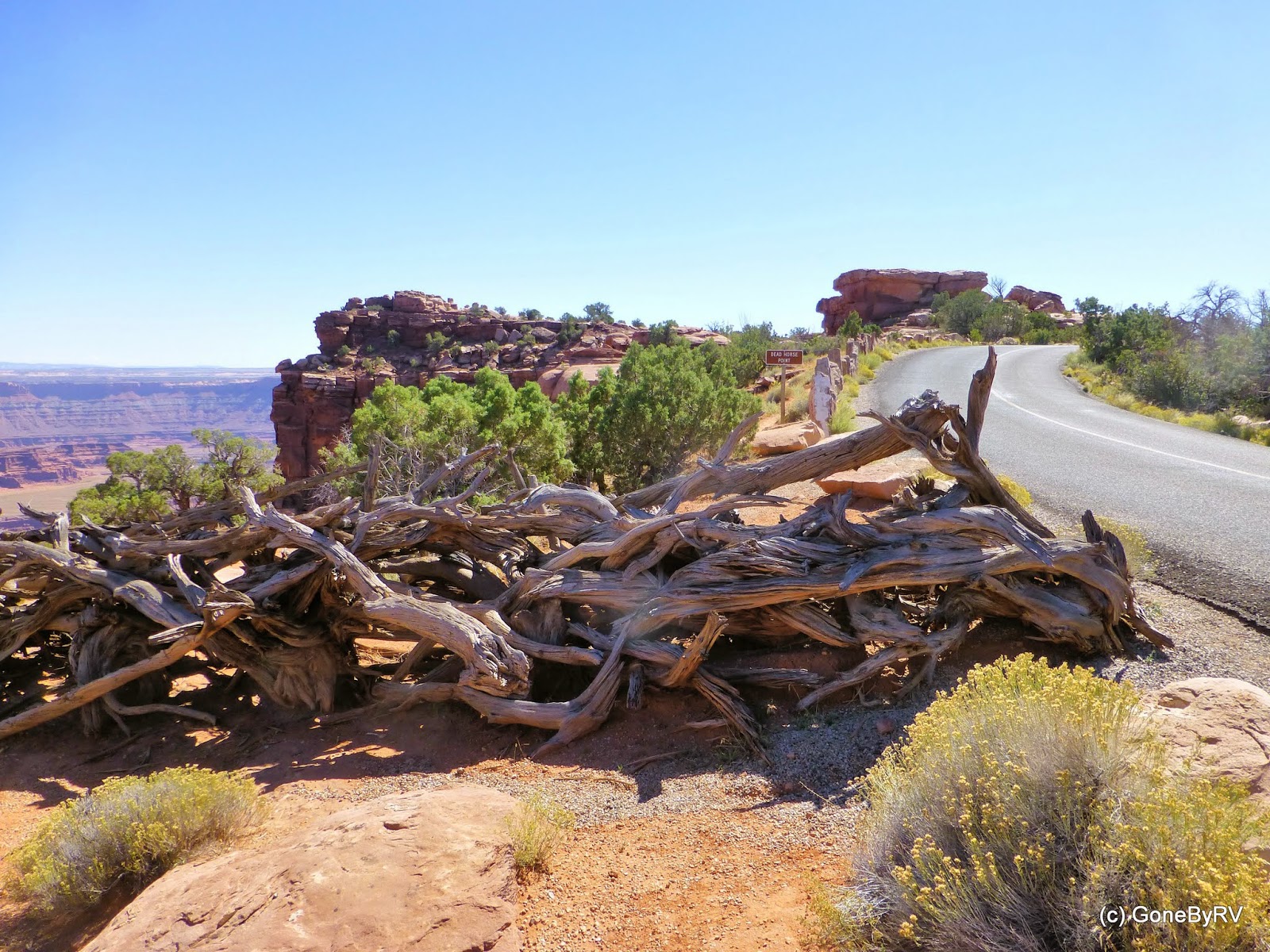 As we neared the Point, a re-created brush line has been set in place to show how the cowboys closed off the area to enclose the wild horses.  Remember, the area is separated from the main plateau by an area only about 30 feet in width.

Rather than show multiple pictures looking off the edge of the Point I shot a short video to give everyone a better feeling for the depth and distance of this area. 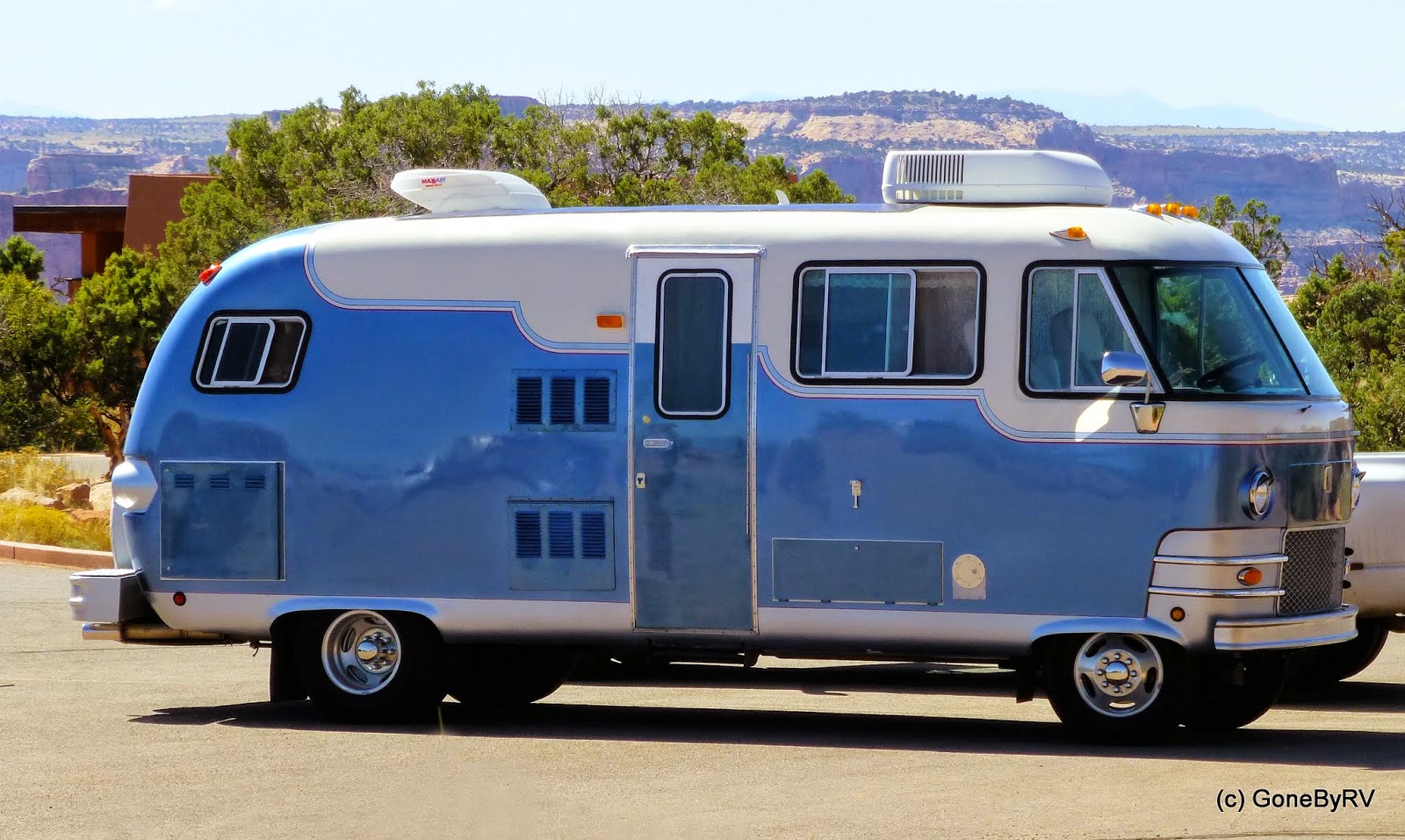 Of course, if not interested in hiking, you can drive all the way to the end of the Point.  There were a couple of tour buses which had just "unloaded" prior to our arrival.  There was a pretty neat looking restored RV in the lot.  Anyone have an idea who made this?  All of the identifying decals and maker marks had been removed. 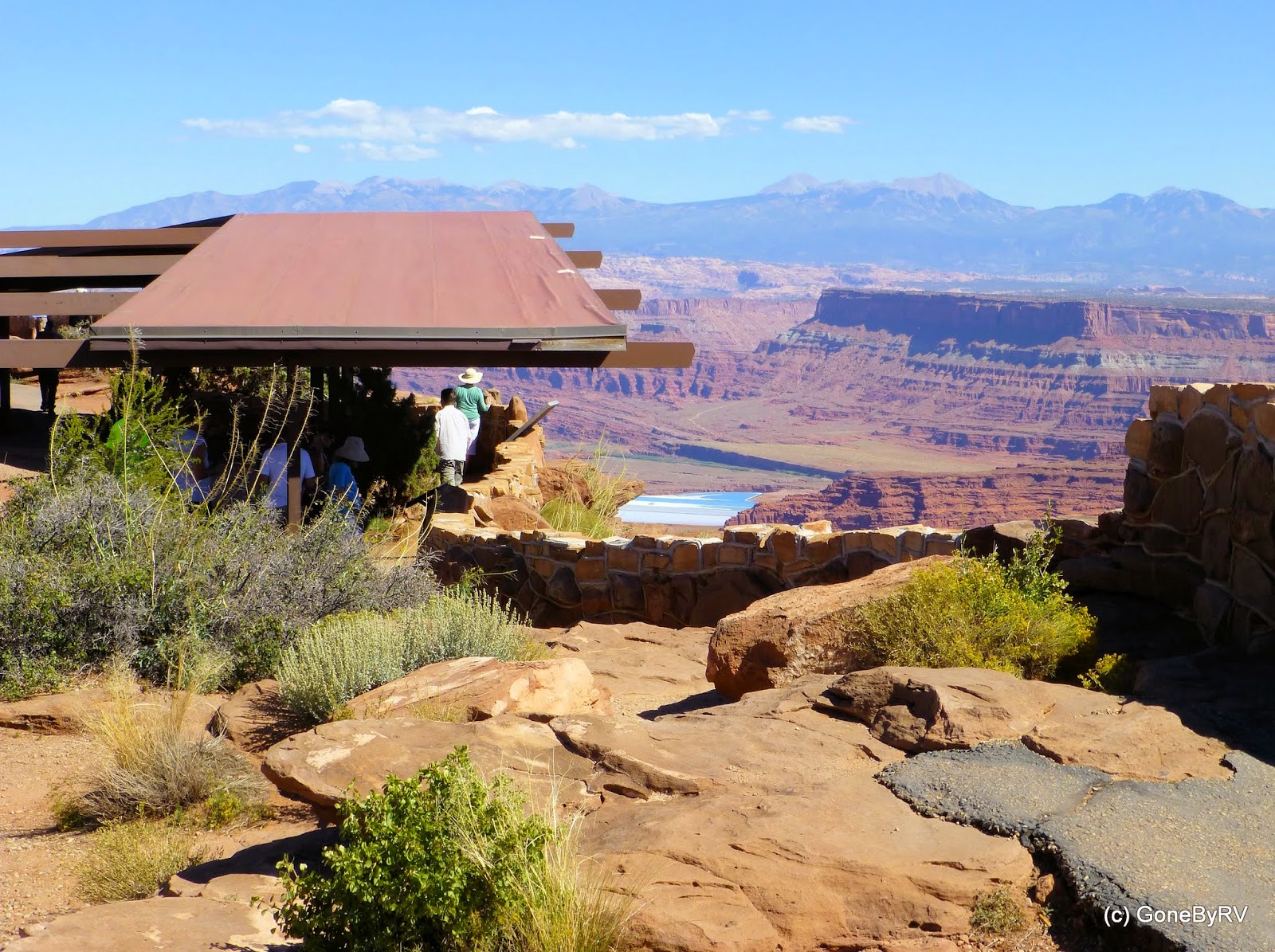 Here's a shelter up near the observation point.  It was a nice shady place to eat lunch. 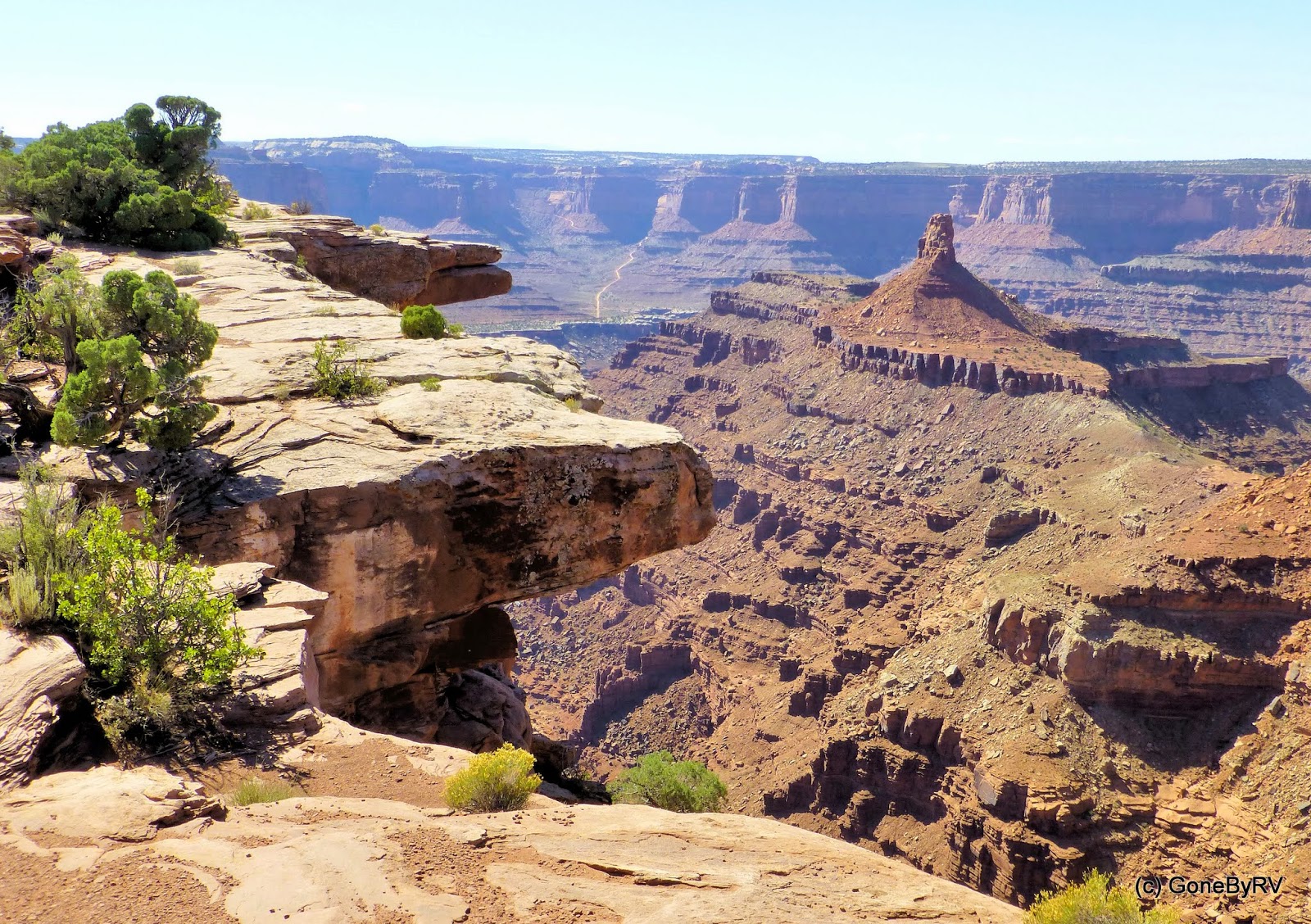 Soon it was time to begin the trek back to the visitor's center. We chose to take the West Rim Trail for the different views. 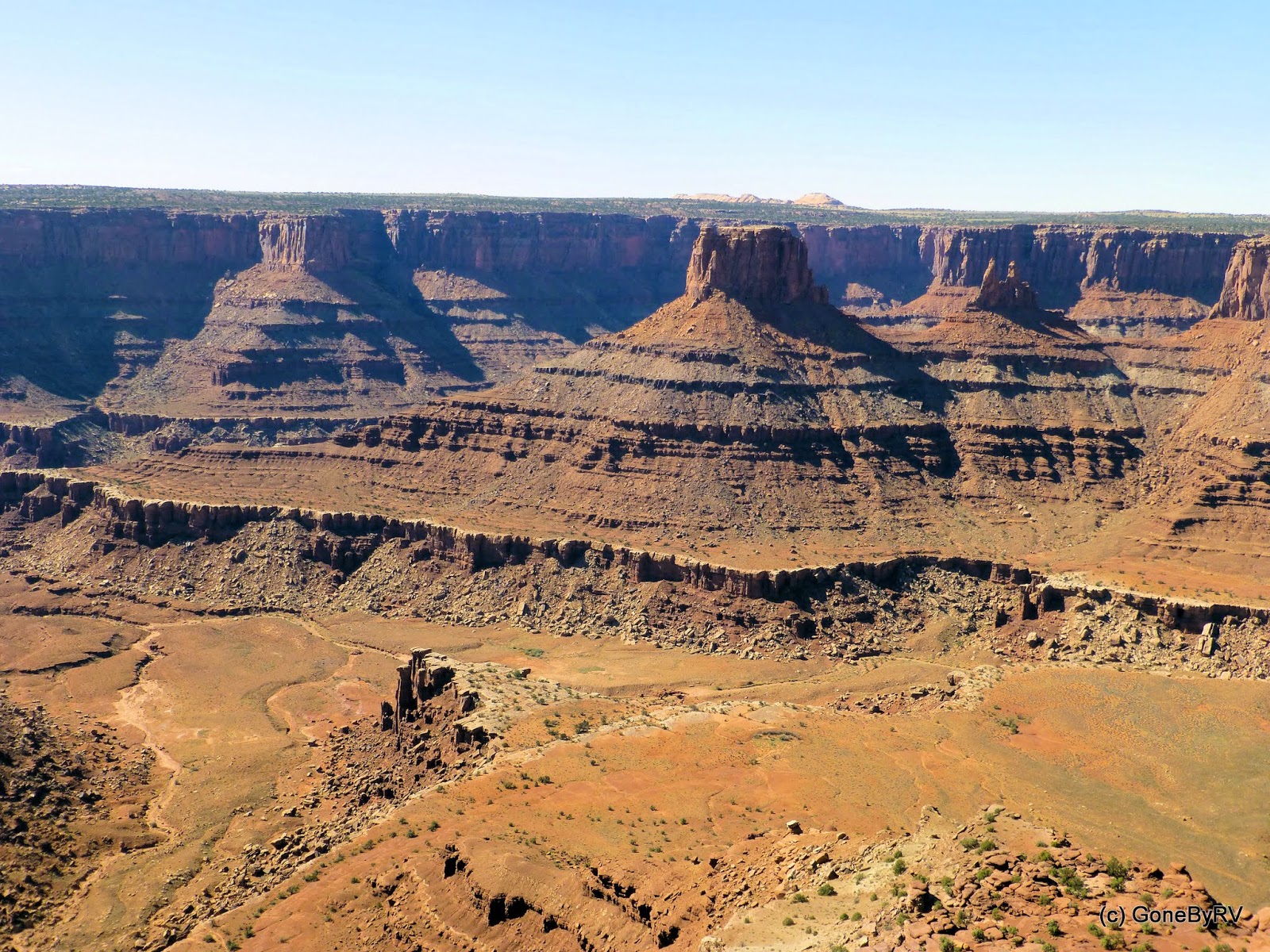 We encountered only one other couple along the entire hike back.  The views were excellent. 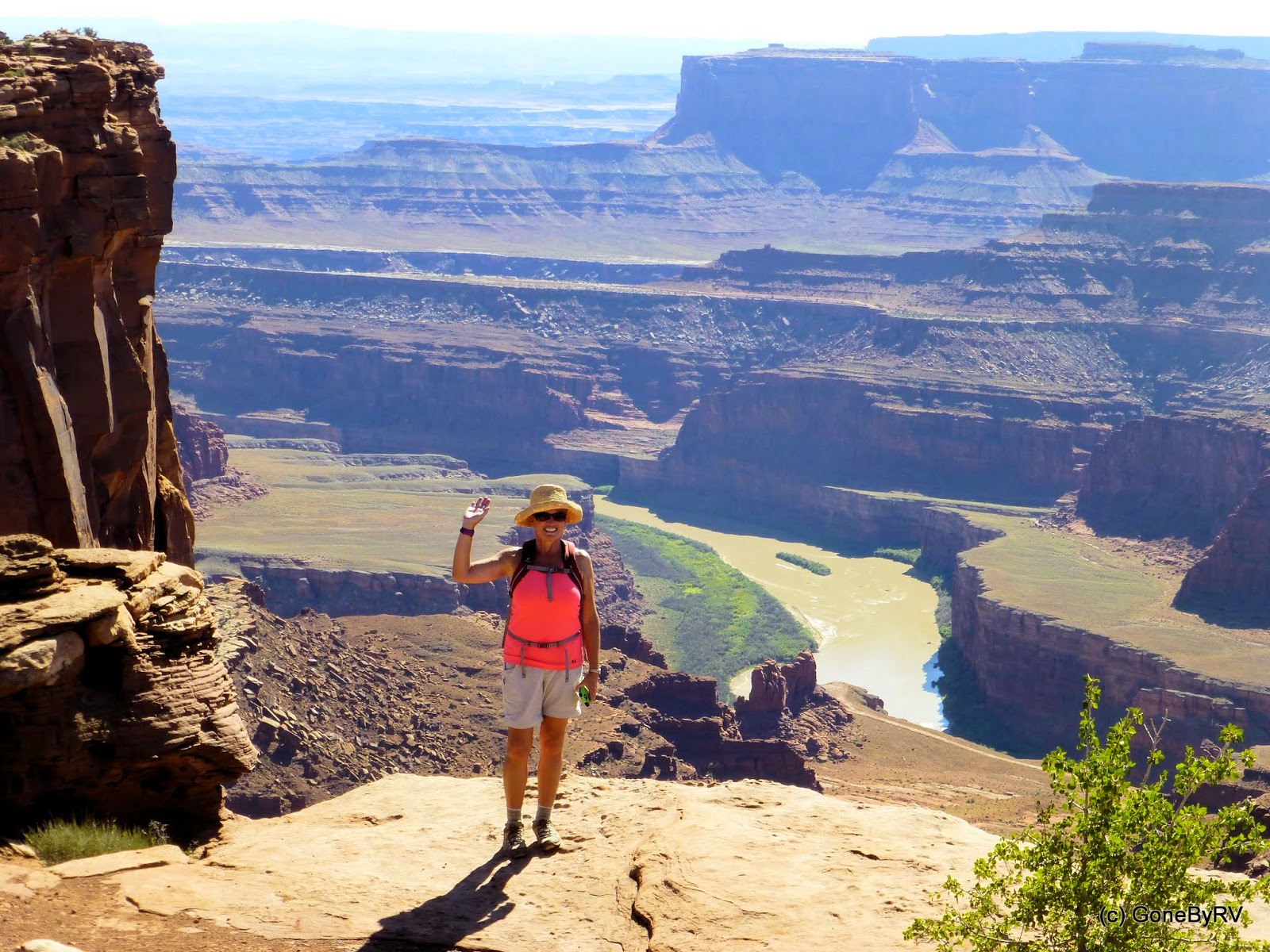 Here's a picture of Karen with the Colorado River far below in the rear. 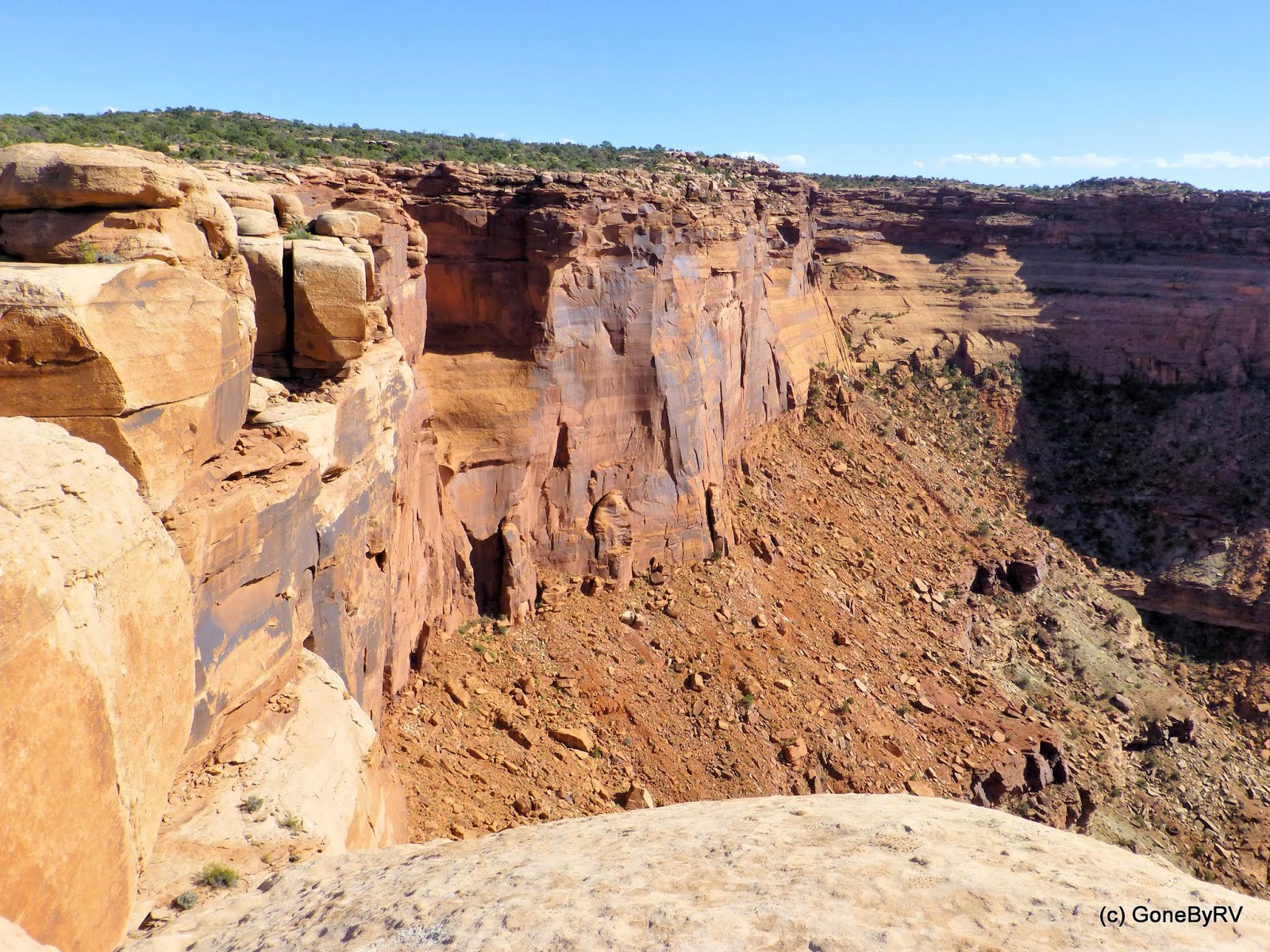 The next two pictures were taken from the West Rim Overlook.  This was a HUGE solid piece of slickrock overlooking a great expanse. 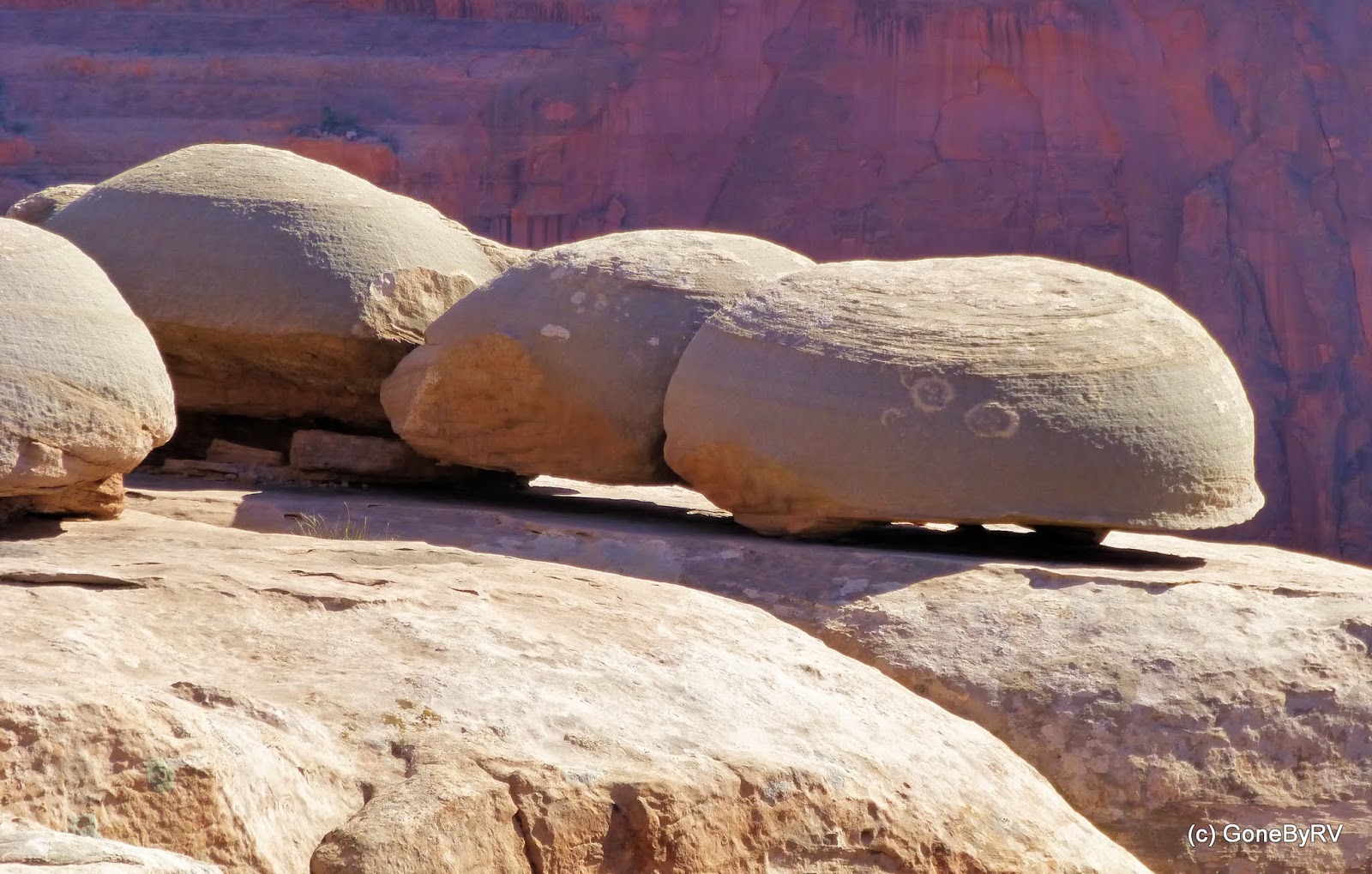 This strange rock formation was positioned on the edge of the slickrock.  I'm not sure how it was formed, but interesting to look at nonetheless.