We haven't posted for a few days because we really didn't do a whole lot.  For anyone who follows our blog, the blisters have healed and we're ready for adventure again.

We left Island Park, ID on Monday and realized that we had been there for 3 weeks. That's the second longest amount of time we've stayed in one place since we began FTing back in January.

Our latest destination was La Grande, OR a distance of approximately 538 miles, but since we don't drive long days anymore (that's for you Paul) we decided to overnight in a Walmart lot in Jerome, ID.  Not too bad, but Karen still doesn't sleep too well in Walmart lots.  (I had no trouble, however.) 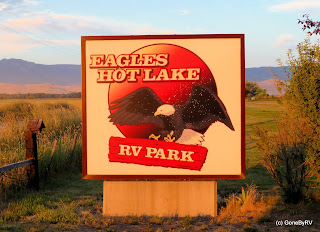 The next day we arrived at Eagles Hot Lake RV Park just south of La Grande, OR. We'll be here for a week, but nothing really planned.  Just doing some housekeeping and "catching up" kind of things. 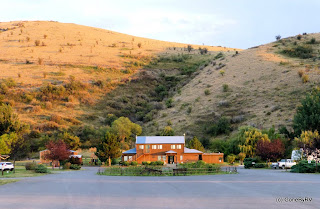 The park is out by itself, but very comfortable.  There's mountains surrounding us on two sides. 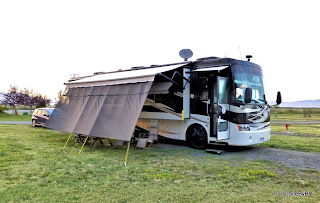 All of the sites are very long and there is plenty of room between sites.

It's one of the least crowded campgrounds we've stayed in for quite awhile.  Very peaceful and only a single train track in the far distance. 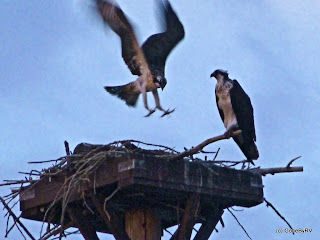 While walking around the campground tonight, we observed an osprey nest on a high pole near the end of the campground.  A fellow camper told us that the mother has been up there with her two babies, but that they have yet to leave the nest. This "hopping" action is about all they've managed so far.

Well, the end of our second day and we really haven't accomplished too much.  It's great! A note to Mui of the blog 2 to Travel Phaeton, I finally made to the hardware store and found a plunger for your wet bay sewer hose "adapter".  I'll install that tomorrow.

That's about it for the past few days. 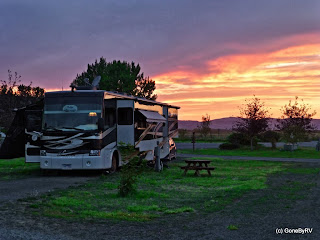 That's for stopping by to take a look!
Posted by Steve and Karen at 1:06 AM