Friday we got a chance to get out and explore the area a bit.  We decided to take a drive along the Cascade Lakes Scenic Byway, not only to see the beautiful views, but to also look for places to use our Sea Eagle inflatable boat during the coming days. The Byway encompasses 66 total miles, but we entered a bit north of the southern most point because we were checking out some lakes and reservoirs along South Century Drive. The Byway runs totally inside the Deschutes National Forest and there are many, many US Forest Service campgrounds throughout. 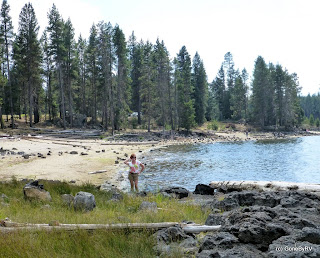 We first made a stop at Crane Prairie Reservoir.  The reservoir has several campgrounds and launch sites, but it's also fairly large and the wind was blowing at a pretty good clip. 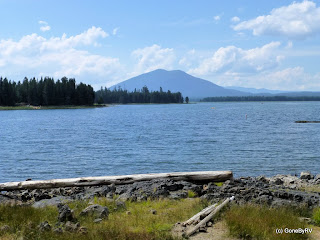 The next stop was a bit north at Cultus Lake.  This lake is smaller, but was still full of folks having a good time boating, camping, and even scuba diving.  All of the bodies of water we visited today were very clear. 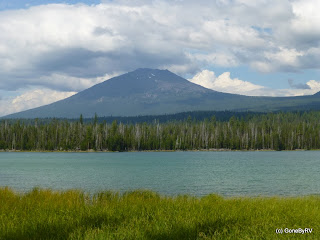 Little Lava Lake is a small body of water, but only open to non-motorized boats.  This looks like a very real possibility for some boating for us. The South Sister peak can be seen in the background 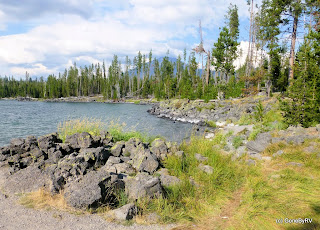 Lava Lake is situated immediately beside Little Lava Lake, but is separated by solidified lava which flowed some 10,000 years ago from Mt. Bachelor.  . 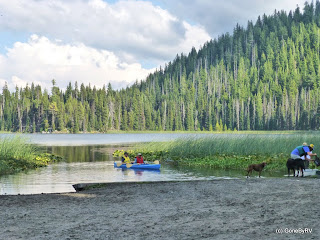 We particularly liked Hosmer Lake. Not only were there many folks canoeing, kayaking, and playing in the water, but the access was easy and close to the drop-in parking area. 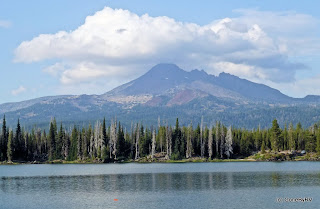 The last lake for the day was Sparks Lake.  This was a very interesting area.  The USFS campground just of of the Byway appeared to be under renovation, but the views were still spectacular. This is Broken Top Mountain seen toward the right portion of the range. 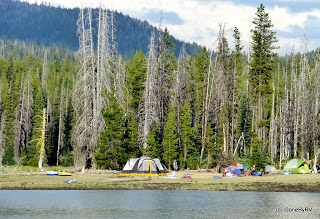 We ventured further around Sparks Lake as we were looking for the boat launching area.  When we got to the ramp we found that many folks in this part of the state just pitch a tent and enjoy "real camping". 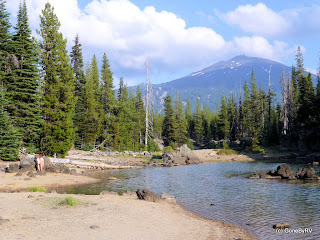 This is another lake we'd like to explore via our inflatible boat.  Sparks Lake is a bit unusual when it comes to lakes as there is no obvious point of ingress or egress for the water.  The lake was formed during an eruption years ago from Mt. Bachelor and now the water has to leach out through the lava rock.  In fact, Sparks Lake tends to get a bit shallow during the late summer months. (Ah, the advantage again of a small boat!)  That's Mt. Bachelor again in the background.

Well, we certainly accomplished our "exploring" goals for today.  We found several bodies of water to explore in our little boat and we certainly discovered a lot of new, beautiful scenery in the process.