A Bunch of Water Activities and An Interesting Observation

I was looking thru our blog viewing statistics today and found a rather interesting commentary on what readers tune in to our blog for. I had always hoped that folks liked to learn about the places  we've visited and the sights we've seen.  Apparently, that is not necessarily the case. Of all of the blogs viewed during the past 2 1/2 months, here are the top 4 blogs viewed in order of highest first.

Over the past few days we've been able to get our SeaEagle Paddleski out on several local waterways and we even did some tubing for a few miles.  Sorry, no pictures available during the tubing as I don't have a waterproof camera anymore. 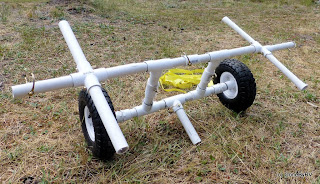 We love our Paddleski, but sometimes it gets a bit unwieldy to handle.  It's 14 feet overall and about 45 pounds, so I decided that there had to be a better way to get it to some launch sites which require longer walks.  After a bit of internet research, I gathered some ideas I liked for kayak and canoe transporters and came up with this device to make moving it around easier. 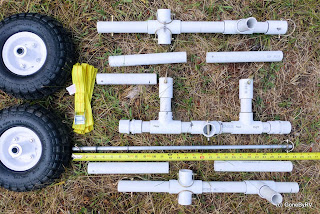 I wanted something which was cheap to build, light in weight, and took up little storage space. The wheels are 10" which I purchased from Harbor Freight on sale and the rest is just PVC pipe, connections, and quick disconnect pins I purchased from Lowes and Home Depot.  I think the entire cost was about $32. The neatest thing in the whole design is the ability to break the entire cart down into small pieces which can be put into a storage bag. 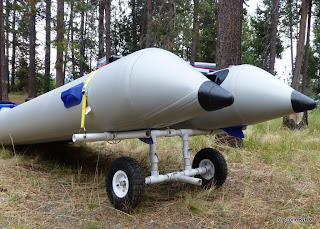 Here's what the cart looks like placed under the stern end of the Paddleski.  Simple idea, but it works very well.

To show how the cart actually works, I recruited my lovely wife  to take the Paddleski for a short jaunt down the road in front of our campsite. 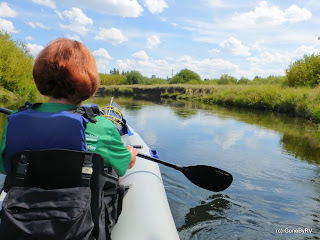 Our first paddling trip was a 6.5 mile trip down the Little Deschutes River which began at our campground and continued to a takeout point toward Bend, OR.  It was a bright, beautiful day and the sky was clear. 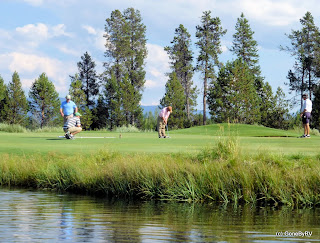 The Little Deschutes River passes through and beside a golf course about midway thru our trip today.  Randy, I had to throw in a picture of golfers for you.

There's a lot of very nice homes along the river. Colors tend to be all brown, or at least some shade of brown out here.  Very earthy! 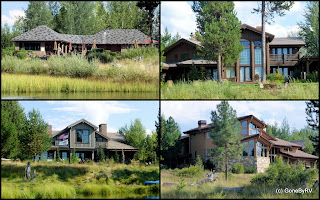 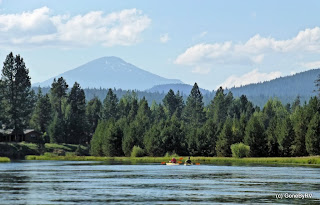 As we approached the end of this paddling trip, the Little Deschutes joins with the Deschutes River and continues north toward Bend, OR.  We saw quite a few folks out enjoying the day either in canoes, kayaks, or inflatables. 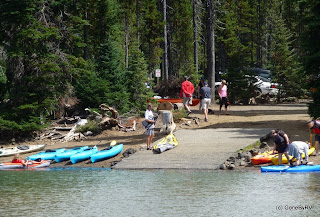 Yesterday we packed the Paddleski into the back of the Honda and headed up along the Cascade Lakes Scenic Byway to Sparks Lake. This is a lake which was formed long ago when the lava flows from Mt. Bachelor stopped.  The lake has no natural ingress or egress of waters other than rain and snow. The water level decreases in the summer as the water escapes through the porous lava in the lake.  As you can see, many folks seemed to have the same idea yesterday about floating around on the lake.

The views from anywhere around the lake are spectacular.  Shortly after putting in we saw the South Sister and Broken Mountain Top ranges to the north of the lake. 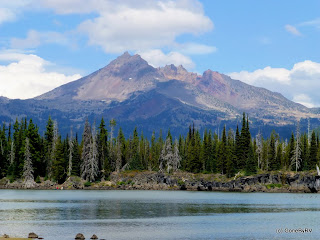 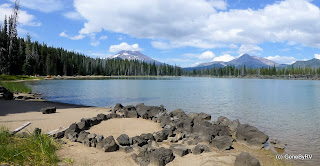 We paddled around the perimeter of the lake and tried to head up every cove we found.  We pulled up on shore to eat lunch here and take-in the scenery. 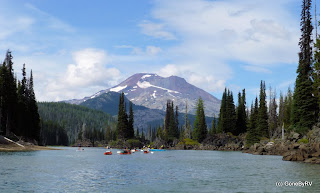 The area surrounding the lake is controlled by the US Forest Service and many folks put their boats in at the ramp, then paddle to many spots around the lake to camp along the shore.  This group had just broken camp and was heading back to the ramp to head out for the weekend. 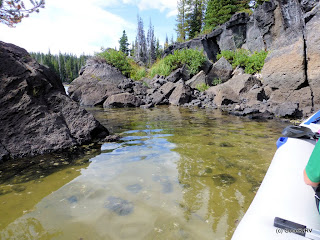 As mentioned earlier, the lake was formed by lava flows many years ago.  The lava rocks today create beautiful, but jagged shorelines.

We had a great time on the river and the lake.  There are many, many lakes in this area which we'll have to save for another time as we'll be leaving in a few days.  Just as well, however, as I know that we'll return again and have new adventures to look forward to.