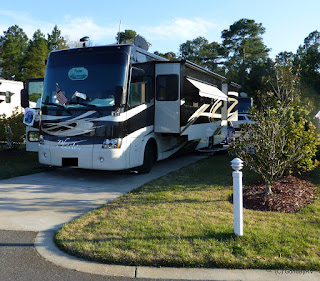 We arrived at Coastal Georgia RV Resort for the upcoming Tiffin RV Network (TRVN) Rally on Sunday afternoon after a short 3.5 hour drive north from Bushnell, FL.
The campground is very nice with all concrete pads, paved roads throughout, and a very nice pavilion in which the group will hold our meetings, classes, and of course meals.
The best thing about rallies is getting the chance to re-kindle old friendships again of folks we haven’t seen in awhile. I’m purposely not going to list individual names as I don’t want to leave out anyone. 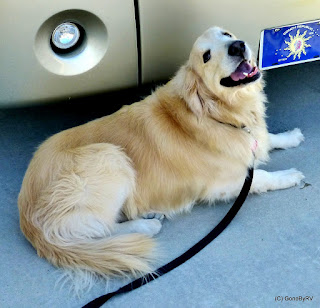 Ok, I have to make one exception.  I’ve been waiting for see my big Golden Retriever buddy Finnegan again. 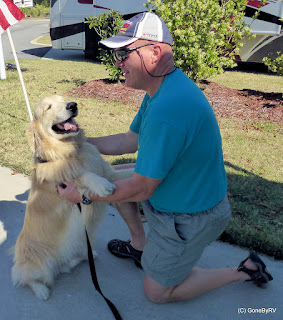 We walked over to Finnegan’s owner’s site and I yelled out his name.  I can’t be certain that he remembers me or not, but he came bounding over with only the enthusiasm that a Golden Retriever has. Good to see you again Finnegan!


The Rally doesn’t officially begin until Wednesday, but as of today the majority of coaches are already here. Trish has taken on the role of food planner and organizer and Monday night we had “salad night”.  There were so many different types of salads brought in “pot luck” fashion by early attendees.  Tonight we had “fajita night”. Trish and her helpers cut and cooked chicken for the fajitas and gathered together all of the fixings. 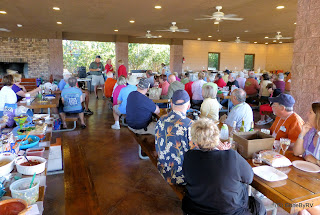 I believe she indicated that approximately 112 people were in attendance tonight. Wow! The Rally hasn’t even begun yet.  Great food both nights so far and the chance to catch up with many old friends we haven’t seen for some time.  Great rally thus far.  I can’t wait for the “real” Rally to begin.
Thanks for stopping by to take a look!
Posted by Steve and Karen at 7:07 PM