Disney's Hollywood Studios and a Barbecue with New Friends

On Tuesday (after a rest of a few days) we decided to venture out to Disney World again. This time we decided to visit Disney's Hollywood Studios.
We enjoy getting a glimpse into the world of film making and the "behind the scenes" activities associated with it.  Although this isn't really a busy season yet, the crowds were still pretty heavy.  The weather was great, so I think everyone was thankful for that.  We've noticed that at the beginning of the day everyone looks so fresh and anxious to get into the parks and get going.  By the end of the days, however, both kids and parents are really dragging.

We always take the "Backlot Tour" when we come here.  Not only is it on a slow moving tram, but the old
used props in an area called the "boneyard" are pretty interesting.  Many times, these props are re-purposed and used again on sets.


I sometimes wonder how families can afford to 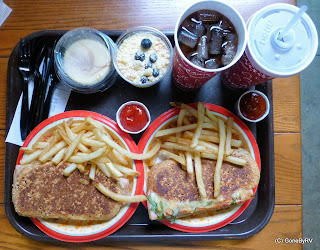 come to Disney.  Not only are tickets expensive, but so is the food.  Here's a look at one of the cheapest lunches on the menu.  For $33 you got 2 drinks, 2 desserts, 2 turkey sandwiches on ciabatta bread with fries.

I really enjoy the "art of illusion" created in the 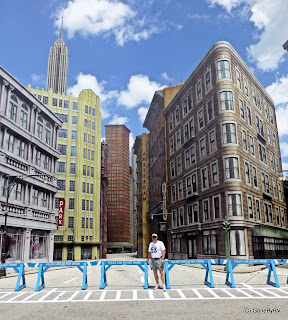 making of films.  Here I am standing in front of a huge painted facade intended to show tall city buildings.  The skillful painting of the "buildings" really fools the eye into thinking that the buildings are tall and 3-dimensional. With me in the foreground, you can get an idea of true scale, however.

Several streets of famous cities such as New York, 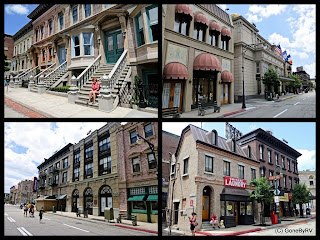 Chicago, and San Francisco have been constructed for the film making folks when going to the actual locations are not possible.  Every building  in the following collage is a facade only.

I really wanted to get a chance to ride the "Tower of
Terror" today, but we ran out of time.

The nightly closing show at the park is called 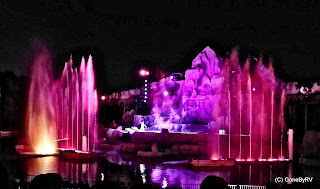 Fantasmic.  It uses lasers projected onto sprays of water, pyrotechnic effects, and special lighting explore the imagination of Mickey Mouse.  On certain nights (Tuesday being one of them) the show is only at 8:30 PM.  Since it seems as though everyone in the park wants to see this show, early arrival is important.  At times, the amphitheater actually fills to capacity.

We've seen the show before, but it was excellent 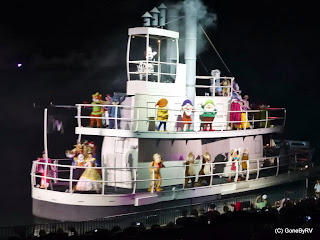 again!  No matter what you think of Disney, I think that the Disney Company does this type of amusement park better than anyone.


Last night we got together with four other couples
we recently met at the Thousand Trails Orlando park and had a barbecue at the site of Marianne and Rich.  All of the couples were fulltimers and we loved listening to the many interesting stories they had to tell.  The food was excellent as always, but the newly made friendships were even better.   Marianne and Rich, Bill and Kathy, Terry and Bob, and Donna and PeeWee I hope to cross paths with you guys again in our travels.

Thanks again for stopping by to take a look!
Posted by Steve and Karen at 10:45 PM