Over the past few days we had a chance to visit the Kennedy Space Center (KSC) on Merritt Island, FL.  We had toured there about 20 years ago and the tour and complex have changed quite a bit since then.  The basic ticket allows entrance to the Visitor Complex and a bus tour of certain areas of the space center. The Visitor Complex includes the Rocket Garden,
two IMAX theater presentations, the Astronaut Memorial, exhibits on Early Space Exploration, a Shuttle Launch Experience "ride", the Astronaut Encounter, and a trip to the nearby Astronaut Hall of Fame.  The Astronaut Hall of Fame may be visited on a separate day within 7 days of the ticket's first use. 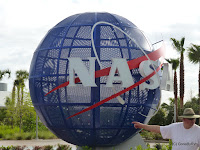 If all of this seems like a lot to do in one day you'd be correct.  The Visitor Complex is open currently from 9-5 each day and the Astronaut Hall of Fame from noon-5 each day.  We arrived shortly after 9 the first day and we were still unable to see everything in the Visitor Complex.  We came back on a second day to view the Astronaut Hall of Fame.

Part of the Visitor Complex tour includes a bus ride out to the Vehicle
Assembly Building.  The bus tour  is narrated, but the basic ticket does not include a stop at the VAB.  (I believe it did when we toured years ago.)  Much of this part of the tour includes a stop at the Apollo/Saturn V Center.  This was very interesting and chronicles the space program thru the years.  Whenever you choose to do so, you can re-board the bus for the ride back to the Visitor Complex.

Upon arriving back at the Visitor Complex we attended a short Q&A seminar at the "Astronaut Encounter".

Past astronauts rotate speaking engagements here.  Our astronaut was Edward C. Gibson, part of the Skylab III mission.  This was the final Skylab mission and was the longest manned space flight at that time. Dr. Gibson was very interesting and his short talk was well worth attending. 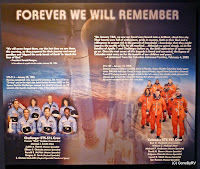 The complex is constantly changing and new exhibits being added.  This summer a huge addition will be the opening of an exhibit dedicated to the space shuttle Atlantis.  Atlantis was the last shuttle ever flown by NASA in July, 2011.  The space shuttle program was officially ended in August, 2011.

We had a great visit to the Kennedy Space Center and would highly recommend it to anyone even remotely interested in the US space program and its' evolution thru the years.

Thanks for taking a look!
Posted by Steve and Karen at 9:34 PM