LED Lights and Dealing with the USPS


Many of the newer MHs today come with LED lighting.  Our Tiffin Phaeton is a 2010 model and was still manufactured using halogen bulbs in all of the ceiling lights and incandescent lights in most of the other fixtures.  Because LED lights produce much less heat and use less power than comparable halogen bulbs we had been looking at changing out for some time, but I wasn't sure of the color I wanted and sure didn't want to pay the price some places were charging. 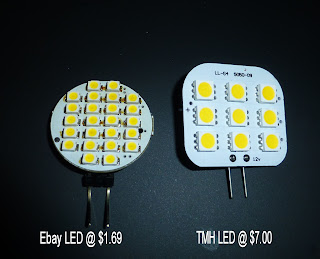 I decided to go the cheap route to allow me to compare light color first.  I purchased a set of 10 G4 bulbs for $14.99 from Ebay.  These lights were listed as pure white and rated at 0.9 watts per light.  These lights seemed "whiter" than what we wanted, so I made another purchase of 10 for $16.99. The latter purchase was rated at the same 0.9 watts per light, but the color was "warm white". 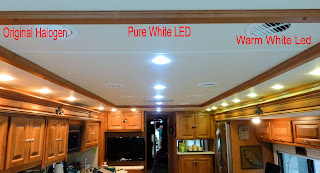 I installed both sets of LED lights and kept a row of the original halogen bulbs for comparison.  We still leaned toward the warmer color of the halogen bulbs at that point. Also, the light output from the Ebay bulbs just did not seem adequate.

During out recent stay in Red Bay we went over to talk to the guys at HHH Electronics.  This company supplies all of the LEDs (among other electrical components) for the Tiffin coaches. I indicated to them that we didn't like the brighter white color that I had selected.  They suggested that I go over to the plant and take a look at the finished rigs which all had LEDs installed.  We did, and were impressed.  We wound up purchasing 58 bulbs to replace all of the ceiling halogens in our rig.  The purchased bulbs cost $7.00 each and are rated at 2.2 watts per bulb. 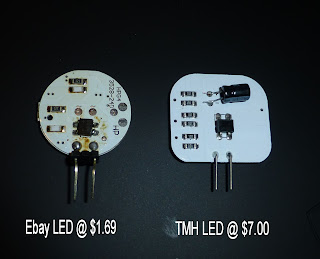 One of the reasons for the higher cost is that the $7.00 bulbs have voltage regulation where the cheaper bulbs do not. This is an important factor when LEDs are used in RVs as the voltage can vary. We may do something later with the rest of the rig's fixtures, but will do a bit more research first. 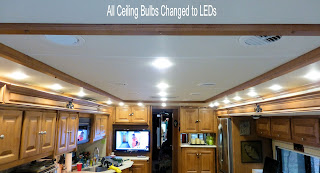 Yesterday we installed all of the ceiling LEDs in short order.  We are VERY happy with the light color and output.  MUCH brighter than the cheaper ones I had purchased, and a much more even color.

Moving along to our next adventure, we drove to a small local post office in an attempt to receive our mail via "General Delivery" later in the week.  We use America's Mailbox as our mail forwarding company in South Dakota and have experienced absolutely zero problems since signing up with them last October. Up to this point, however, each mail "drop" had been sent to the campground we were currently staying in.  We are currently staying in a Corp of Engineers park and they will not accept mail addressed to campers.  Not a problem (or so we thought).  Our research prior to beginning the FTing lifestyle indicated that we could have mail delivered to a small, local post office as General Delivery. We took a look at the USPS website and found a small post office near us that was listed as accepting General Delivery mail.  Since we weren't doing a whole lot yesterday during a very rainy day we decided to make a drive over to the post office.  Well.....it's a good thing we did.  The clerk advised us that they cannot accept General Delivery mail and that it is "against the rules".  Those who did are breaking the rules.  Karen informed her that MANY, MANY post offices accept this type of mail, but the clerk was an unbending beauracratic type (or just ignorant), and we left without success.  On to the next post office.  We drove the same distance north to the next post office.  This office is larger than the first, but immediately indicated that they do receive General Delivery mail.  Amazing, huh?
The lesson to be learned here is that if the first Post Office declines your request for General Delivery, then just try another one.

Just out of curiousity, what has been others' experience with General Delivery and the post office?

Thanks for taking a look!
Posted by Steve and Karen at 8:50 PM