Day 5 at the Tiffin Service Center 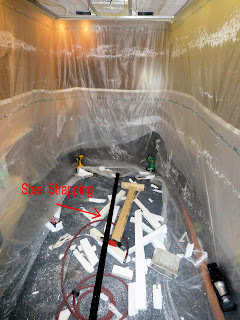 Today began day #2 of the "droopy ceiling" repair.  Work began promptly by reconstructing the protective sheeting and carpeting in our living area. 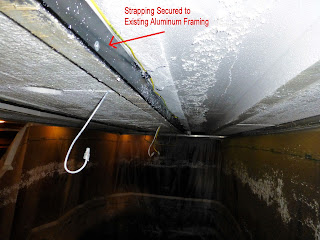 In addition to re-gluing all of the ceiling panels, two steel straps were bolted lengthwise to the existing aluminum frame members running before and past the tray ceiling area. This part was completed by lunch. 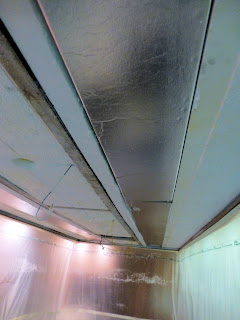 After lunch the HVAC ducts were re-installed. In a few more hours we returned to check on the work's progress and the tech and his assistant were putting the final touches on the repair.  Lighting and vents had been replaced and all of the sheeting was being removed. 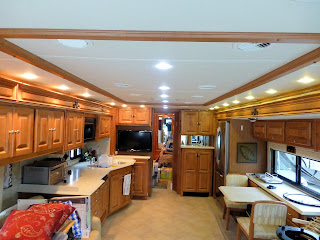 Two techs worked on this job and did an excellent and speedy (2 days vs. the originally predicted 3 days) job.  It was also very nice that they cleaned up the area so well.  The final job looked good and hopefully we'll have no more problems in this area.

Another problem we've just recently encountered, and seems to be a somewhat common problem, is that our right rear hydraulic leveling jack has been coming up very slowly as of late.  On our coach a visual and audible signal is sent to the dashboard if all of the jacks are not in their raised position prior to moving the coach.  Our jack would eventually rise to within 1 inch of being completed raised (and the signals would go out), but it was taking a lot longer than usual.

The end of the work day was nearing and a tech was looking at the jacks on a rig in the service bay beside us.  I told him of our situation and he advised that the problem could be several things, but that a new jack if needed was in the range of $400 plus installation. While in Red Bay last year I noticed that the techs use a lubricating product named SprayOn LU711  on many things.  I purchased a couple of spray cans last year and have been using it on the steps, jacks, etc.  The tech advised (and did it while we waited) to use this product and spray up into the area where the inner leg moves upward into outer cylinder.  He was attempting to dislodge any small bits of dirt and debris which might inhibit the movement of the jack legs.  He also advised that it was a good idea to let the lube run downward onto the full length of the jack's leg, then wipe the leg with a clean cloth to prevent dirt and dust from sticking to the leg. (Note: The product claims to resist dirt from clinging.)

I don't know if this was our problem or not, but it seemed a lot cheaper to give it a try rather than paying for a new jack.  After a good dousing, the tech ran the jack into position, then fully retracted it.  End result, the jack worked as it was designed.  Sometimes we get a bit lucky.

Then sometimes we don't get as lucky. At this point, everything on our list of repairs has been completed to our satisfaction with the exception of the "internal leak" problem.  Essentially, no leak has been found so far. NOT GOOD AT ALL!  Because we are finished with our original list of repairs this tech is basically finished with us and moving us along to our next piece of work.  The failure to find the plumbing leak has been noted on our paperwork.

There are several large "recall" items common to many Tiffin rigs in recent years.  These include a removal of the floor under the "wet bay", removal and replacement of the large slideout floor, and the removal of the "roof rails".  The latter is the area where the flat roof  forms a radius over the edge and connects to the sidewalls. Many recent year rigs have developed thin cracks in the radius and have a need to be repaired.  I will elaborate more on this next week as this is the final repair or the "big 3" which still needs attention on our rig. We had the other 2 items repaired during a visit last March.  Unfortunately, these items alone cannot be repaired by the appointment system.  I believe there are currently 4 bays doing the roof rail replacements. We received a work number when we first arrived last Monday.  We'll be called to  the appropriate bay when our "number" comes up.

Thanks for dropping by!  The adventure continues next week.
Posted by Steve and Karen at 8:20 PM