We've moved to Boise, ID and will be spending a couple of weeks seeing the sights.
Today we decided to visit the Idaho State Capitol Building and learn a bit more about the history of Idaho and the capitol building.  Because it was Saturday, there were no government workers around, and actually very few visitors.

A quick bit of history on the Idaho capitol.  In 1863, President Lincoln signed the law that created the Idaho Territory.  The first territorial capitol was in Lewison, ID.  In 1885, the Territorial Legislature approved construction of a centralized government building in Boise, ID.  In 1905, construction of a new building began in the same area in Boise because the old building lacked amenities and necessary space.  The central section and the dome were completed in 1912. In phase II, the east and west wings were completed around 1921.  The most recent restoration project planning began in 1998, but due to financial problems the complete project was not completed for quite some time.  The Re-Dedication Ceremony was finally held on January 9, 2010. 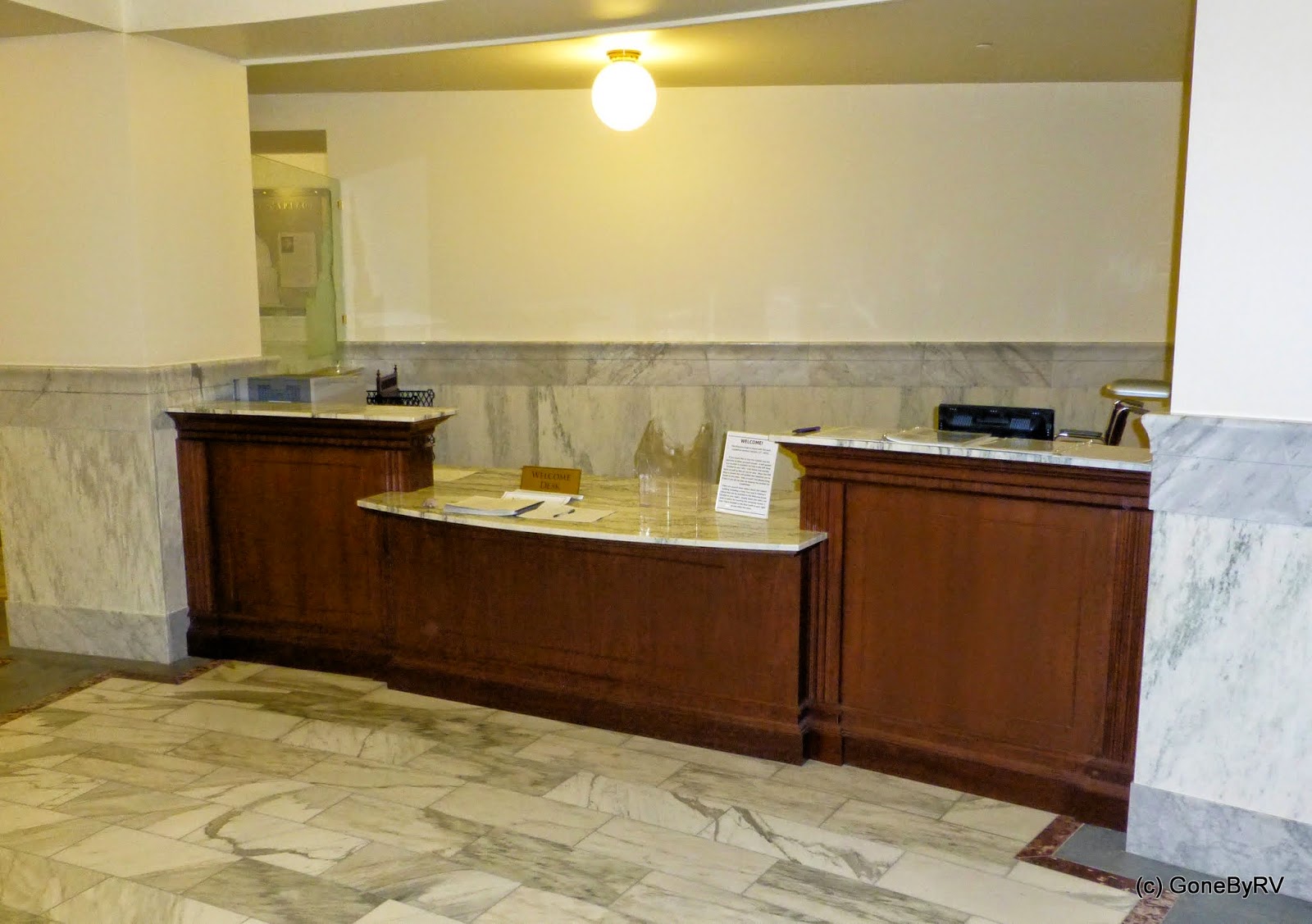 We were very surprised to find the ease in which we were allowed to enter the building.  No metal detectors, only one uniformed security guard observed all day, and no one was around to stop us from wandering around the entire complex (unless the doors were locked).  No one at the Visitor Information Desk on the weekend. 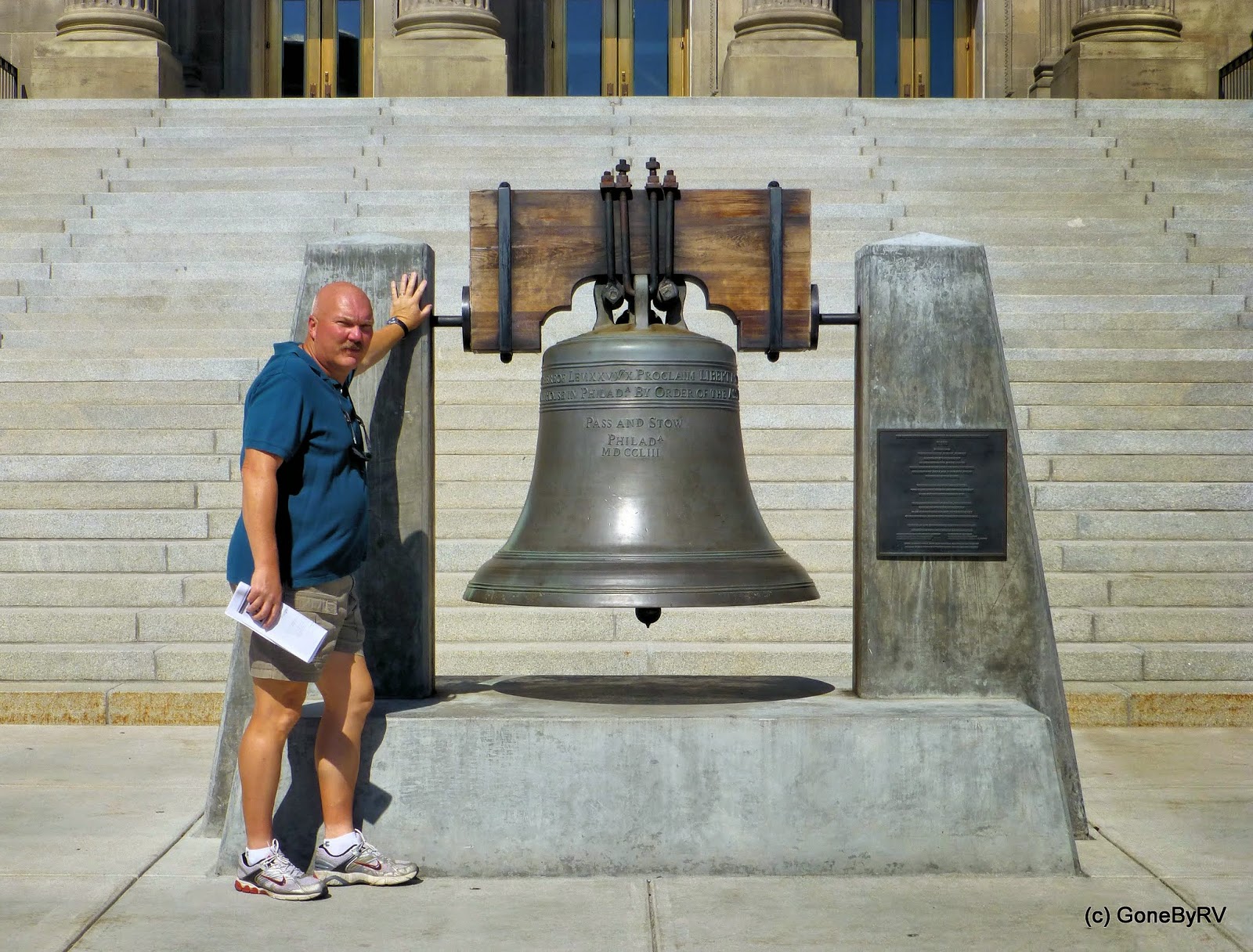 At the base of the steps leading into the Capitol from Jefferson Street is a replica of the Liberty Bell.  It was given to the state by the U.S. Dept. of the Treasury in 1950. 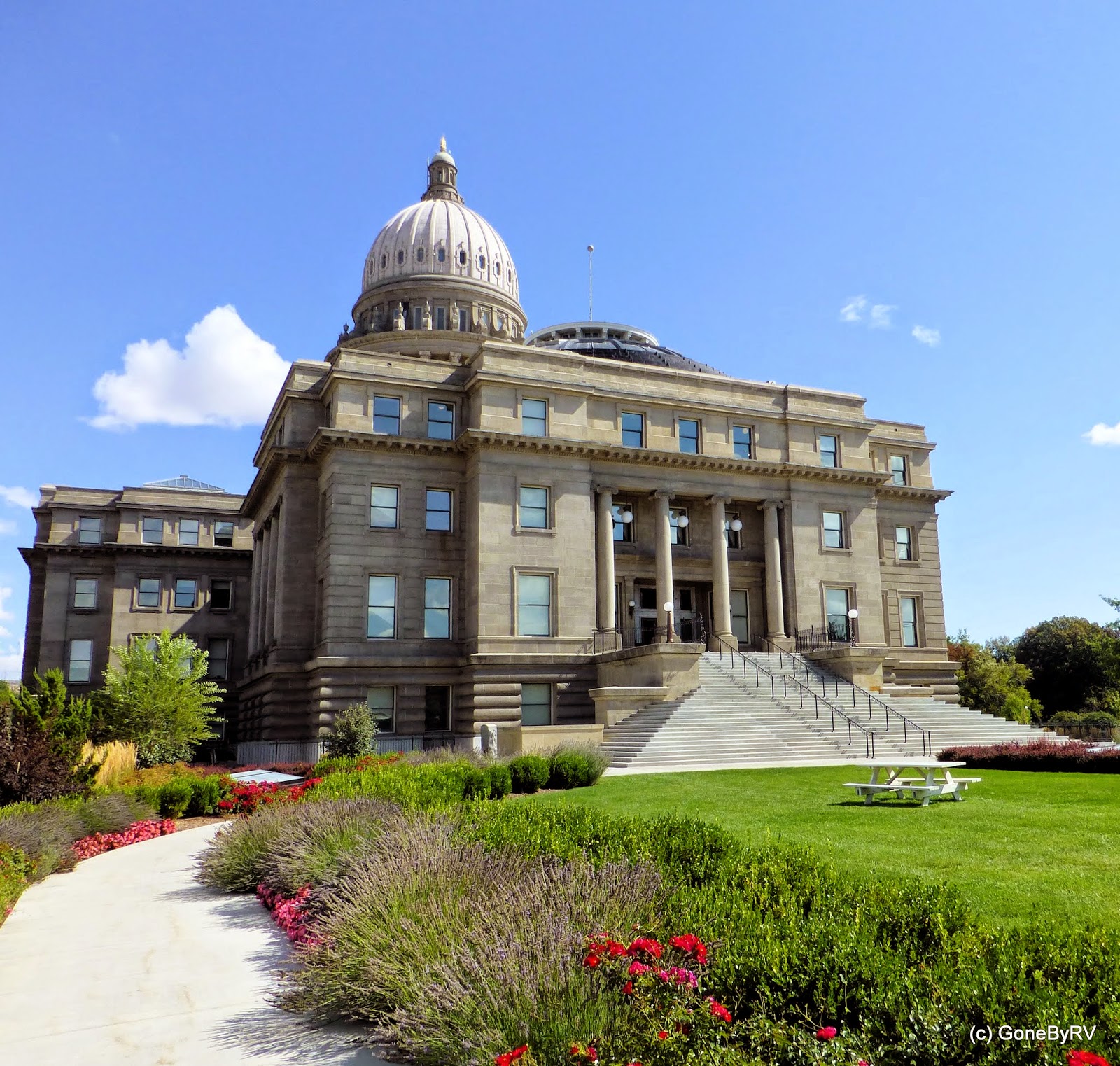 A walk around the exterior revealed simple, but well-tended landscaping.  This is a few from the street looking toward the West Wing. 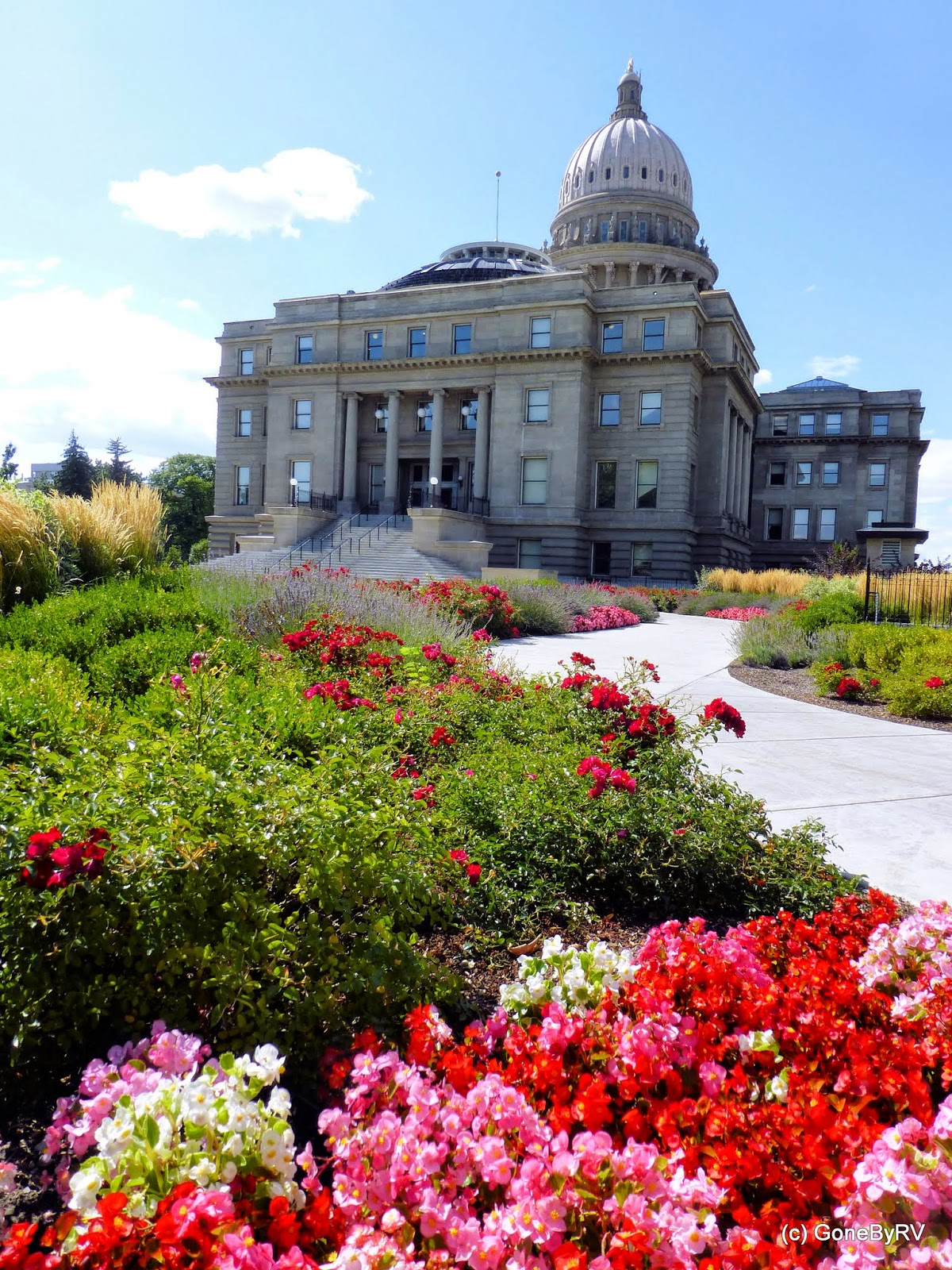 We really liked the view from the East Wing and eventually entered the Capitol from this side. 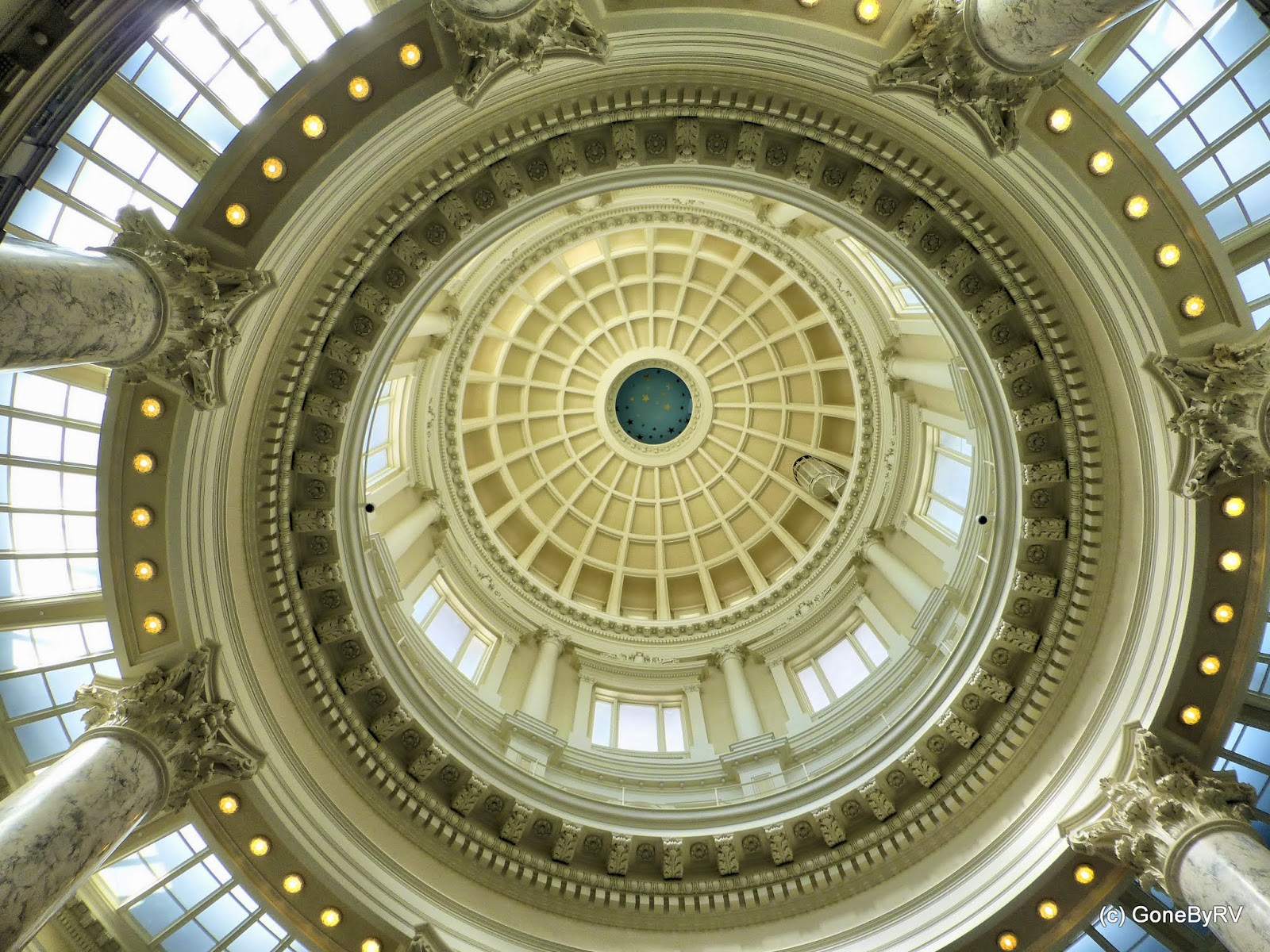 We entered on the Second Floor which houses the Executive Branch of Idaho's government.  The Governor, Lt. Governor, Secretary of State, and Attorney General offices are on this floor. Of course, no one was around on Saturday. This gave us our first view looking up at the dome from the rotunda. 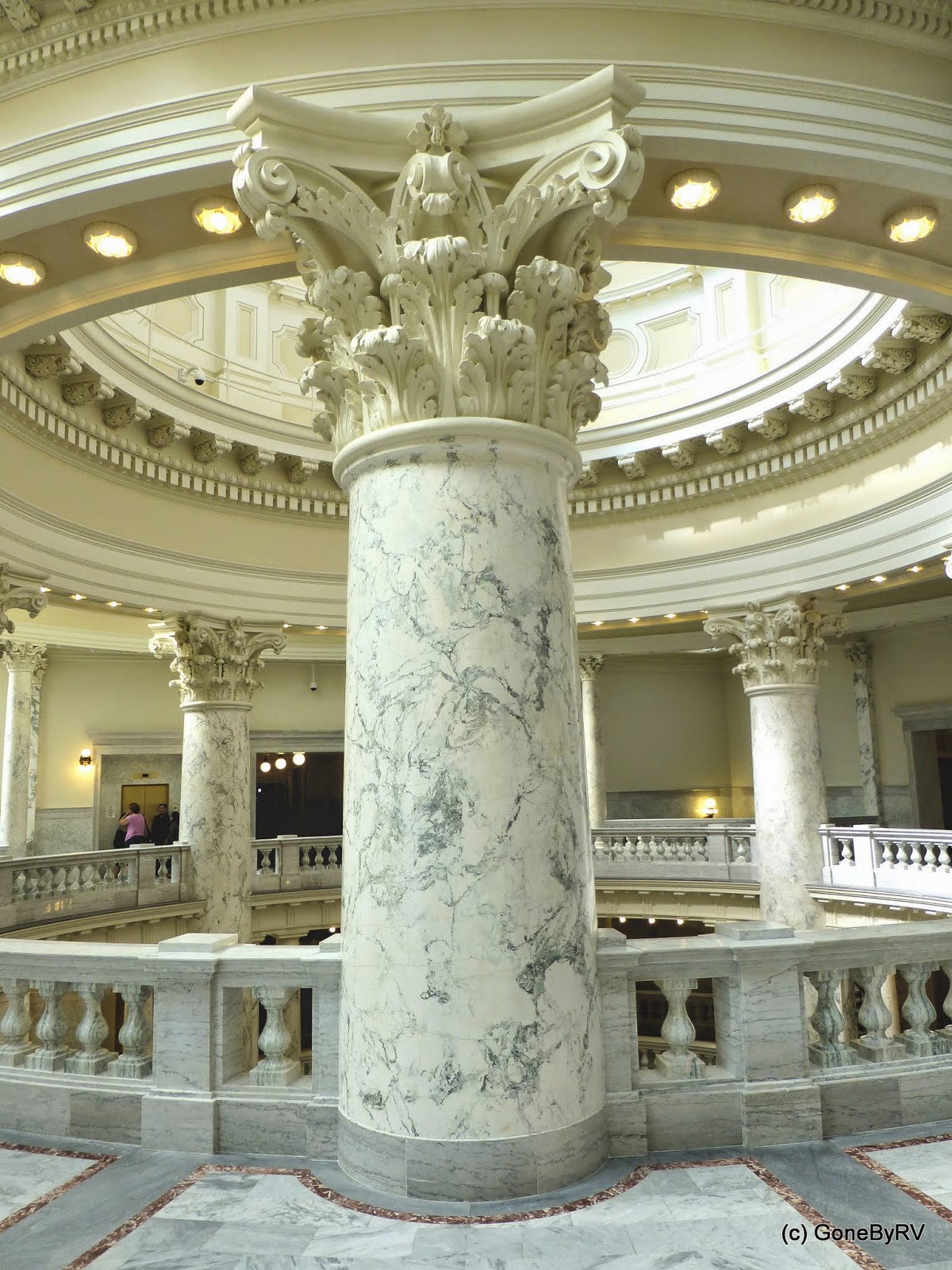 There are eight huge Corinthian-styled columns which support the dome.  We thought they were solid columns, but later discovered that "they are not solid, but have a finished surface composed of scagliola--a mixture of gypsum, glue, marble dust, and granite dyed to look like marble".  Still, they were beautiful and certainly fooled me. 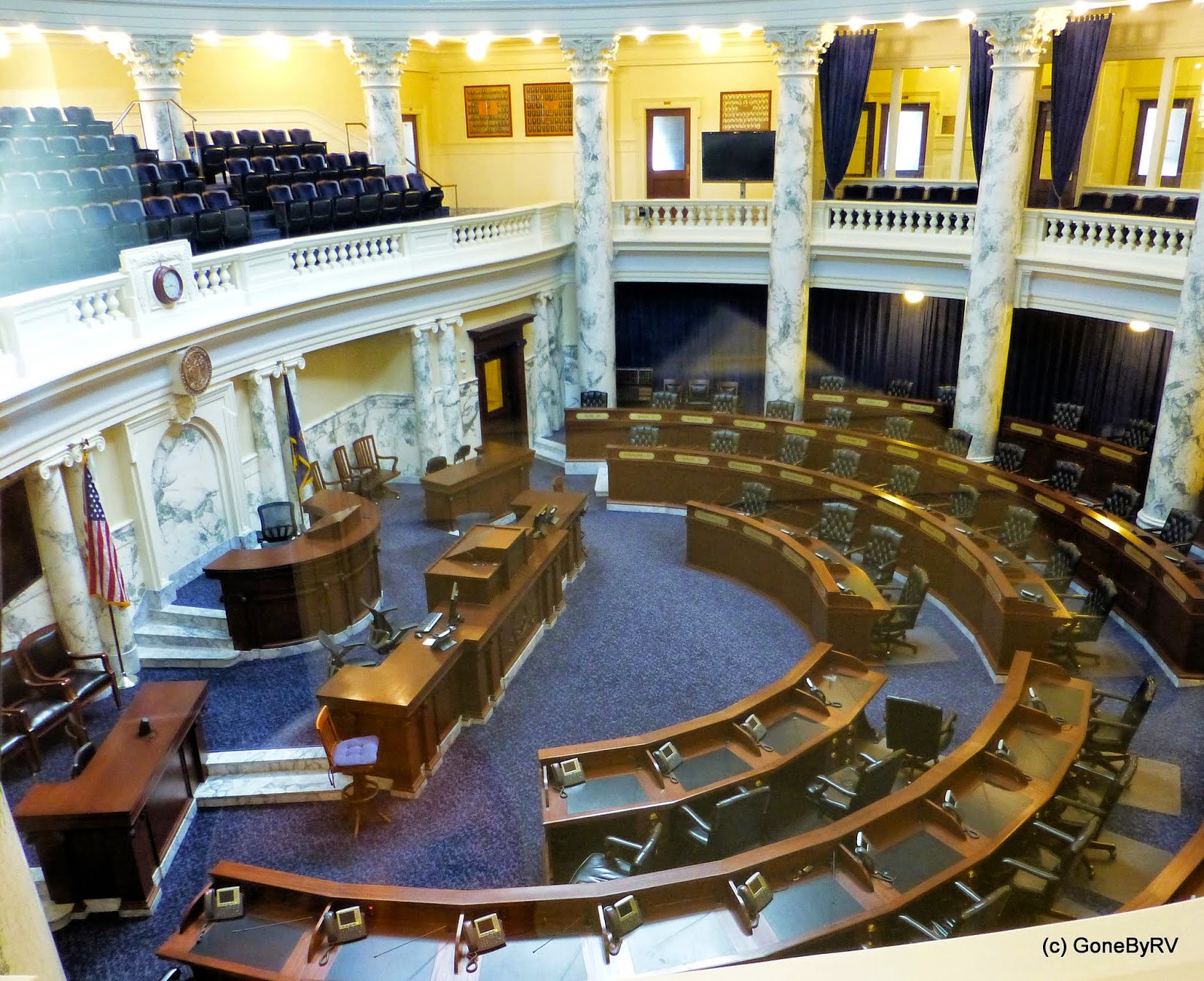 The Senate occupies the West Wing of the Capitol. This is a view from the Fourth Floor which allows visitor viewing via the Gallery. 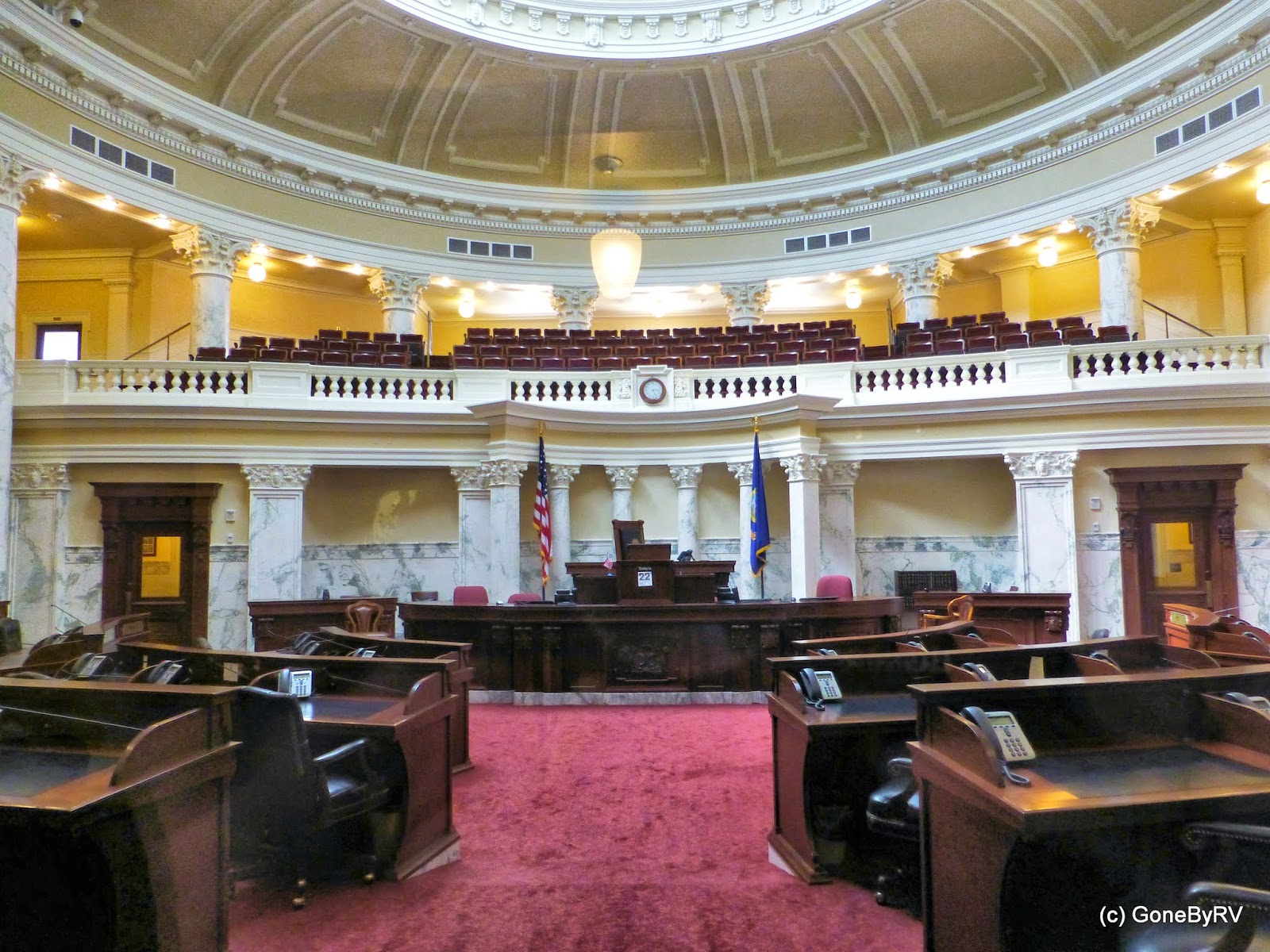 The House of Representatives is housed in the East Wing and is set up similar to the Senate.  This view is on the Third Floor looking onto the floor of the House.  (Obviously, the Legislature is not in session during our visit). 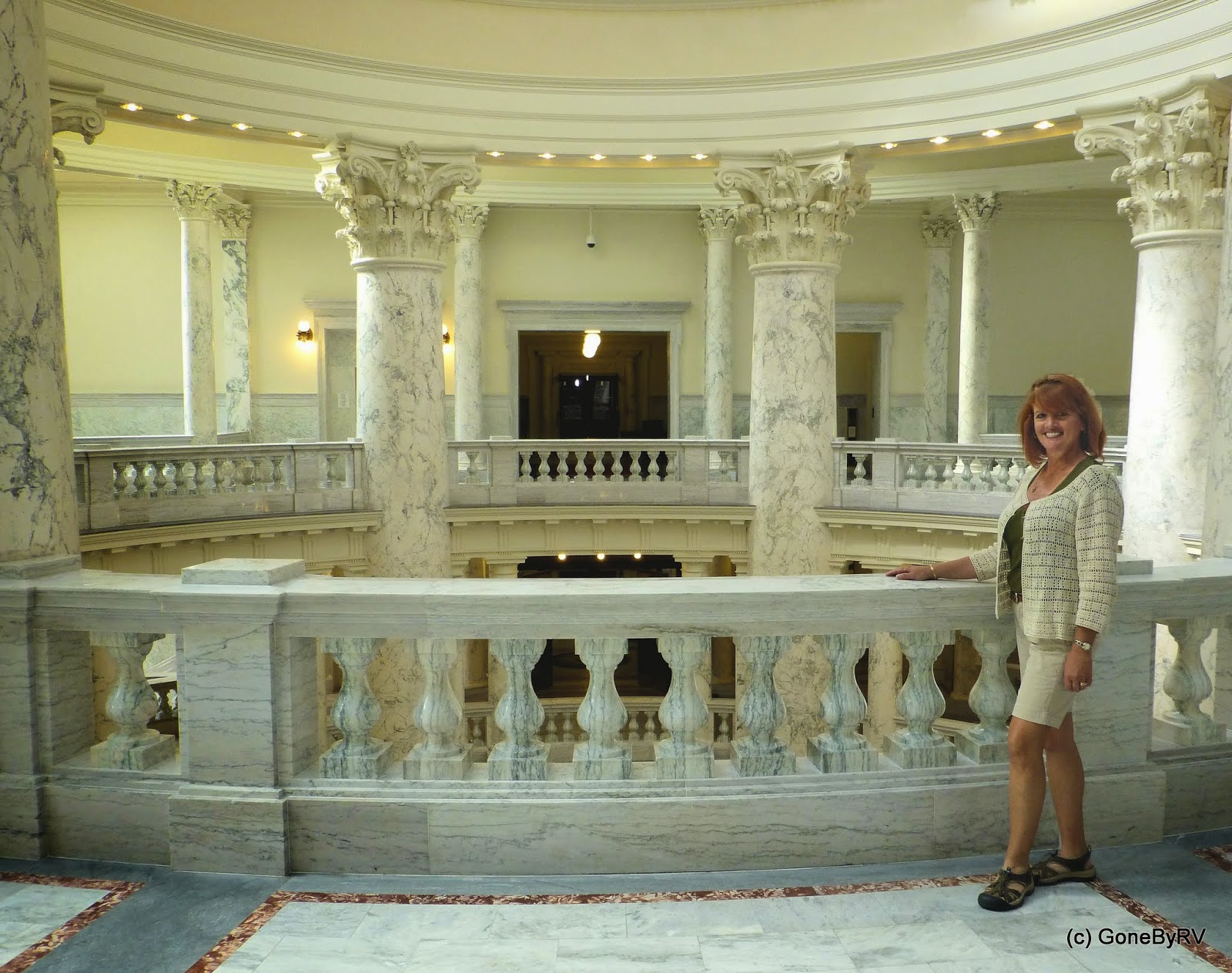 Here's a picture of Karen standing in the rotunda on the Fourth Floor.  Various types of marble are used throughout the Capitol, and unlike some state capitol's we've visited, very little wood is used. 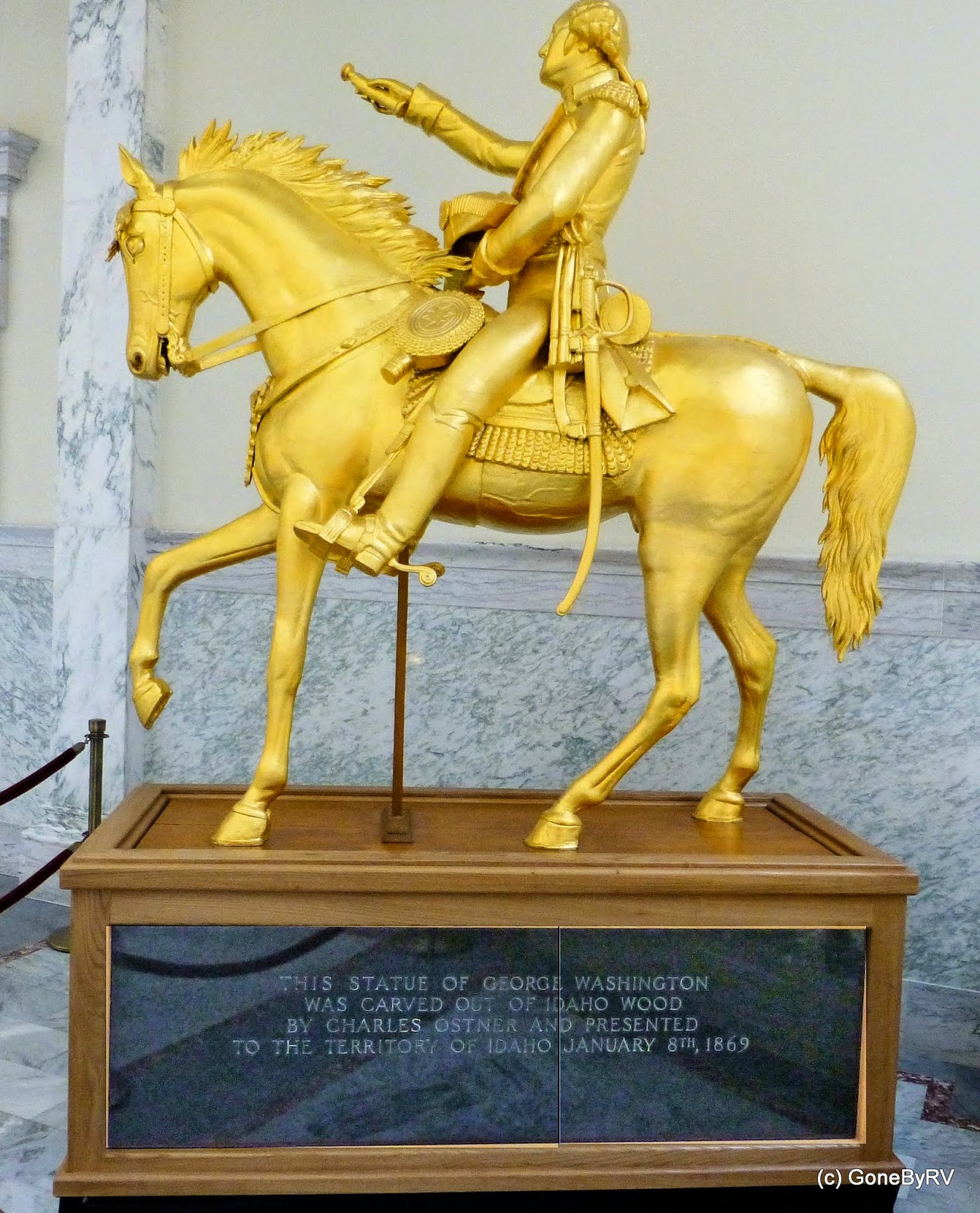 The Fourth Floor houses several statutes.  This one, George Washington Statue I found particularly interesting because it was carved out of a single piece of pine by Charles Ostner.  It was initially bronzed and presented to the Idaho Territory in 1869.  It was displayed outside until 1934 when it was brought inside due to weather damage.  It was repaired , restored, and covered in gold leaf in 1966. 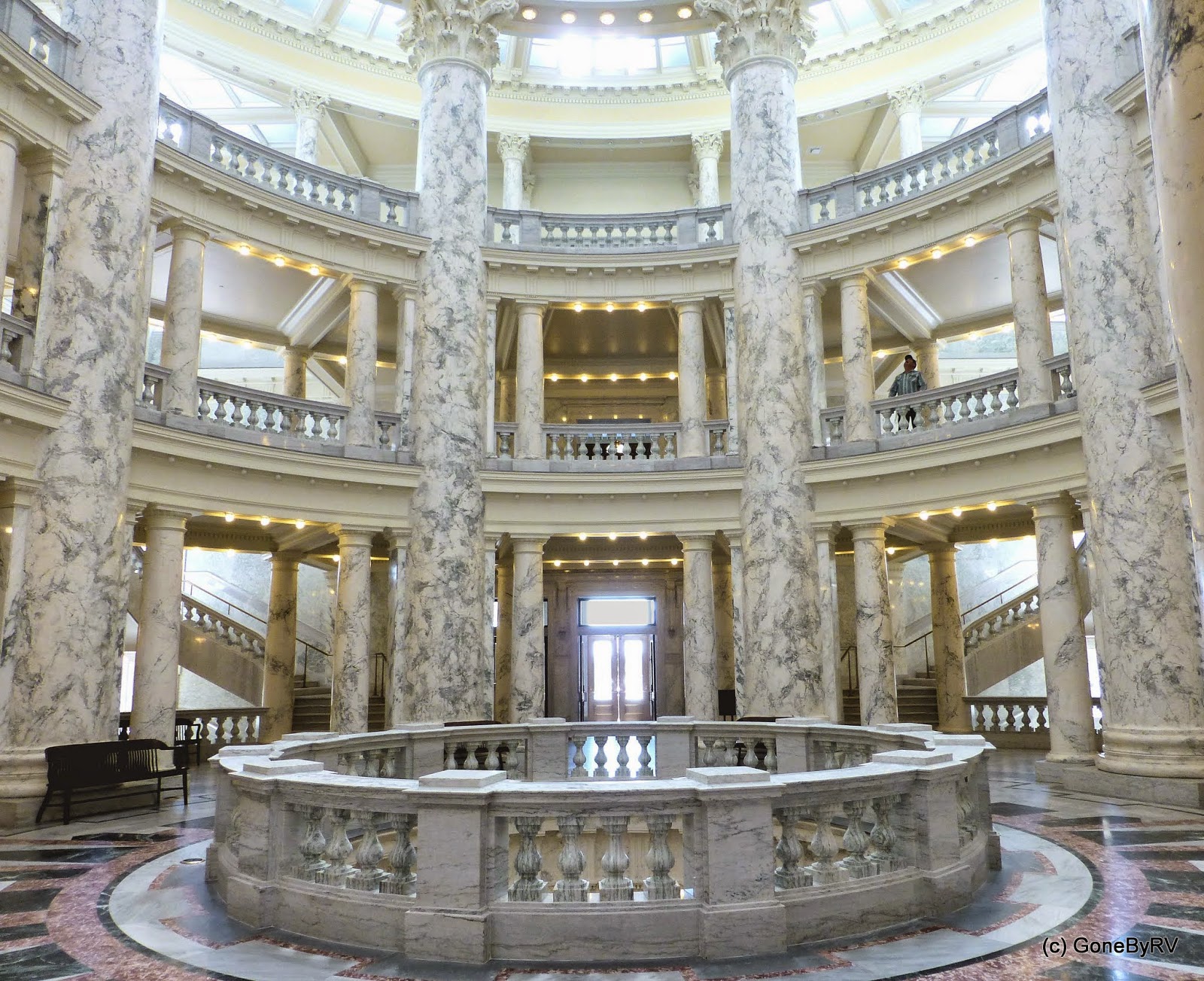 This visit was very relaxing due to the few people actually "touring".  The weather was beautiful and allowed for some nice exterior pictures.  The interior of the Capitol was more elegant than many of the state capitol buildings we've visited.