Visit to the University of Notre Dame

I'll be playing catch up with our recent activities in the next few blogs.

With our trouble described in the last blog behind us, we made it without further incident to Play-Mor Campground just east of Bremen, IN on April 30th.  We stayed here until May 7th and visited a few local attractions from here. Play-Mor was easy to maneuver and made for a very restful stop for the week.  At this time of the year, transient rigs were still few and far between.

This past Friday (May 2nd) we took a tour of the Newmar motorhome factory in Nappanee, IN.  It's just 5 miles east of the campground. Newmar is currently producing 7 rigs (of all models) per day. It was a very different experience from the Tiffin factory (which we have toured several times) as the inside of the factory was pretty quiet and there seemed to be few workers around for such a large building.  We found out that Newmar works on a "numbers" system.  When a designated number of units have been completed for the day, the workers go home. We did, indeed, see paychecks being handed out to many guys at 2:15 in the afternoon.  Not sure whether this is a good system or not, but I guess it works for them.  NOTE:  No pictures of anything to do with the inside of the Newmar factory because photos are not allowed.

On Monday (May 5th) we attended another minor league baseball game.  This one pitted the local South Bend Silverhawks against the Bowling Green Hot Rods.  The teams play Class A ball in the Midwest League.  The Silverhawks are the Class A team for the Arizona Diamondbacks of MLB.

The game was pretty close until Bowling Green pulled away in the 8th inning.  The final score was Bowling Green defeating South Bend 9-4. 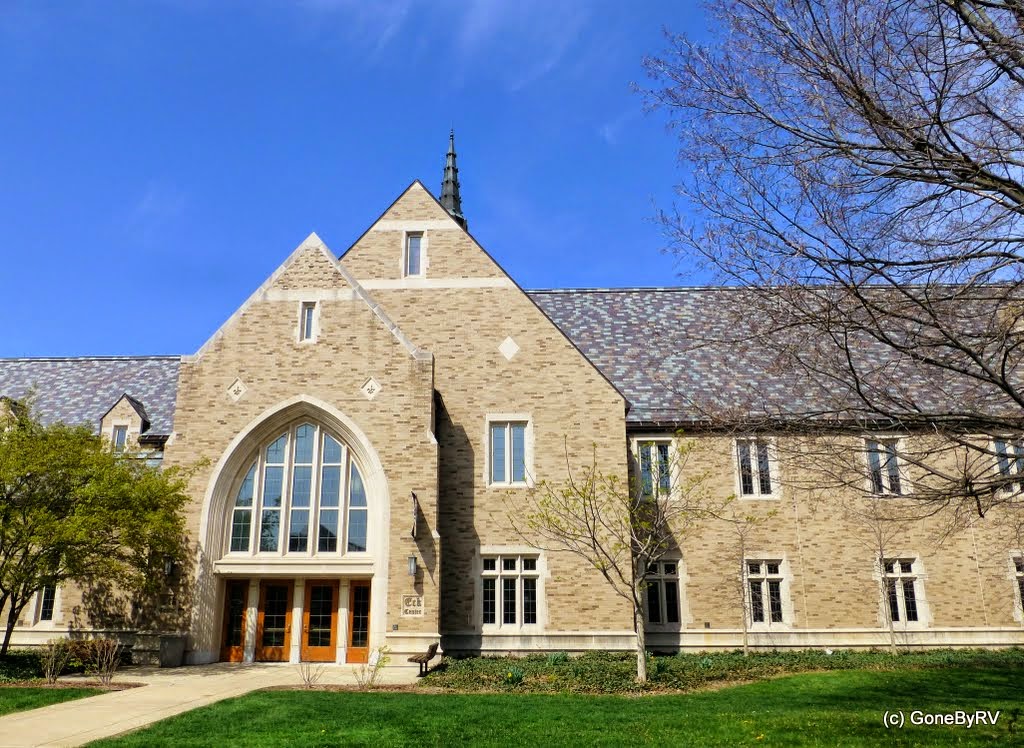 One of the highlights of the area attractions so far involved our visit to the University of Notre Dame on Tuesday (May 6th).  Using the internet, we found out that public tours were conducted twice a day via students acting as guides.  Because the campus is large I used a few internet tools to determine the location of Eck Centre, the starting point for the tours.  Eck Centre houses not only the visitor's center, but also acts as the Alumni Center.

The adventure began in a not-so-smooth fashion as I first encountered the manned gate nearest the Eck Centre. I had already determined that parking for the Eck Centre was available at the Bookstore.  I also knew that the tours generally lasted between 75-90 minutes.  Unfortunately, the security person at the gate advised that parking in the Bookstore lot was limited to 1 hour.  I asked how strictly this was enforced.  He advised that they "mark" tires and make a lot of money from parking tickets.  Uh Oh!!  In the end, he gave us a one day student parking pass which allowed us to park near the stadium.  All was good. 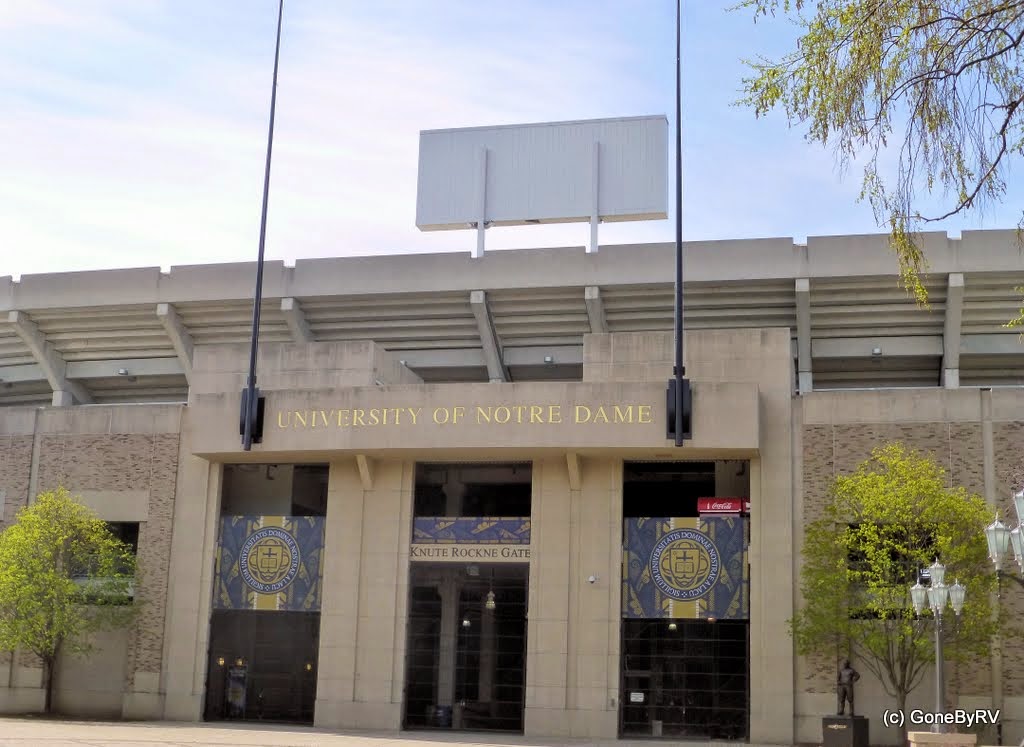 Speaking of the stadium,  you can't think about Notre Dame without thinking about football.  We were taken to the outside of the stadium's main entrance, but the stadium itself is a separate tour. 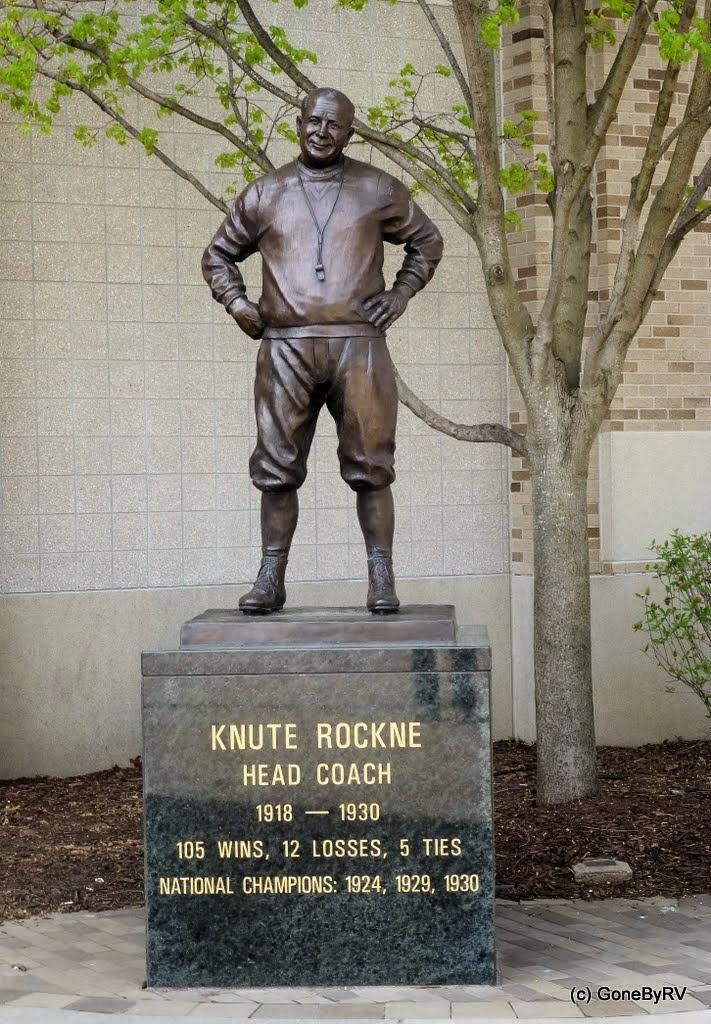 You can't think about Notre Dame football without thinking about Knute Rockne.  Unfortunately, Coach Rockne only coached in the stadium for 1 season after being so instrumental in its' building.  Coach Rockne died in a plane crash in 1931. 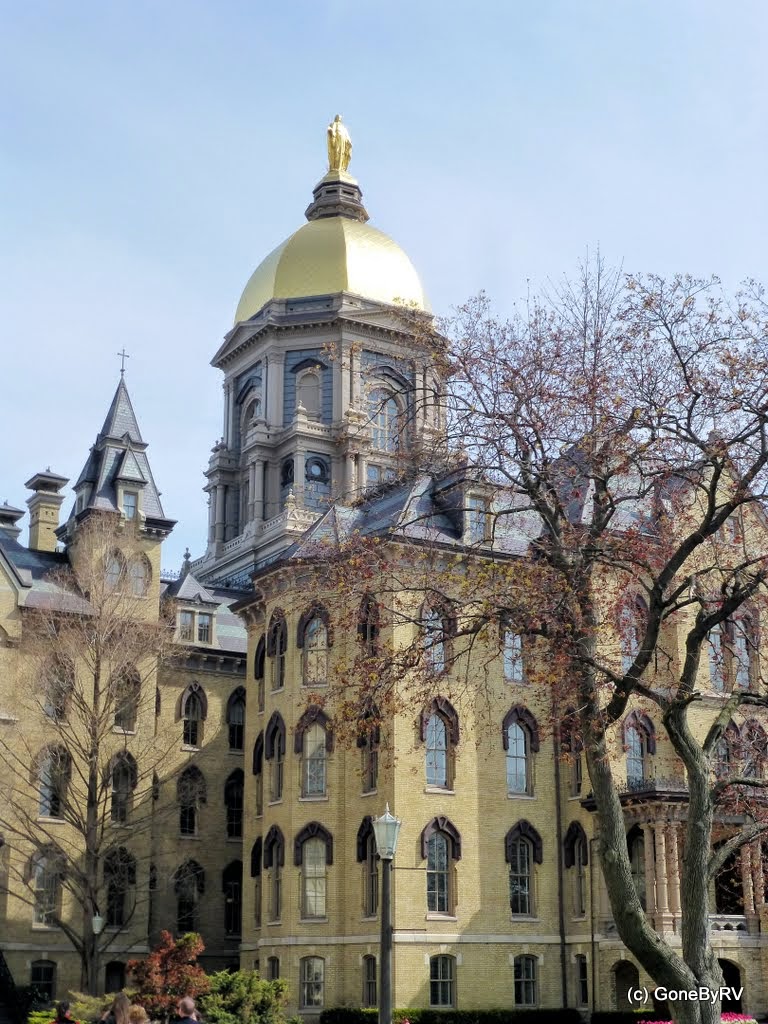 Another icon at the University is the "Golden Dome". This building today houses administration offices and some class rooms, but in earlier days served as a true campus crossroads for the University.  The dome is gilded with real gold, but only about a "fistful" to cover the entire dome. 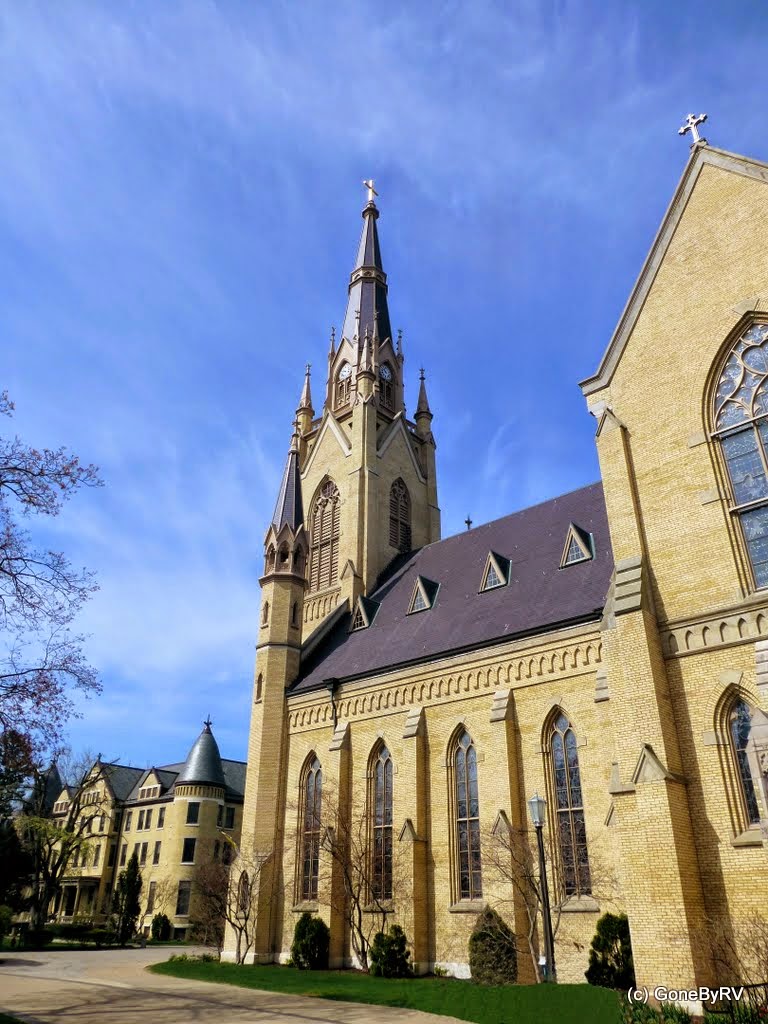 One of the prettiest buildings has to be the Basilica of the Sacred Heart.  It took over 20 years to complete and houses the largest collection of French stained glass in the world. The louvered arches house 24 bells, 23 of which comprise the oldest carillon in the United States. 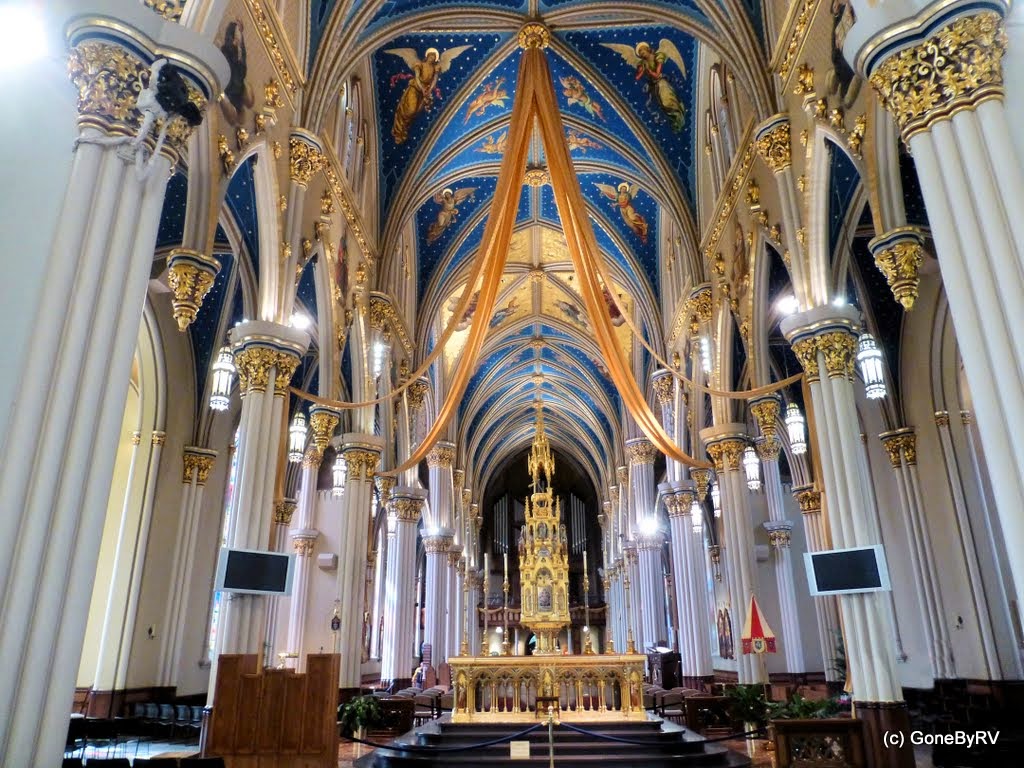 The interior was beautiful.  I would have loved to have heard the massive pipe organ play.  The amount of gold gilding, combined with the sunlight entering through the beautiful stained glass windows was breathtaking. 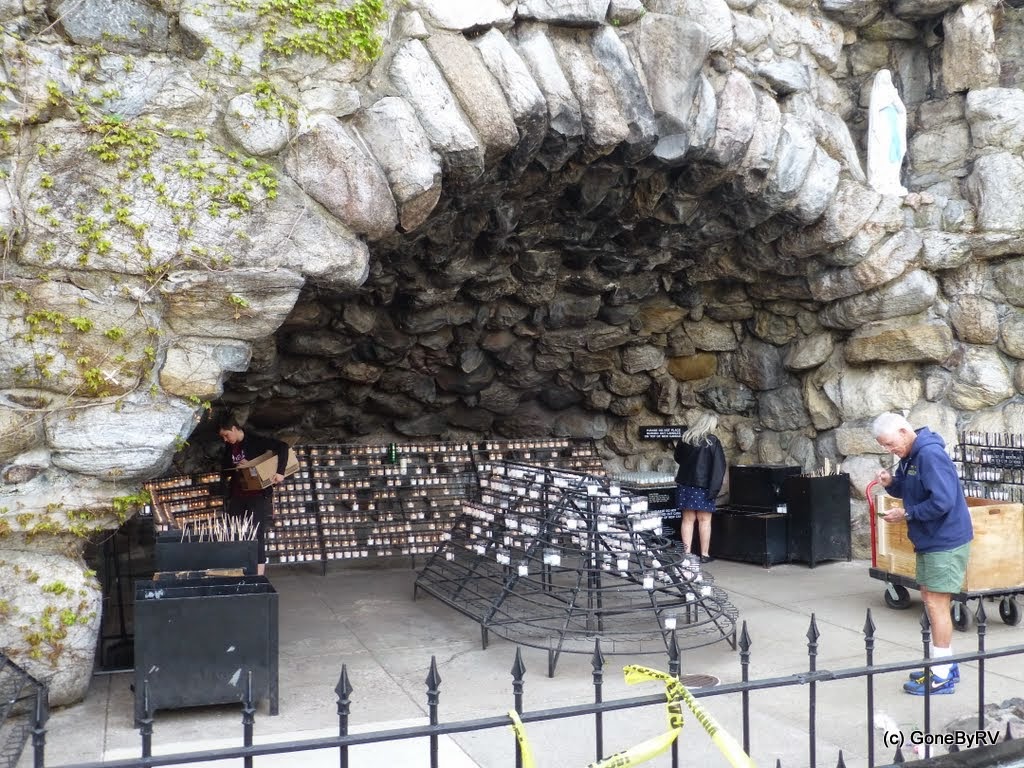 Just behind the Basilica of the Sacred Heart is the Grotto of Our Lady of Lourdes. This is a 1/7 sized replica of the famous cave near Lourdes, France. 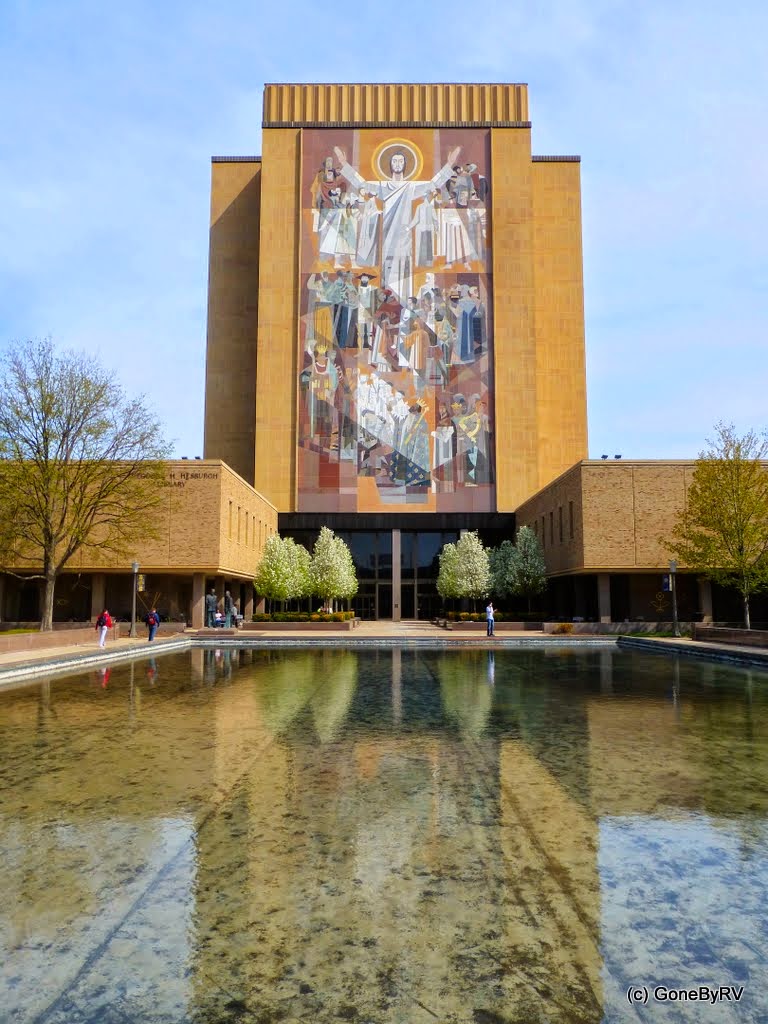 One of the more modern looking buildings is the Hesburgh Library.  When it opened in 1963, it was the largest college library in the world.  The guide indicated that it has since been surpassed by several other colleges, but it's still impressive nonetheless.  The tiled mural on the front of the building is entitled "Word of Life" and towers 132 feet tall and 65 feet wide.  Again, because a lot of Notre Dame life is tied to football, the students call the mural "Touchdown Jesus" as the mural can be seen from the north goal post of the football stadium.

It was a beautiful spring day when we took the tour.  The students are in the middle of taking final exams as  commencement at the University of Notre Dame is May 16-18.  If you ever get a chance to tour the University while in the South Bend, IN area, it is a very worthwhile experience.

Hopefully, the next blog will bring me up to date and tell a bit more about why we're in this part of the country at this time.

Thanks for stopping by to take a look!
Posted by Steve and Karen at 11:41 AM

Email ThisBlogThis!Share to TwitterShare to FacebookShare to Pinterest
Labels: University of Notre Dame