After leaving the Escapees Escapade at the Elkhart County Fairgrounds on Sunday morning, we headed back north for a short stay again at Elkhart Campground.  On Monday we attended an inaugural seminar put on by Nick Russell (Gypsy Journal Newspaper) entitled "Publishing For Profit". This included subject areas such as blogs, books, website publishing, apps, niche guides, specialty tabloids, even weeklies and shoppers.  For a first time seminar, we thought he did a great job and we learned a lot.

On Tuesday morning I gathered with a few others for an informal discussion of blogging using Blogger and Wordpress. The session was led by Chris Guld of the Geeks on Tour. I always learn things at their seminars and classes, and today was no exception.

Tuesday evening we got a chance to go to dinner with Bill and Kris Osborne (writer of SeeingtheUSA blog).  Hopefully, we'll see Bill and Kris again at the Thousand Trails CG where we're currently staying.  Since I didn't have my camera with me, I'm stealing this picture from Bill's recent blog. 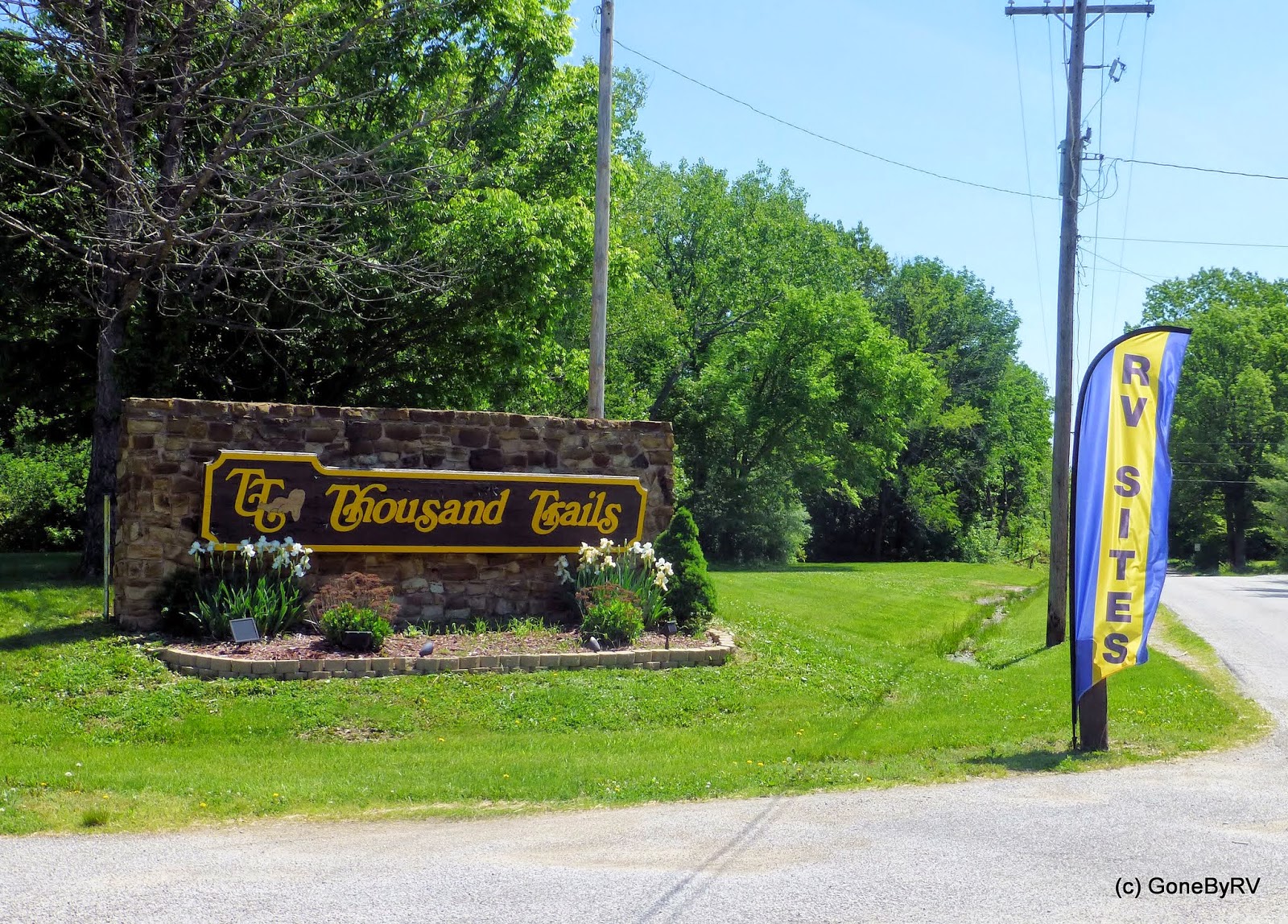 Wednesday morning we left Elkhart CG and headed south for a 4 1/2 hour drive to the Thousand Trails Horseshoe Lakes preserve near Clinton, IN.  I'm not sure what Indiana is doing with the money they collect for road maintenance, but they sure aren't using it to repair the roads.  Several very rough stretches encountered along the way. 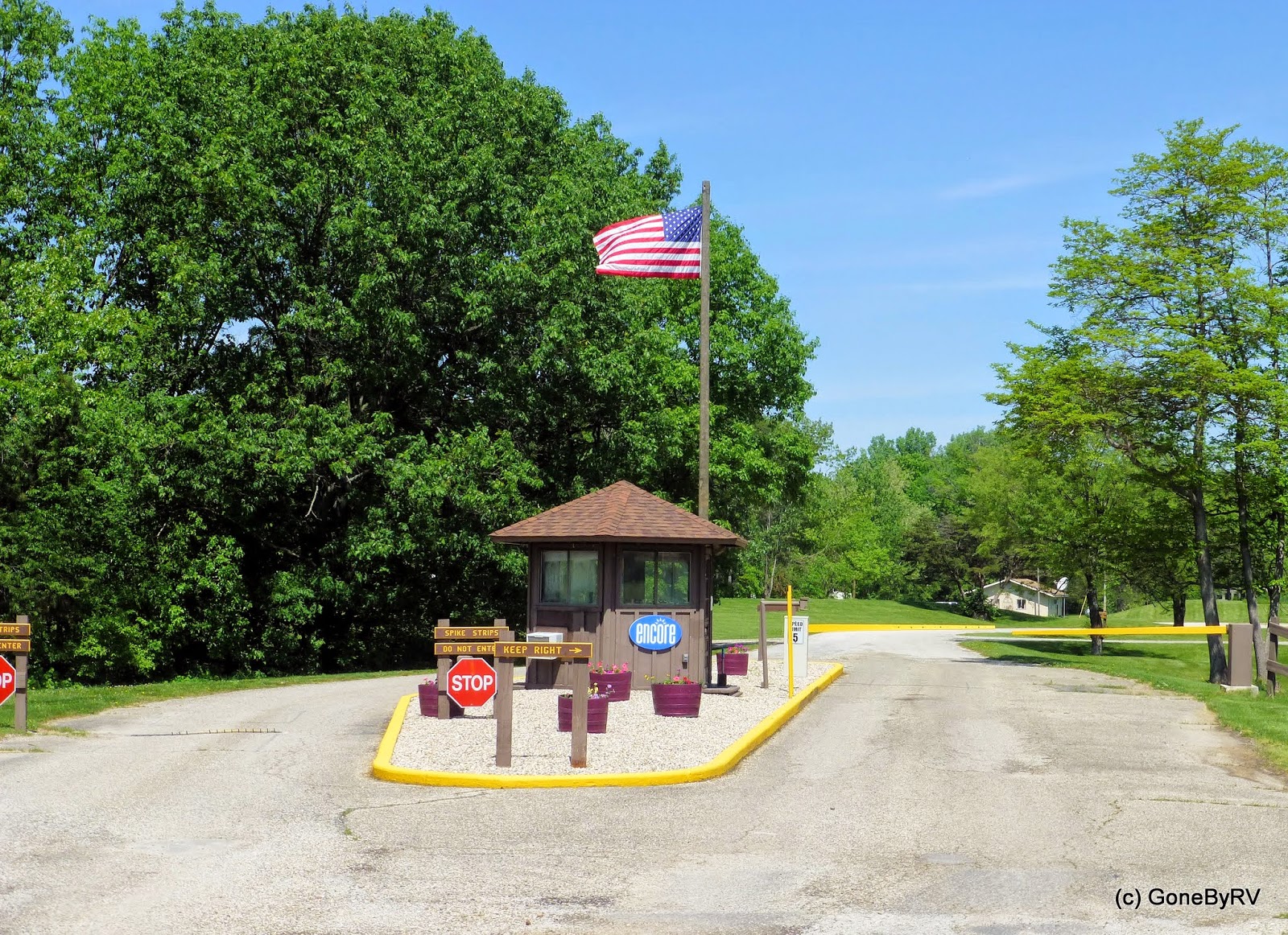 This is our first visit to this preserve. It is very large and could really be a nice preserve with some maintenance. As we've seen at several TTs recently, the main gate is seldom manned. 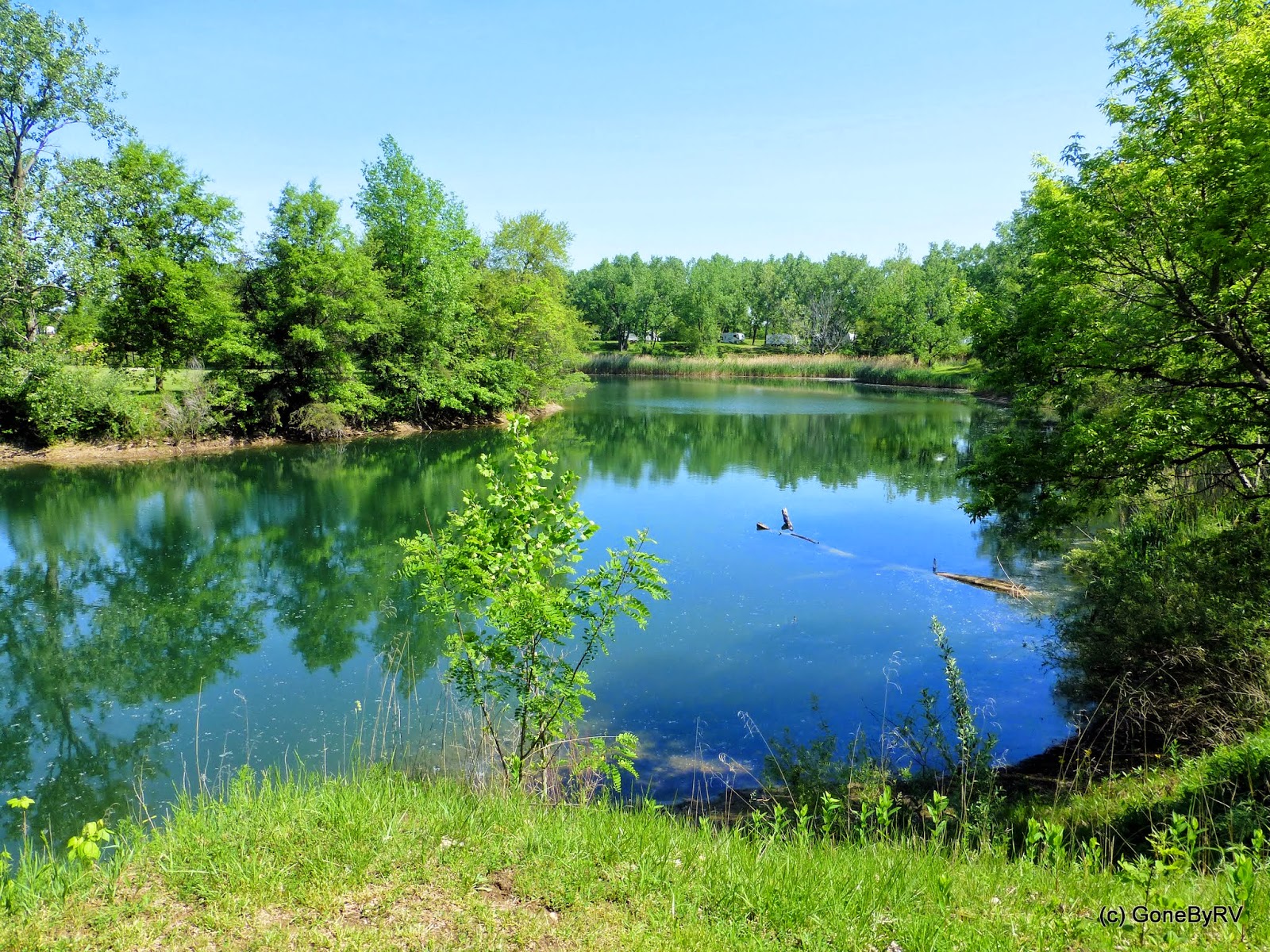 The large draw of this cg is the layout of the preserve around several lakes.  All very pretty.  This is the view from our site immediately across the road. 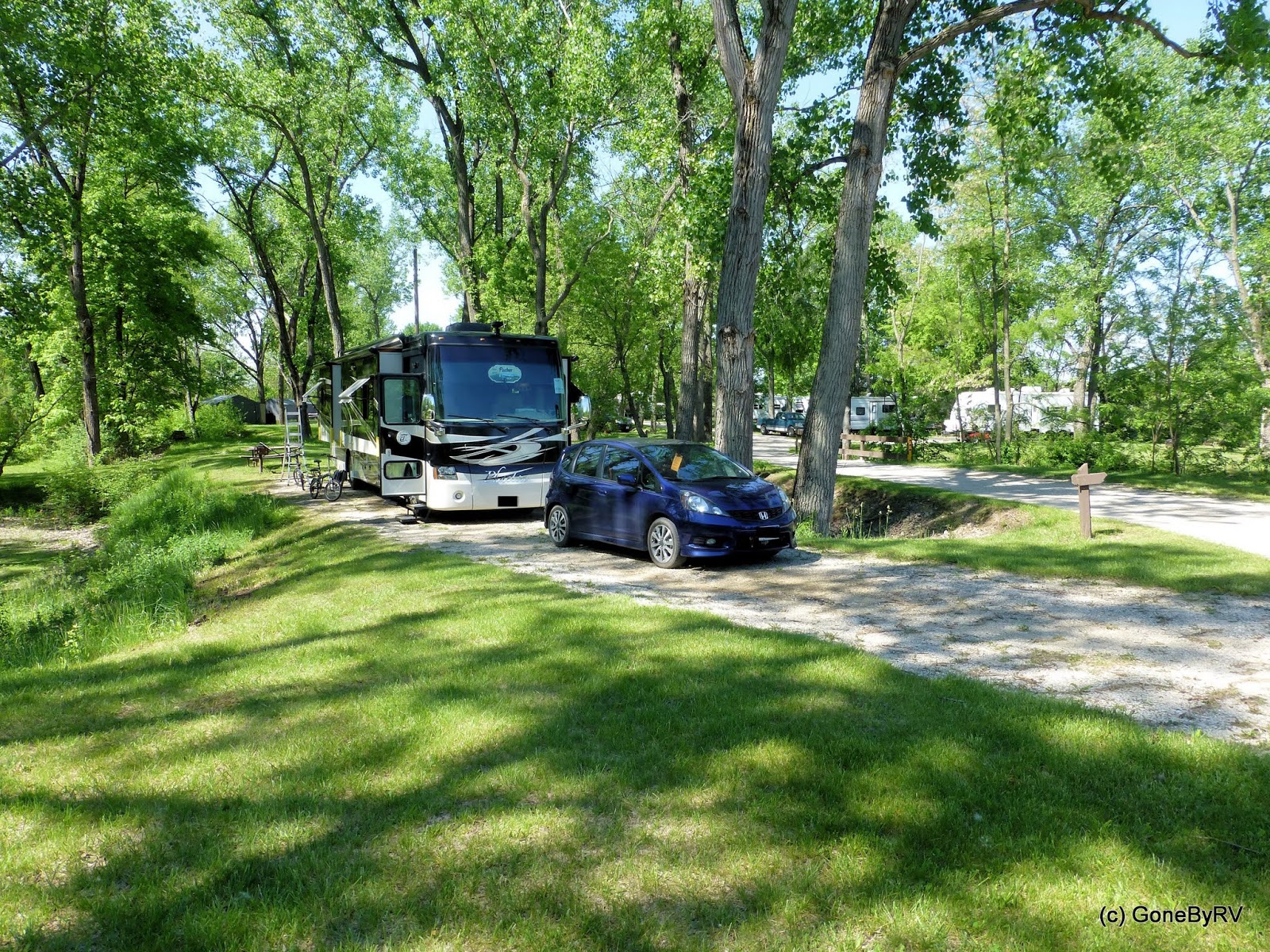 We came in mid-week, a few days before the Memorial Day weekend, because we expected it to be busy.  The great disappointment here (and at many other TTs) is the great number of annual lease holders occupying the prime sites, and at this preserve, the majority of the sites in general.  We were lucky, however, and got a nice site with 50 amp service. 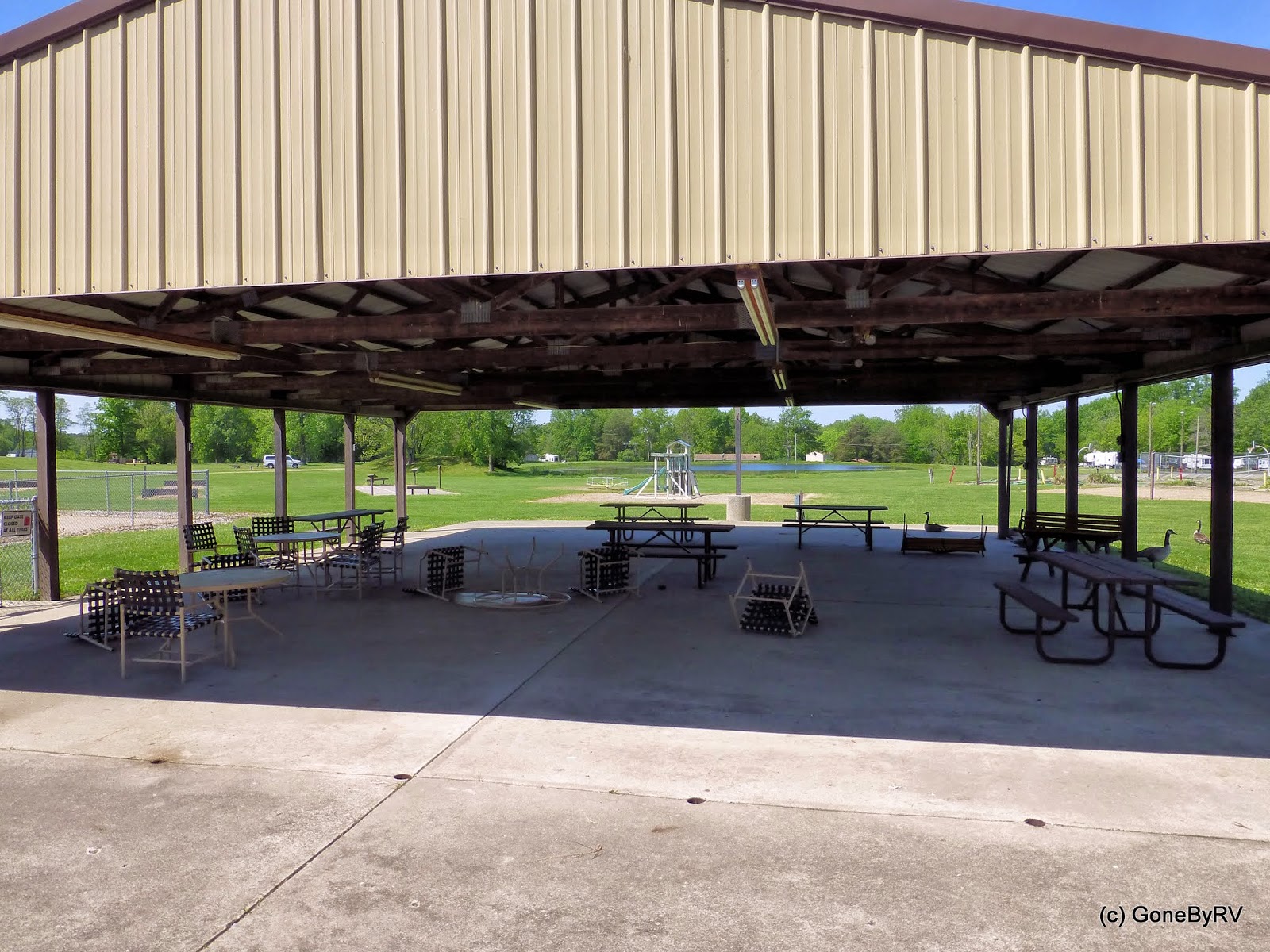 The preserve looks as though it's short on employee help.  This is the official beginning of the "camping season" and there's still a lot of work to be done here.  Notice the pavillion chairs and tables. 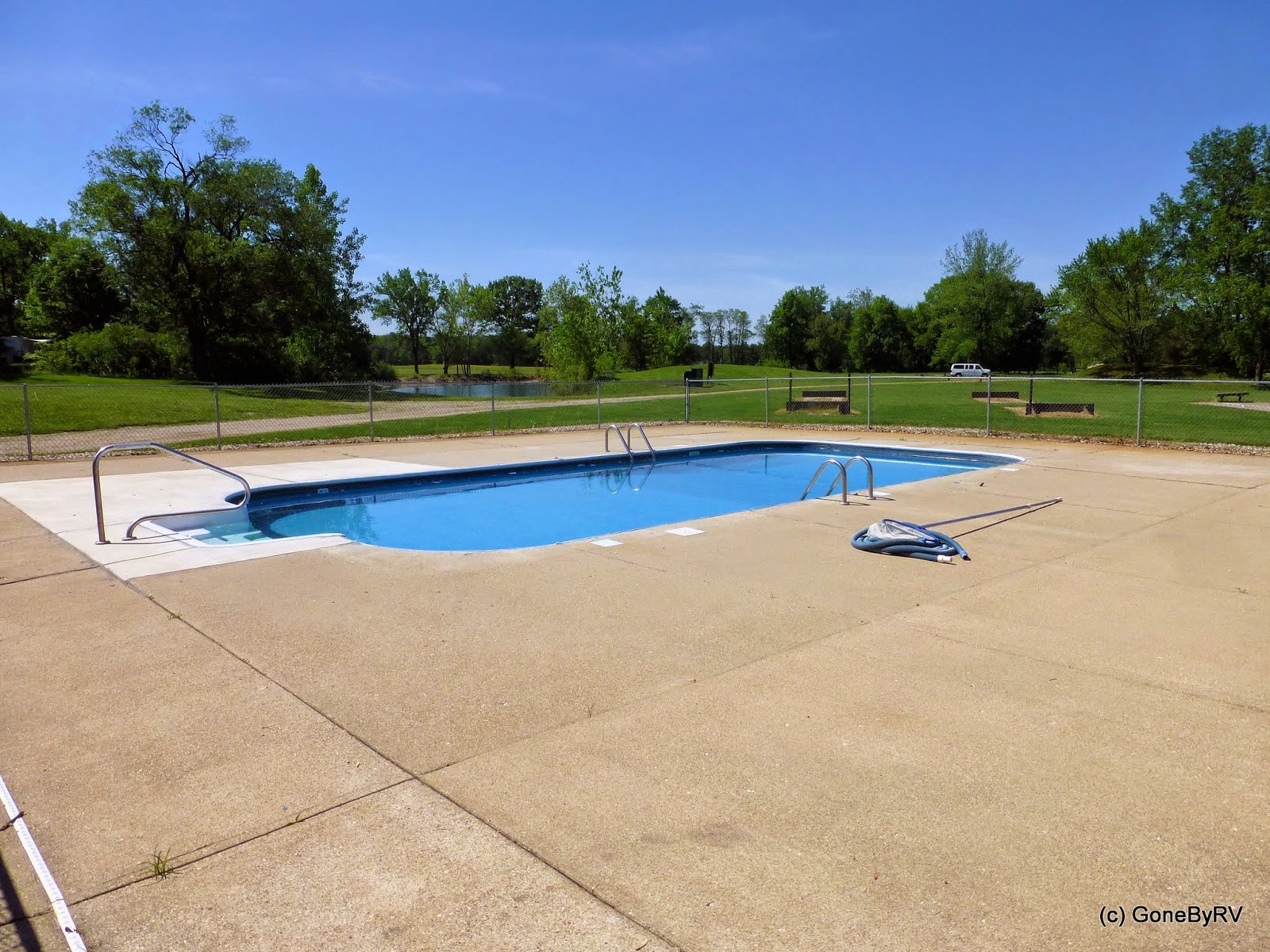 The pool looked clean, but again, no loungers around the deck. Hey folks, the holiday weekend begins today! 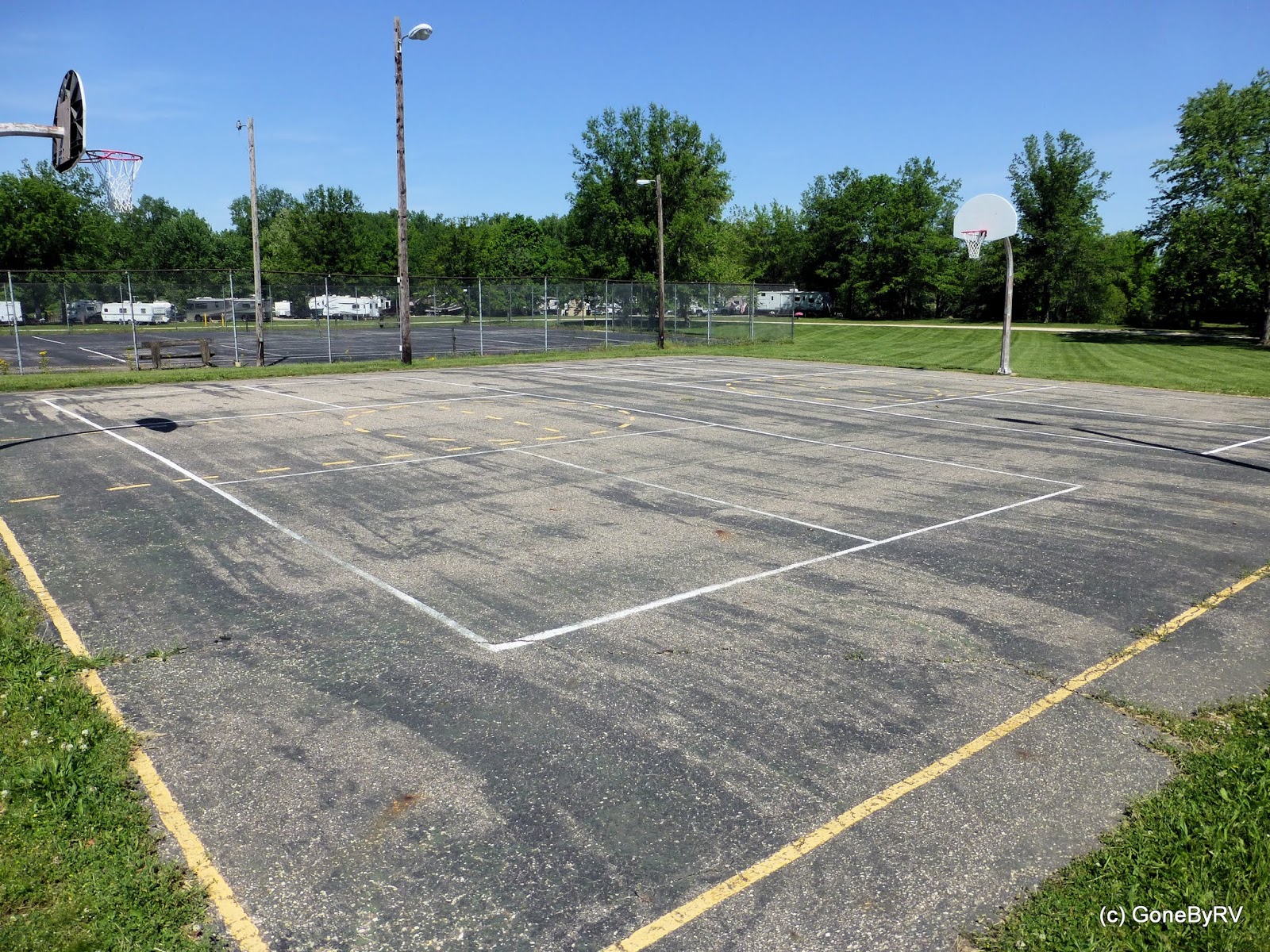 Of course we had to look for a place to play pickleball.  The basketball court looks as though someone has marked off two pickleball courts, but that was about it. 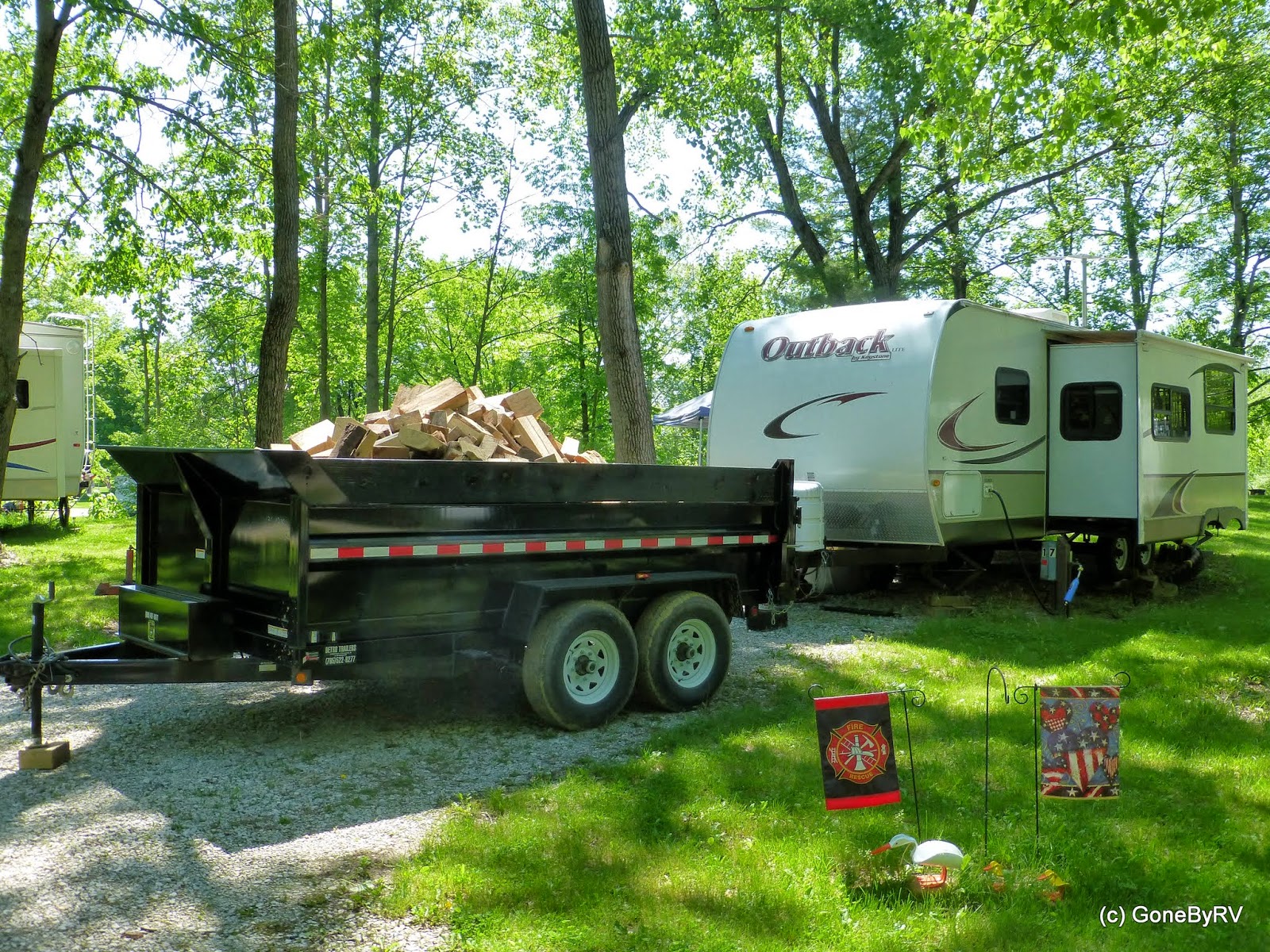 The preserve is good for bike riding and it looks as though this site is ready for quite a few camp fires this season. 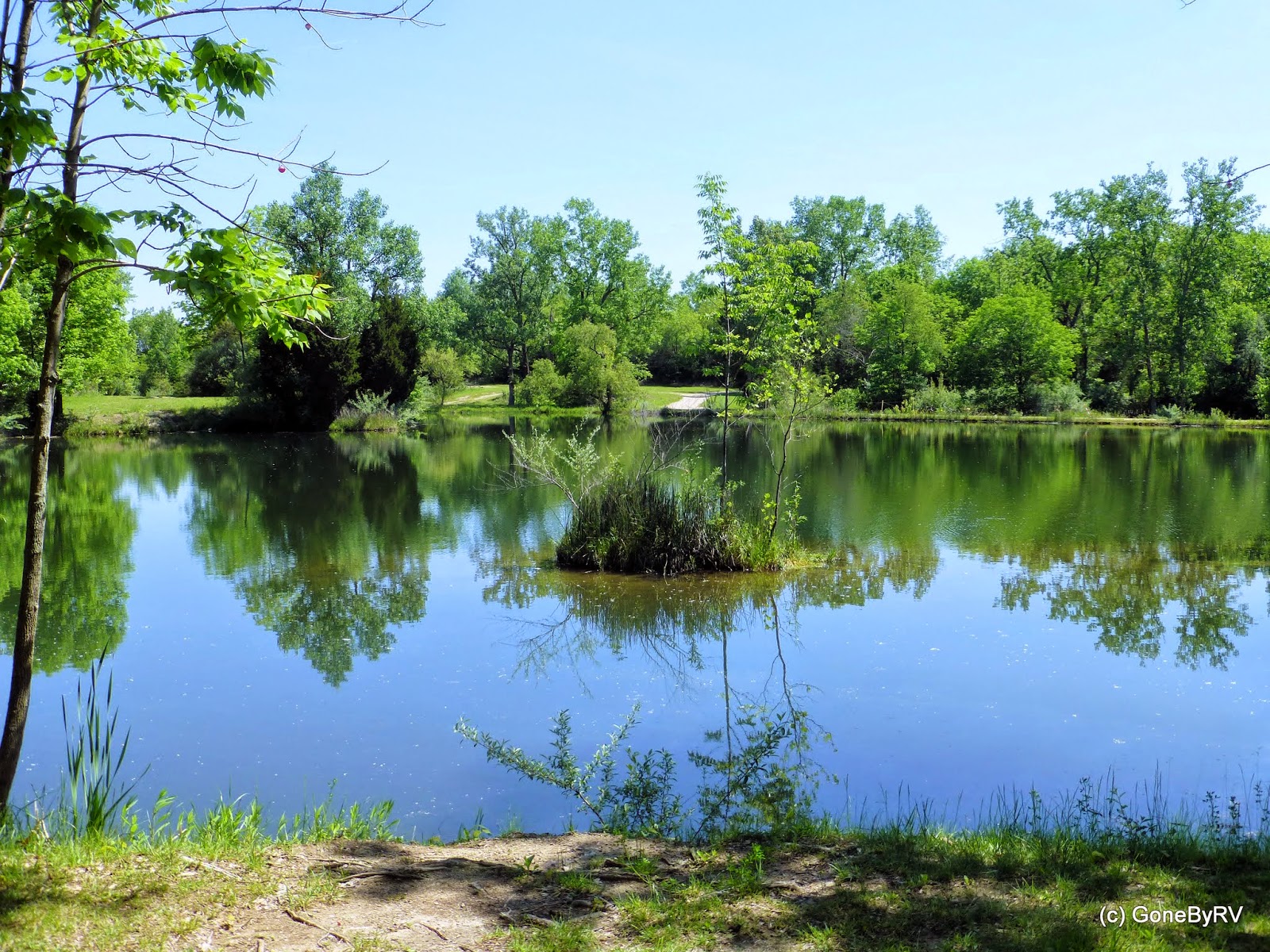 Many of the sites are positioned along one of several lakes which wind throughout the preserve. Boating and fishing are allowed, but no swimming. 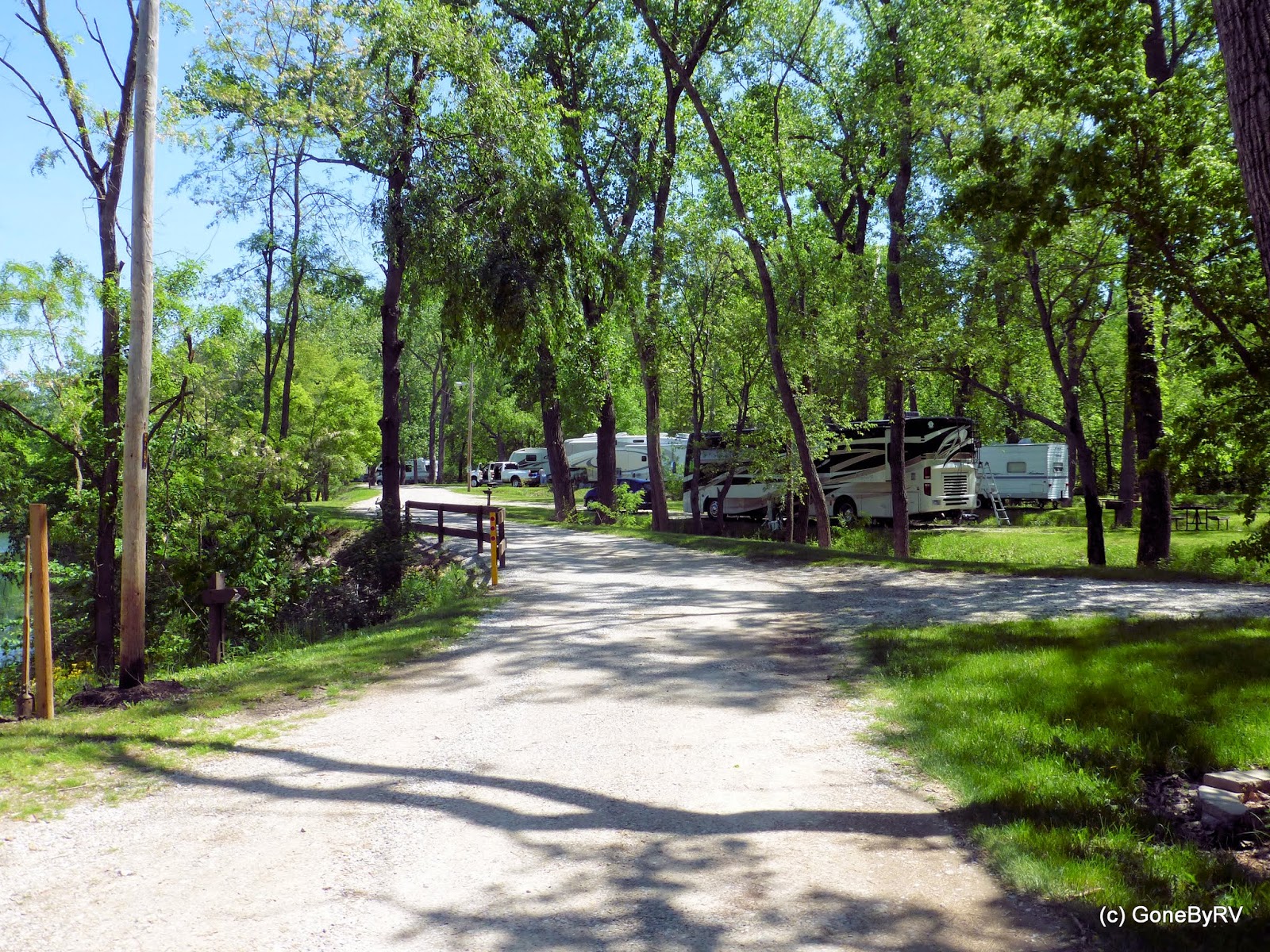 The roads inside the preserve are in pretty good condition, although the "A" section does include some hills and curves which might be difficult for larger rigs.  We are parked in the "B" section and it was easy to enter the site.  All are back-ins.

Our next blog will include a small project on the rig. Stay tuned.