Nice Walmart for an Overnight and a Bit of Trouble

This will be a short blog for today as it just speaks to a bit of travel.

We left Dumfries, VA Tuesday and began our journey toward Goshen, IN and the Escapees' Escapade.  We ran into rain almost the entire journey.   I don't mind driving in the rain, but it sure gets the coach dirty.

We usually stay in campgrounds as we travel, but for just an overnight stay I just hate to pay for a site when all we're going to do is catch a late dinner and sleep before proceeding early the next morning.

The route we chose dictated that we head thru West Virginia and western Maryland.  A bit of a hilly ride for the east coast.  We decided to stop for the night just east of Wheeling, WV (near Triadelphia).  We had stayed at the Cabela's lot on a prior trip, but after talking to our friend Bill Osborne (Seeing the USA blog) we decided to try the Walmart in the same general area.  Thanks for the suggestion Bill. 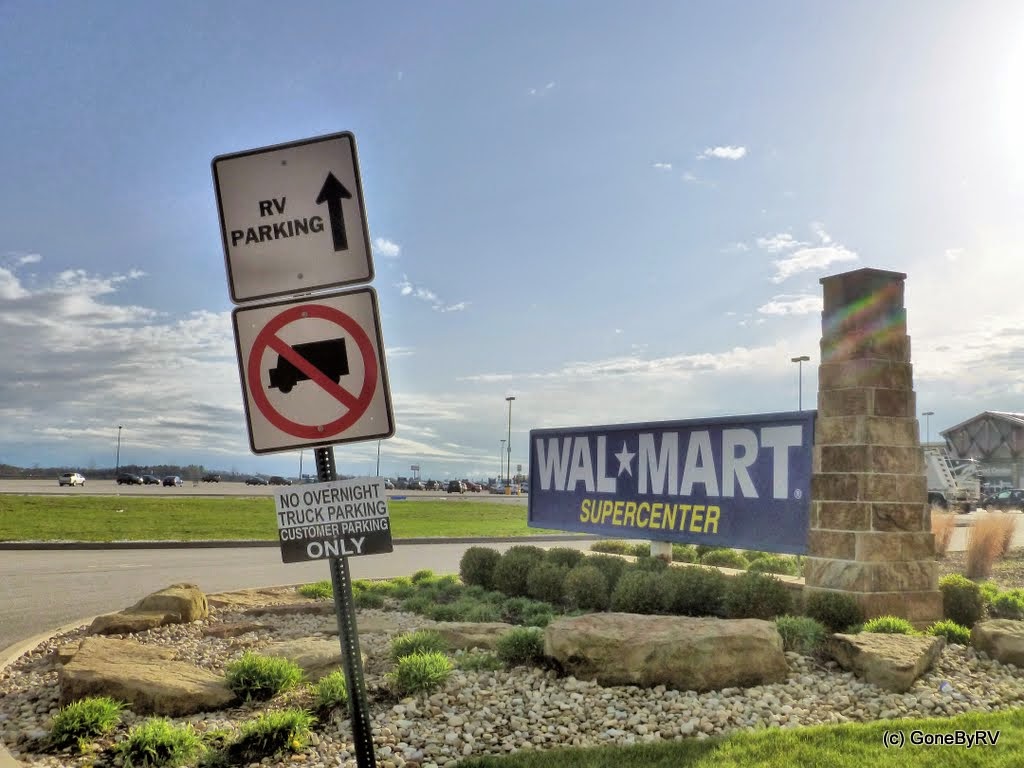 This Walmart was unlike others we had stopped, because the one here had a dedicated RV parking area. 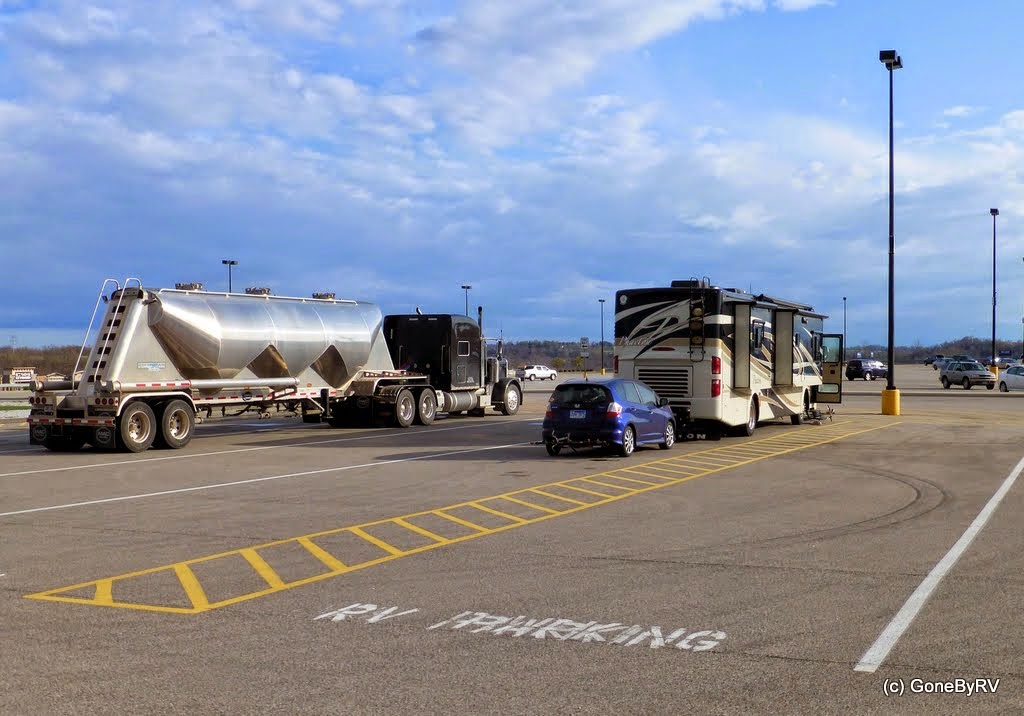 The area was divided from the rest of the customer parking and the sites were VERY long and easy to get into and out of.  There are about 12 spots here, but only 3 RVers for the night.

Did I mention that it rained almost the entire trip on us?  Earlier in the afternoon we stopped at a rest area in West Virginia for lunch.  While eating, our Tire Traker pressure monitor signaled.  It showed that we were losing air pressure on the left rear tire of the Honda Fit.  I threw on the raincoat and with tire pressure gauge in hand ventured outside threw the rain and heavy winds for confirmation.  Sure enough, the tire was now down to 19 PSI and I could see "something" protruding from the tread area of the tire.  This is one time when I wished that we weren't carrying two bicycles inside the Fit and two on the back.  Of course, that little temporary tire is stored under the bikes inside which necessitated removal of most everything. 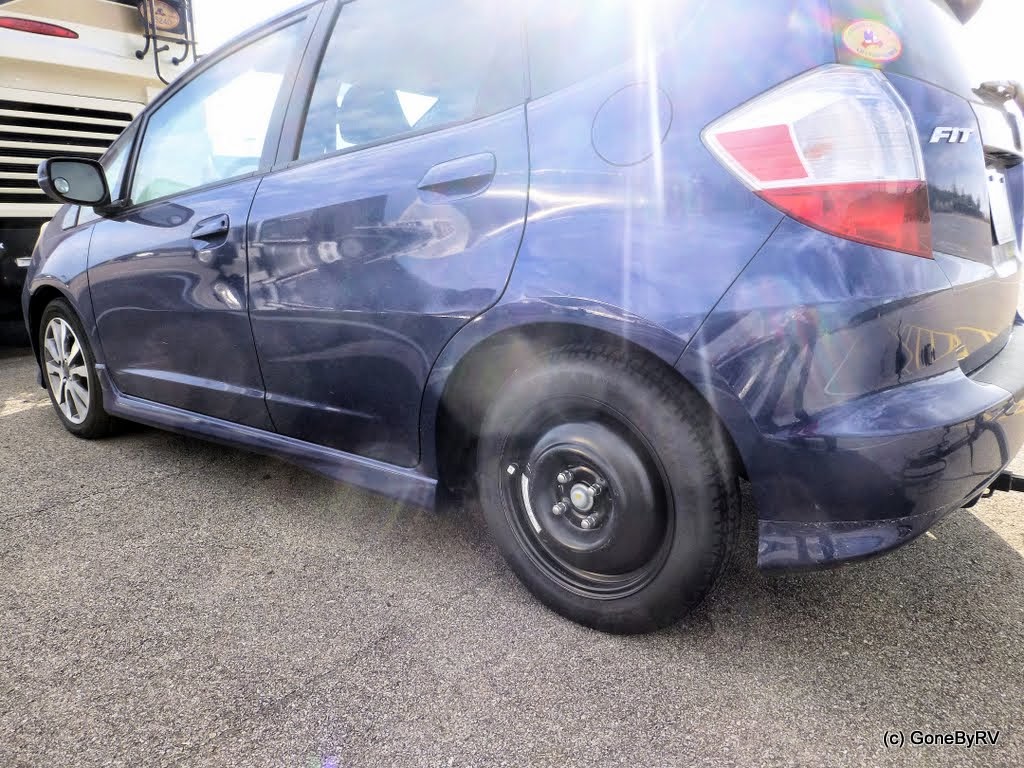 Got the tire changed and was able to drive to the above mentioned Walmart.  Karen had called ahead and found out that they could repair the tire, so that was our first order of business upon arrival.

The tire was repaired for $10 and made it successfully the next day on our trip to Indiana. Let me strongly urge to anyone who does not have some brand of Tire Pressure Monitoring System that you should certainly give it some consideration.  I will guarantee you that it would have been impossible for me to feel that low tire on the rear of the Honda Fit.  I'm sure that it would have been completely shredded before I would have "felt" anything. 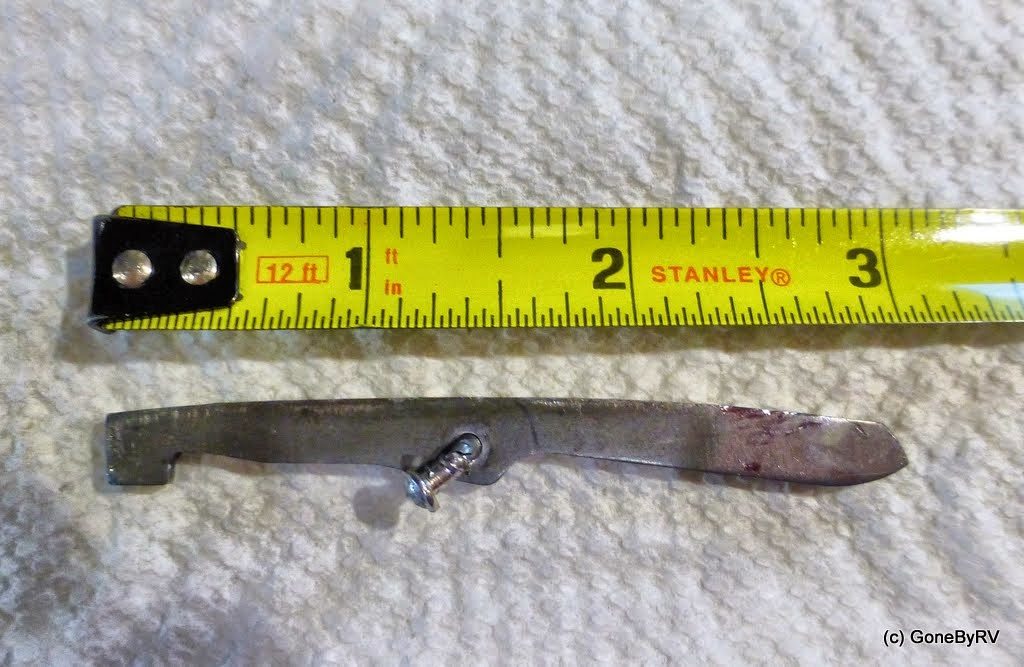 Oh yes, the item that was in the tread.  I would not have believed it had the Walmart guy showed me when he dismounted the tire from the rim.  I think it's part of the scissors section from a Swiss Army-style knife, but not certain.  I must have run over it at just the right, make that wrong, angle. Only about 1/4 inch of the part to the left was observable sticking from the tread.  The rest was inside the tire.

Oh well, just part of the "fun" of being a fulltimer.  We made it to our current destination in IN and we're safe, if not dry. (It's raining here again this afternoon.)