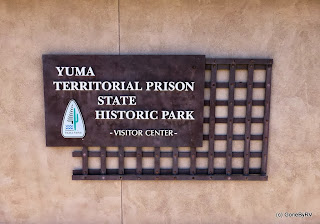 On Tuesday we visited the Yuma Territorial Prison.  Actually, it hasn't been a prison for many years, but is now part of the Arizona State Parks system.

The prison first accepted prisoners on July 1, 1876 and for the next 33 years 3069 prisoners (including 29 women) were held at this location.  The prison ceased to be a prison on September 15, 1909 when the last prisoners were transferred to a facility at Florence, Arizona.

The facility was neglected in the years to follow and much of the original facility was either altered to create a new bridge (to cross the Colorado River), or structures and equipment were vandalized or stolen, and the facility fell into disrepair.

Fortunately, a model is on exhibit to help visitors visualize what the prison looked like in use. 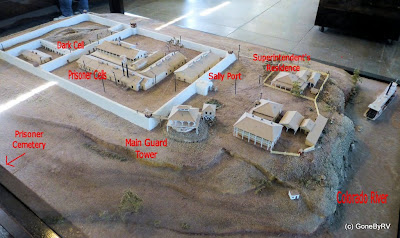 
From the date of closure, the prison’s facilities have been occupied and used by various groups. After Yuma High School burned, the High School Board rented four structures and used them from 1910 until 1914. The school athletic teams became known as “The Criminals”. The County Hospital utilized the facilities from 1914 until 1923. In 1924, the Southern Pacific Railroad demolished the western one-third of Prison Hill to make way for the new tracks. The Veterans of Foreign Wars leased the guard’s quarters in 1931 and used it as their clubhouse until 1960. Hobos, riding the trains in the 1920’s and 1930’s, stayed in the cells, and homeless families during the Great Depression lived in the cells. 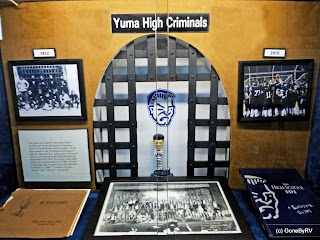 The museum has a display which speaks about the occupation of the facility by the Yuma High School from 1910-1914 and also details how the school's mascot "the Criminals" came into being. The school's football team was playing a game against a Phoenix team, which was highly favored to win, in the early years and the opposing team began calling the Yuma team criminals.  After Yuma won the game, they embraced the name (shortened it to the "Crims") and fashioned a mascot using the face of a "hardened criminal".

The museum details the first day of a new prisoner's life at the prison.  Some of those details included being photographed for their "mug" shot. The prison used a mirror placed at an angle to the prisoner so that a frontal and profile could be taken with the same photograph.  Of course, Karen and I had to take the opportunity to see what we'd look like as prisoners in the late 1800s. 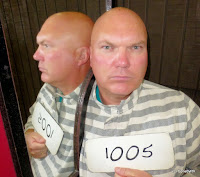 Actually, I somewhat resemble some of the criminals in the period. 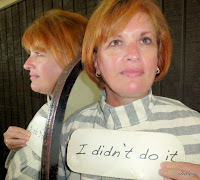 Karen has way too much hair to be a prisoner. 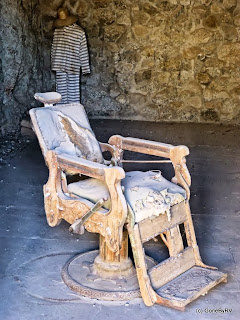 Actually, prisoners were sent to the barber when they first arrived. 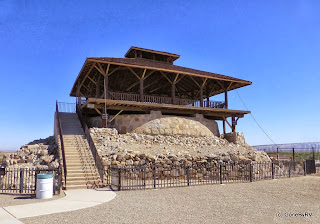 Although much of the original prison is gone today, several structures survive and give the visitor a feeling for the institution  back in the late 1800s.  The first is the main guard tower.  The tower was actually located outside the wall of the prison, but had a catwalk over to the wall which surrounds the prison. The area atop the prison walls were 5 feet in width and allowed the guards to move quickly between the corner stations. 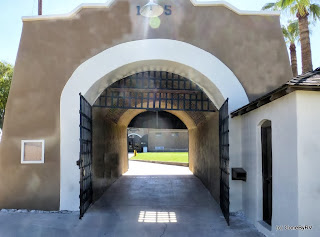 The only entrance from the outside was thru the main entrance, or sally port.  The sally port entrance was large enough so that a wagon could be pulled between two iron gates, then searched, before allowing entrance or exit. 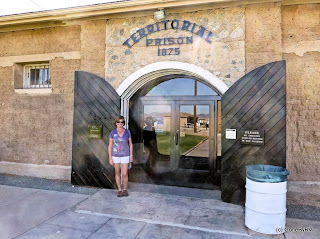 Today, once past the sally port, the visitor comes to the museum.  In the days of the prison, the museum now occupies a structure which was the mess hall for the prisoners. 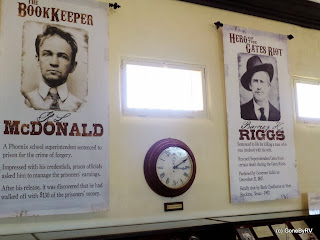 There were a wealth of interesting displays in the museum which detailed the various offenders which were sent to the Yuma Territorial Prison. Offenders included everything from adulterers to bank robbers, forgers to murderers. 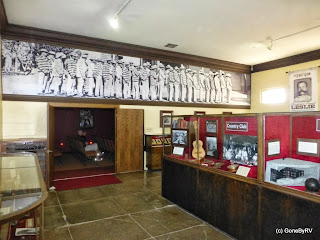 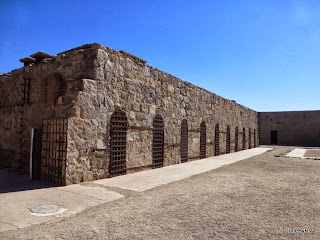 Once exploration of the museum is complete, the next area to visit is the actual cell blocks which housed the prisoners. 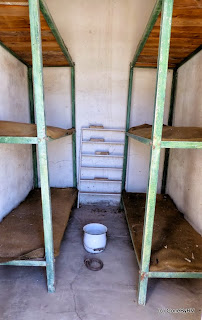 A view into each individual cell really "brings home" the point of how miserable it must have been to be imprisoned in this part of the country in the summer.  Each cell holds 6 prisoners with one shelf (along the back wall) used to house property and a single pot in the middle of the floor used as a toilet. 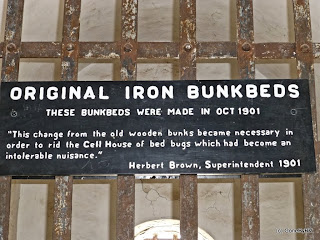 Originally, the bunks were made of wood, but due to bug infestation, metal replaced them.


Unruly prisoners, or those who broke the prison rules, were sent to the "dark cell".  This was a single cell carved into the rocky hillside which housed up to 14 prisoners at one time. There was no toilet, only a grate on the floor.  Prisoners were fed bread and water once a day while inside. They were chained to the wall or a point in the center of the floor. Punishment usually ran from a few days to a week or two, but one man actually spent 120 days in the dark cell. 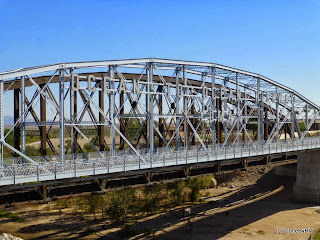 Moving away from the prison, a bridge known as the "Ocean to Ocean Highway Bridge" was completed in 1915. At first, I'm thinking ocean to ocean?  Then I learned that before the completion of this single-lane bridge it was necessary for vehicular traffic to divert 1200 miles to cross the Colorado River. This route followed the Old Spanish Trail which ran from St. Augustine, FL to Los Angeles, CA. The creation of the bridge and the bridge used by the railroad caused part of the Yuma Territorial Prison to be destroyed. 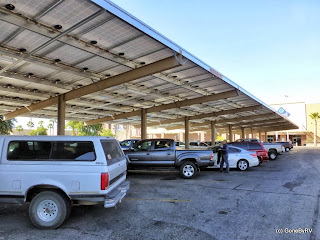 Now for something TOTALLY off topic for today's blog.  We visited the local Sam's Club in Yuma and we've decided that we really are in the Southwest (where, btw, it gets really hot in the summer) and saw the first canopied parking spaces we'd ever seen at a Sam's Club.  The top of the canopies have solar panels installed to take advantage of the "free" energy which is in abundance here.