Not Always Fun and Games

The fulltiming lifestyle is not always venturing out to see new things and take pretty pictures.  Sometimes we have to stay put and get a few routine chores and maintenance items taken care of.  That was the case today.  We've been spending the day emailing and making phone calls to get all of our insurance requirements for the Fit and the MH squared away.

We had been with Progressive Insurance for the MH since it was purchased in April, 2010.  Our other vehicles (and S&B) were with State Farm.  The Fit's insurance was due for renewal in January, so after doing some insurance shopping we've decided to place all of our vehicles with Progressive.  I thought "how hard could that be"? Well, as it turned out, a bit more than I thought.  Because we had recently switched all of our vehicle's registrations (and our driver's licenses) to South Dakota, the MH part of the insurance was almost like starting over.

Well, with the help of our agent Farm and City Insurance Services in Forest City, IA we were able to get thru the paperwork.  As FTers, we wanted to have personal liability coverage as well. For anyone not familiar with this type of coverage it is similar to coverage you would need if you still lived in a S&B house and the neighbor broke his foot climbing your steps. The additional coverage is relatively inexpensive and might be worth considering if you do not currently have this in place. 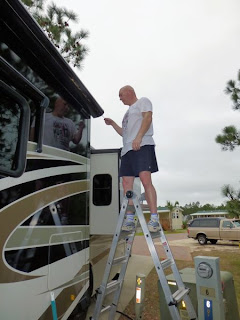 The cleaning process, fortunately, is not too difficult.  Obtain the proper allen wrench and loosen the top bolt while loosening the lower bolt enough to allow the can to swing upward on each end of the metal awning "cans". 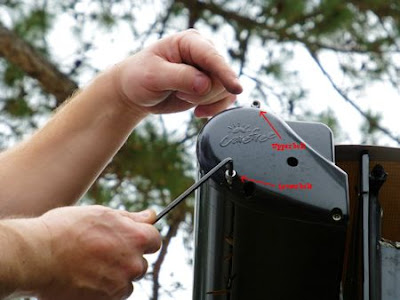 On our longer slideouts the awning "cans" have a bracket in the center of the roller which must be released. Again, simple after you do it the first time.  Since this was my first time, however, it took me a few minutes to figure out how it was secured.  It's actually very simple to release.  The lower part is spring loaded and a screwdriver pushing to the left will free that bracket so that the entire cover can be rotated upward. Once the covers were raised it's a simple matter of blowing or brooming off all of the debris under the metal covers.  To re-attach, just do the reverse as stated above. 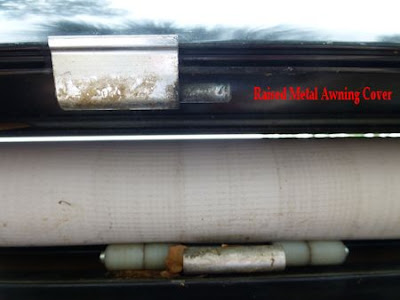 Pretty mundane stuff today, but hey, no one said that fulltiming was all fun and games.
Posted by Karen and Steve at 8:05 PM