Hangin' Around the RV Park and Dinner

Posted from near Willis, TX
(Click on Pics to Enlarge)

After several days of exploring the parks it was time to kick back and rest at the campground. 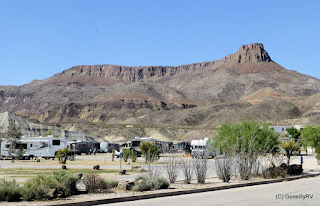 We stayed at Maverick Ranch RV Park  in Lajitas, TX during our stay in this area. The park is part of the larger Lajitas Golf Resort complex (right across the road).

The CG is located on Rt 170 between Big Bend NP and Big Bend Ranch SP, so the location was very convenient for visiting various attractions. 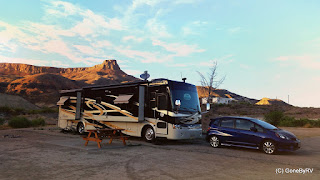 The sites are a bit different from many CGs.  When we made our reservations, Paul and Laura requested side-by-side (buddy) sites.  As in most CGs, we expected that one rig would be pulled in and the other rig would be backed in.  Well, that was the configuration, but we had so much room between us that most CGs would have parked another rig between us. Not griping mind you, just pointing it out. In the picture above, Paul and Laura's rig is way out of the picture. 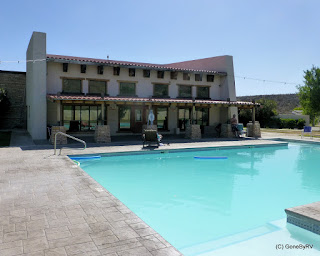 The utilities at this park all worked well, and the price was right.  We were able to use our Escapees affiliation to obtain a 20% weekly discount off of the published weekly rate.  There was a nice swimming pool and activities hall.  While we were here a small group was having a rally, so the park was probably a bit more occupied than normal at this time of the year. 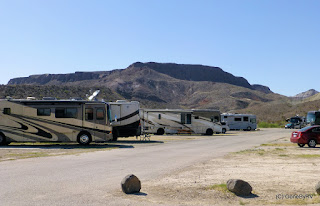 The roads throughout the park were wide and all sites are easy for bigger rigs to navigate.  In short, a very well laid out park. 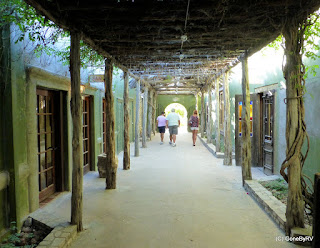 The first day we arrived, after getting the rigs set up, we wandered across the street to explore the "Resort" part of the Lajitas Golf Resort.  I'm not a golfer, but the course is supposed to set among one of the prettiest surroundings in all of Texas.
Actually, we were looking for a place to get something to eat, but the prices in the resort's restaurant were a bit more than I wanted to pay. (Yes, I am cheap!)  Here we are shown walking away dejected. 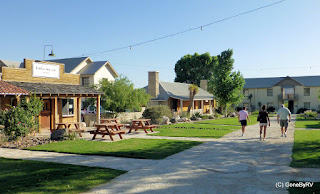 The building on the left contained the bakery. Laura traveled over one morning and purchased some very tasty cinnamon buns for breakfast.  Thanks again for that one Laura! 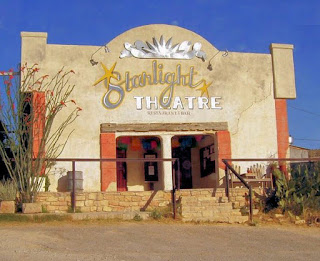 Getting back to Wednesday (our day of non-exploring), it was getting to be dinner time. Let me first say that this area has a very limited number of certain types of stores.  Grocery, ice cream, and restaurants stores are not that plentiful.  Karen did a bit of internet research and we decided to try a restaurant named Starlight Theatre Restarant and Saloon in nearby (about 13 miles) Terlingua.

The structure which today houses the restaurant was originally constructed in the 1930s as the Chisos Movie Theater and was a source of entertainment during the booming Quicksilver mining days.  The mines went bust in the 1940s and the theatre was abandoned. In 1991, the old theatre received a facelift and opened as the present-day Starlight Restaurant. 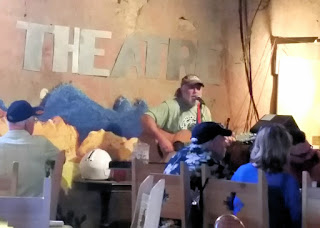 This was a fun place for dinner.  Live entertainment is provided throughout the week. We had a solo act on this Wednesday who was actually pretty good. 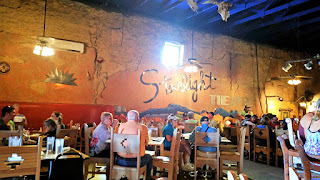 The dress is casual and everyone seemed to be having a good time. 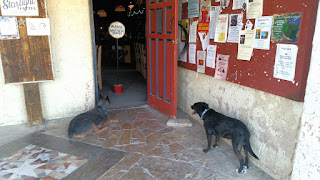 The place is definitely "laid back". Even the dogs outside the front door were in no hurry to get in. 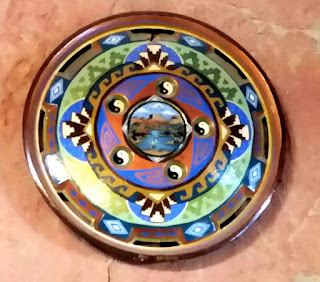 Some of the interesting artwork on the walls. This is a painted hubcap.

Ok, back to the National Park in tomorrow's blog.