Posted from Forrest City, AR  (Click on Pics to Enlarge) 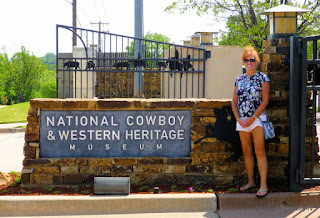 Since we were still enjoying free camping at the Lucky Star Casino near Concho, OK (see previous post for more info), we decided to drive into the heart of Oklahoma City and visit the National Cowboy and Western Heritage Museum.

The only regret we had was that we needed more time to explore the museum and all it had to offer.  We arrived shortly after opening at 10:00 AM and had to be “ushered along” when the museum was ready to close at 5:00 PM. 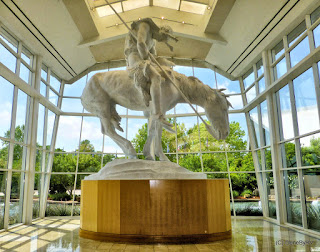 The entrance lobby features a version of the statue created by James Earl Fraser entitled “End of the Trail”.  Much of the museum is dedicated to paintings, photographs, and various works of sculpture.  I will be the first to admit that I am not usually a fan of touring “art galleries”, but the manner in which the artwork was presented and the accompanying narrative near each piece held even my attention.  Actually, I really enjoyed it.

Unfortunately, photography is not allowed in much of the art gallery areas.  The link to the museum at the beginning of this post has photographs of many works on display, however. 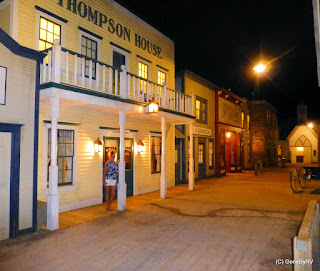 One part of the museum is called Prosperity Junction.  It is an area which attempts to re-create (and does a very nice job, btw) a western cattle town circa 1900 just at dusk. 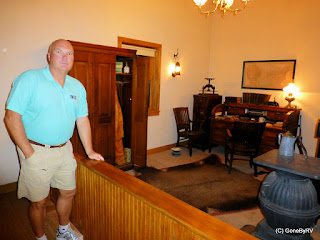 The “town” has a hotel, church, bank, school, marshall’s office, among several other buildings.  Once inside the buildings, artifacts of the era are on display.  Here I am taking a look at the Marshall’s Office of the time period. 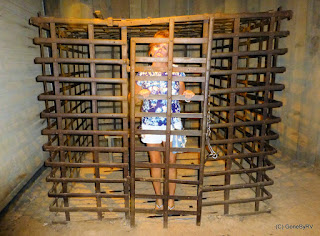 Of course near every Marshall’s Office was the town jail or cellblock.  Karen was able to escape after her short time in jail. 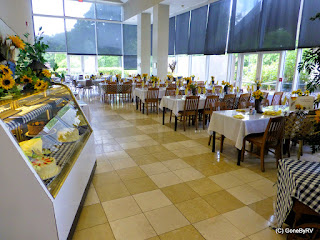 Due to typically excessive costs, we usually avoid eating lunch in museums, but this one was an exception.  Not only was the price very fair, but they even had a lunchtime buffet which allowed us to make our own selections.  Very tasty.  Recommended! 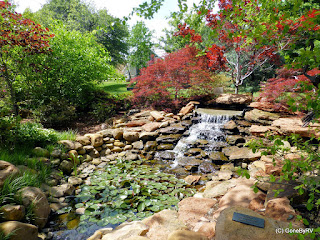 Many of the museum’s exhibits stretched outdoors, as well. Several garden areas contained water features along with sculptures and other pretty landscaping features. 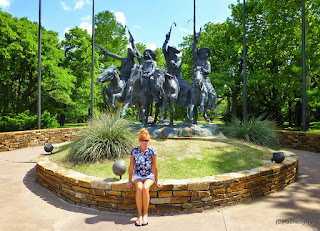 The Western States Plaza area contains flags of all of the “western” states, a large area for events, and a large-scale version of Remington’s “Coming Through the Rye”. 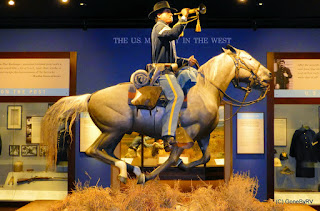 As time was really moving along for us, we made an all too hasty visit to several halls.  One entire area was devoted to the role of the military in the west.  Many, many artifacts here.  For fans of military weaponry, uniforms, and other history of this era, one could spend an hour or so in here alone. 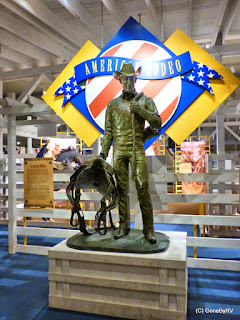 Of course, the role of the cowboy in the west and the evolution of the rodeo are displayed in depth.  The rodeo champions thru the years, along with many of their trophies and memorabilia, are presented extremely well. 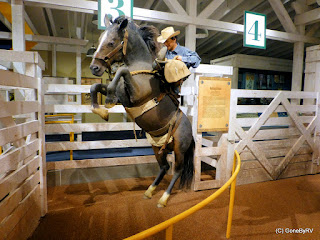 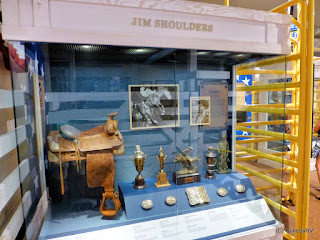 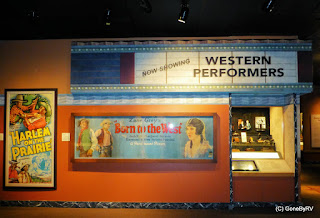 The last section of the museum which I really wanted more time in was dedicated to the role of the film industry in the western culture.  This area was called the Western Performers Gallery.  A short film on the evolution of the film industry as it dealt with the West was very interesting beginning in the day of silent films and continuing to recent day. 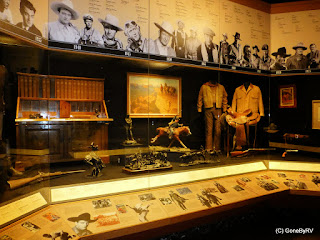 There are “tribute” areas to several of the main actors throughout the years, and of course, John Wayne was well represented.

I have many other photos of our visit to the museum in my Google+ album.  Please take a look.

We enjoy museums and this one truly contained a great collection of, and display of, all items West. Certainly worth a visit if you are ever in the area.

Thanks for stopping by to take a look!
Posted by Steve and Karen at 8:32 PM