Posted from Las Vegas TT    (Click on Pics to Enlarge)

Last Wednesday marked our last day for the winter stay in Palm Creek Golf and RV, Casa Grande, AZ.   I will say that we had a wonderful time this past winter season and will be returning again next October for the coming winter season.

With that said, it does feel good to be on the move again.  We're heading to the TT at Las Vegas, NV for a couple of weeks.  We've visited Las Vegas on several prior occasions, but never in an RV.  Casa Grande, AZ to Las Vegas, NV is about a 5-hour drive by car, but hey, we're fulltimers and we don't do a lot of things quickly anymore. 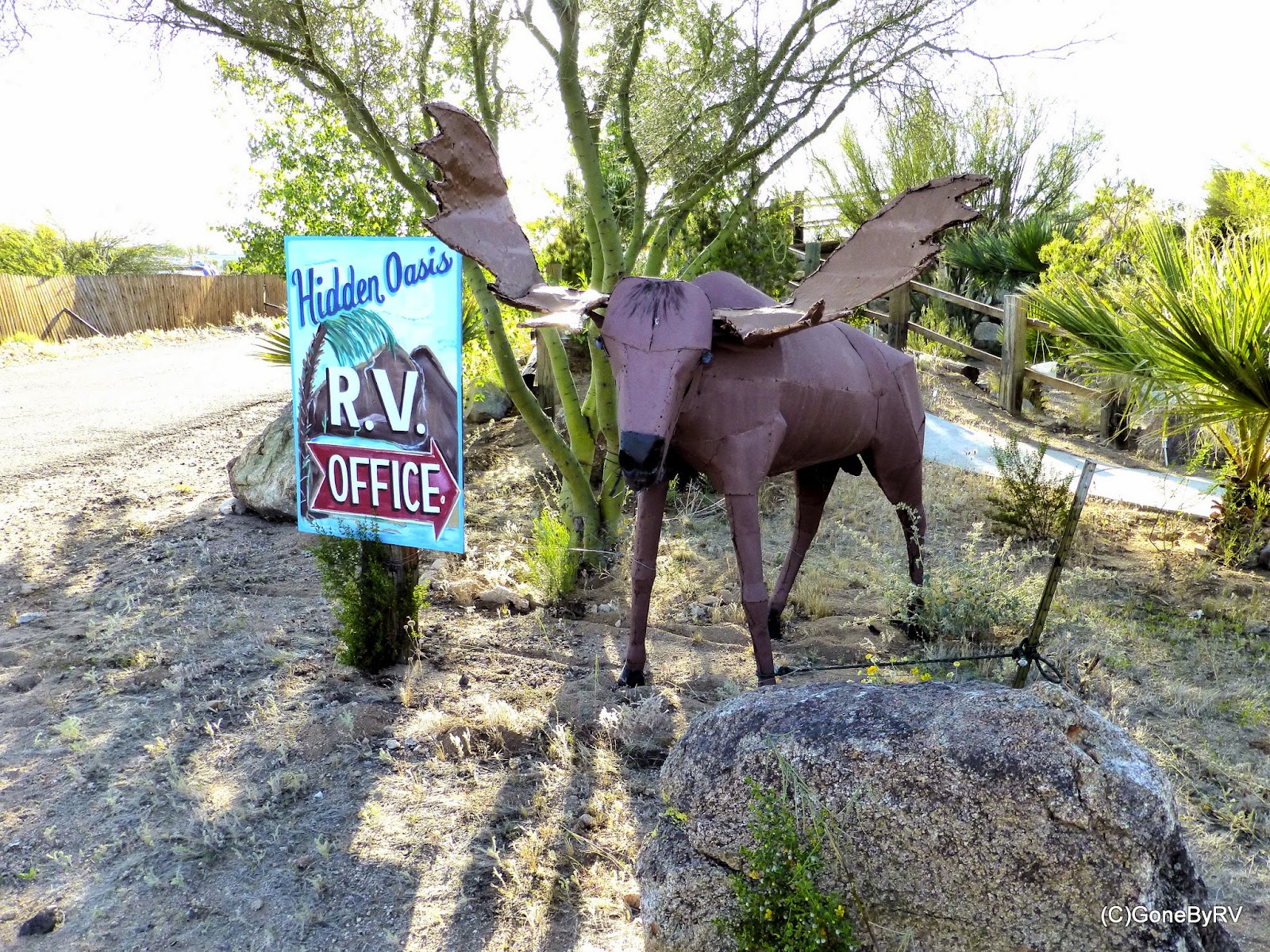 We decided to split the trip into two short days and overnighted in the little town of Wikieup, AZ. There are two CGs in town and I think both are about equal in amenities. Of course, we chose the more expensive one ($20 for FHUs),  but the other CG would have sufficed.  We spent the night at Hidden Oasis RV Park.  The sign by the office speaks volumes about the place. 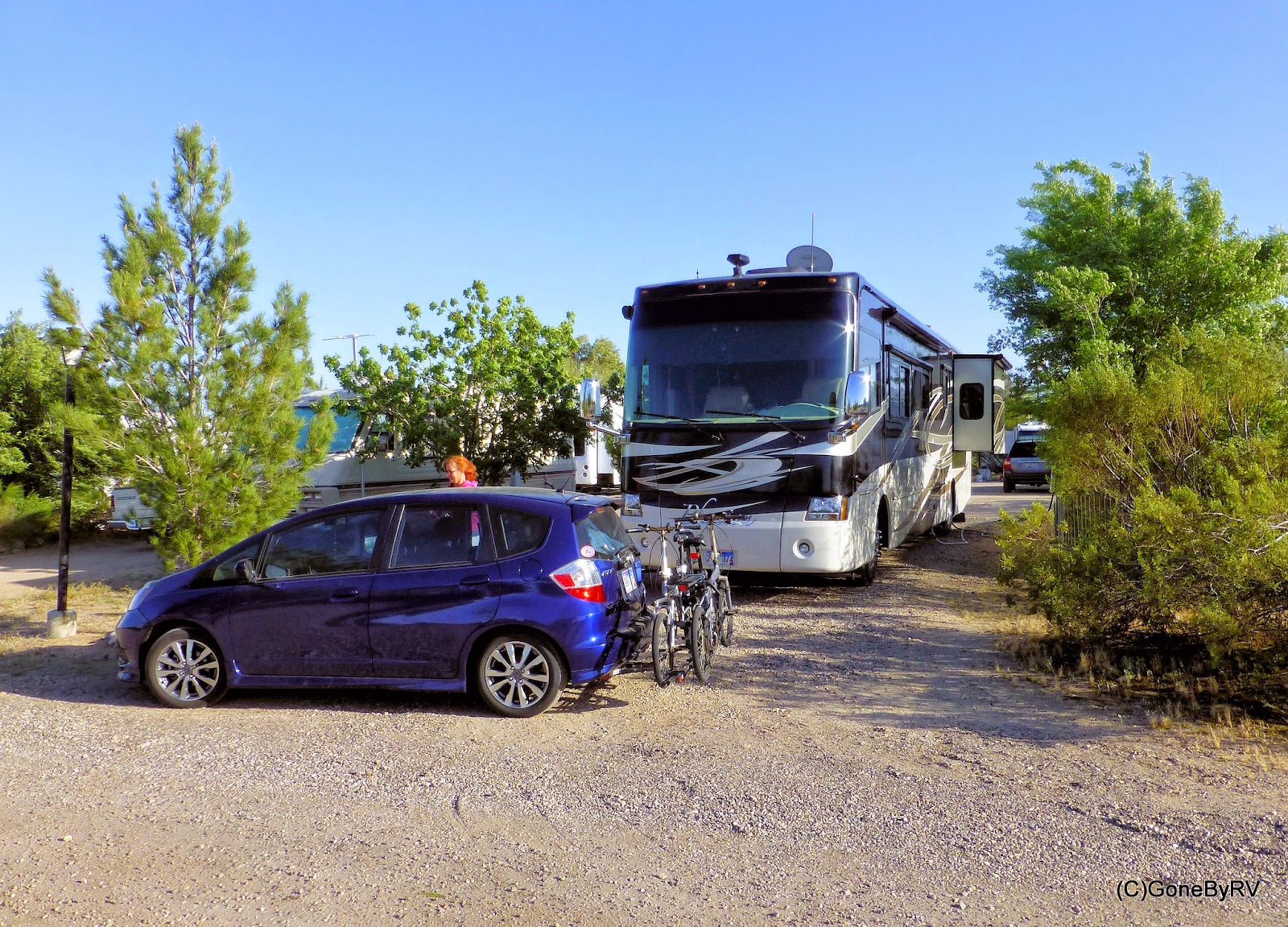 I guess we were lucky, however, to get a spot.  We arrived about 2 PM and got the last site available.  It worked out fine for us as we weren't here to see the sights(?) of Wikieup anyway.

We pulled into the TT Las Vegas just after noon on Thursday.  The place is still fairly busy, but we are parked near the rear of the park and have FHUs with 50-amp electrical service.  ($5 surcharge/night for the 50-amp service.) We've never been to this TT's park before, but aesthetically it certainly isn't one of my favorites. Close quarters in a gravel parking lot setting.  Enough said.  We're not in Las Vegas to "do" the Strip as we've knocked out that area in past visits.  We'll be looking for more adventures outside of the bright lights, casinos, and high-priced shows.  In all honesty, we have to watch our finances more than we did in the past when we traveled here for "mini vacations". 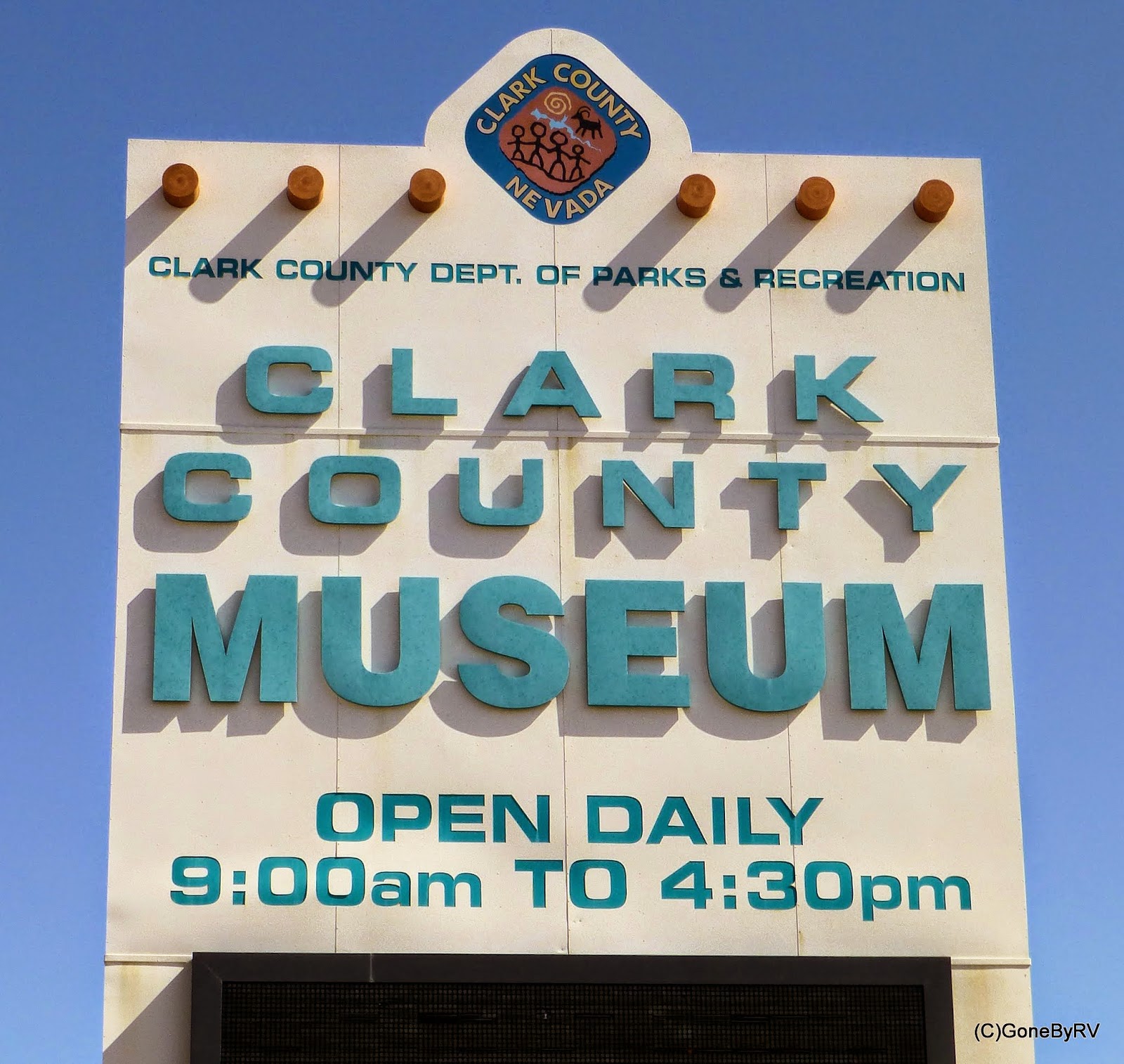 If anyone out there is familiar with the History Channel's Pawn Stars show, then you've heard reference made to the "beard of knowledge", also known as Mark Hall-Patton, the administrator of the Clark County Heritage Museum.  Mr. Hall-Patton appears on the show to give his opinion as to the authenticity of many of the items brought into the pawn shop.  We decided to look up the Clark County Heritage Museum as a place to visit.

This was a terrific find!  Admission is $2 or $1 for folks over 50.  I doubt that there is a better value in Las Vegas.  Actually, the museum is in Henderson, NV just off of Boulder Highway approximately 20 minutes south of our CG. 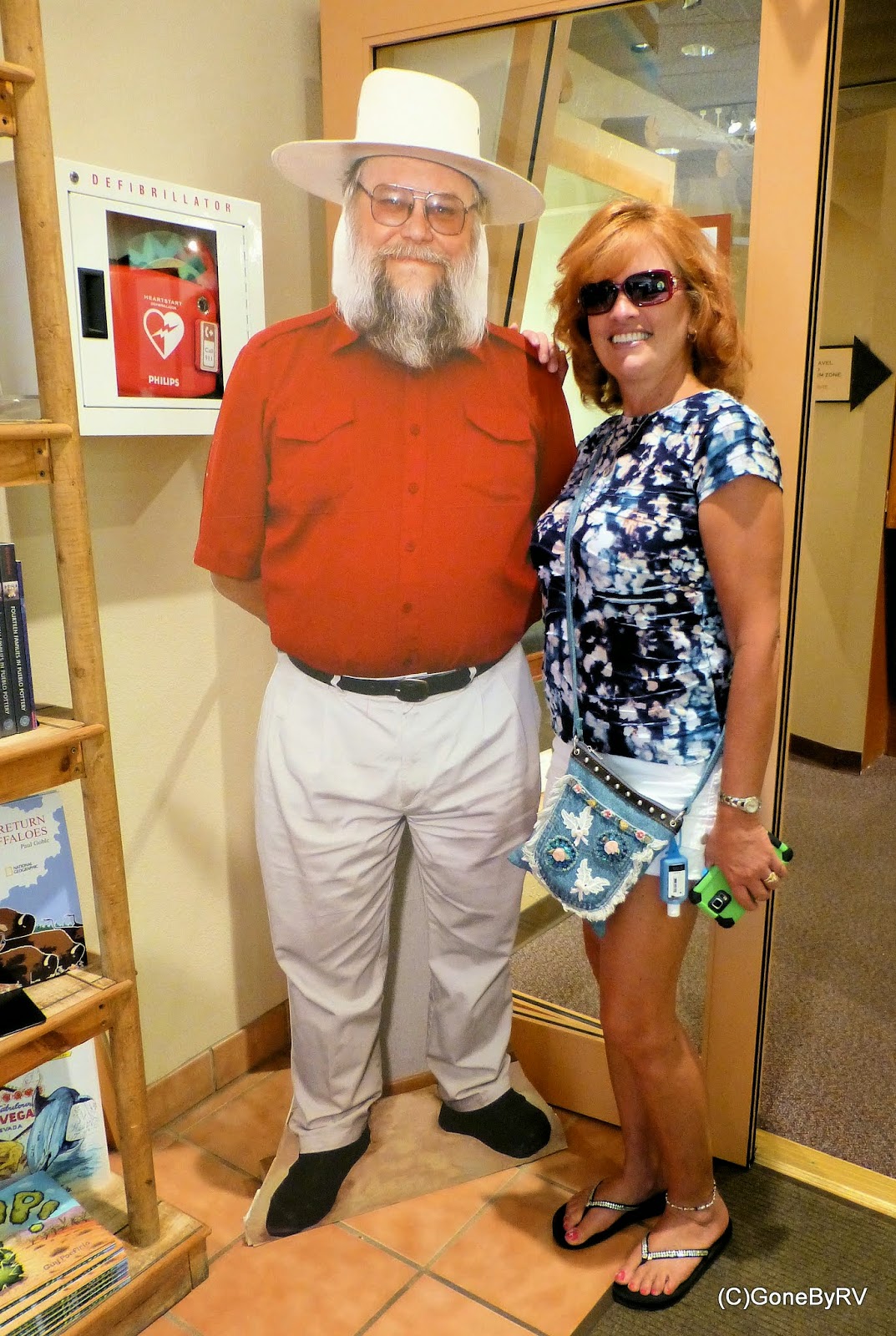 The museum is an eclectic mix of artifacts and complete buildings generally from the southern Nevada area.  The inside exhibits focus on the pre-historic period all the way up to modern day times. Here is Karen "posing" with the "beard of knowledge" himself (or just a cheesy cardboard cut-out of him).

Note:  To see MANY more pictures from the Clark County Museum, along with additional "data signs" about the exhibits please take a look at my Google+ Album at this link. 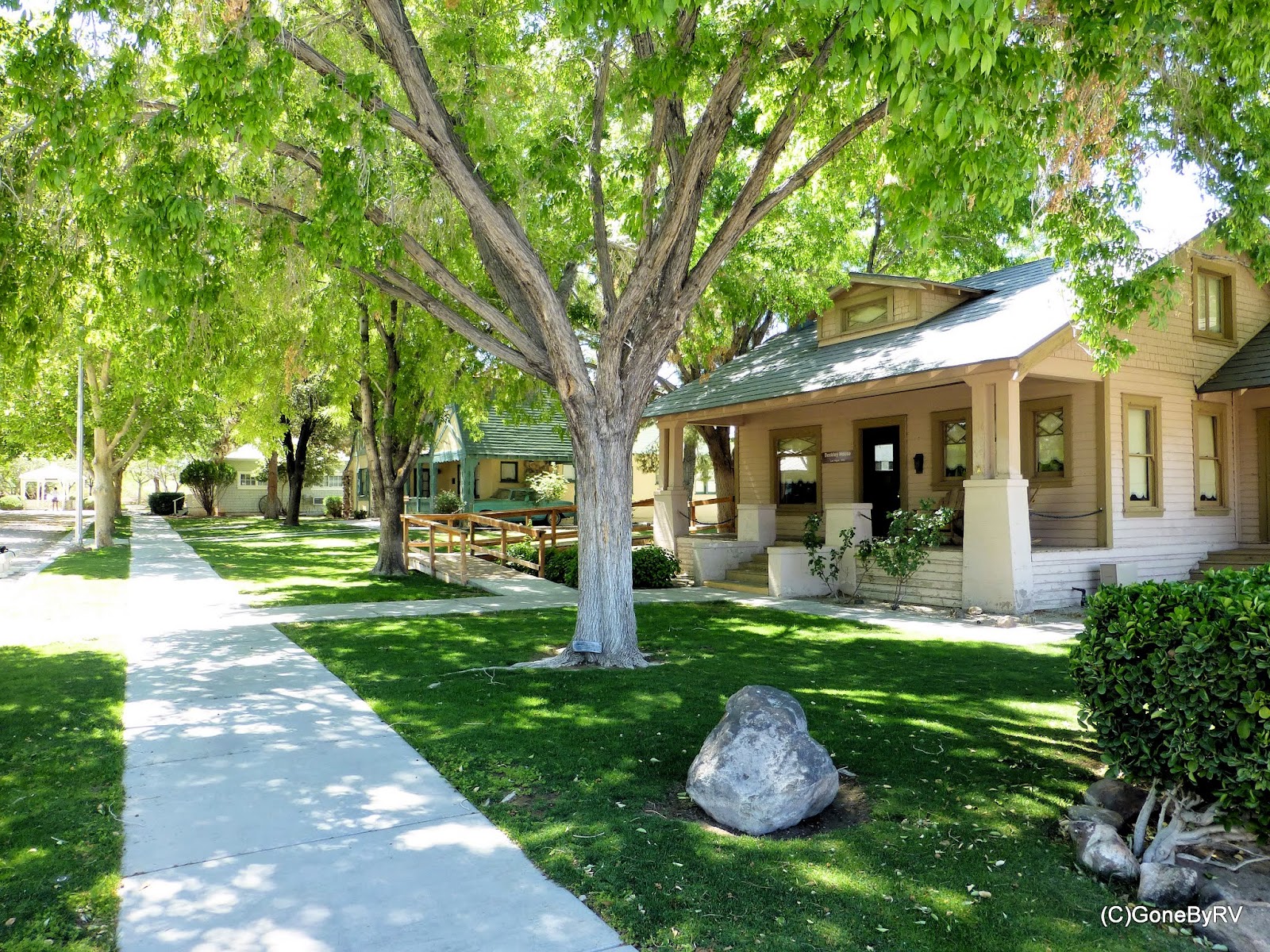 The outside exhibits show such items as mining equipment, a "ghost town" of re-assembled buildings, several railroad engines, cars, and the like, but the area I enjoyed most was called Heritage Street. This street was an assemblage of shops and houses dating from the late 1890s to the 1950s.  All of the structures are real and were moved at various points in time to their present location on Heritage Street.  The interiors are decorated with period furnishings.

Remember to look at my Google+ link above for many more pictures, but I'll include a few in this blog to whet your appetite.  The Beckley House dates from the 1920's era.  I've included a "data sheet" following each picture to give you a lot more information on that particular house.  Also, the Google+ link shows interiors of many of these homes. 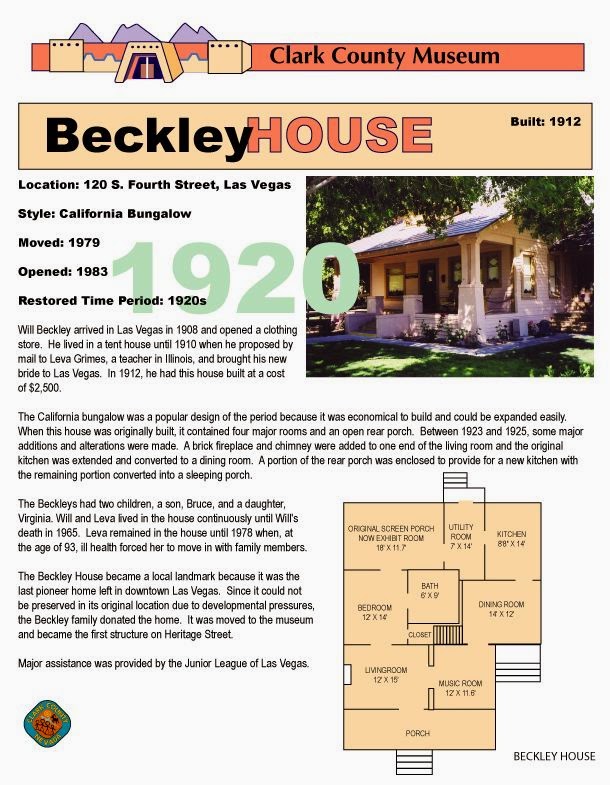 An exhibit which I found interesting was entitled Mobile America. It showed an example of an early motor lodge cabin from the 1930s alongside a 1948 Spartan trailer.  This reminded of the Lucille Ball movie The Long, Long Trailer. 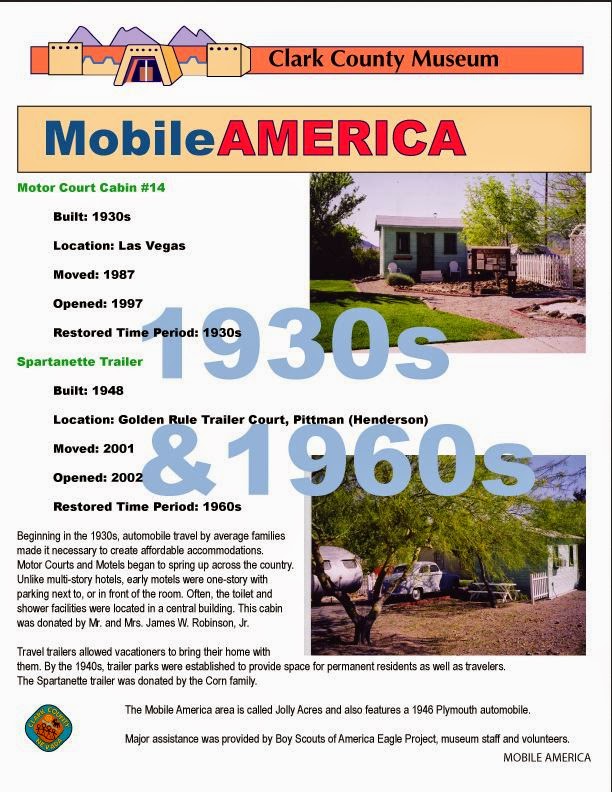 For train lovers, the 1931 Boulder City Depot is on display.  The inside is open to explore, along with a caboose and train car on the tracks outside. 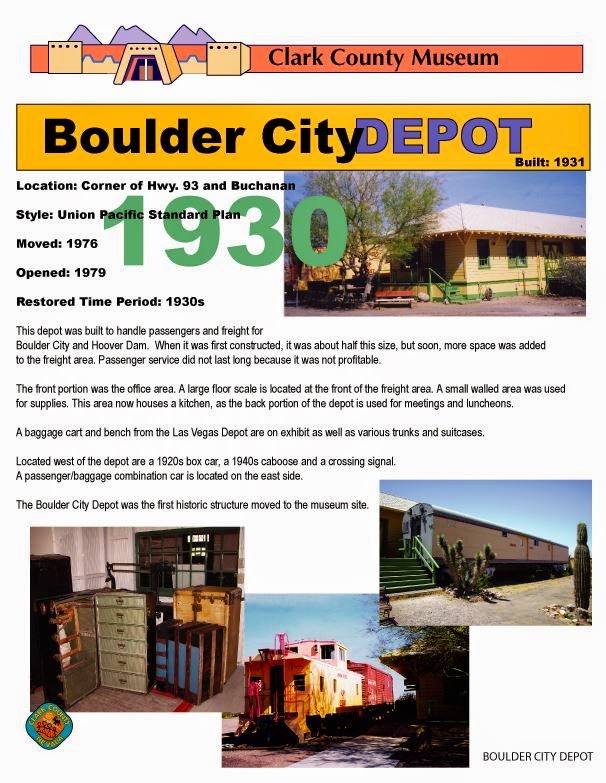 A vast collection of mining equipment is also on display outside.  This 1917 Holt Caterpillar appears to have seen better days.  The before mentioned "Ghost Town" is also located along the short trail near the mining equipment. 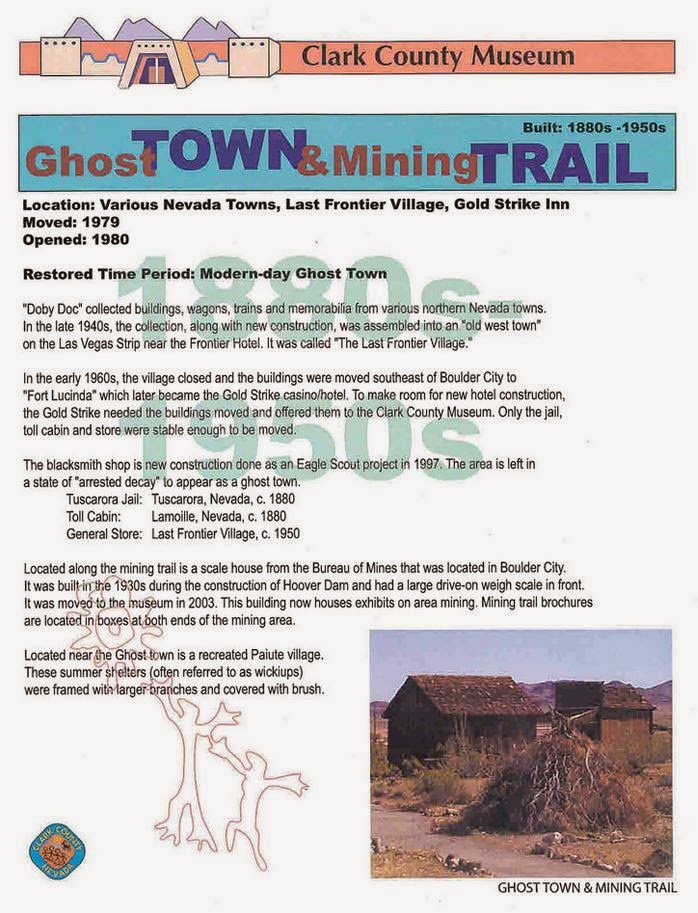 And last, but certainly not least, is the Candlelight Wedding Chapel.  Las Vegas is known for its many wedding chapels and quicky marriages.  This chapel opened in 1966 next to the Riviera Hotel.  It operated until 2003 when it closed.  The entire building was moved in 2007 to the Clark County Heritage Museum site and was opened again in 2009. 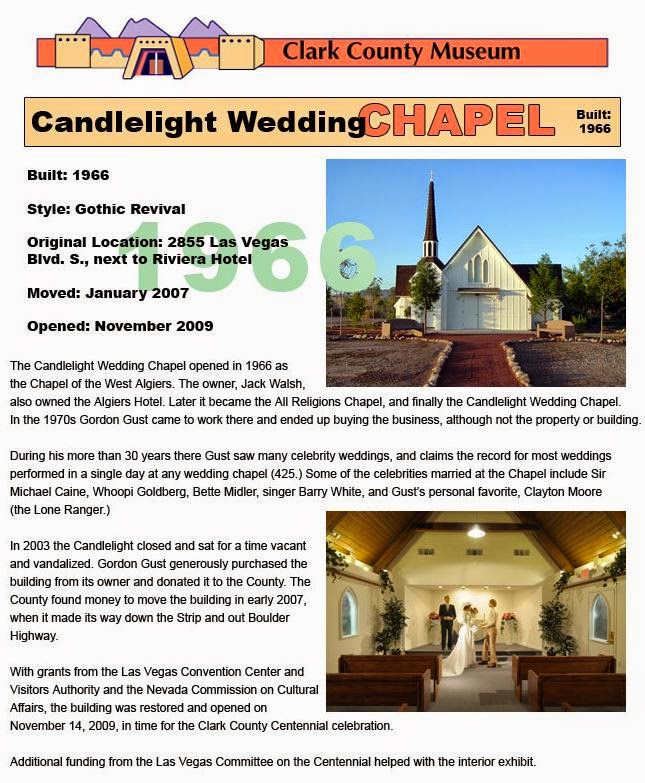 Hopefully, the few exhibits I chose to depict in this blog will whet your appetite and make you want to see more.  If so, please take a gander at my Google+ link. More importantly, if you ever get a chance to visit the Clark County Heritage Museum in person, I think you'll agree that it's the best $1.00 you ever spent.