Garden of the Gods and the US Air Force Academy

I'm a bit behind in posting, but as I look back we were pretty busy during the month of August.  We pulled in to Cheyenne Mountain State Park near Fountain, CO and spent four nights. This was a well thought out and designed park from an RVer's standpoint.  Nice roads and easy to get into and out of spots. We stayed in a FHU site, but I believe they also have partial hookups, as well as, tenting sites. One of the minor "irks" I have against CO state parks is that they charge a daily entrance fee for your vehicle being towed. Why not just add the cost into the nightly camping rate and be done with it? 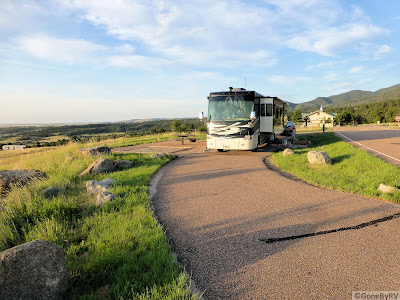 We selected a pull thru site which was terraced  on the mountain side and allowed for nice views of Colorado Springs below. 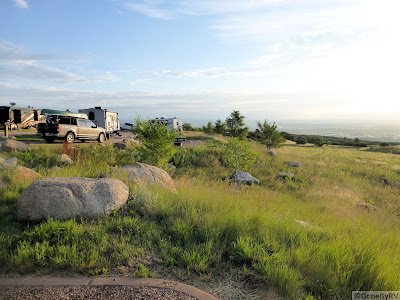 Although trees (and thus shade) in this section is non-existent, the temps were cool enough, and the wind was enough, that we only ran the A/C units for part of the day, and almost never at night.  The patio side of the rig had nice views looking towards Colorado Springs. 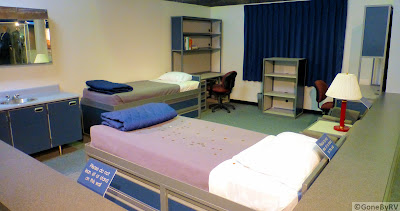 We had stayed in the area back in the mid-90s when passing thru with our 5th wheel, but had not returned since. We took one day and visited the United States Air Force Academy up in Colorado Springs.  Since there are no organized tours offered (unless you're a candidate I'm told), we began our exploration at the Visitor's Center. They show a nice video explaining the Service Academy's role in our country's overall defense and there are many items to view.  One such display is that of a typical cadet's dorm room. Very organized and tidy! 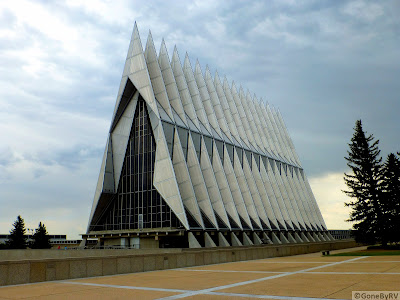 One of the most iconic structures at the USAFA is the Cadet Chapel. It was completed in 1962 and is very "modern" in style. 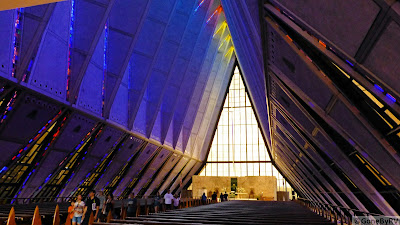 The structure is comprised of two levels, with Protestant assemblies on the main level. This area seats approximately 1200 persons. 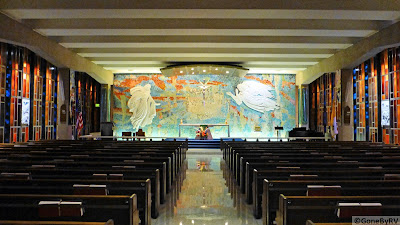 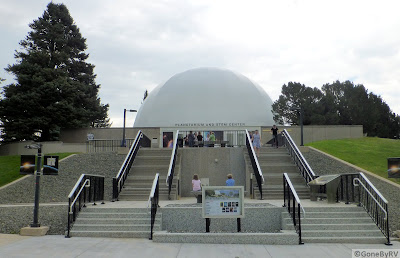 An area which we visited (purely by accident) was the recently re-opened Planetarium. Different films are presented daily in an IMAX format. Well worth a visit if you are lucky enough to attend.  Seating is limited, with no advanced reservations taken. 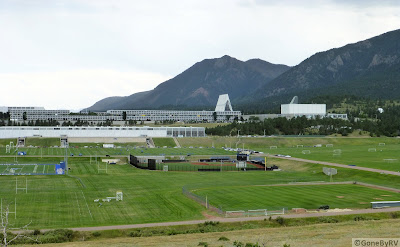 Visitors are not permitted to "roam freely" in the cadets' living or classroom areas, but there are many viewpoints around the campus which afford nice photo opportunities. 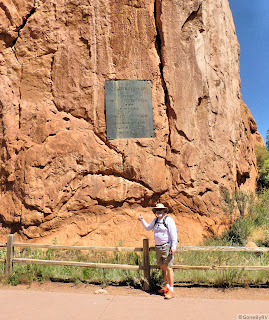 On another day we visited the Garden of the Gods Nature Center. This park is located on the west side of Colorado Springs, not too far from Manitou Springs. At this plaque attests, the area contained within the park was given to Colorado Springs back in 1909 by the children of Charles Perkins. It was his desire that the park would always be free to visit by the public. 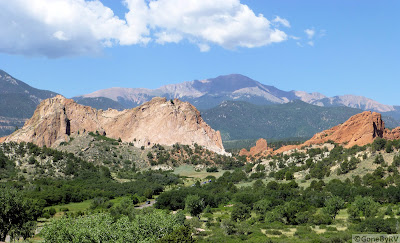 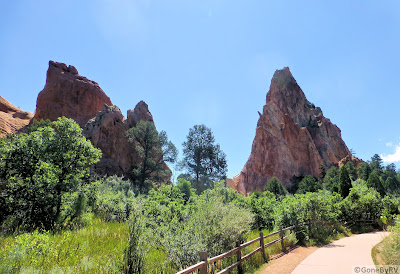 There are several relatively easy hiking trails to explore the park. On this particular day, it was pretty hot so we just hiked a couple of trails.

It you have the time, Garden of the Gods is well worth a visit. Well, after a day spent resting up and "re-provisioning" we head further west thru Colorado. Come join us on our next blog post.

As always, thanks for taking a look!
Posted by Steve and Karen at 6:31 PM

Email ThisBlogThis!Share to TwitterShare to FacebookShare to Pinterest
Labels: Garden of the Gods, US Air Force Academy