From Kentucky we traveled a bit west to visit St. Louis, MO. We had wanted to stay a bit closer to the city, but many of the nicer campgrounds are located on the western side of St. Louis, but many were along waterways which had sustained heavy flooding a few months ago.  As a result, our  campground of choice was still awaiting re-opening, or we were too late in attempting to make a reservation at some of the other campgrounds.

It was back to the state parks again.  We stayed for a week at Cuivre River State Park with FHUs. The park is very popular on weekends, but clears out nicely during the week. There was road construction going on within the park, so we entered from the north side.  Quite an adventure on a narrow road. The entrance to the park on that side was pretty narrow and we barely made it thru the gate without having to unhook the toad. Once settled in, everything went fine. The utilities worked great and the sites were fairly large. 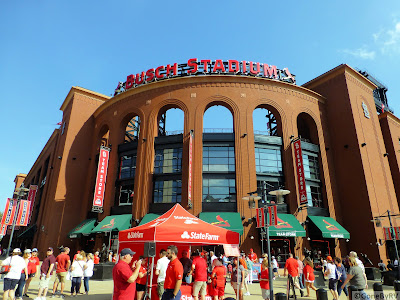 Since we were going to be in the St. Louis area I wanted to try and see a major league baseball game at Busch Stadium, home of the St. Louis Cardinals. This is a very nice stadium right in the heart of the city. 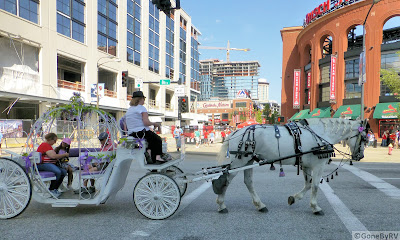 Since I'm not a big fan of driving and trying to find parking for intercity games, we chose to take the metro from the closest point to our campground. The metro stop just east of the airport has free parking and the cost is only $2.50/person to ride each direction. As we approached the stadium, we found that these folks had used an alternative method to come to the game. 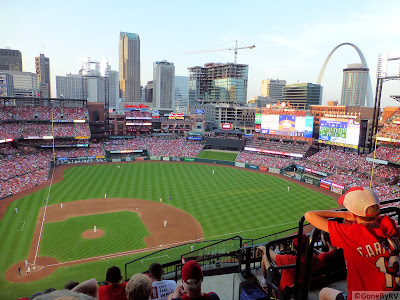 The Cardinals' fans seem to do a nice job of supporting their team. The crowd for the game against the Houston Astros was over 46,000 tonight. 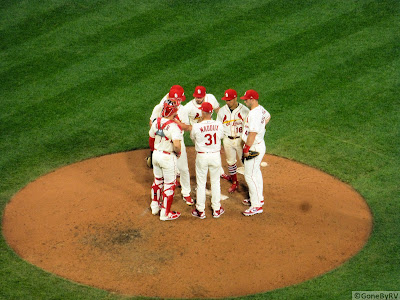 Yes, we had some pretty high seats, but the view of the game and surrounding area was great. You can sense that the game isn't going well for the team when there is a "meeting at the mound" late in the game. 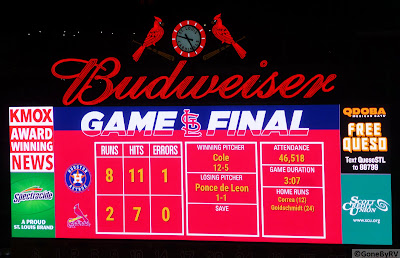 The old Fischer jinx was working again tonight against the home team. The Cardinals wound up losing 8-2 against the Astros tonight, but we enjoyed ourselves at the game.


We had made prior ticket reservations for Monday the 29th to travel back into the city and visit the Gateway Arch and take a guided tour on a riverboat. Of course, Monday is the only day on which it rained during our stay.  We decided to forego the rain and returned on Tuesday. 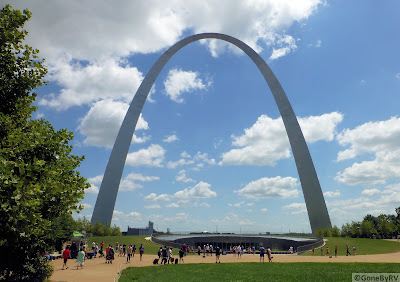 The new visitor's center to Gateway Arch Park was completed in July of 2018. The ticketing center, along with a very nice museum of the area is located at the western entrance to the Gateway Arch. There is also a theater which shows a movie on the construction of the Arch. The movie is a good starting point for understanding the engineering construction marvel of the Gateway Arch. 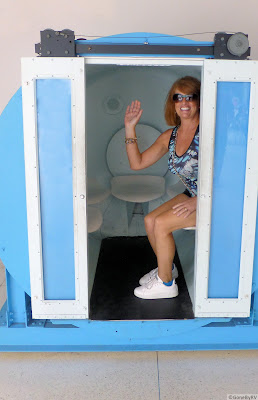 There are unique cars which travel up each leg of the arch. A model is shown in the visitor's center for those who would like to know what they're getting into beforehand. This little pod seats 5 persons. There are no windows except for a vertical piece of glass in the entrance door. Each ride up to the top takes about 4 minutes, and the ride to the bottom about 3 minutes. 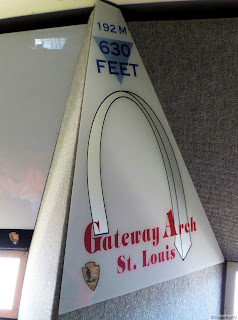 The marker at the very top indicates that you are 630 feet above the ground. 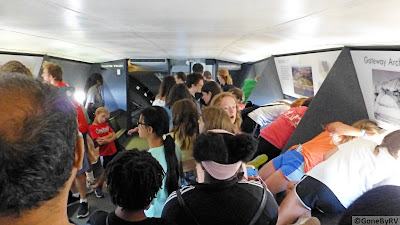 Once at the top, all of the cars from both legs empty and you are free to stay at the top as long as you'd like to take photos out of small windows on the eastern and western side of the arch. 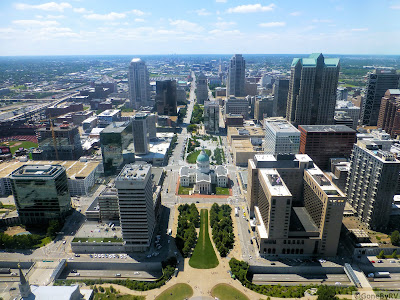 Here's a view looking west toward St. Louis. The white building in the center of the photo is the Old Courthouse where the famous Dred Scott case was initiated. 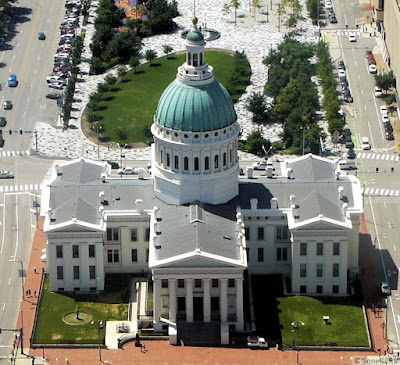 Here's a bit closer look at the Old Courthouse.  This building is part of the Gateway Arch Park and is free is visit.

This is the view, looking back to the east, of the Mississippi River and into Illinois.


The weather today was excellent. For folks who don't like to drive and attempt to find a parking spot in large cities, public transportation systems are the way to go. We again were able to exit the metro just a few blocks from the Old Courthouse and Gateway Arch Park. We had a very nice visit to the "jumping off point to the West".

As always, thanks for stopping by to take a look!
Posted by Steve and Karen at 7:11 PM