Crossing the Cascade Mountains and Landing in Concrete, WA

After leaving Twisp, WA (on the east side of the mountains) we were very much looking forward to our next stop in Concrete, WA (which is on the western side of the Cascade Mountain Range). 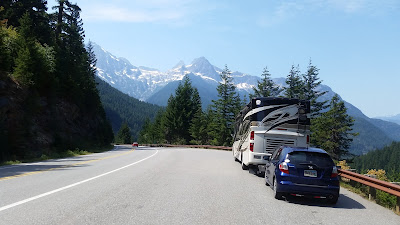 The move was only 117 miles, but it took a bit over 2:46 because of the twisty roads and occasional pull outs for pictures. 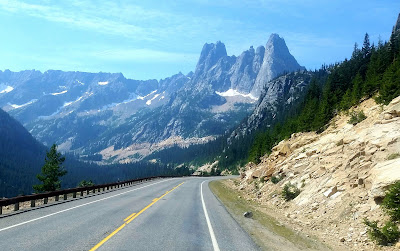 The North Cascades Highway (Rt. 20) is closed from mid-November to April because of heavy snowfall. The drive was beautiful and there's certainly no reason to be rushing as you travel through this area. 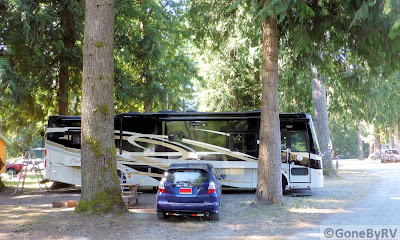 We reached our destination for the next 12 days at the Grandy Creek Thousand Trails, located approximately 6 miles west of Concrete, WA. This is a bit of an odd TT, as it shares the property with the Grandy Creek KOA. 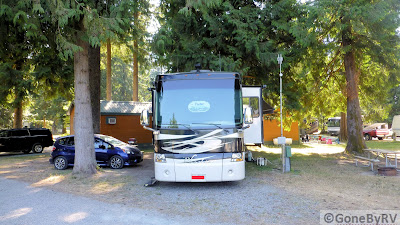 We were able to select a spot under some towering trees. As always when parked under trees, there is an upside and a downside. We loved the cooler temperatures provided by the shade of the trees, but it also meant NO television (either satellite or over-the-air) for the entire stay. Oh well, we survived. LOL 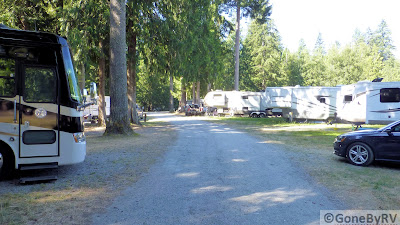 
One of the areas we wanted to visit while here was the Mt. Baker National Recreation Area. From our campground, Mt. Baker is almost due north and only 17 miles away. Unfortunately, that is "as the crow flies". The drive by car was about 85 miles. 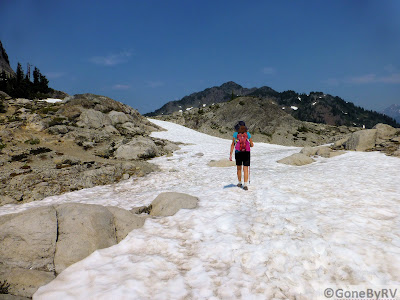 We followed SR542 all of the way to the end of the road (past the Mt. Baker Ski Area). The road ends in a large parking lot which leads to several trailheads for hiking. We began with the longest hike of the day to Table Mountain. Although it was July, the remains of snow and ice are still present. It did make finding the start of the trail a bit more challenging.

Don't let the snow fool you, it reached 90 degrees on this day. This whole area is beautiful. Here's a view of Mt. Shuksan as you look toward the north. 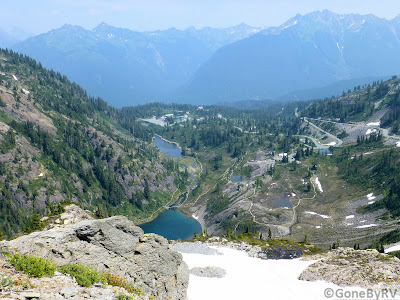 The final 1/4 mile is a bit steep, but the views from the top of Table Mountain are wonderful. We're looking toward Bagley Lakes here. 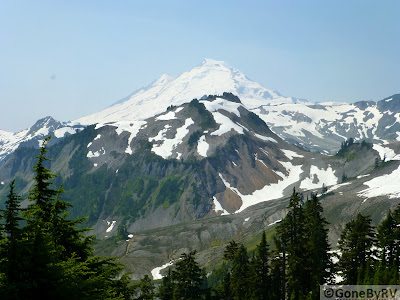 Of course, if you look the other direction, the view of Mt. Baker isn't too bad either. 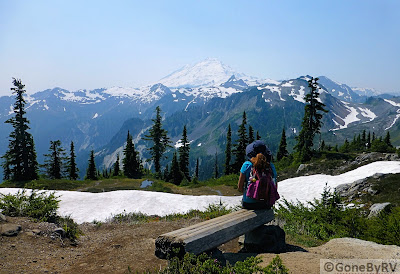 The second trail of the day was named Artist Ridge. I can certainly see how people with artistic talent (certainly not me) would be inspired by the views in all directions from this area. Here's Karen taking a rest for a bit of introspection. 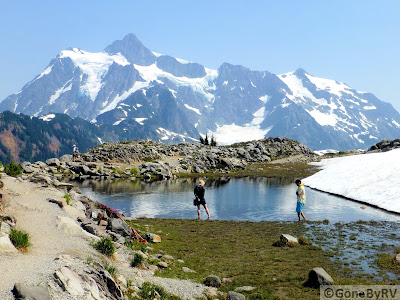 With the snow melting, beautiful small pools are formed at several locations along the trails. 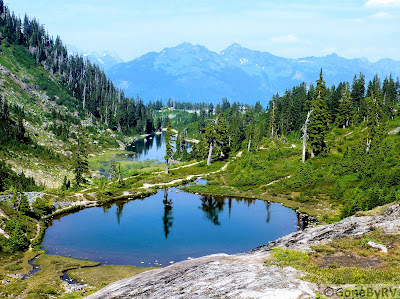 The final two hikes of the day were short in length, but long in beauty. The first, Fire and Ice, was so named because the landscape showed the effects of both glacial and volcanic activity through the years. 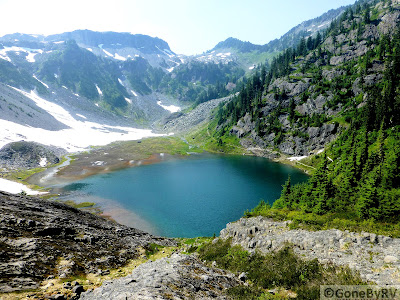 This large lake was nestled at the base of Table Mountain. 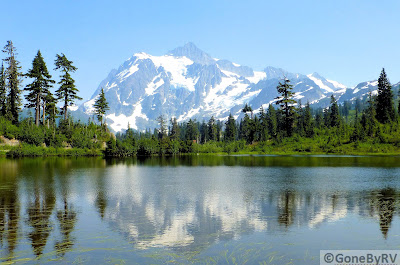 The final hike of the day was named Picture Lake. The trail is comprised of a short walk around the lake. The "money shot" is the reflection of Mt. Shuksan in the lake. Unfortunately, there was a slight wind while we were there and capturing a mirror surface wasn't possible, but I still like the view.

In the next blog post we explore the little town of Concrete, learn about the creation of the dams in this area, and eat a meal of "dam good chicken".