First Camping Experience (Ever) in the State of Washington

Posted from near Twisp, WA

To view additional pics not contained in today's blog, click below:

Although we have camped in most of the lower 48 states, Washington State had been missed up to this point.  Well, up until now. We'll be "somewhere" in Washington State until September 5th. After our detour to Iowa, we got back on track with our 2018 planned stays and pulled into the Thousand Trails Park near Qunicy, WA. It's actually named "Crescent Bar Thousand Trails" because it's located along the Columbia River approximately 7 miles west of Quincy. We entered Washington from Idaho and had been advised that the eastern part of Washington would be hot and somewhat "desert like". To those who passed along this information you were correct. We had several days over 100 degrees, but at least the humidity was low. 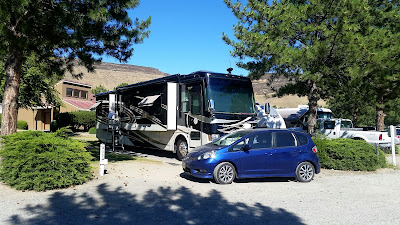 The Thousand Trails campground was actually very nice. We could see the Columbia River from the windshield and we had full hookups with 50-amp service, so running multiple A/C units was not a problem. 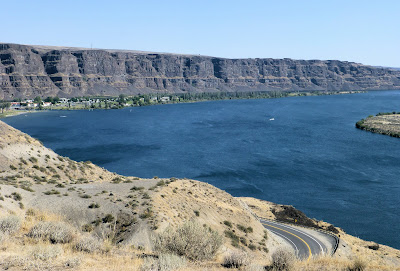 We stayed at TT for 11 nights and used it as a base to explore the area. WA28 is the main road in the area and the campground is approximately 2 miles down the winding road toward the area known as "Crescent Bar". There are a couple of campgrounds, many vacation condos, single-family vacation homes, a marina, golf course, and several commercial stores down on the Bar. In this photo, Crescent Bar is the green area along the east side of the Columbia River. 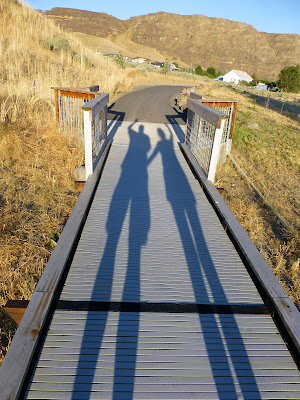 There is a very nice paved biking/walking path which extends all of the way to the end of the peninsula. We were able to get in a walk most evenings. 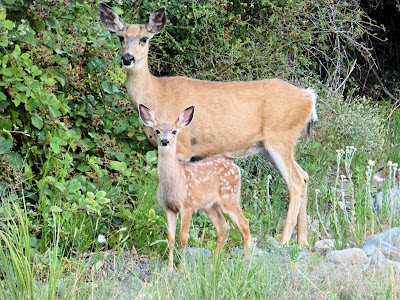 At the far end of the peninsula is a public golf course and we saw several deer each evening during our walks. 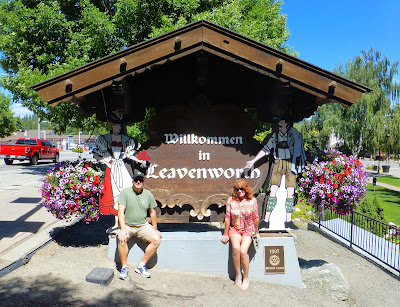 On July 10th we took a trip up to Leavenworth. From the TT, Leavenworth is approximately 1 hour, or 50 miles. The entire town center is modeled after a Bavarian-styled village, including structures and restaurants. The permanent population is around 2000 persons, but the town definitely swells in "tourist" season. It was very crowded and parking is hit-and-miss. 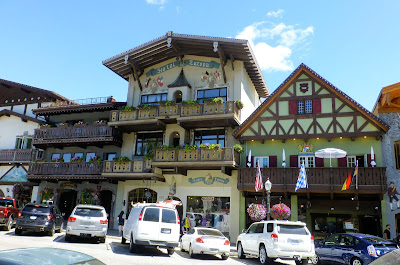 The town was "cute" and Karen certainly enjoyed it, but keep in mind that this town was created to revitalize a dying logging town and has no real roots to people from the Bavarian area in Europe. I will certainly give the creators kudos for bringing the tourists back to this area, however. 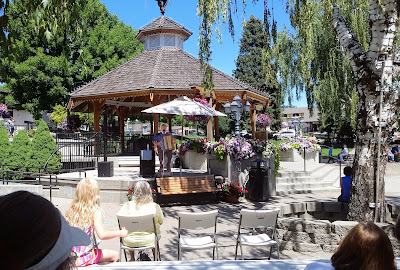 We sat and relaxed for a bit in the Town Gazebo area while listening to a gentleman playing his accordion and singing "Bavarian inspired" songs. 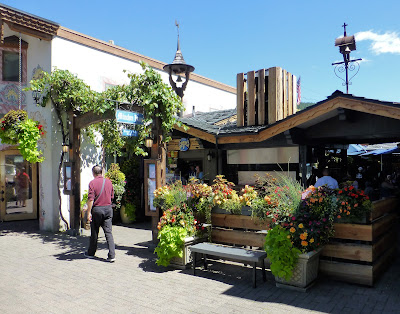 For lunch we ate at the outdoor restaurant Munchen House. The brats were excellent. 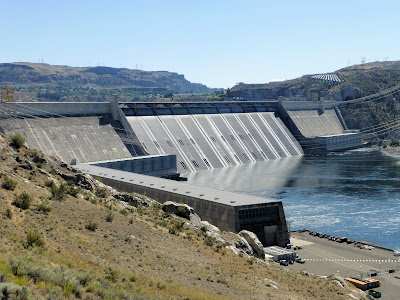 On July 12th we drove about 1 3/4 hours, or 86 miles north to visit the Grand Coulee Dam. We have visited Hoover Dam before, but the power-producing ability of this dam is staggering. 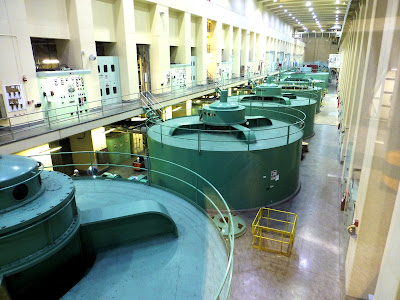 Due to added security measures brought about after September 11, 2001, the tours of the dam are somewhat abbreviated. Everyone must pass thru a metal detector and "empty your pockets" before getting into the dam touring van. This is a look at the pump area along the eastern side of the dam. 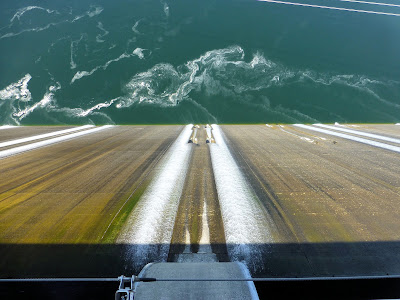 Part of the tour allows the van to drive on the highway which crosses the top of the dam. Normally, all vehicles are restricted from this section of highway. Here we are looking over the railing on the spillway from the dam. 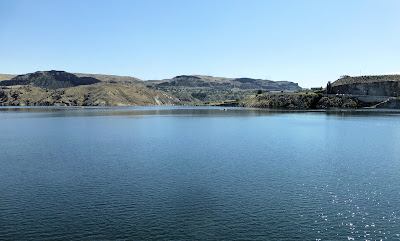 The body of water captured by the dam is named Lake Roosevelt. Quite a beautiful area for water activities. 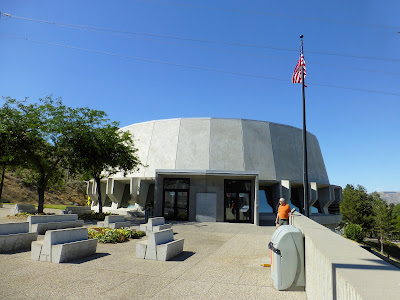 There is a very informative visitor's center on the west side of the dam. A short video does a great job of chronically the design and construction of the dam. There are many artifacts to view as well. 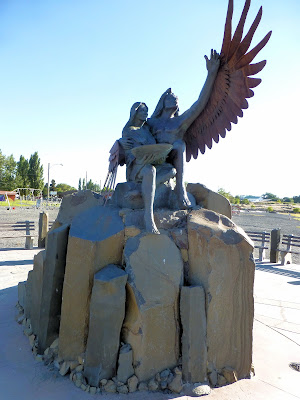 On our way back from the Grand Coulee Dam we took a few moments to see Soap Lake. This is actually a small town, with Soap Lake being the star attraction. The Lake is thought to have healing properties as the mineral content in the water is very high. In 2009, the local garden club dedicated a statue named "Calling the Healing Waters". RoadsideAmerica.com touts it as
"Calling the Healing Waters" features a man with bird wings and a woman with a bowl. Promoted as the "World's First Human Figure Sundial" and the "Largest Human Figure Sundial in Existence." 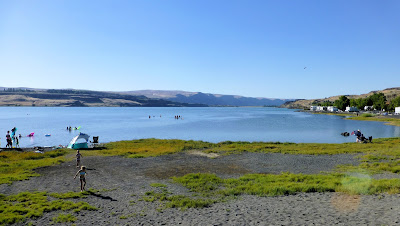 There is a nice public beach where folks can enter the lake. Karen and I both walked in up to our knees and the water is indeed very "slippery". This indicates a very high alkaline level. (A pH of about 10). 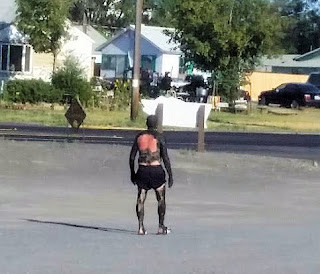 The lake consists of two levels of stratified water. The first 81 feet is mineral water and below is a mud-like layer of stronger mineral compositions and microscopic life forms. The most curious concept, however, is that the layers have not mixed in thousands of years. Here's possibly a "regular" getting his mud fix for the day.


After a few days of relaxing, we'll be heading further north in Washington towards the Cascade Mountains.