If you would like to view additional photos not included in this blog, click on the links below.


Since we visited Zion National Park in 2017, we only went into the park on two occasions this visit. On one trip in we decided to explore two trails listed on the Alltrails.com site.  These trails are not listed on the NPS Zion official site, but were fun nonetheless. 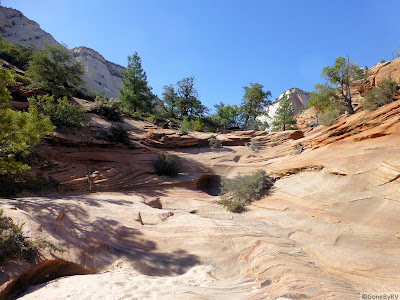 The Many Pools and Clear Creek trails are located on the east side of the tunnel along Rt. 9. Many Pools is described as "Moderate". It was only 2.3 miles in length, but contained a lot of elevation change over slick rock. 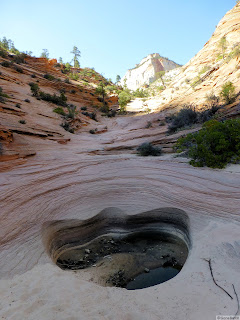 You're basically climbing up the dry creek channel created when the waters carve into the rocks after the winter snows. The trail is so named because there are many pools which are created by the scooping out in the softer rock. This time of the year, however, not many pools can be viewed. 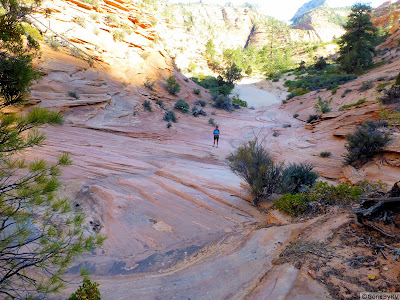 Some nice views of the surrounding mountains from the upper part of the trail. 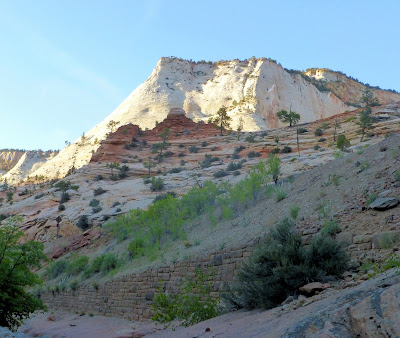 Just down the road was the trailhead for the Clear Creek Trail. This trail is rated as Easy and basically follows the dry creek bed (this time of year). 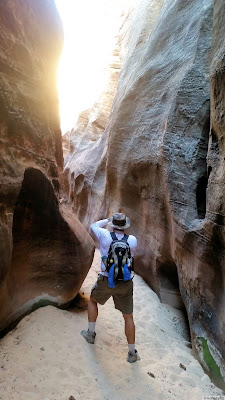 We love slot canyons, and this hike included a short slot canyon.  I guess I love walking between the tall vertical walls on each side. 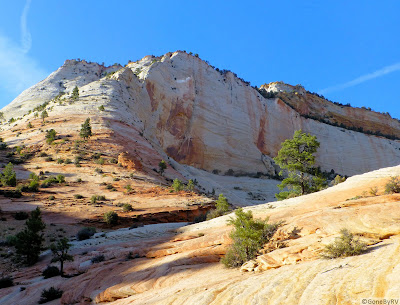 This was an out-and-back trail, so you get to see beautiful surrounding landscapes on each part of your hike.

We returned to Zion NP on a separate day to hike a trail that I wanted to do last year. Probably one of the most hiked trails in Zion NP is named Angel's Landing. This hike is rated as Hard, mainly due to the last 1/2 mile of the trail. The  trail is approximately 5.5 miles if you hike to the very top (which we didn't). 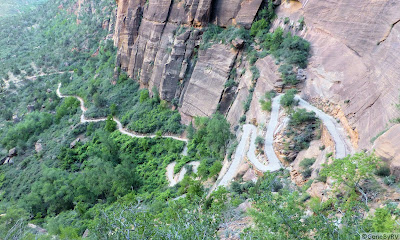 The first 1 1/2 miles is not all that difficult, just a steady climb. The elevation change from the trailhead to the very top of Angel's Landing is about 1400 feet. 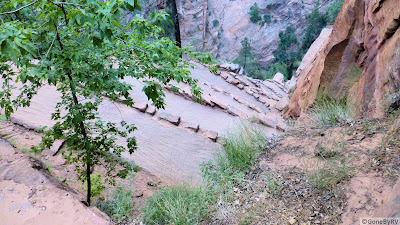 Between 2 and 2 1/2 miles you encounter Walter's Wiggles. This is a switchback portion of the trail constructed by the park's first superintendent Walter Ruesch in 1926. Strangely enough, Mr. Ruesch had no engineering experience. There are approximately 21 levels in the switchbacks. 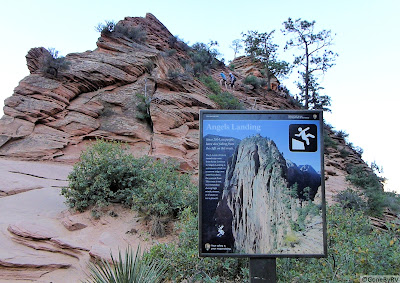 At this point, it's only a short distance to the area known as Scout's Lookout.  This is the point where a decision can be made to hike the final 1/2 mile to the very top of Angel's Landing or not.  We chose not!  (The sign indicates that six people have died falling from the final climb area since 2004.) 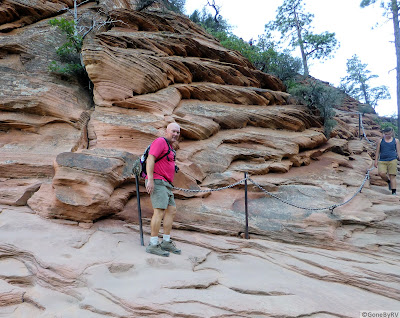 Much of the final section has climbing assistance chains along the trail. This is about as close as I got to making the final ascent. 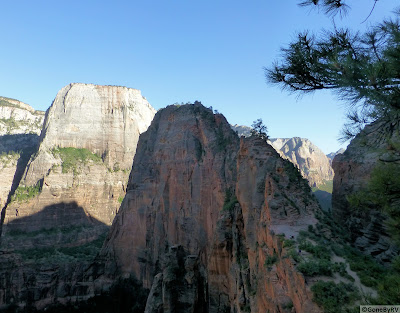 We were able to get a few pictures of the final fin to the top from our nice and secure lunch location on Scout's Lookout. 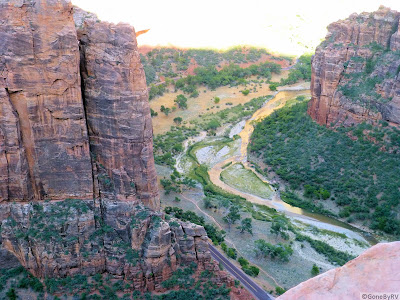 Although the view from the very top must be truly magnificent, the view from a bit lower wasn't too shabby either. That's the Virgin River on the floor of the canyon below. 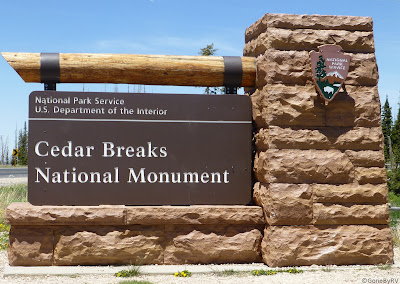 It's now the first week in June and the daily temperatures in the area have been in the mid-90s for a few days.  Time to seek a cooler spot to hike.  A great place to cool off is Cedar Breaks National Monument.  This park is located about 90 minutes north of Hurricane, UT. The nice thing is that the elevation is above 10,000 feet. 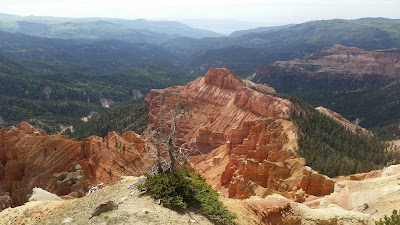 Several folks we spoke to think of Cedar Breaks NM as a mini Bryce Canyon.  I can certainly see why as you're viewing perspective is looking down into the monument as opposed to being at the base of the mountains as in Zion NP. 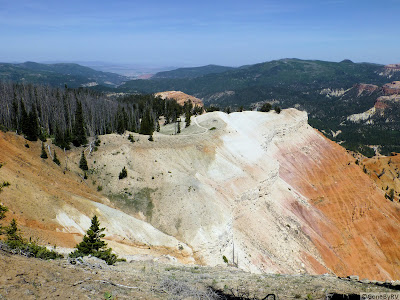 Cedar Breaks NM only has 4 listed trails. We decided to take the Spectra Point/RampartsTrail to view down into the monument. The trail was about 4 miles out-and-back. The hiking wasn't bad, except for the high elevation which we weren't quite acclimated to yet. Spectra Point can be seen toward the upper right portion of this picture. 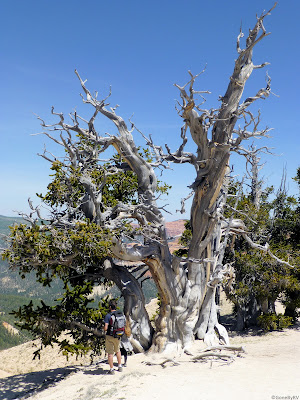 On the way to Spectra Point a sign indicated that Bristlecone Pines are prevalent in this area. They are some of the oldest living trees in the world. The neat thing about them is that although most of a tree might appear dead, part of the tree diverts all of its' resources to a surviving branch or two. Some of the trees in this area are thought to be about 2000 years old. 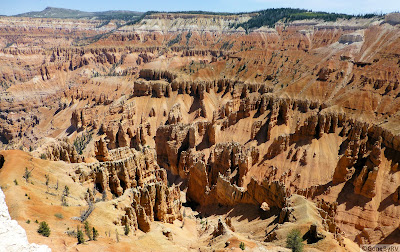 Here's a view from Spectra Point looking into the monument area below. 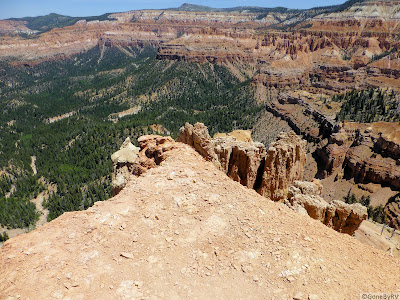 The second half of the hike led us to Rampart Overlook. Most of this hike is spend descending from the Spectra Point area. We passed thru many trees and "green" areas to reach the Rampart Overlook.

This was a very enjoyable hike. While it was in the low 90s back in Hurricane today, the temperatures here were in the low 60s, and windy at times. 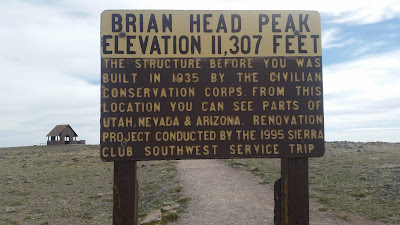 The highest point in the area is named Brian Head Peak.  It's not really a hike, but a gravel road takes you to the summit at 11,307 feet. By the time we reached this point and got out to walk around it was VERY windy.  We didn't spend a lot of time out of the car. 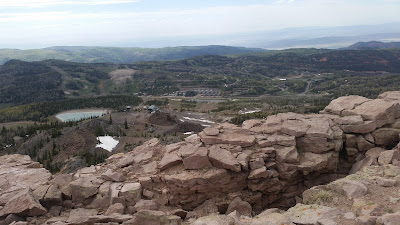 Here's a view from near the CCC-built structure you see in the previous picture looking down onto the town of Brian Head.


This blog will conclude our stay in Hurricane, UT. We move next to Kodachrome Basin State Park, just about 14 miles east of Bryce National Park. We'll be spending 5 nights at that location. 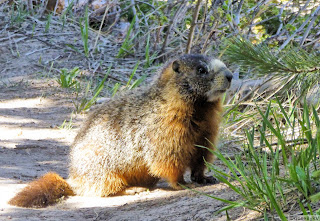