The Last "Fun" Trip Before Our Change In Plans 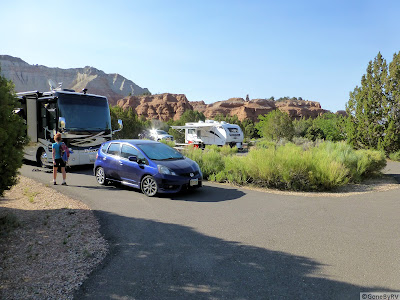 After leaving Hurricane, UT we traveled to Kodachrome Basin State Park for 5 nights. This Utah SP is located about 23 miles east and south of the entrance to Bryce Canyon NP. If you can find Cannonville on the map, then it's about 9 miles south of there.  This stay was way too short and proved to be a great find.  There are two campgrounds in the park. The first named Bryce View is small and has primitive camping sites.  Some can be reserved.  We stayed in the larger campground named Basin Campground. This campground has 13 FHU reserveable sites.  The sites are long and there is plenty of room between each site. 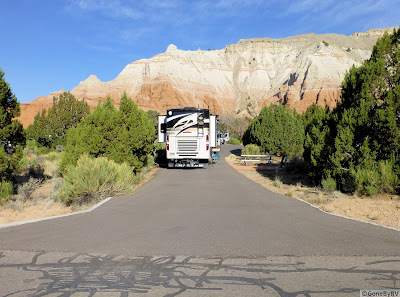 This campground has paved sites. Again, plenty long and the views in all directions are magnificent. 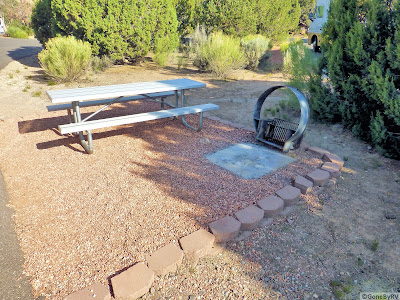 Each site also has a picnic table and grill.  It was evident that one of the camp hosts actually clean the grills out on a regular basis.  Although I didn't get a picture of the bathhouses, these were some of the most modern and clean of any state park we've visited.


We originally had intended to hike some of the trails in the park (there are 5) and head over to Bryce NP. Five nights is not enough time, however, so we saved Bryce NP for another trip and concentrated on the trails inside the park.  (Just an FYI: There is NO cell service inside the park).  This worked out well for us as it was nice to get away from the internet for awhile. 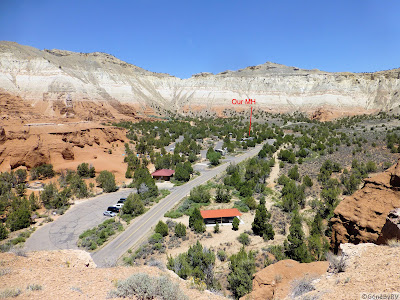 None of the trails are long or that strenuous, so we usually did a couple each day.  The first, Angel's Palace Trail, was just a short jaunt from our rig.  The trail rose in elevation about 200 feet and allowed you to look down on the entire campground.  That's our rig in the distance. 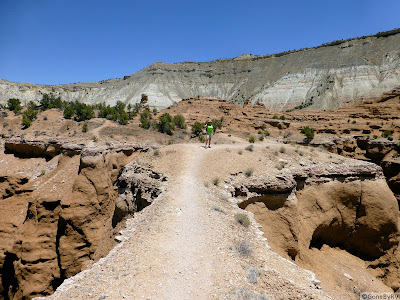 Here's Karen on the end of a formation looking down into the valley.

Nice panoramic viewing was possible from many locations along this trail. 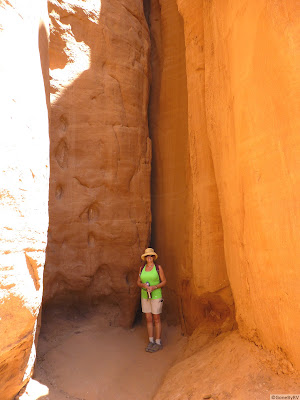 Another trail we hiked on the same day was named Grand Parade Trail. Unlike the previous trail, Grand Parade kept you along the floor of the formations. Two box canyons were the attractions highlighted along this trail. 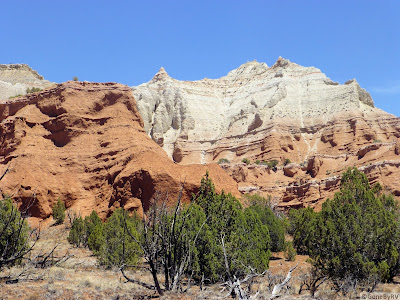 One of the reasons we love visiting parks and attractions in Utah is because of the beautiful multi-colored rocks. A geology student must go crazy here. 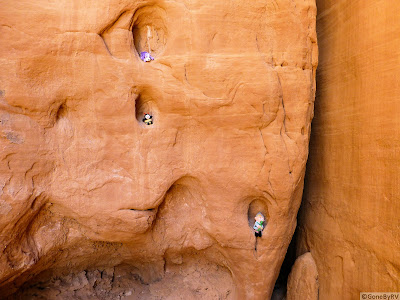 For all of you "Three Amigo" fans of the blog, here's a picture of them goofing off in one of the sandstone formations.

The longest trail we hiked during our stay was named Panorama Trail. You had a choice of either a 3 or 6-mile hike. We took the 3 mile loop, but with the side excursions it wound up being about 4.3 miles total. 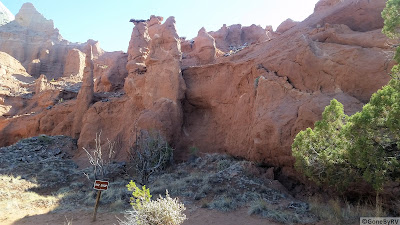 The trail took us beside many rock formations such as "Hat Shop".... 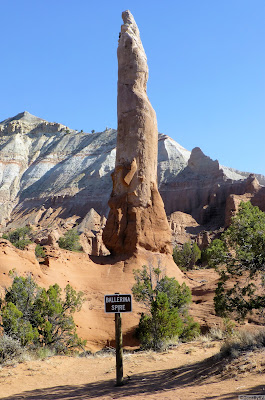 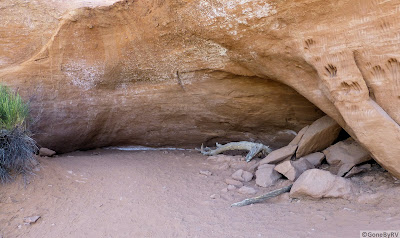 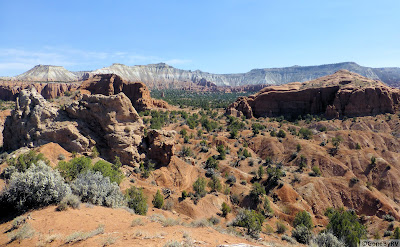 The highlight of the hike, however, was the climb up to Panorama Point to view the formations and mountains in all directions. 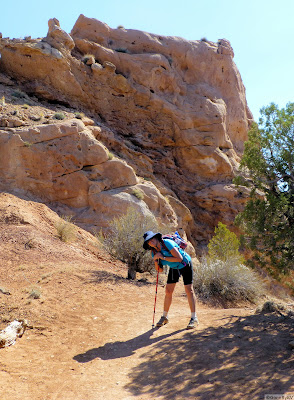 Come on Karen, it wasn't that tough of a climb!  She's just clowning around (I think). 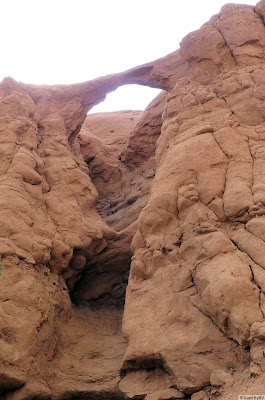 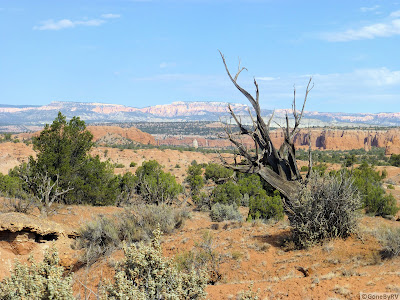 Bryce Canyon NP is in the far distance of this picture. 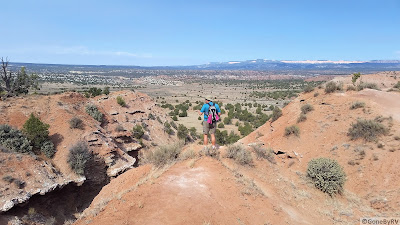 This trail is farther away from the campground, so not as many folks venture out this way.  We were the only two on the entire trail. 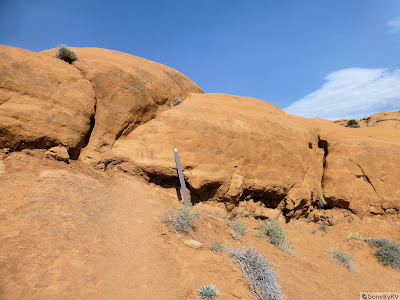 After getting past the farthest point on the trail, there is an option to take the Slickrock Cutoff back to the trailhead. I thought this might be fun until I saw the initial climb to get up there.  (It was much steeper and taller than this photo depicts.) 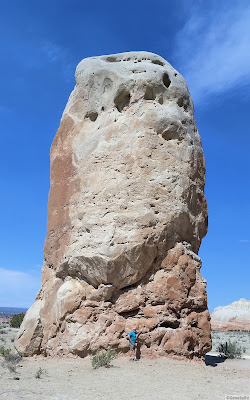 After finishing this trail we drove a short distance to a feature named Chimney Rock.  Very unusual formation standing in the open all by itself.

Had to get a shot of our Honda Fit in a blog. We love this little car, although it's not much for off-roading.

This concludes our time in Kodachrome Basin State Park. If ever in the area, we would highly recommend a visit to this somewhat secluded location. You can really get away from it all!  That's a good thing every now and then!

Stay tuned for our next blog.  A change in our summer plans! (Just a teaser to get you to look).