Wrapping Up Our South Dakota Stay

Posted from Hermosa, SD
(Click on Pics to Enlarge)

To view additional photos, click on the links below:

We always enjoy returning to our "home" state of South Dakota, but this time we came here with a purpose in mind. It's coming up on the time to renew our South Dakota Driver's Licenses (which we had intended to do online), but had not read the regulations as closely as we should have. Even with an online renewal, the applicant must still have a receipt from a campground, hotel, motel, etc. proving at least a stay of one night sometime during the previous 12 months. You can renew an OL anytime within 6 months before your birthday, but that would have meant no sooner than August for Karen, or October for me. We like South Dakota a lot, just not in the cold winter time.

Since we had been forced to alter our original summer plans by diverting to the East Coast we decided to "swing" back thru South Dakota and get the required paperwork for the OL out of the way. 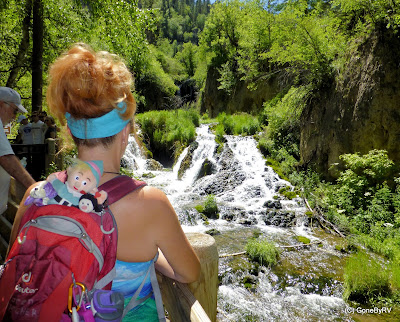 With that taken care of it was time to explore.  We met up with Dave and Diane, fellow FTers and friends from Palm Creek, when they moved over to the park we're staying in near Hermosa, SD. At their suggestion, we took a day trip up to the Spearfish area and hiked a few trails up that way. We hiked the Roughlock Falls Trail. This was a nice easy hike and a place to eat lunch. 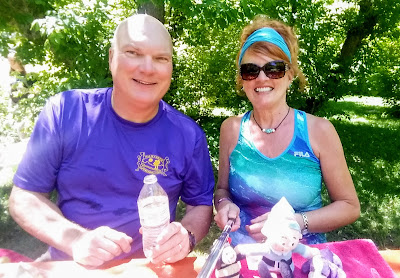 Oh, I forgot to mention that our traveling buddies had lunch there as well. 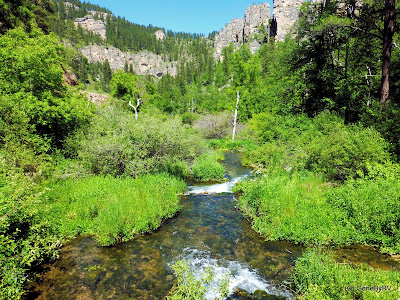 It was a beautiful day for hiking in a very pretty part of the state. 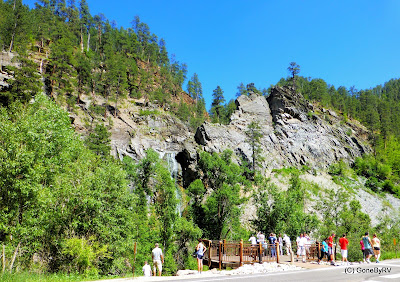 On the road between Roughlock Falls and Spearfish we stopped (along with a bunch of other folks) for a quick look at Bridal Veil Falls. 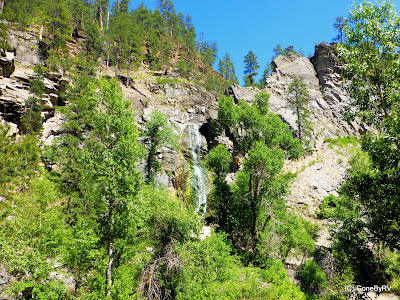 I was expecting a bit more, but the falls were easily visible from the roadway, so this stop didn't take too long. 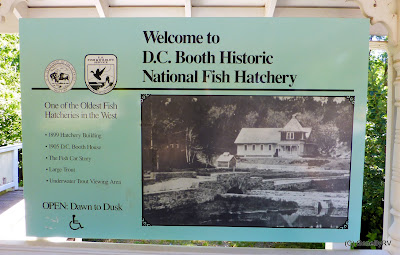 While in Spearfish, we wandered into the D.C. Booth Historic National Fish Hatchery.  There is no entrance fee and was actually very interesting (although I'll admit that I know nothing about fish hatcheries). 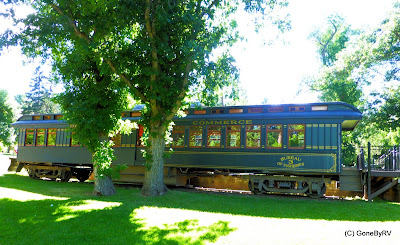 This was a restored fish transporting railroad car.  Beautifully done woodwork inside. 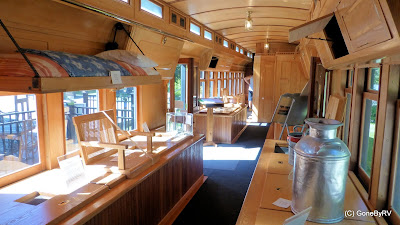 The fish were certainly transported in style back in the day. 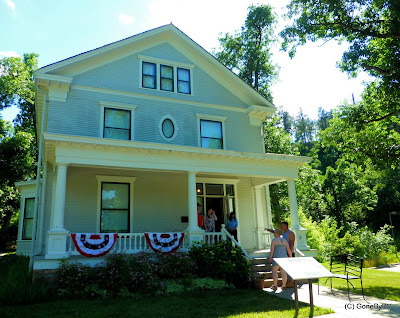 We were given a guided tour of the home of D.C. Booth, the first superintendent of the Hatchery. He and his family occupied the residence from 1905-1933. 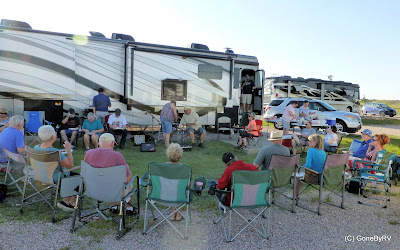 On July 4th we decided to not leave the campground. We believed that this area would be flooded with tourists crowding Custer State Park and the nearby Mount Rushmore areas. It turned out well, as a couple on a nearby site hosted a get together for anyone in the campground who wished to attend. 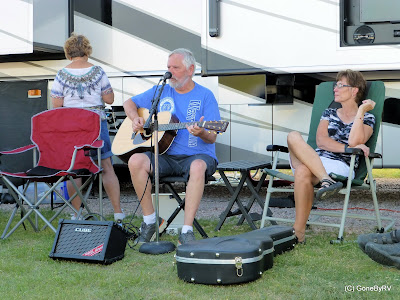 We even had a gentleman provide entertainment on his guitar. 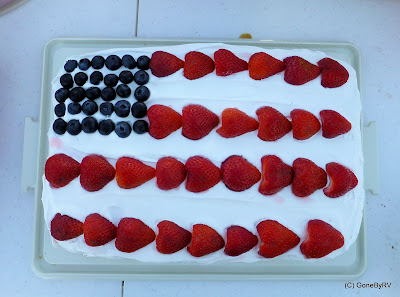 Of course, when RVers get together there's always food. The host made this tasty cake to celebrate the 4th. The vast majority of the folks in attendance were FT RVers.

We love Custer State Park and always make a visit when in the area. We hiked the Cathedral Spires Trail and Little Devil's Tower Trail. I believe that we've now hiked all of the trails in the park. 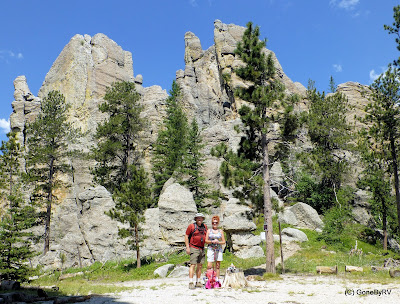 This was at the end of the Cathedral Spires Trail. A nice hike and the temperatures were at least 10 degrees cooler than our campground in Hermosa. 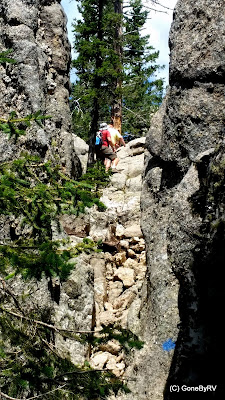 The Little Devil's Tower Trail is relatively easy until the last climb to the top. A bit of rock scrambling is necessary, but still doable.

As with most trails in this area which elevate the hiker, the views from the top are always worth the hikes to get there. 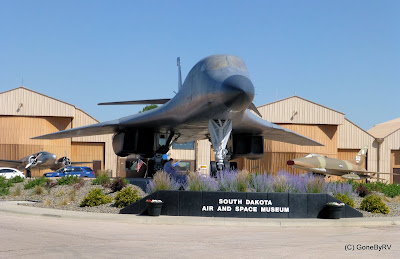 Another great place to visit is the South Dakota Air and Space Museum located just east of Rapid City in Box Elder. The museum is located just outside of the gate to Ellsworth Air Force Base and contains plane exhibits on the outside and a nice collection within.  Again, the museum tour is totally free.

We decided to take an optional bus tour of the Minuteman missile silo located on the base. The tour lasts a bit over an hour and costs $9 per adult. We enjoyed the tour (which winds thru the AF base and takes everyone to a missile silo). The tour guide (retired AF) was very knowledgeable about the base and the history of the ICBM program. 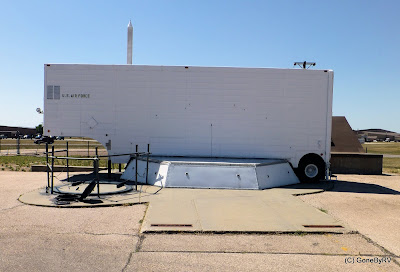 This site was a training launch facility. The difference from this and a regular silo was the entrance. On a "regular" silo, entrance would have been made thru the hatch in front of this vehicle which transported the warhead and the guidance system for that particular missile. 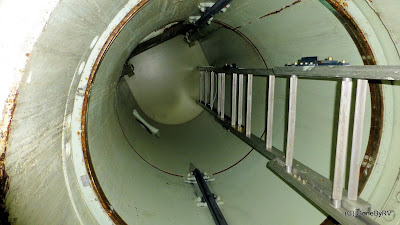 This view is from inside the silo looking back up at the entrance ladder leading to the surface. 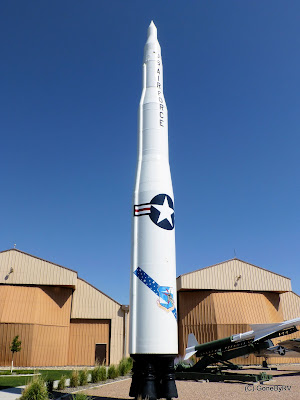 This is a look at the Minuteman II ICBM missile (located at the museum) which was positioned in the silo. 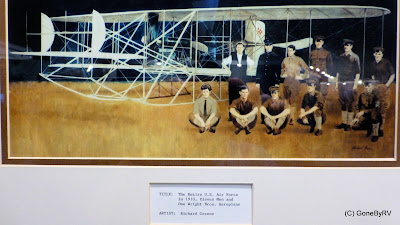 The exhibits inside the museum were very interesting and well presented. Here's a photo of the entire US Air Force in 1910, along with a Wright Brothers airplane.


We'll be packing up and leaving South Dakota on Monday morning. Heading to Colorado, with our first stop for a couple of weeks near Mesa Verde National Park. Hopefully, the higher elevation will also bring cooler temperatures in Colorado. It was 101 degrees in Hermosa, SD today.