A First For Our Motorhome

Posted from near Mancos, CO
(Click on Pics to Enlarge)


We raised the jacks and left Hermosa, SD on Sunday 7/10 with our next destination being near Mancos, CO (just outside of Mesa Verde NP). This was the first time since we've had our motorhome that we've stayed in Colorado.  We've been RVing in one type of rig or another since 1991, but have never stayed in Colorado in the motorhome. Yep, we finally got to "color in" the map over on the right side of our main blog page.

From Hermosa, SD we traveled south on US79, then west on US18 and finally picked up I-25 just south of Douglas, WY. Although a lot of these roads were 2-lane, the drive was easy and traffic light.

Once we jumped onto I-25 the drive was easy until we hit Denver (at rush hour). I had planned a fuel stop in Aurora (really just a big continuation of Denver on the east side), then we headed south again on I-25 until we overnighted in a Walmart in Monument, CO. If you use Walmarts and are in that area, this was a nice one. Plenty of space and lighting at night. We felt safe with no concerns.

The next day we drove south on I-25 again, exited onto US160 at Walsenburg, then stayed on US160 all of the way to Mancos, CO.

This was the motorhome's first "true" test of mountain driving. Just west of Del Norte we had our first glimpse of snow capped mountains ahead.

The snow shed east of the summit at Wolf Creek Pass was at an altitude of 10230 feet.


Although we didn't catch a picture of the area, our GPS read 10870 feet just a short distance west of the snow shed.

The nice thing about the road in this area was that there was a "passing lane" for slower vehicles (like us) both on the way up to the summit and on the side heading down the mountain.  The motorhome did fine as long as you keep the RPMs in the 2000 range on the way up and your foot off the brake on the way down. We have an exhaust brake and it kept us in 2nd gear at a speed of around 30 MPH on the trek down. I rarely ever touched the foot brake. 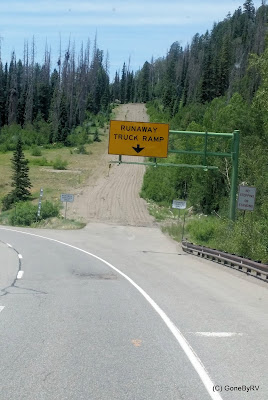 You do not want to be heading down these mountains at an excessive speed and lose the coach's brakes.  When you see areas like these along the route you know that you're in for some steep climbs and descents. 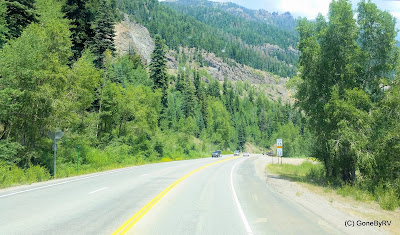 The posted speed limits also remind you to keep those speeds down. This was just west of South Fork, CO. Notice the posted truck speed limit.

All in all,  the drive was much easier than I had anticipated. The keys to mountain driving are to keep the RPMs up on the way up the mountain (to prevent engine overheating) and to keep your foot off the service brake pedal coming down the mountain. I had heard that a good rule of thumb is to head down the mountain in the same (or lower) gear than you made the ascent. That proved accurate for us. 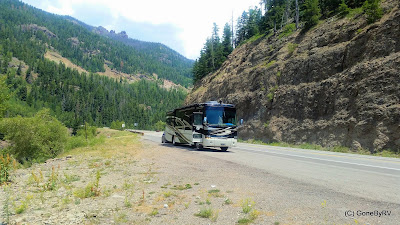 If you are ever in this part of Colorado in a motorhome, don't be afraid to travel this route.  The views are beautiful! There are plenty of passing lanes for speedier vehicles to pass. In this picture we haven't broken down, just a quick stop for some pictures.

Email ThisBlogThis!Share to TwitterShare to FacebookShare to Pinterest
Labels: US160, Wolf Creek Pass