This Is Why We Make Reservations Over Holidays

Posted from near Bernardston, MA
(Click on Pics to Enlarge)

This post is a bit late, but we've been "on the move" lately.  One of the few things we've learned as fulltimers is to make reservations over holidays and to be "in place" somewhere during those times.

Well, we did just that for the recently passed Independence Holiday weekend, but things didn't turn out as planned. Oh well, we got to experience a bit more blacktop boondocking than we would have liked, but more on that to follow.

We are Thousand Trails members and as such we had booked a 14-day stay at Gettysburg Farms in PA to include June 27th thru July 7th.  Seems like a good idea.  Beat the weekend crowds both before and after the holiday.

We arrive at Gettysburg Farms about 1:00 PM. For those not familiar with the TT reservation system, it's a first come, first served situation once you arrive at the park.  We ideally would like to have a 50-amp FHU site because we are going to be here for 10 days.  We unhook the toad from the MH and begin the search for a site.  The first thing we notice is that there are absolutely NO 50-amp FHU sites left in the entire park.

It's supposed to be hot weather for the next few days, so our next level of searching is for a 30-amp FHU site.  Yay, we find and occupy the LAST FHU site in the entire park.  All other remaining sites are W/E only and many are down near the river in a somewhat "soft ground" area. I really don't want to take the chance of becoming stuck with the MH.

Ok, we've set everything up and turn on a single A/C (because of the 30-amp service) and everything seems to be going well.  How stupid of me to think that!  We have a Progressive Industries Surge Protector/EMS system installed in the MH to protect against several different types of electrical maladies. One of these is low voltage. If voltage below 104 is detected, the unit shuts off power to the MH to protect electrical components within. You guessed it, we were experiencing low voltage approximately every 10-15 minutes and the power to the MH would shut down.

To their credit, after contacting the office, an electrician was sent to our site in short order.  They replaced both the 30-amp plug and the circuit breaker at the pedestal, but still to no avail. I suspect we were near the end of the line for this electrical run and the electrical work (being old) was just not able to keep up with camper demand.

Ok, what to do?  Our choices were:  (1) Stay on the site and hope the power got better, (2) move to an W/E only site for the remainder, or (3)  leave and try somewhere else.  We did give Option #1 a try for a bit, but it just wasn't getting any better.  We finally decided to leave the park and headed to our next destination which was the TT Hershey park.

Here's where the real fun began.  Because it was an upcoming holiday weekend we were only able to book the rest of the day (June 27) and we had to leave on Friday (July 1).  At least we've got a few days covered at this point.  Now we begin our campground search for the holiday weekend.  We literally contacted every campground within 2 hours driving distance of Hershey.  After the laughter died down on the other end of the phone, ALL campgrounds advised that they were completely booked for the holiday.  Not to be unexpected, actually, as this is the first big holiday after school has left out for the weekend crowds. 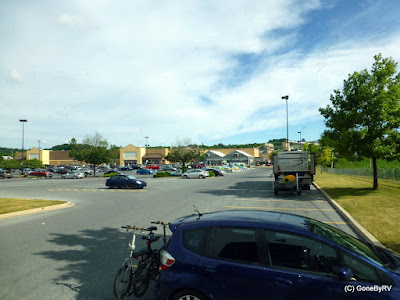 Now what to do.  We finally decided upon testing out the "self containment" feature of our MH by asphalt boondocking for the next 4 nights. We filled the freshwater tank before leaving TT Hershey and set out to the Palmyra Walmart.  Got a nice spot out in the corner of the lot. 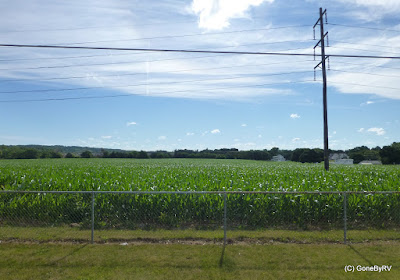 Attempting to be good "overnighters" we parked the passenger side to the curb and only put out our slides on that side of the MH which hung over the grass.  The view out this side was at least tranquil. 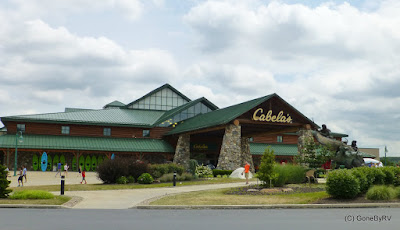 We really didn't want to overstay our welcome (as the manager said it was ok to stay for 1 or 2 nights), so on the 3rd day (July 3) we pulled in the slides and headed to our next spot, Cabela's in Hamburg, PA. 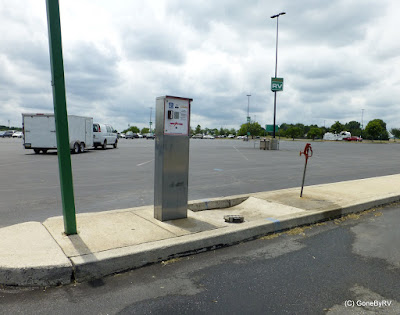 If you've never overnighted at a Cabela's store before, give it a try. They actually seem to like RVers staying in their lots. Plus, spending a few bucks in the store doesn't hurt either.  This Cabela's had several rows on the side of their lot designated for RVs.  The spaces were long.  They even had a dump station which was activated by use of a credit card kiosk at the facility. 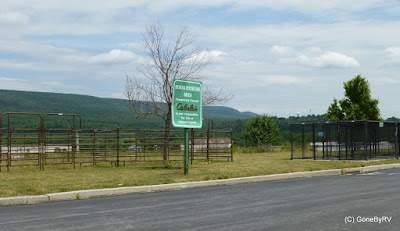 They had several horse corrals and several kennels for dogs in case you wanted to exercise either. 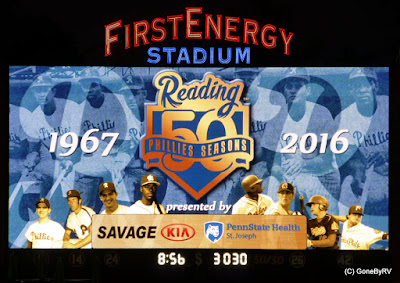 Because we like to attend local Minor League Baseball games when in new areas, we searched and found that First Energy Stadium was located in Reading, PA only 30 minutes away.  On Sunday night (July 3) the hometown team Reading Fightin' Phils (AA team for the Philadelphia Phillies) were due to play the Harrisburg Senators (AA team for the Washington Nationals). 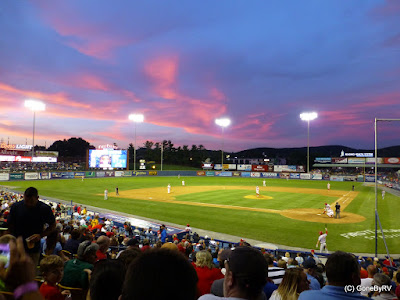 First Energy Stadium is a very cool older stadium. The type with lots of brick and a certain baseball "feel". It was probably one of the best attended games we've been to in some time. 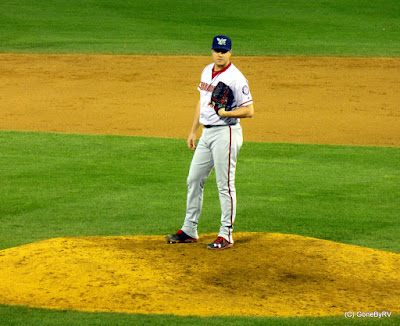 This next paragraph is only for true  baseball followers (especially Washington Nationals fans).  Jonathan Pabelbon, currently re-habbing from an injury, was due to pitch an inning or two for the AA Harrisburg team. He pitched the final inning, although the Fightin' Phils were already ahead by that point and eventually went on to win the game 12-10. 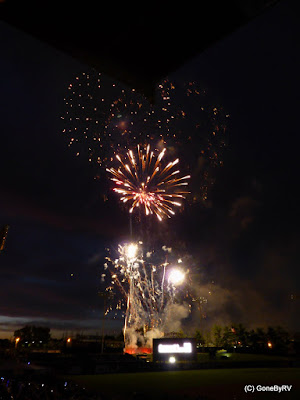 We did get to see a fireworks display this weekend.  The post-game show featured a pretty nice display.

Only one more night to survive the weekend!  For the last overnight (July 4) we drove back to the Palmyra Walmart. We did this mainly because it made for a short drive (about 15 minutes) back to the TT Hershey campground on the following morning.  We stayed at TT Hershey for another six days before moving on.

So what did we learn from all of this.  Most importantly, we learned that we need to have reservations in place for holiday weekends. Even then, however, some things just are beyond your control. Roll with the punches.  We also learned that our MH does great in self-contained mode. We used the generator several hours each morning, and several hours each evening, while making dinner and watching TV and messing with the computers before bedtime. Fortunately, the weather wasn't too hot, but if it had been the generator could have run all day if needed.  So our Independence Day weekend wasn't ruined by any means, it was just different than we had anticipated. At least we know that we can asphalt dock for several days if needed.

Thanks for stopping by to take a look (and listen to my whine).