Really Done It This Time

Well, I finally did it.  After 6 years of careful driving in our rig, I managed to have a collision.  Thankfully not a collision with another vehicle or person, but contact with an inanimate object which was just sitting there minding its' own business.

When we travel, we always use truck stops to refuel.  I like to know that I'll be able to get in and out of their stations without problems. So, I broke our own rule on this one.  We were headed to the Escapees National Rally in Essex Junction, VT on Saturday, July 23rd. Unfortunately, in this part of the country there seem to be no large truck stops (Pilot, FJ, Loves, etc.) to refuel. 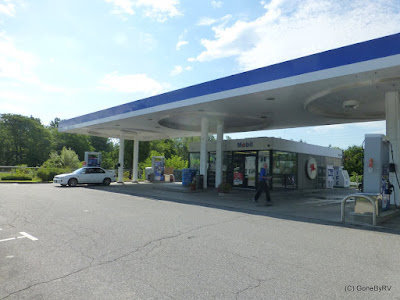 I had tried to do my homework to find a diesel station close to the Escapade.  That seemed to be the Mobil station just off of Interstate 89 in Winooski, VT.  I used Google Earth to get a "birds eye" view of the station and it seemed possible to use as a stop.

A couple of mistakes on my part. Since they advertised as having diesel, I assumed that diesel pumps would be available on at least 2 islands at the station.  That was not the case.

As I pulled into the station from the main road, a single vehicle was blocking the pump at the far right end. No problem I thought, I'll just pull thru, go around the rear of the station, and use the diesel pump on the other end (where the white car is located in the first photo.)

Well, there is no diesel pump over there.  It turns out that the only diesel pump is on the far right end of the station as I initially pulled from the highway. So now I have to circle the front of the station and get back to the original pump again. At the time of the collision with the fixed metal post, there were two vehicles parked parallel to the highway at the front of the station. I attempted to turn around the post, miss the cars, and head back to the other side of the station. Doing fine until this pole "jumped" out and bit the side of the rig.

Backed away from the pole, but the damage was already done. We did manage to get fuel, however. Probably the most expensive fuel stop I'll ever make! 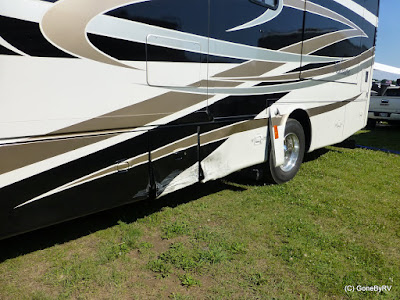 We continued the 3 miles to the Escapade and got set up. It gave me a chance to take a closer look at the damages. It's a lot more than cosmetic. 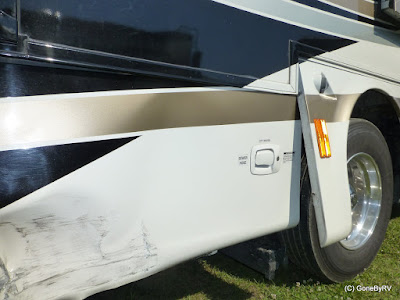 The greatest intrusion was to the compartment just in front of the DS wheel.  Of course this happens to be our "wet bay" where the connections for the water and sewer are made. 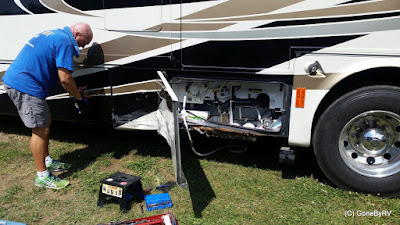 You might be able to see that the door was forced both back and up thus preventing us access to the compartment. With the aid of several other folks here at the Escapade we managed to at least get this door open which allowed us to connect to the water line. I can foresee the use of a LOT of duct tape in our future to limp in for repairs.

Speaking of repairs, I contacted our insurance company shortly after arriving at the Escapade. I received a return call in short order from a repr. at Progressive's claims center. I explained to her that we are fulltimers and would really like to get the rig repaired in Red Bay, AL. This is at the Tiffin Service Center and we'll hopefully be using a body and paint shop which I trust there.  She didn't have a problem with that and would attempt to have an adjuster come to the Escapade on Monday (today) and get the paperwork rolling on this claim.  I also advised her that we would be in this location until Friday (end of the Escapade).

Well, of course, we've run into our first little hiccup.  We received a call from the claims person late on Monday afternoon and she advised that her adjuster would not be available anytime this week. Her advise now is to wait until we get back to Red Bay, AL and to have a local adjuster come out at that time.

I really don't have any problem with that, other than it will just slow down the initial process of getting us into the shops.

Looks like the rest of the summer is going to be shot with an extended stay in Red Bay in our future. Think about it, what better place to be than in the south in August (and maybe September)?  Yes, I am being very sarcastic at this point.

Other than this, we're enjoying a good time at the 56th Escapees Escapade.