Due to limited time in Savannah, we needed to find a way to see as much of the city as possible in an efficient manner.  After a bit of research on the internet we decided to use Old Town Trolley Tours as our vehicle (pun intended). They are not the cheapest in town, but I would certainly recommend them. They sent a trolley directly to our campground at Red Gate to pick us up and take us to their starting point at the Savannah Visitor's Center.  That's worth it to me as it saves me the trouble and expense of driving and feeding the parking meters in Savannah.

They employ a "hop on, hop off" system.  Their narrated tour lasts approximately 90 minutes if you stay on the trolley and listen to the entire loop of 16 stops.  We decided to do this first to determine which areas we wanted to visit.  Believe me, there are many things to see in Savannah.   So many, in fact, that we purchased a two-day ticket which allowed us even more time to travel and board the trolley at our leisure.

There are many touring companies in Savannah.  Also, there are a huge variety to choose from.  You can take strictly walking tours, ghost tours in the evenings, or history and architecture tours, just to name a few. 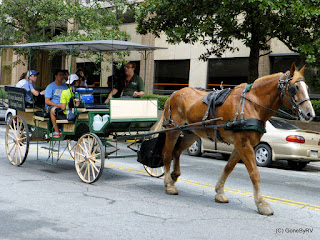 Here's a few "modes" of tours. 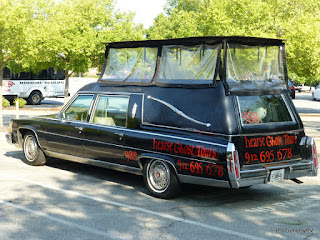 As a bit of background history, Savannah was established and "laid out" in 1733 by General James Oglethorpe.  Gen. Oglethorpe originally designed the city to include 24 Squares.  These today appear as miniature park areas around which homes and businesses were built.  Only 22 Squares survive to this day as the Savannah Civic Center and Savannah Courthouse now occupy the 23rd and 24th Square.

Wright Square contains the remains of Tomo-Chi-Chi, of the Yamacraws Indian Tribe, who was often thought of as a co-founder of the city.


A monument to Oglethorpe is located in the center of Chippewa Square.  This Square also happens to be the location where Forrest Gump's bench was situated in the movie Forrest Gump. 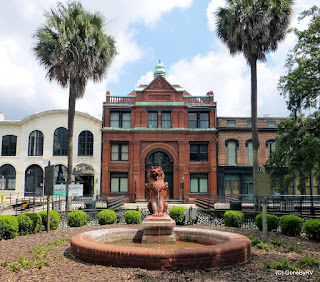 Of course, Savannah's waterfront was also key to its' importance from both a trade and defense standpoint.  Today, many of the original trade buildings have been converted to shops. Cotton became an important crop to Georgia and the Old Savannah Cotton Exchange set prices worldwide. 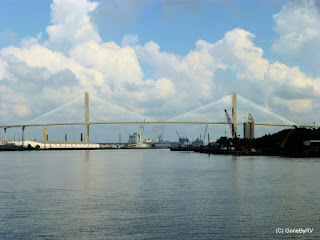 Today, travel between Georgia and South Carolina has been made much easier by the completion of the New Talmadge Memorial Bridge in 1991. 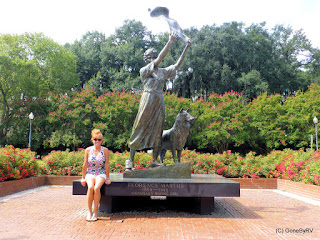 The story of the Waving Girl statue can be found HERE.  If true, it's a testament to her devotion. 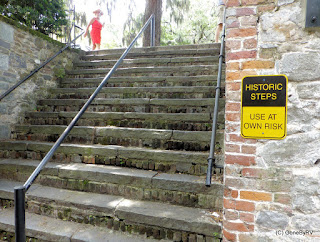 The Historical Society of Savannah has done a very nice job of preserving the history of the city. The waterfront area has many of these examples, but even a simple set of steps draws attention to days of long ago. 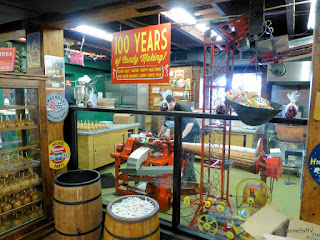 We're not big into shopping when touring a new area, but the Savannah Candy Kitchen caught our eye (and noses) as we were passing by.  The sign indicates that this taffy machine has been operating since 1914.

There is no shortage of churches in Savannah today. During the formation of Savannah, however, Catholics were forbidden.  Oglethorpe's reasoning for this was that should battles break out when the Spanish (down in Florida) were attempting to cross Georgia to get to the rich state of South Carolina, that Catholics would more than likely side with the Spanish because most of Spain was Catholic at that time. 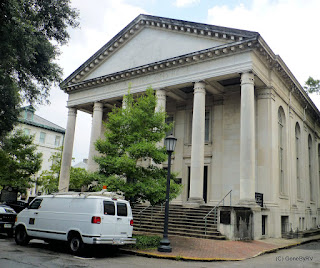 The First Baptist Church, completed in 1833, is Savannah's oldest standing church.  It was spared destruction during the Civil War. 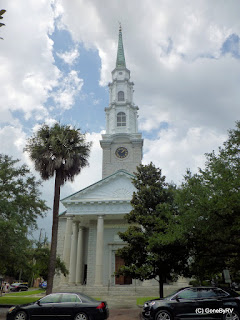 The Independent Presbyterian Church was used in the movie Forrest Gump.  The church steeple of this church is the one in which the feather encircled during the opening scenes. 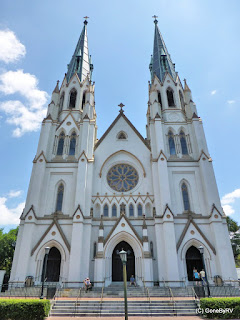 Probably the most visited, and I think the prettiest church in Savannah, is the Cathedral of St. John the Baptist.  Admission is totally free and certainly a visit is in order. 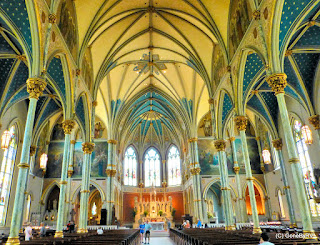 Here's just one of several pictures of the interior of the Cathedral.  (Teaser:  Many more interior pictures can be viewed in my Google+ Album.)

One of the biggest draws of the historic section of Savannah is in the beautifully restored residences.  You could walk around for several days just looking at the homes and architecture of the period.


There are a large number of "mansions" in Savannah as industries such as cotton, metal foundries, and others fueled the wealth of the area.


The Hamilton-Turner House (Inn today) was the first residence in Savannah to have electricity.  It was almost destroyed in 1965 to make room for a playground. Thank goodness the Historical Society stepped in on this one. 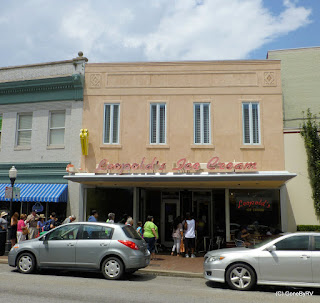 All of this touring is hard work! That means that is was time for a treat.  Remember, it's August in Savannah.  That means hot and humid. Part of the trolley tour directed our attention to Leopold's Ice Cream on East Broughton Street. Leopold's was founded in 1919 by three brothers from Greece and has remained operating within the family since that time. 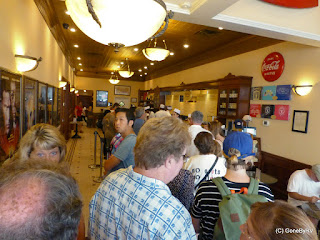 Leopold's has been rated as one of the top ice cream shops in America.  The lines would certainly attest to this.  Though long, at times, they do move quickly, however.   We definitely give it a BIG thumbs up!

Looking back at this blog, it's getting a bit too long.  Let me just end by saying that a visit to Savannah is well worth it.  Also, I have many, many more pictures in our Google+ Album that I didn't post to the blog. Please take a look.