I can't believe it's been so long since my last post.  With that being said, we've been in the state of Florida for about a month now.  We made our way to several spots in FL for the specific intention of seeing some friends I had worked with prior to retirement.  I'm very happy to say that we accomplished that goal.  The downside to all of this is that we're in Florida in July.   That means hot, HUMID, and thunderstorms nearly every day.

We moved over to the Orlando TT preserve just south of Clermont and stayed there from June 25th to July 9th.  Our friends John and Mary Potter have retired to a beautiful community just north of Clermont.  We were able to visit with them and to see their beautiful new home and to have dinner at their home one evening.  Thank you again John and Mary. 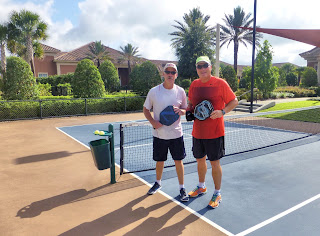 The Trilogy community they live in currently has 3 pickleball courts and their members are growing in ranks since beginning play not too many months ago.  Karen and I played many times with John while we were in the area. 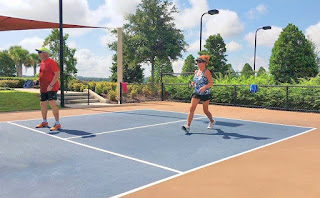 For all of our pickleball folks back in Arizona, here's proof that Karen and I actually play together from time to time.


As I mentioned above, Trilogy is a very nice community with great facilities.  After our Sunday morning games we were "forced" to have lunch at the Magnolia Grill restaurant on site. Very nice!
(Please excuse the blurriness of the picture. The waiter was a bit shaky with the camera) 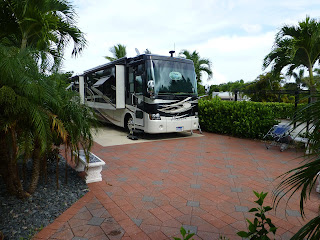 We moved further south on July 9-16 to the Ft. Myers Beach area and stayed at Gulf Waters RV Resort.  This is an ownership resort and I'm sure it is quite busy during the winter months, but there were probably only 10-15 rigs in the park while we were here.

The resort has very well-maintained facilities and even 4 pickleball courts, but we didn't see one person playing during our entire stay. 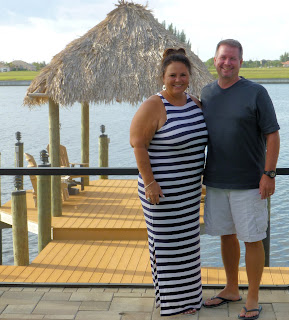 The main reason we dropped down to this part of Florida was to visit with Ellen and George Motley, co-workers of mine in my prior life. They re-located to Cape Coral a few years ago and live along a canal with access to the Gulf in a beautiful home. 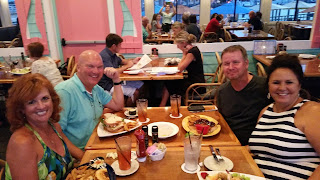 After touring their home we jumped in the car and headed to Nervous Nellie's Restaurant on the waterfront at Fort Myers Beach.  Great food and great company.  It doesn't get much better than this!  I would highly recommend  this restaurant if in the area. 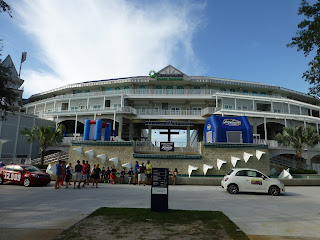 The Fort Myers area has a single-A advanced minor league baseball team and readers of this blog know that we like to attend minor league games when possible.  The Fort Myers Miracle (farm team for the Minnesota Twins) were pitted against the Clearwater Threshers. The Miracle play in one of the nicer venues we've seen at Hammond Stadium. 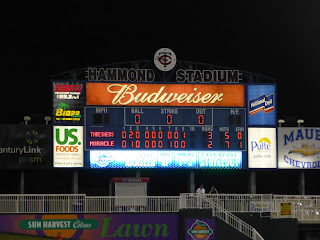 Of course, true to form, we jinxed the home team and they were defeated 3-2.  It was a very enjoyable evening nonetheless. 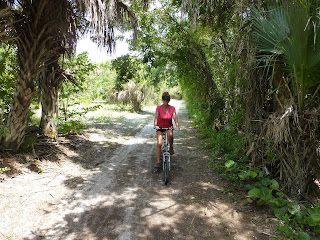 We had wanted to visit Sanibel Island and Captiva Island before leaving, but the days we had planned to go, the rains killed those plans. Maybe on another visit. At the suggestion of George Motley, however, we did make it up to Lover's Key State Park. This park is located north of Ft. Myer's Beach and is situated on the Gulf with plenty of backwater for canoeing, kayaking, hiking or biking.  We took our small bikes and rode some of the trails on Black Island. 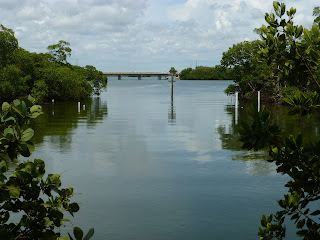 I wish that we had reserved more time to do some kayaking in the park.  The bird population was abundant for folks who like to engage in that activity. 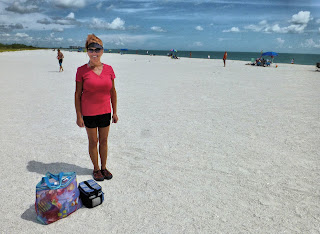 Before leaving Lover's Key we had a chance to walk along the beach for a short while.  I ventured into the water, but Karen preferred to stay on the beach. The beach in this area is not the sugary sand consistency we found in some parts of the Gulf, but rather is composed of very small bits of shells ground by the pounding of the surf.

After Ft. Myers, we headed back up to again stay at the Orlando TT preserve from July 16-July 30. The reason was two-fold.  Since we are TT members, it costs us $0 to stay for another 2 weeks (after annual dues, of course) and we wanted to visit more with the Potters. 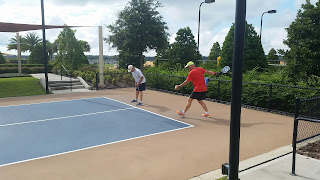 We again played a "bunch" of pickleball. 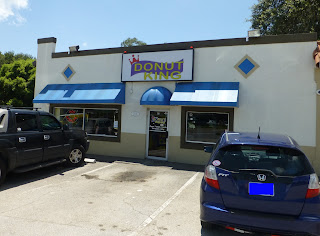 John told us about a local donut shop named "Donut King".  I know it seems somewhat counter intuitive to exercising and sweating while playing pickleball, but we had to give it a try. 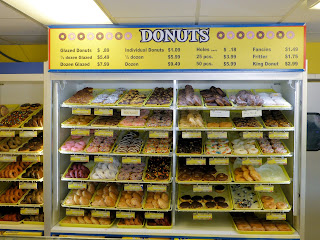 I'm very happy to say that we purchased only one doughnut each.  I will have to tell you that this place's doughnuts are the "crack" to sweet addicts. 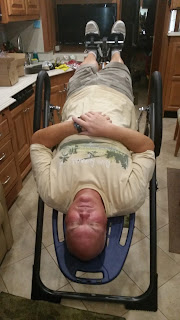 Before rambling on too much longer, let me mention a device I tried out.  I've had back problems for several years now. The sciatic nerve pain comes and goes, but I also learned a few years back that I had an "old" fracture to one of my vertebrae.  It's just something I tolerate as the pain comes and goes.  I was watching a television ad one evening for the Teeter Hang Ups inversion table.  I figured I'd give it a try since the local Dick's Sporting Goods store had one in stock.  I'm sure it works for some folks, but after several weeks I returned it to the store for a refund.  It really didn't seem to do anything for me and as a fulltimer in an enclosed space it takes up a bunch of room.  I'd love to hear from other users of this device, however.  Just my findings!

In looking back over this post, it's truly a conglomeration of a bunch of unrelated topics, but I wanted to get "caught up" with our blog.  Did I mention that July is probably not the best time to visit Florida.  If I didn't, let me say it again.  It's darn HOT and HUMID this time of year.