Posted from the Grand Canyon  (click on pics to enlarge)

This was our last hike in Arches NP and I believe it was the best.  It has many different elements offered in a single hike.  You've got lots of arches, beautiful scenery from the ridges, "fins" to rock scramble across, and the trail itself is varied.  For those with less time or physical ability, the first part is basically on a flat, well groomed trail. For the more adventurous there are steep climbs, scrambles over slickrock, and narrow ledges (and that's even before you enter the "primitive" trail). 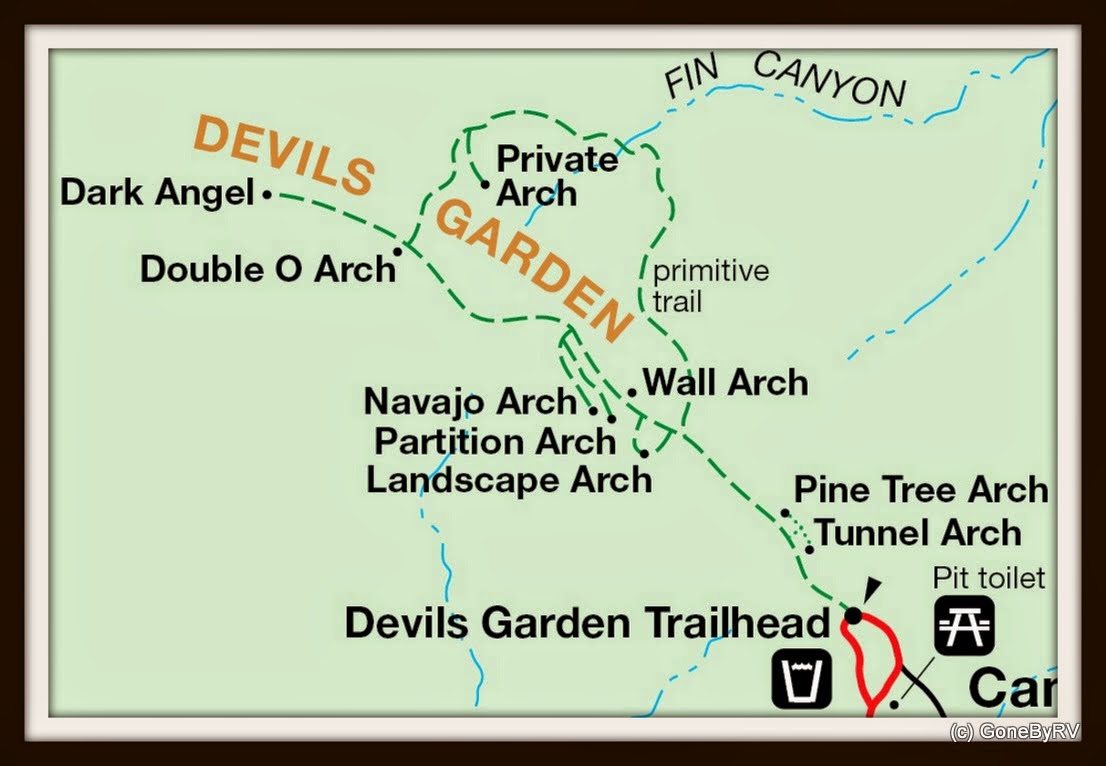 We originally intended to just head out to Dark Angel and come back to the trailhead along the same route. By the time we got to Double O Arch we changed our minds and returned along the primitive trail.  The NPS map indicated a total distance of approximately 7.2 miles, but by the time we saw every arch along the way, the total distance wound up being a bit over 8.5 miles  More on the primitive section later, however. 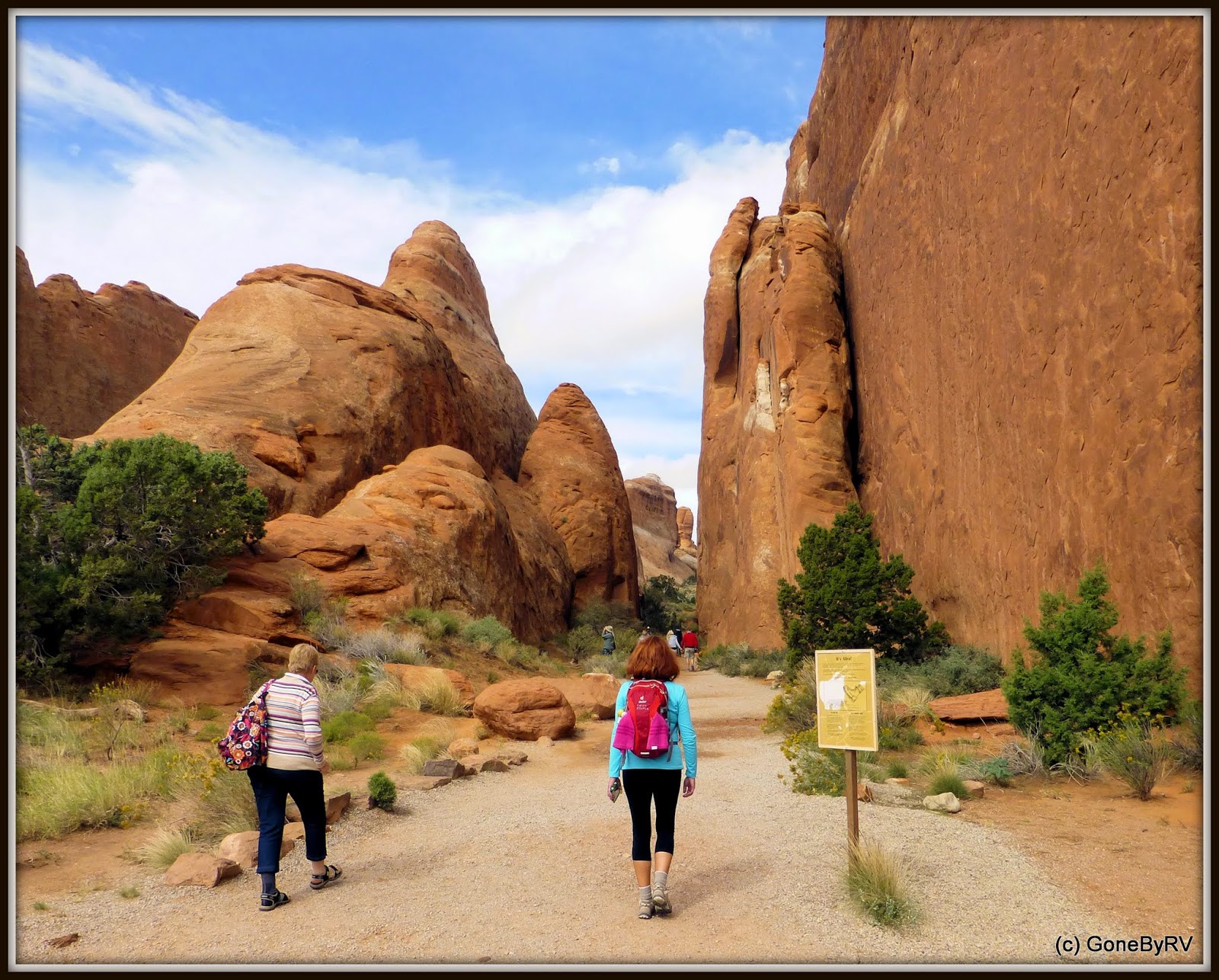 As I indicated earlier, the start of the trail is very "tame". Two tall verticals frame the beginning walk.

We took the first side trail to view Pine Tree Arch and Tunnel Arch. The only reason I could determine why it was named Pine Tree Arch was because of a pine tree growing right in the center of the arch's floor.

Tunnel Arch was only a short distance back toward the main trail.  I have to say that it was one of the least impressive arches, however. 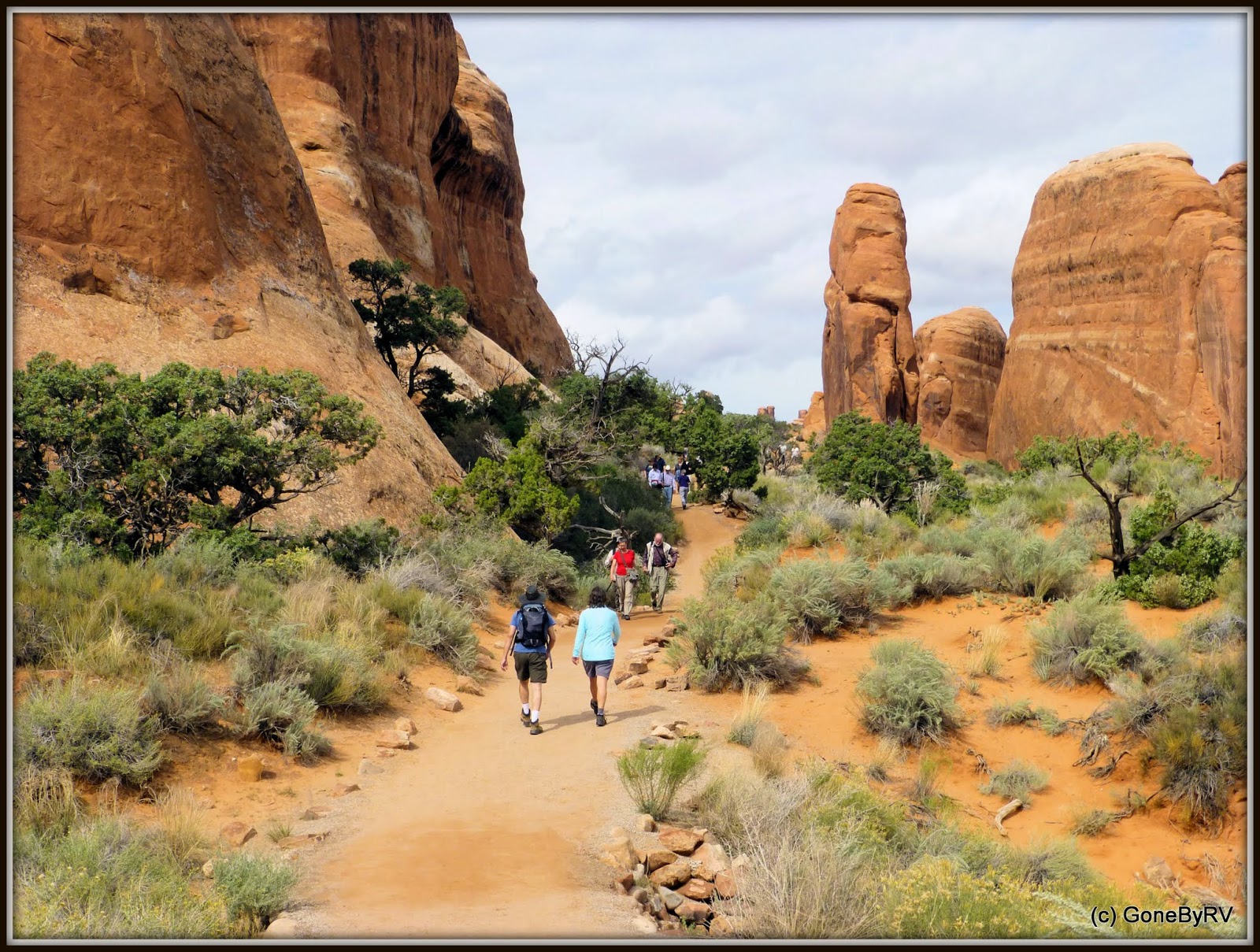 The first 1/2 mile or so of the trail was pretty busy.  That's probably because we again got a late start (around noon) and it seems like many other folks have a similar mindset.  The starting temperature was in the low 60's.

The end of the most visited part of the main trail culminates at Landscape Arch.  This one, to me, should be re-named extremely delicate arch.  Back in 1991, a large section of rock fell from the section of the arch leaving a very narrow strip of rock to form the arch. (I would have loved to have been in the area when 60 feet of rock fell to the earth.) 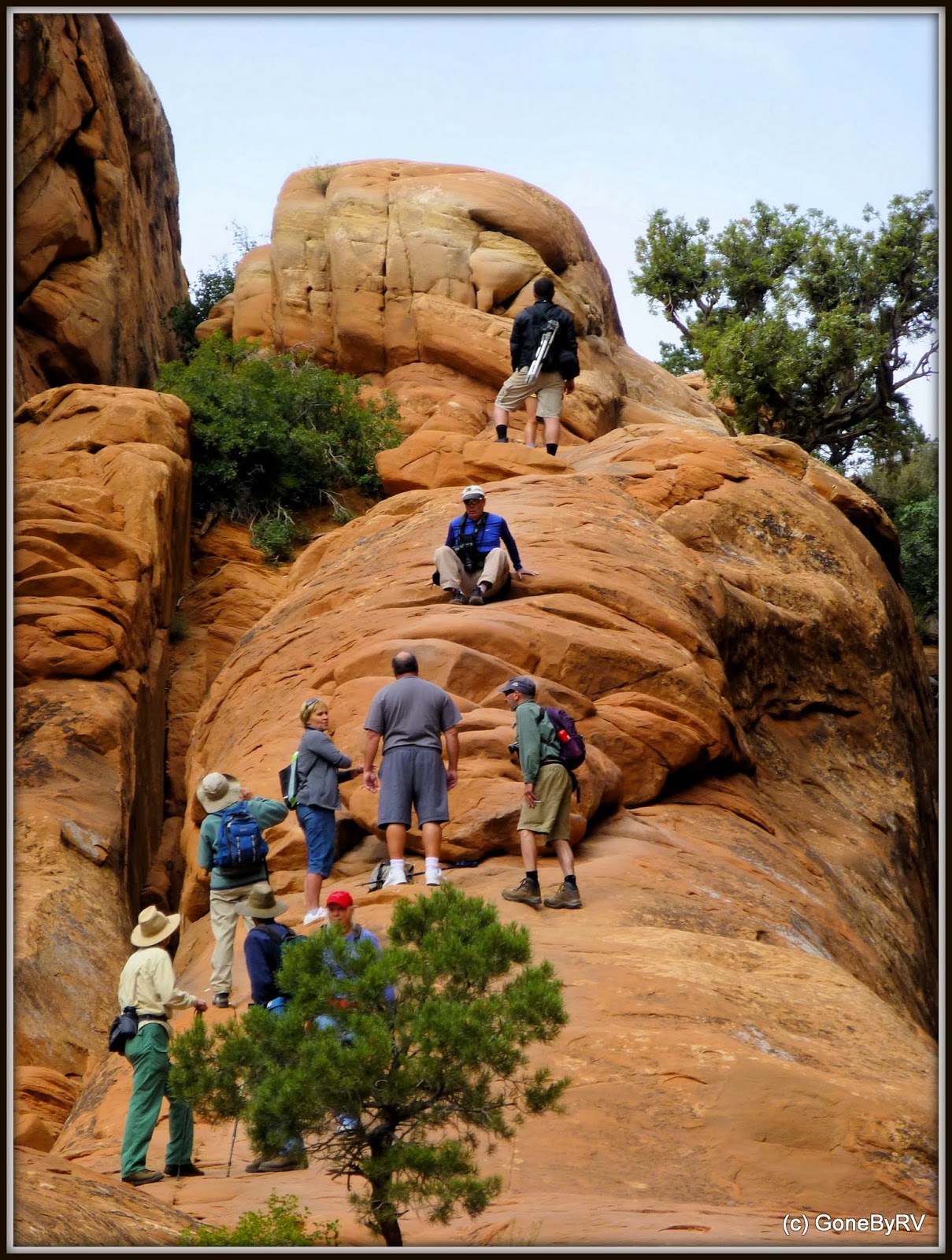 Beginning after Landscape Arch was a section I enjoyed.  This picture shows a gentleman "keeping a low center of gravity" as he descends the steep and narrow slickrock. 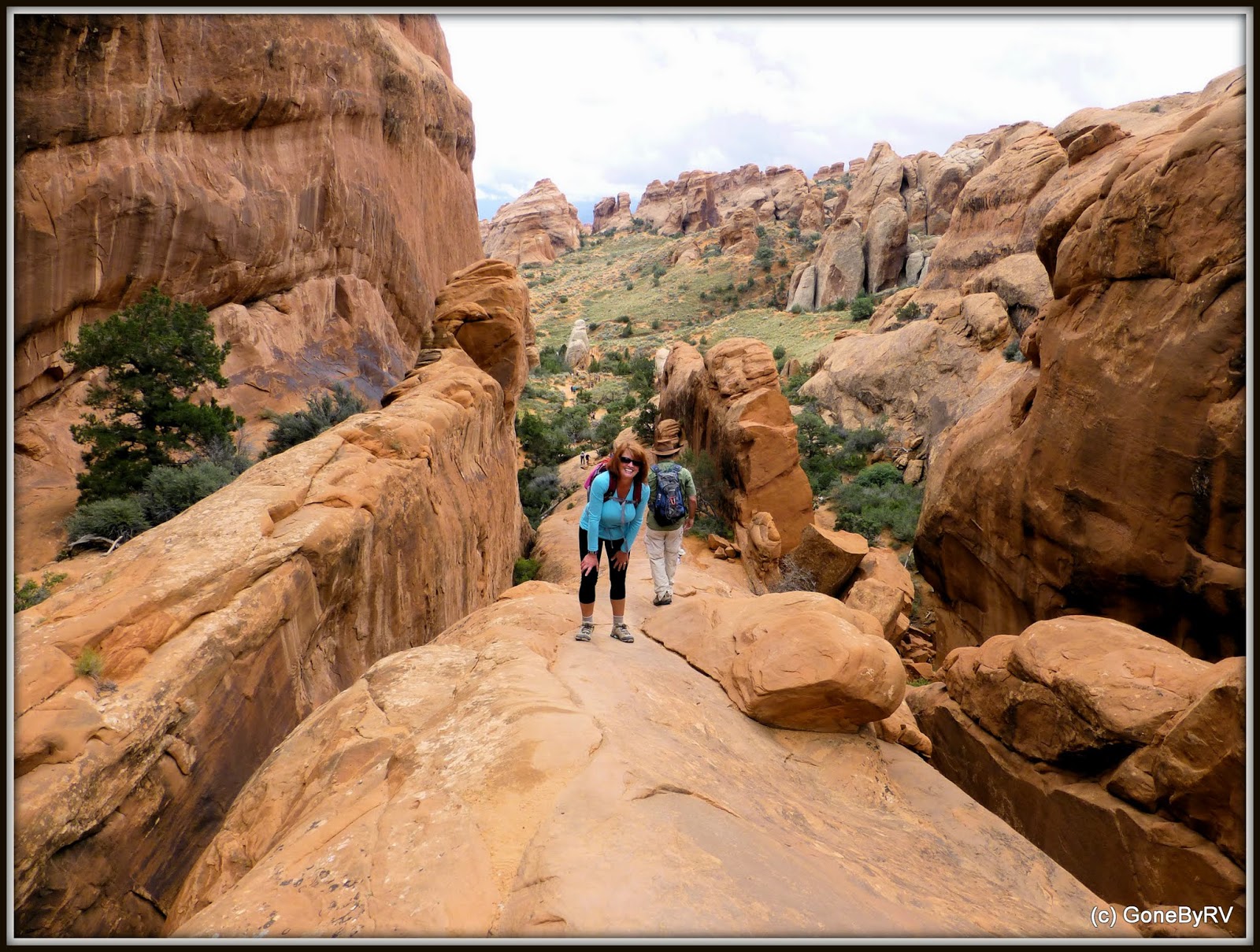 Here's Karen taking a moment after making the ascent of the same rock group shown in the previous picture.


The next little side trail takes us to Partition Arch. The view through this arch to the valley below was spectacular.


On our trek toward Navajo Arch we came across these bizarre looking vertical walls created as the result of erosion. 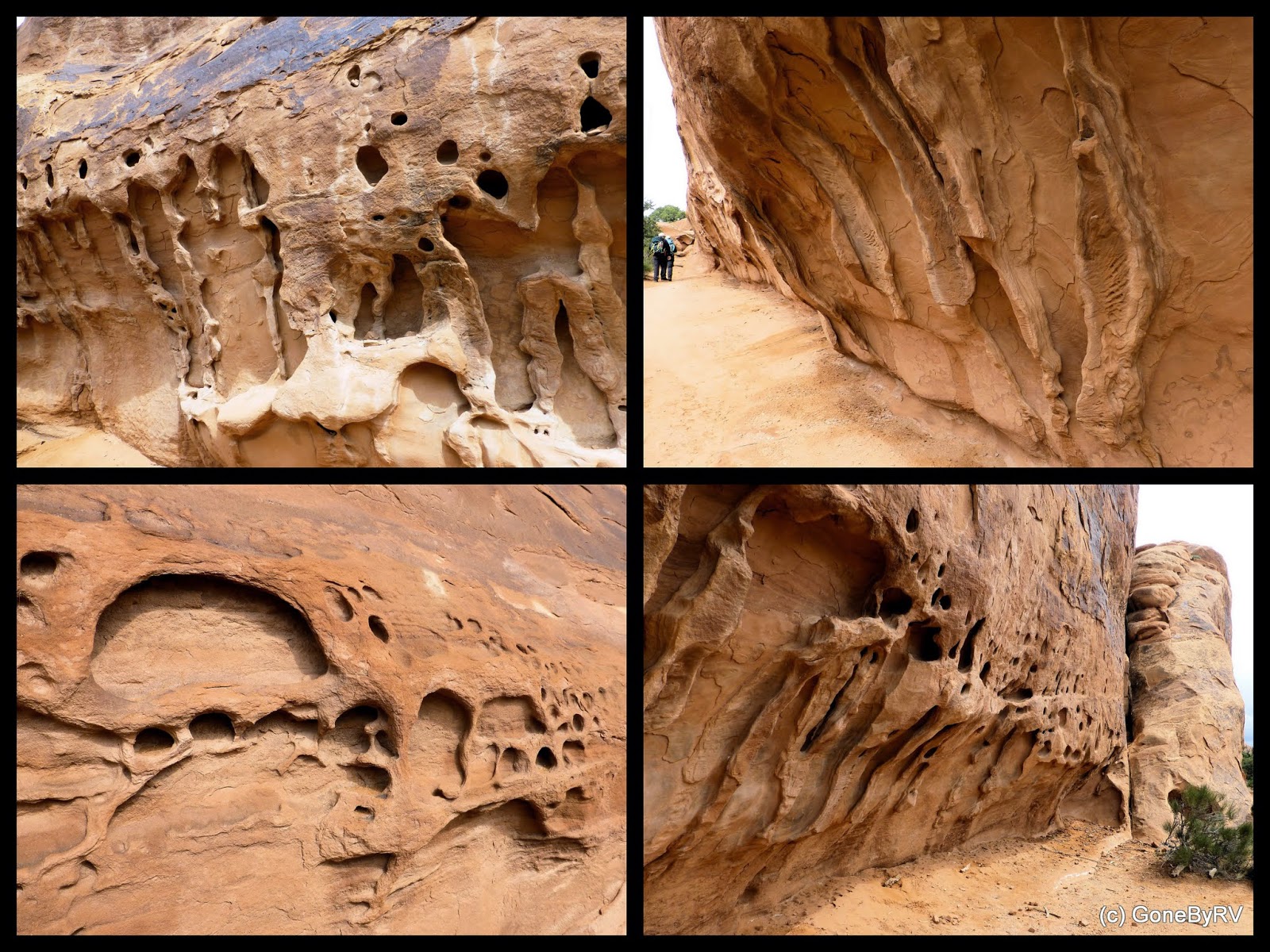 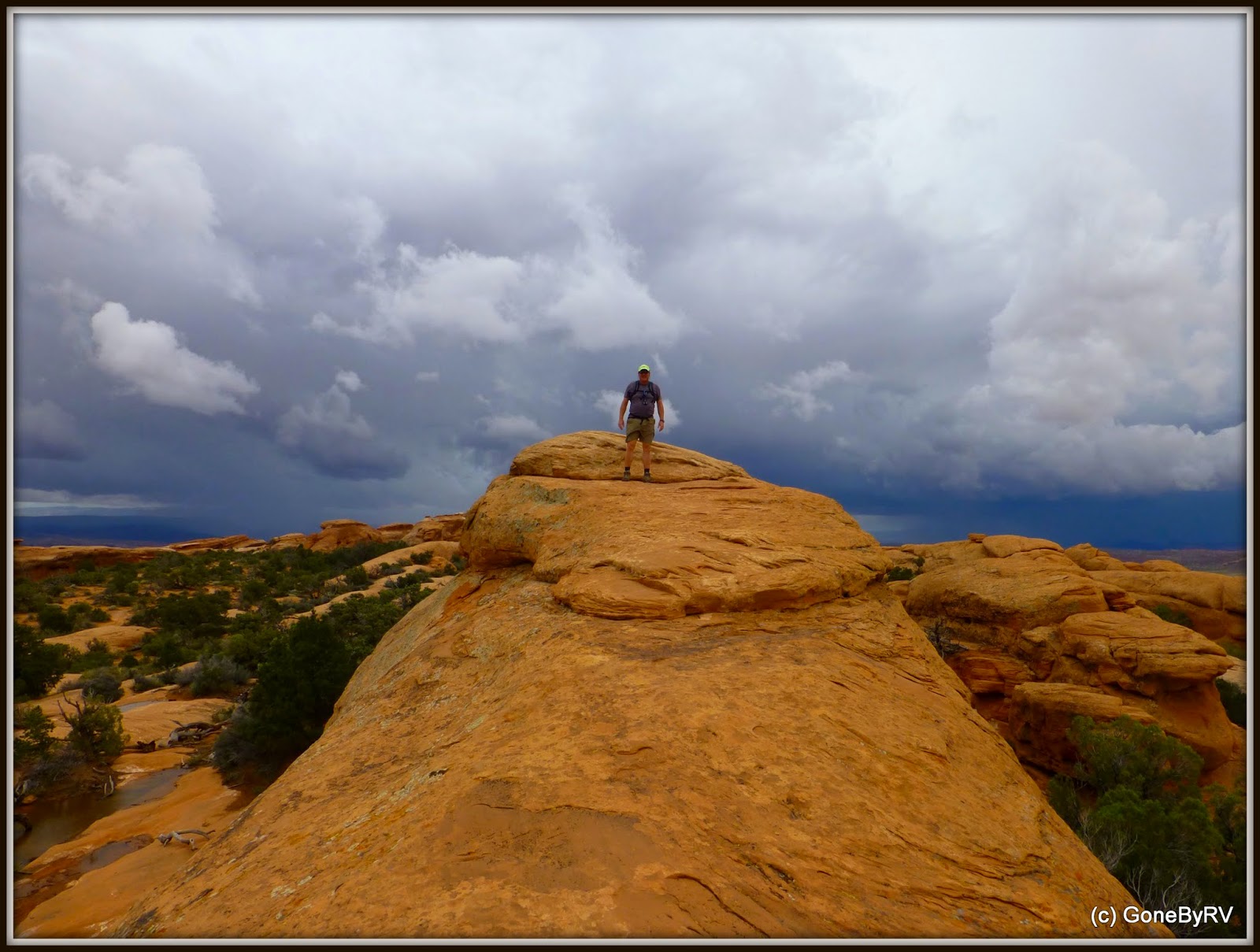 We're almost 2 hours into our hike at this point and the dark clouds are rolling in.  We hope that they will bypass us and head north.  Turning around at this point really isn't an option. 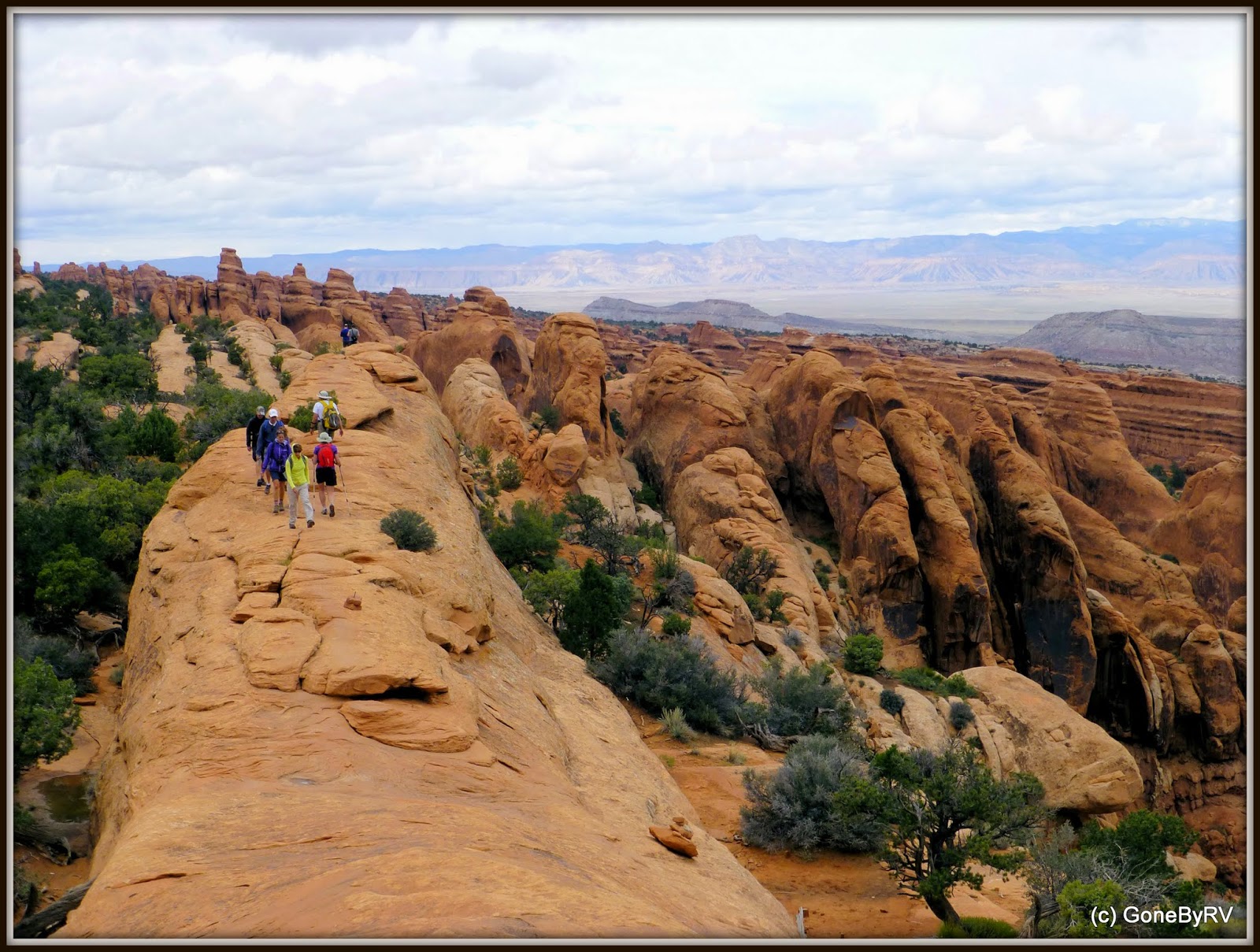 The vertical closely formed walls are called "fins".  Here we are beginning to cross a section of fins as the raindrops are beginning.  Slickrock is not a good place to be when it's raining. 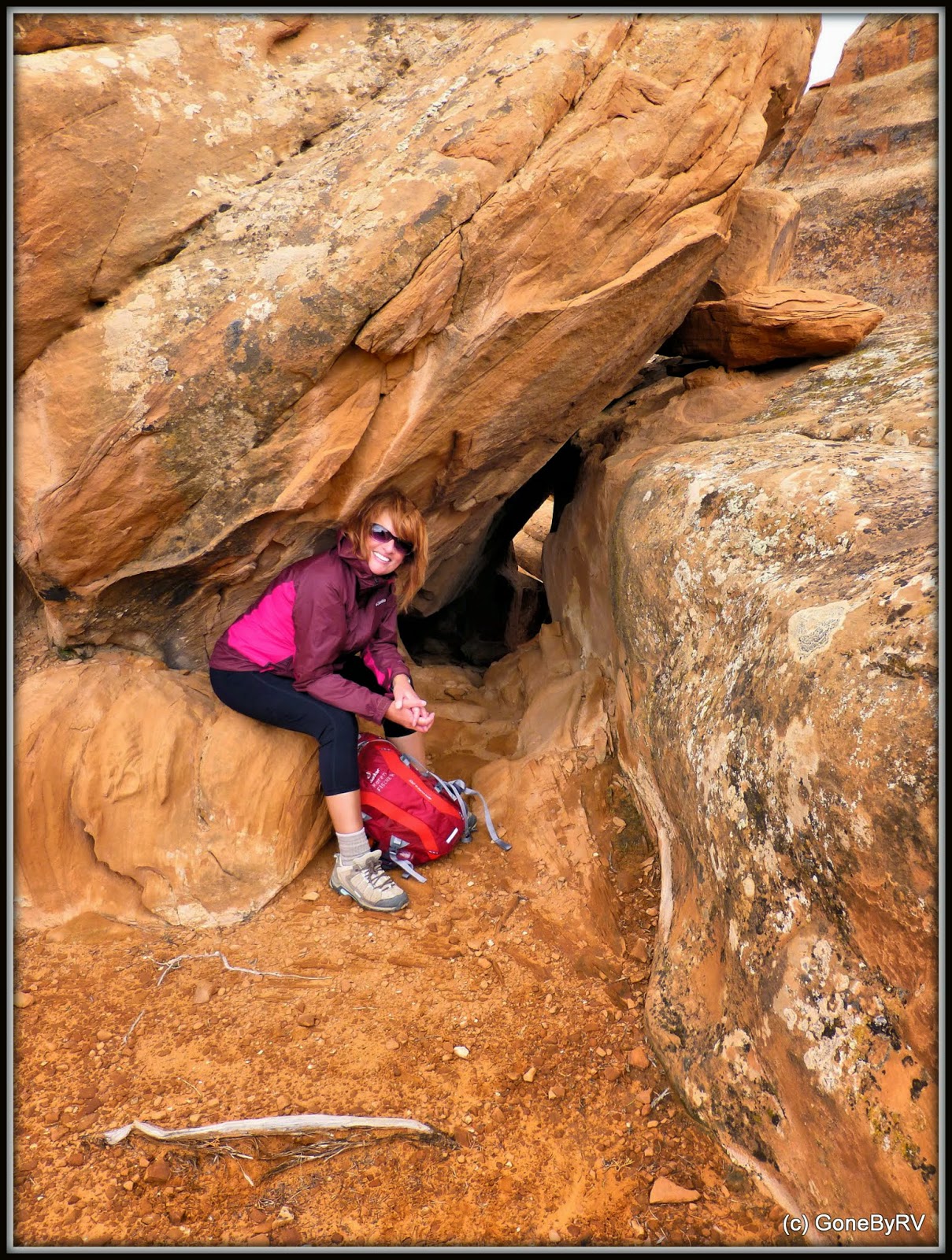 Ok, it's time for lunch anyway.  With the rain getting closer we seek out some shelter.  Fortunately, the rain is still fairly light.

At Double O Arch we had the option of continuing to the end of the trail at Dark Angel, or beginning the primitive trail for our return. 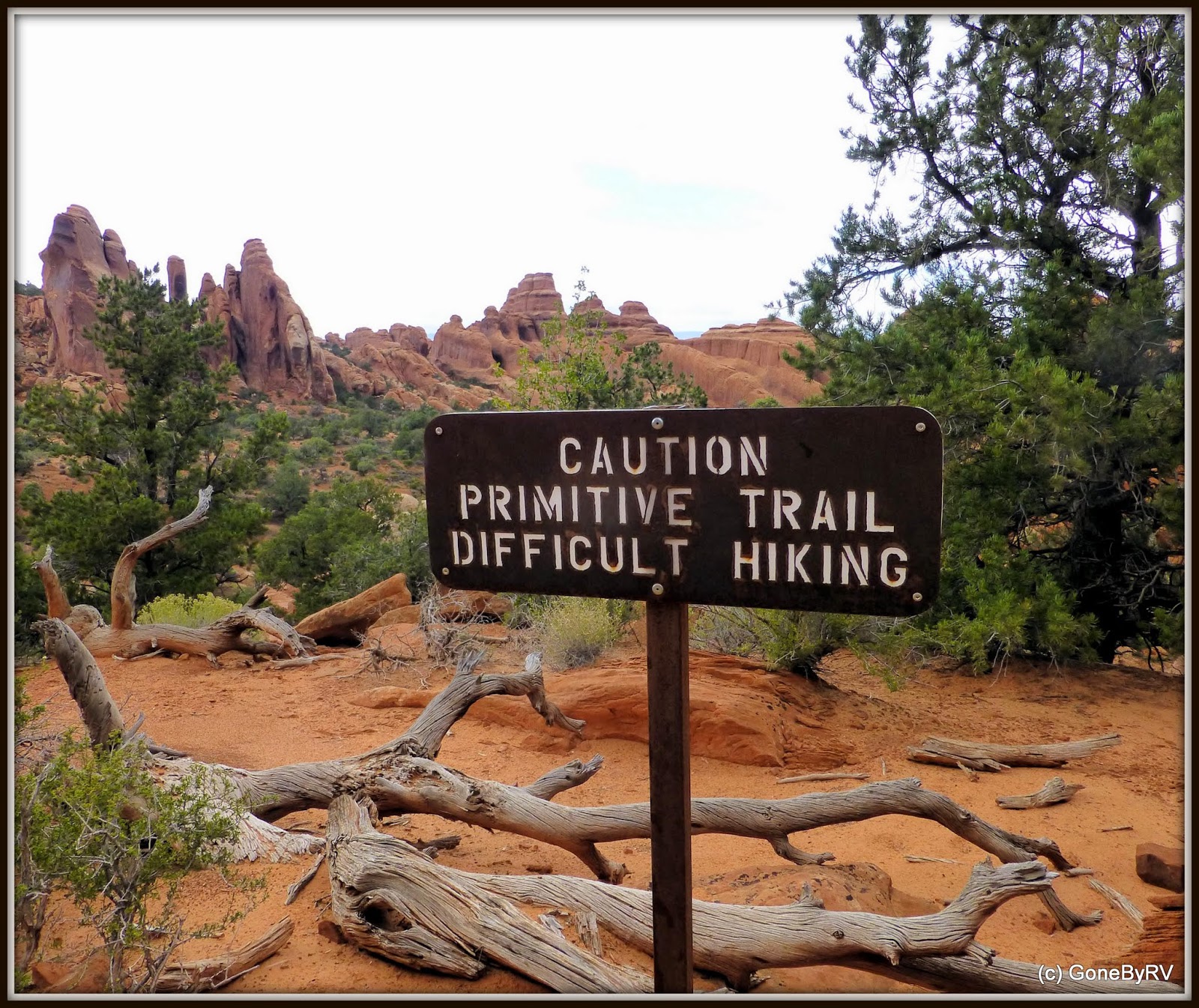 Because of the impending storm, we shortened the hike and turned onto the primitive trail.  Paying attention to signs is a good idea. The decription of the primitive trail in the NPS guide read "Expect narrow ledges with rocky surface hiking and scrambling on slickrock. Not recommended when rock is wet or snowy."


The primitive trail is aptly named.  There are very few directional signs on this trail. It's important to understand how to follow cairns in this area. The first side trail took us to Private Arch. This is an appropriately named arch as it cannot be seen hiking toward it on the trail.  You come around a wall (where Karen is standing) and there it is. 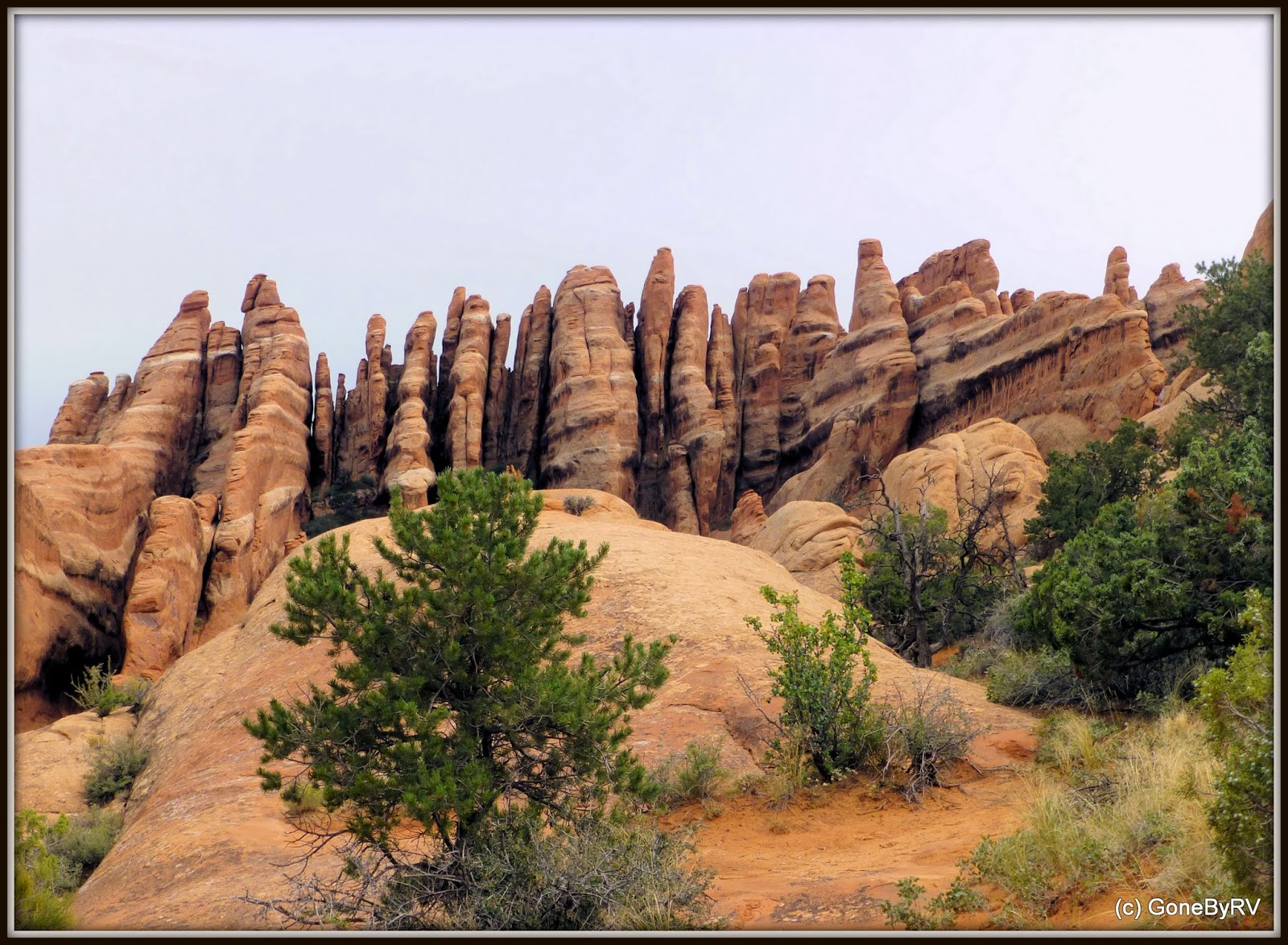 I just threw this picture in because I like the "fins". 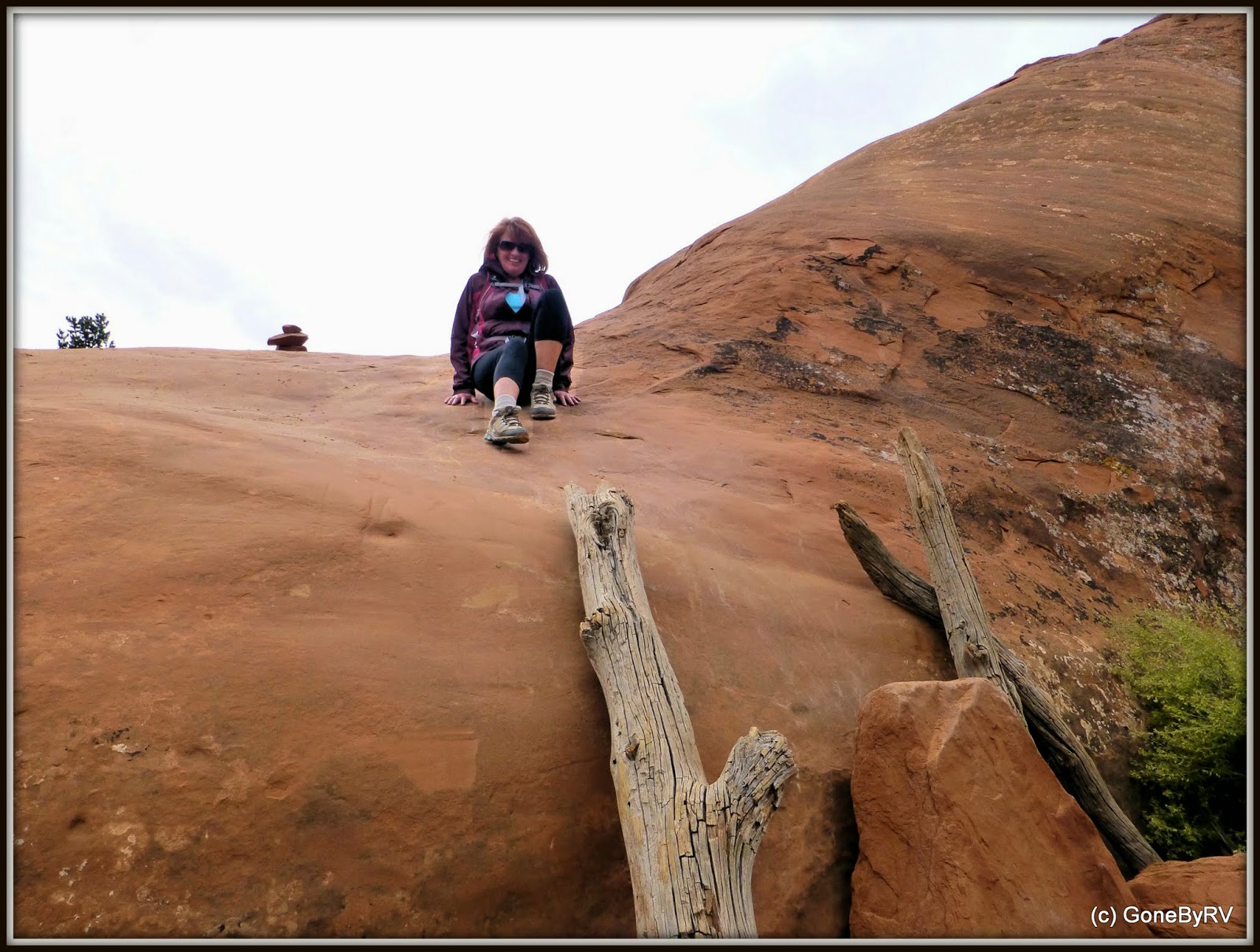 Some of the rock scrambling got a bit steep at this point.  Combining verticals and lack of good foot holds, sometimes this is the best method to get down. 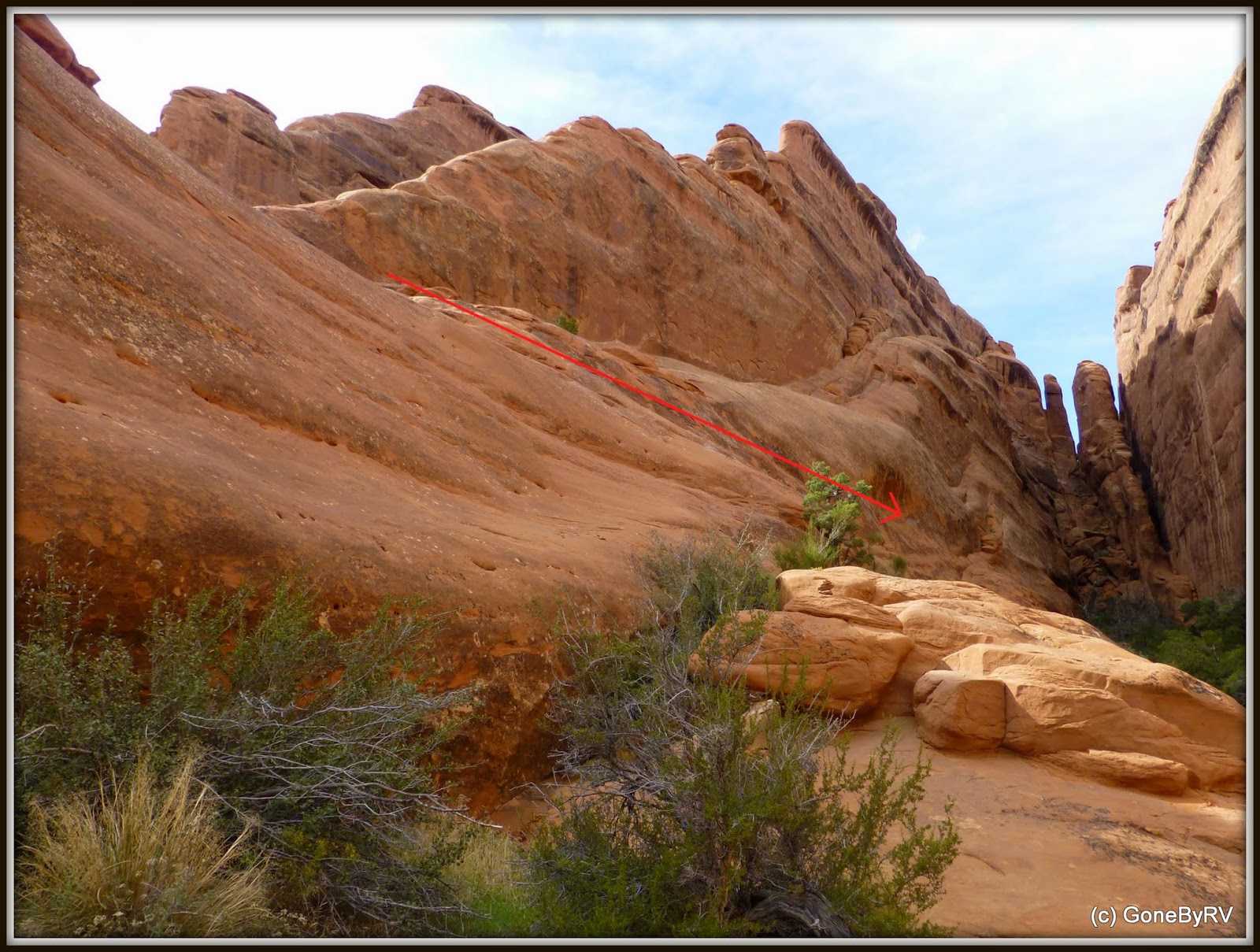 This was probably our "scariest" section of rock to cross.  I didn't get any candid shots here because I was trying to keep from slipping. The rock was actually flatter and higher than it looks in this picture. (I added the red line to show the direction we used to traverse this section.) 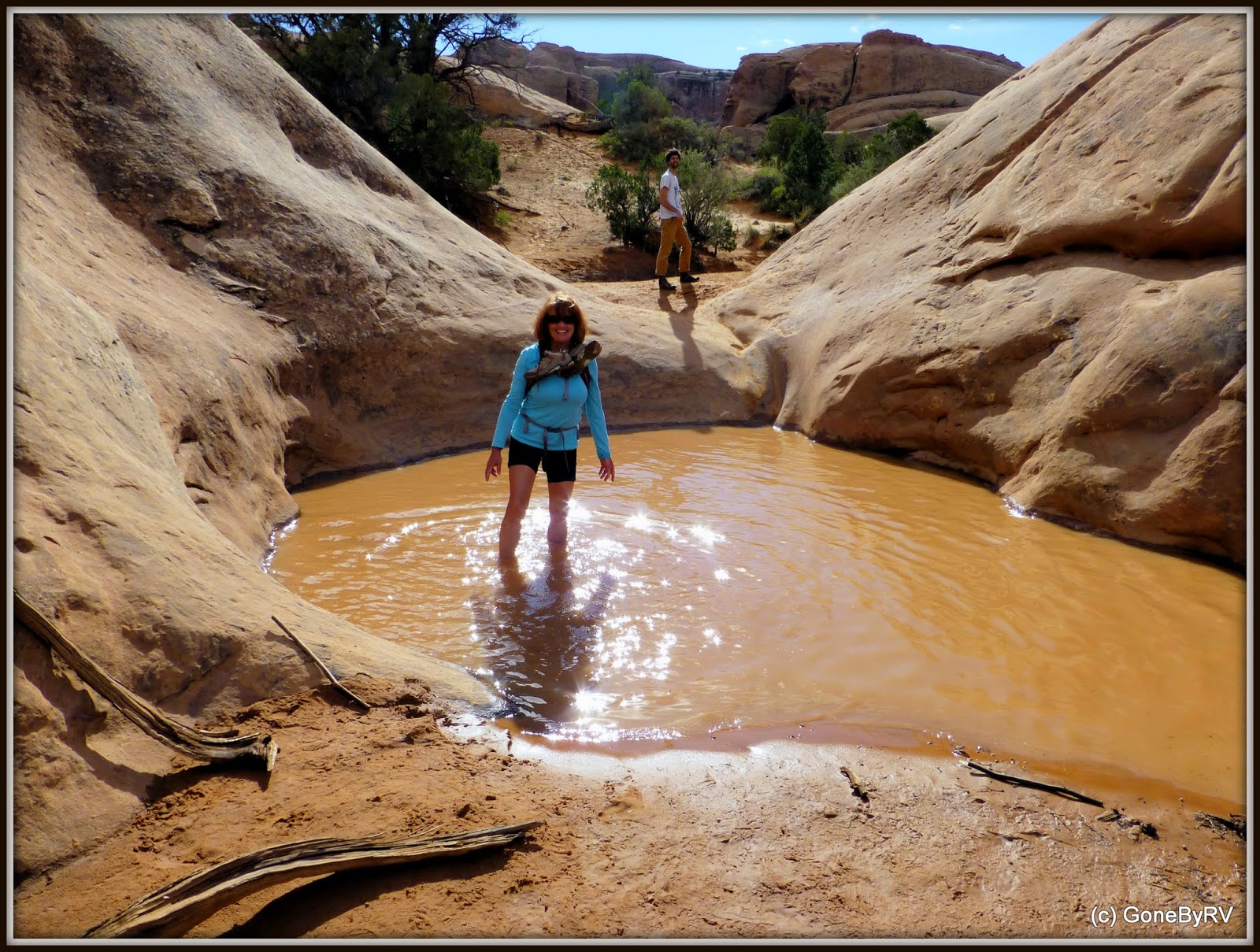 Remember that standing water I spoke about back near the Navajo Arch? Well, we found some more. We're almost 4 hours into the hike now and getting a bit tired.  We should have only about another mile or so to the finish, but now we come upon an impasse in the trail.  There is no way to climb around the water on one side and the other side is a very narrow bit of slickrock. We were told by other hikers on the trail that the water was about thigh deep.  Ok, that's the route then.  COLD! 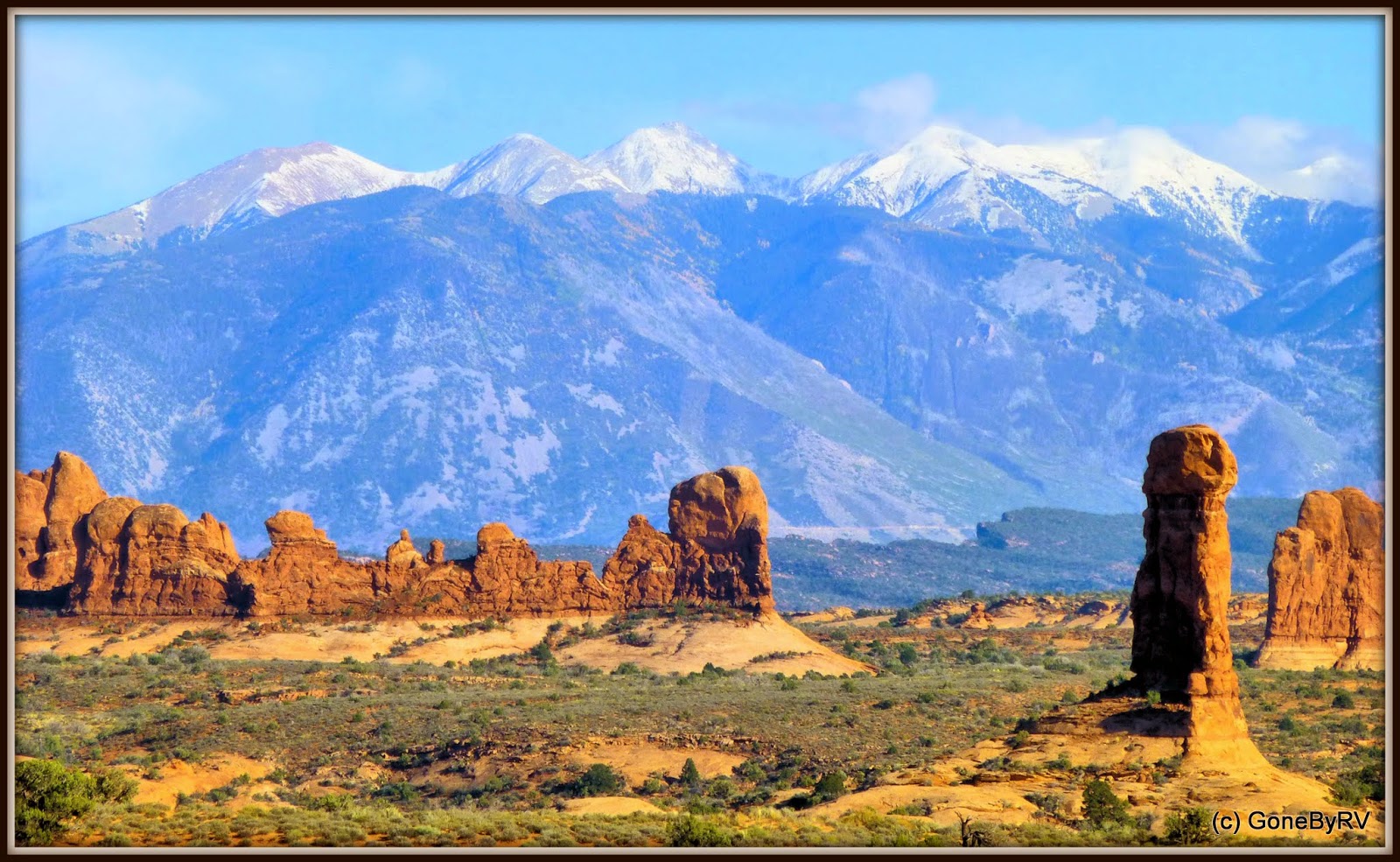 Back on the trail again and heading toward the finish.  The rains we've had the past couple of days met the ground as snow in the higher mountains nearby. 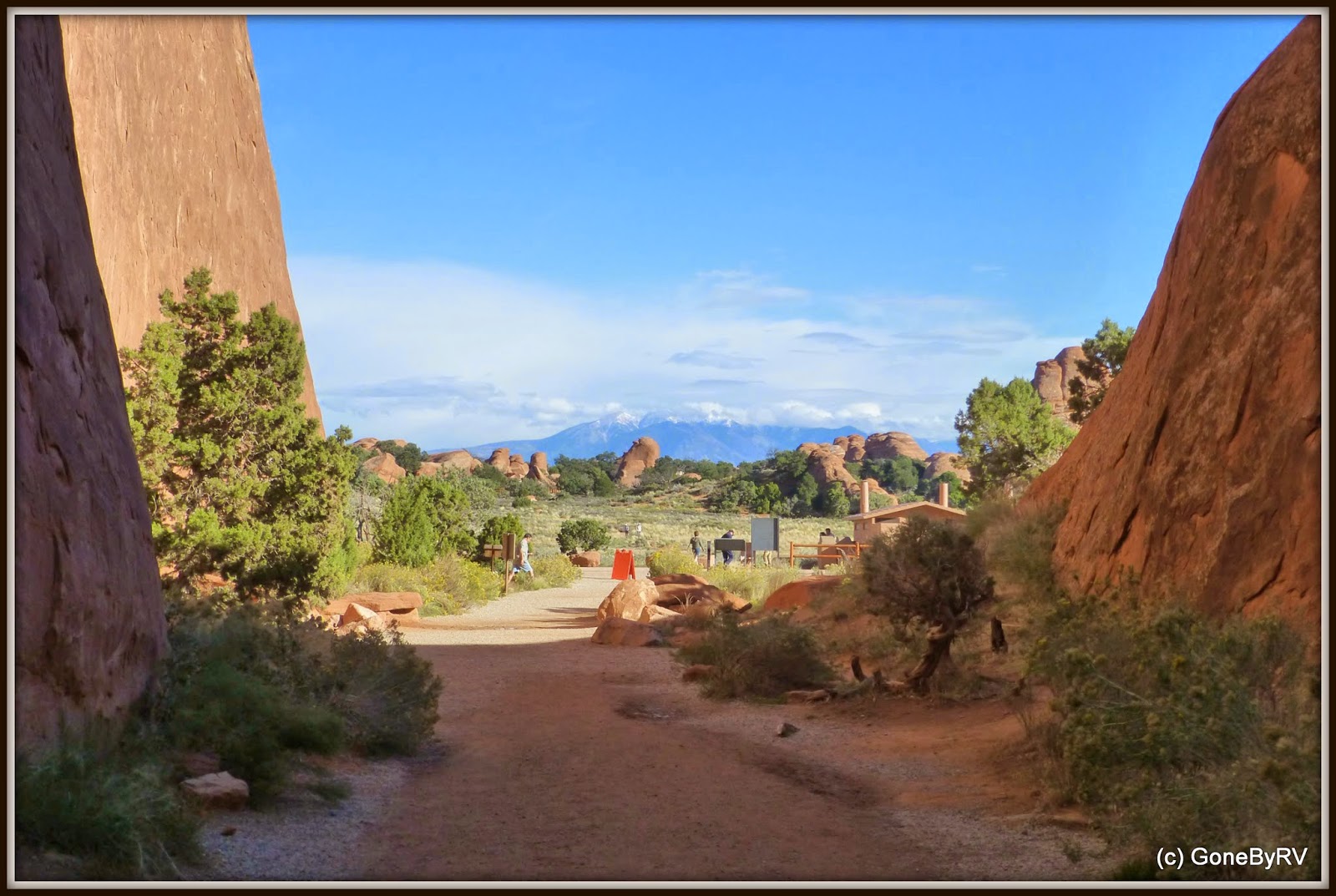 Finally, after 4 hours and 45 minutes we finished the Devil's Garden Trail.  This was a great hike!

This was our last day in Arches NP and in the Moab, UT area.  There is so much more that we wanted to see and do while in the area, but I guess we'll just have to make a return visit to fulfill those wants.