It's been almost 3 weeks since I last posted a blog.  During that time we've moved from our winter home in Casa Grande, AZ to our present location in Red Bay, AL.  I'll detail the cross country drive in another blog post, but today's blog is about a repair to our toilet.  If you don't have the same style of toilet or little interest in repair or maintenance jobs, please feel free to move on to the next blog at this time.

Ok, for those few of you who have continued thus far let me explain.  A few days ago we noticed that the toilet in our MH appeared to be leaking at the base.  I first suspected that the seal had failed and that we were having sewage not properly find its way south into our black tank. 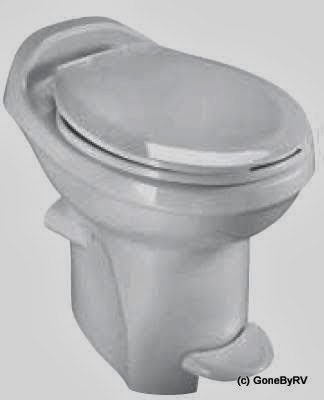 We have a Thetford Aqua Magic Style Plus toilet in this MH.  It has a china base with a foot pedal in front to activate the waste gate valve.  The model is #34421. 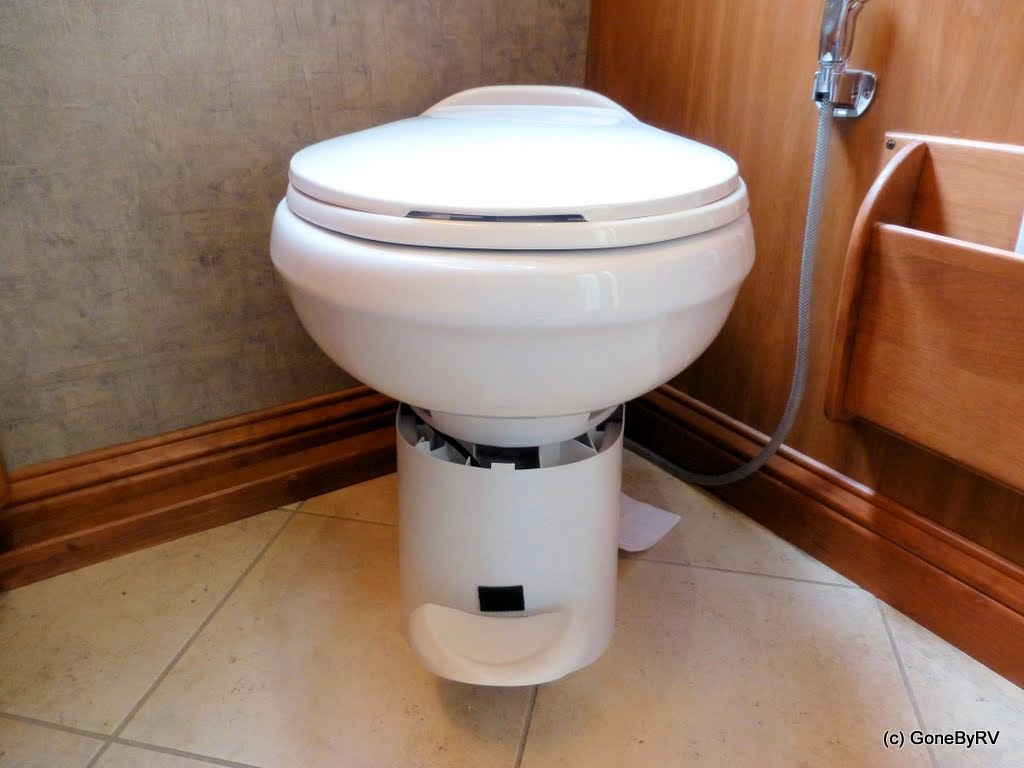 I began a closer examination of the source of the leak by removing the plastic shroud which surrounds the lower portion of the toilet. This picture shows the shroud already removed.

Looking to the rear of the toilet I discovered that when I depressed the foot pedal to open the waste gate slide inside the bowl, water was dripping from the part later identified as the water valve.  This leak was occurring every time the pedal was depressed. 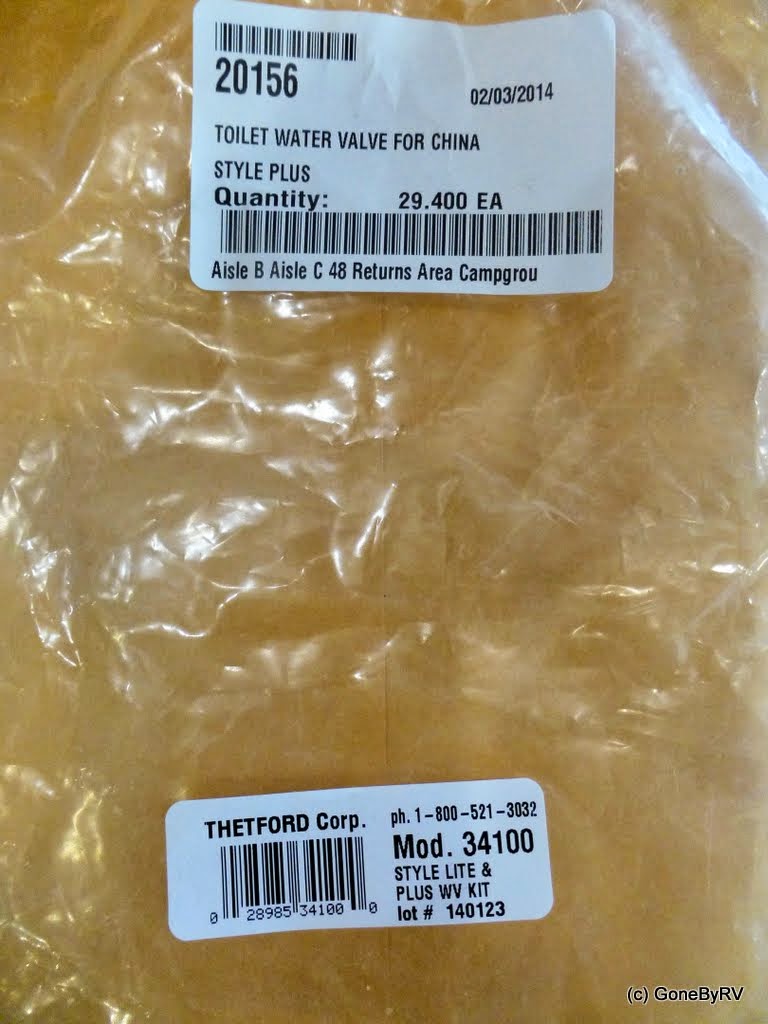 After looking at the parts diagram on Thetford's site I concluded that the problem must lie in the water valve assembly itself.  Fortunately for me, I'm currently in Red Bay, AL (the home of Tiffin Motorhomes) and their parts store is very good.  I walked over to the store and purchased the toilet water valve kit (which also includes a new rubber floor seal, new screws to replace the valve, and a new clamp to re-attach a hose).  The Thetford part number is #34100.

So now my dilemma was to decide whether to attempt to replace the valve with the toilet still in position or remove the toilet completely to gain better access.  After trying to see behind the toilet using a mirror and flashlight, the choice was simple.  That toilet was coming out! Actually, the removal of the toilet is very simple.  Shut off the water, unscrew the water line to the back of the toilet, and remove the nut on each side of the toilet base flange which holds it to the floor.  Here's what you're left with after the toilet has been removed.  The dirty rag to stuff into the waste line is VERY important! 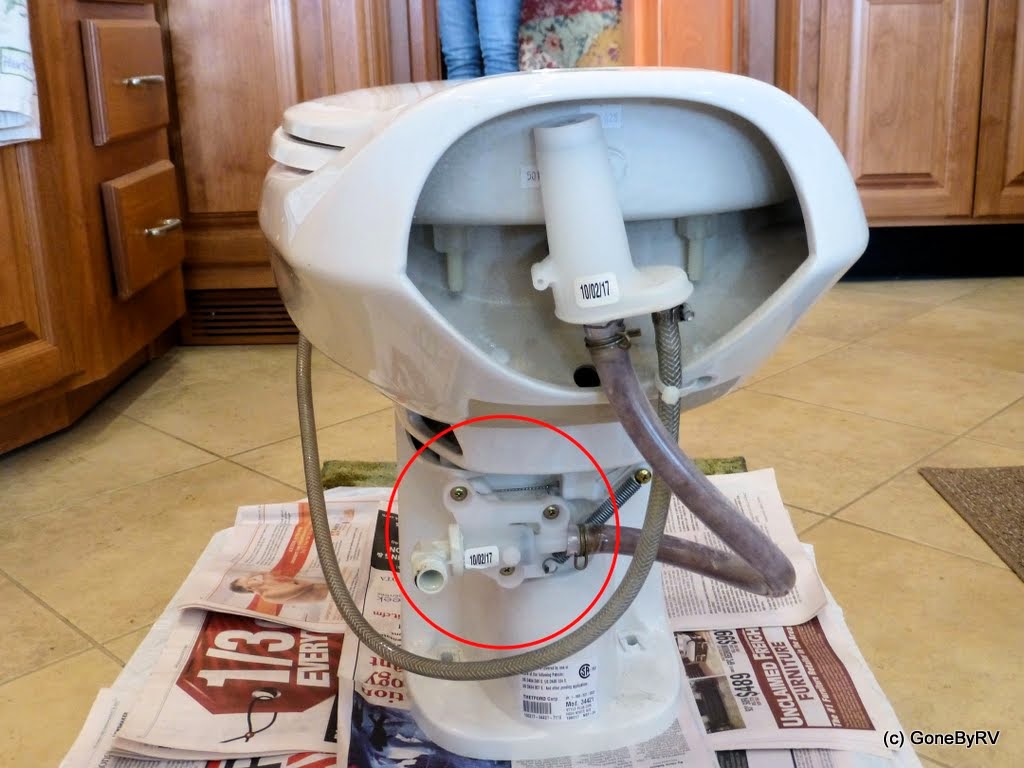 Now that the toilet has been re-located to an easier place to work the job will go much quicker.  Here's a better look at the water valve assembly. 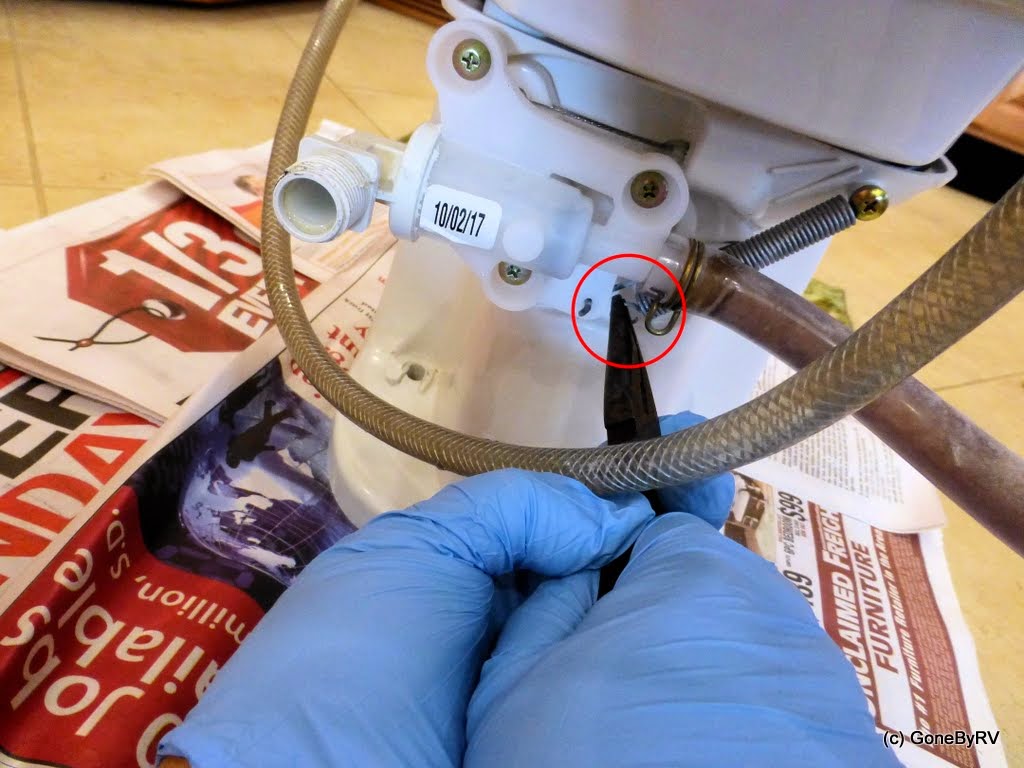 First, take a pair of pliers and remove the return spring from the metal rod on the lower portion of the assembly. Next remove the 3 screws holding the valve assembly in place. 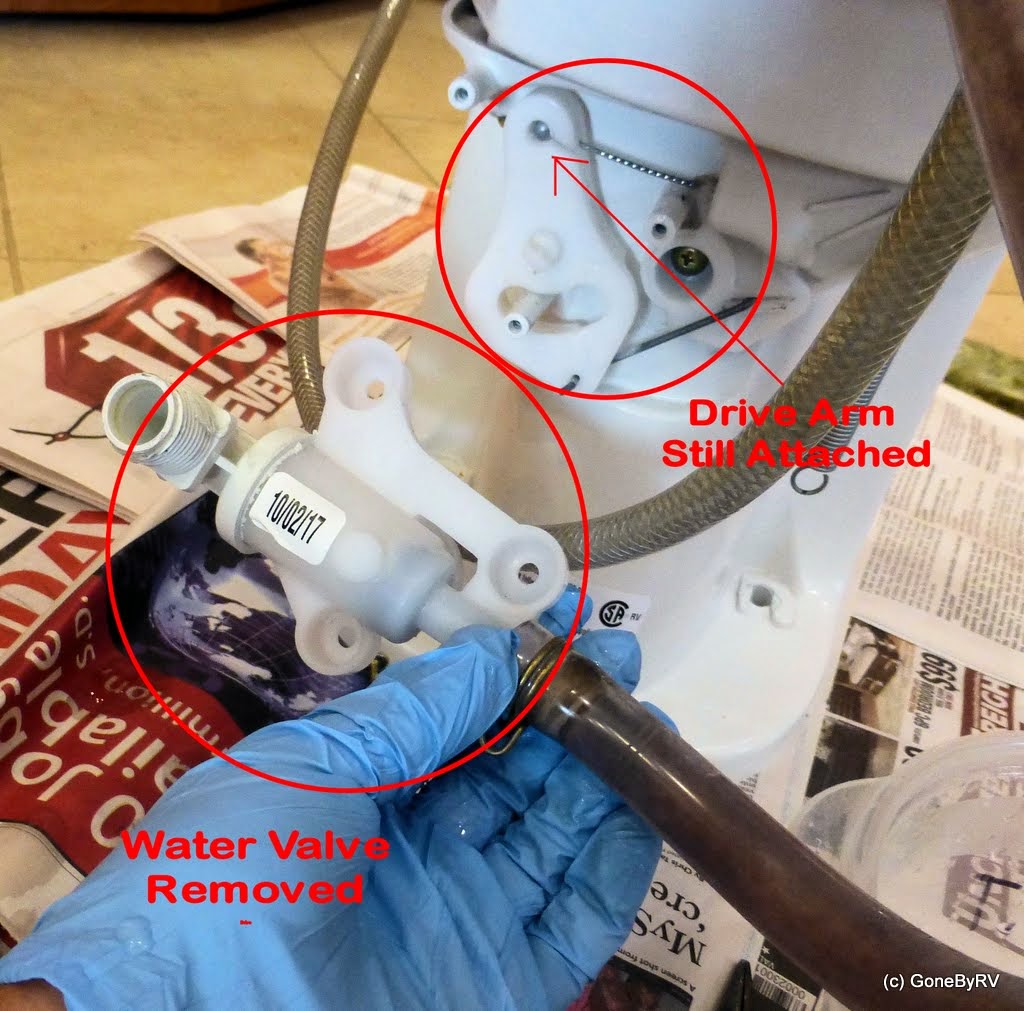 At this point the valve assembly can be pulled away from the rear of the toilet.

The drive arm is removed next by pulling the ball end of the cable (which attaches to the foot pedal) from the plastic slot and by rotating the drive arm to free it from the wire rod (shown near the bottom of the top circle). 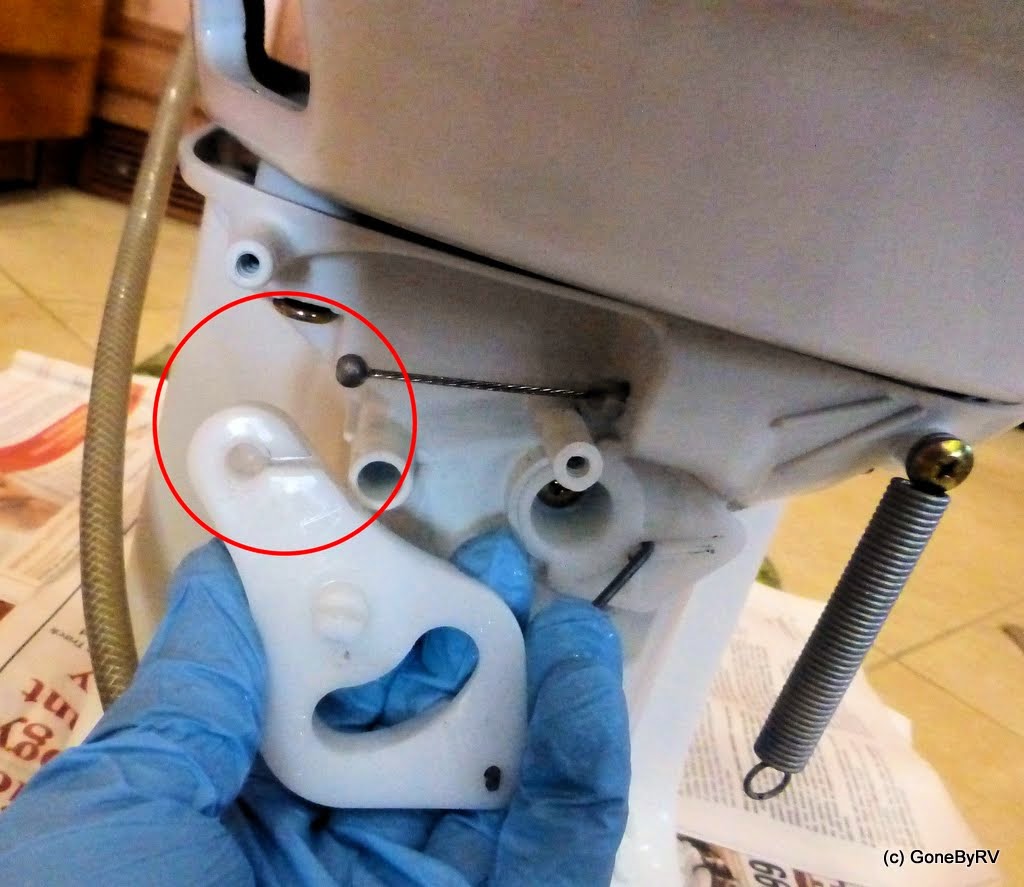 Here's what the freed drive arm looks like after performing the above two tasks.

Installation of the new water valve and drive arm assembly is literally the reverse of the above instructions.  The really nice thing here is that Thetford includes instructions in the package to do exactly what I have shown above.

All that's left to do is to replace the toilet over the existing toilet floor bolts, hook up the water inlet line, and check your work for leaks.

The entire job from start to finish took less than 1 hour and I'm happy to report that I had no leaks after the repair (the first attempt, no less).  This is certainly a job which can be done by almost any MH owner.  Not only will you save labor costs, but you'll certainly get a better understanding of how this type of toilet works. 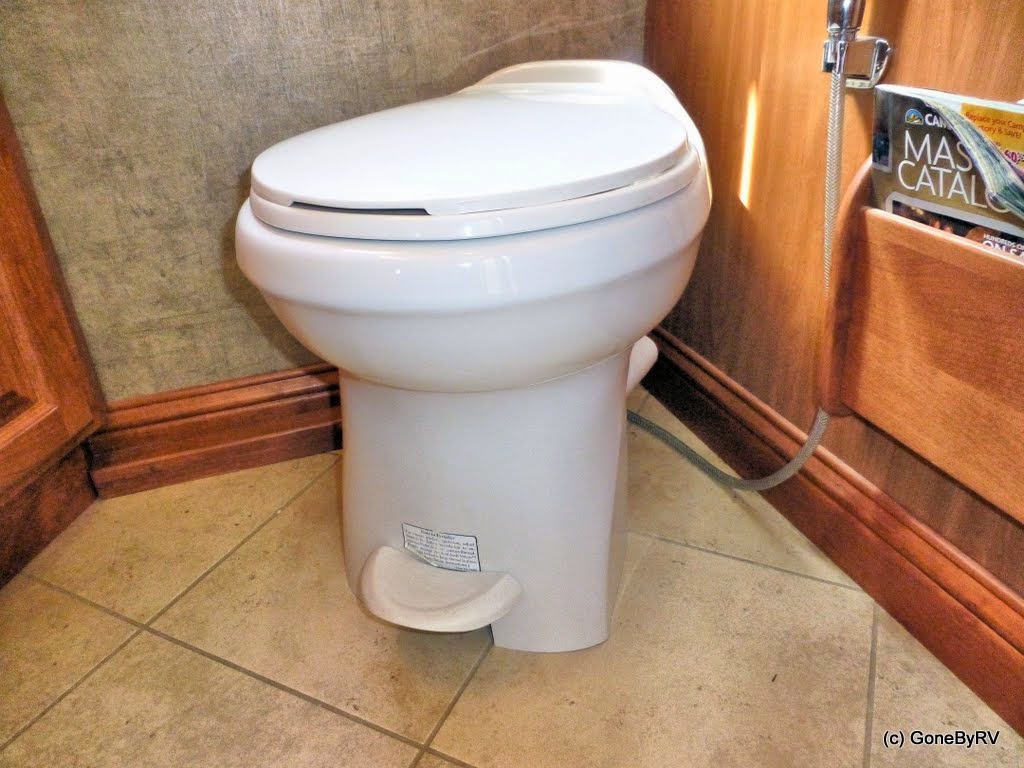