Comparing the Olympics and the Palm Creek Pickleball Tournament

Ok, so what do the Olympics and the Palm Creek Golf and RV Resort Pickleball In-House tournament have in common?  Well, not a whole lot, but I thought it was a catchy title to begin today's blog with.  Actually, both have winners and losers, and medals, and medal ceremonies. That's about the only similarities, however.

As readers of our blog already know, Karen and I first began our pickleballing "career" when we arrived at Palm Creek Golf and RV Resort back on November 1, 2013. It was an activity that we both really enjoy and hope to continue as we travel.  We took beginner's lessons a few days after arriving and purchased pickleball paddles a few days after that. So where am I going to all of this you might ask. 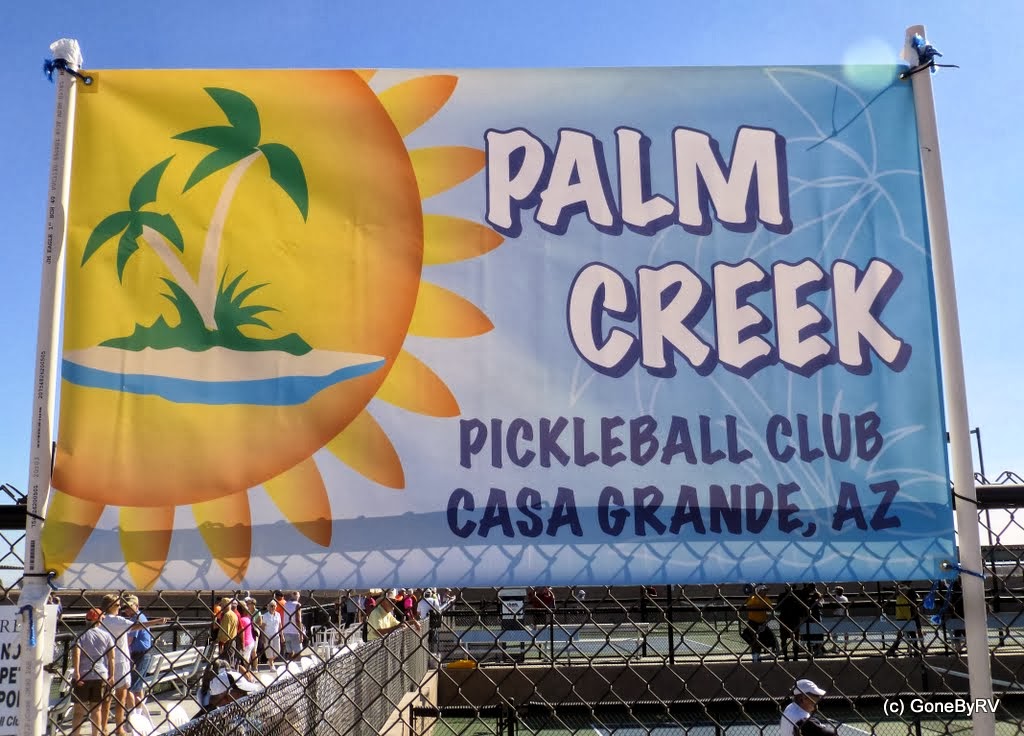 Pickleball is a very "big" activity at this resort and is enjoyed by many people.  The Palm Creek Pickleball Club has about 600 members, probably 400 active members.  Each February, the Club hosts an "in house" tournament in which only registered members of the resort (as of February 1st) are allowed to register and play. This year we had approximately 236 persons register to play. 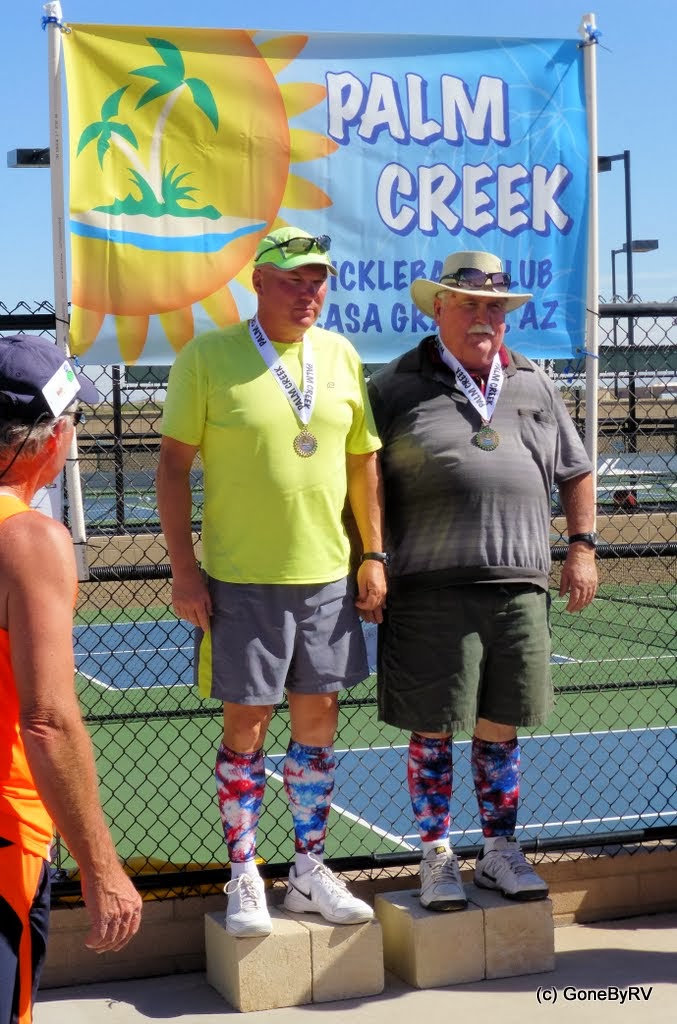 The tournament ran for three days beginning on Monday February 17.  I played on Monday and Jim and I were fortunate enough to win the Bronze Medal in our division.


Here's a look at the entire medal winning group for the Men's 3.0 Doubles Division.


On Tuesday I teamed up with Karen to play in the Mixed Doubles 3.0 competition.  There might be some truth to what others told us that husbands and wives generally do not play well together.  Well, we did pretty well.  We are still married and we managed to win the bronze medal in our division. Here's a picture of us on the medal stand (yes, the concrete blocks).  Aren't our matching uniforms cute? 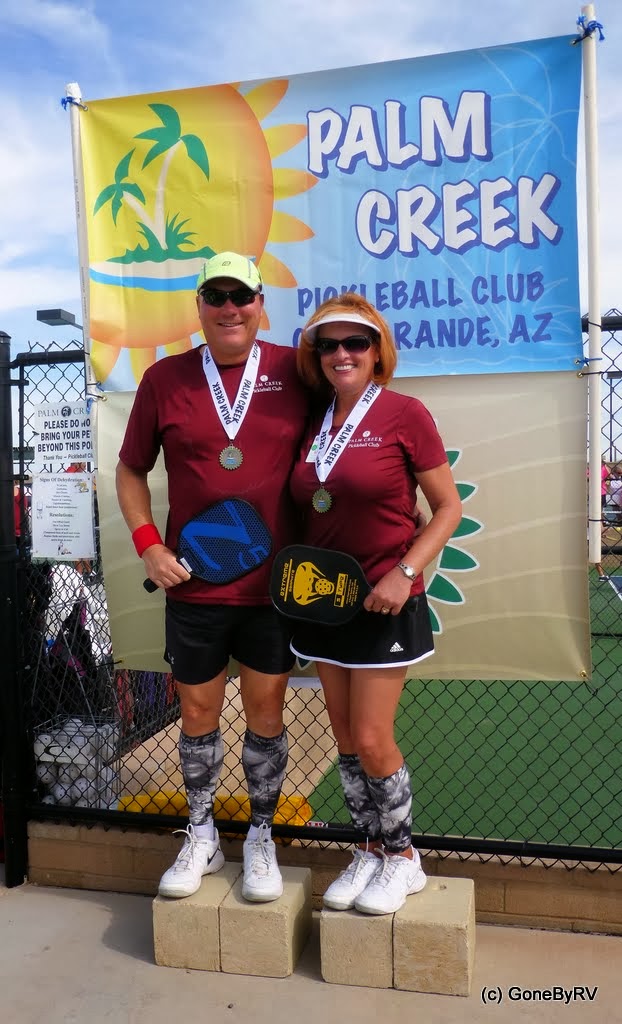 Here's a look at the entire group of medal winners for the Mixed 3.0 Division.

The final day of the competition had Karen teamed up with her partner Brenda Mills playing in the Women's Doubles 3.0 Division.  This was actually a fun day for me because I got to run around taking pictures without having to worry about playing. Both Karen and Brenda were new to pickleball at the beginning of the season.  They did EXTREMELY well as they won the Gold Medal for their division. Here's an early match with Brenda serving and Karen in the right court.

The last game of the game (for the Gold Medal) proved the toughest for this pair.  In a game to 15, the two of them were losing 14 to 7 and made a miraculous comeback to win 18 to 16 (must win by 2 points in tournament play). 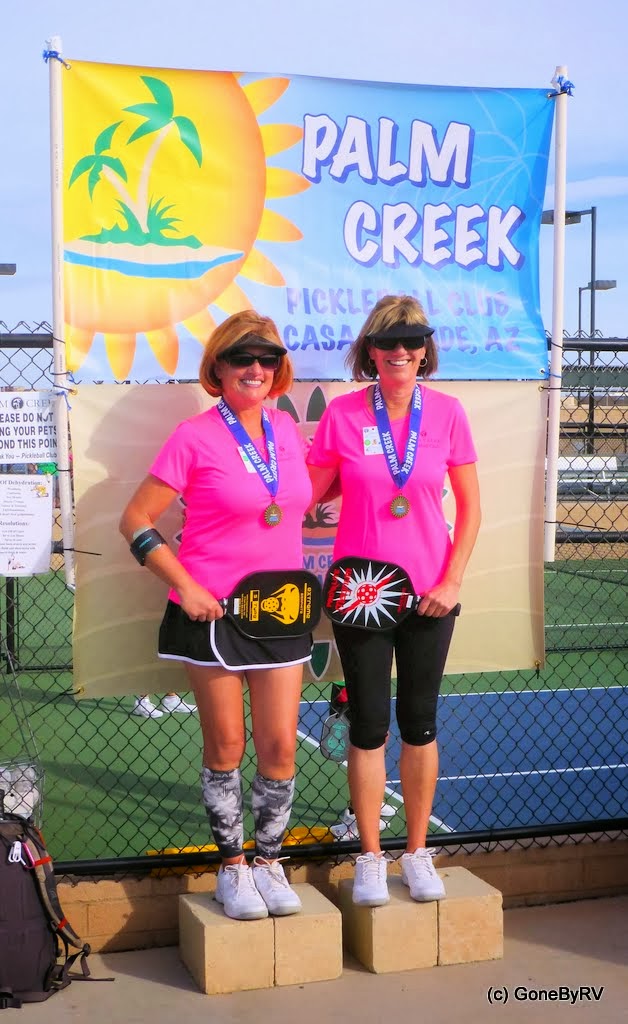 Here they are proudly standing on the medal platform.

The entire group with their medals in the Women's Doubles 3.0.

So after an unexpected three days of competing in our first pickleball tournament and doing surprisingly well, what do we do with all of those medals?

Why hang them in our windshield for everyone to see, of course. 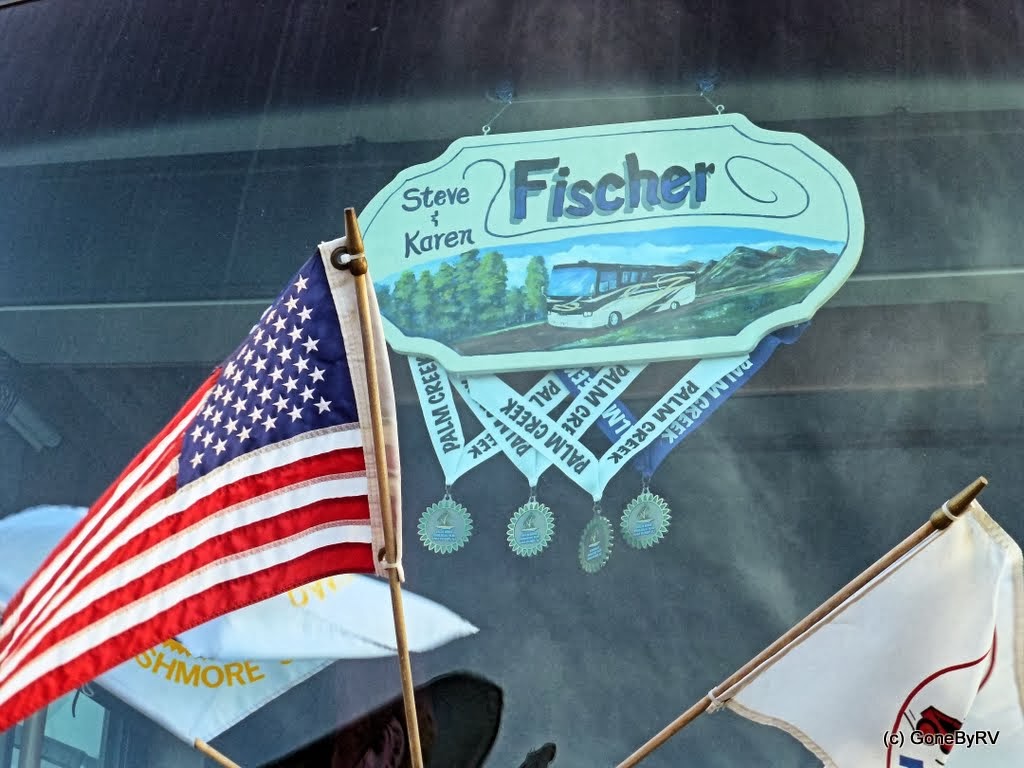