I know that it's been awhile since we've updated the blog, but we really haven't had a lot of "new and exciting" information to report.  We've just been settling in to our winter home and doing some domestic chores which still come with the fulltiming lifestyle.

Oh, yes, and playing more pickleball. Karen and I both attended a 2-day clinic given by Prim Carnot last week and learned a LOT more about the game and its nuances.

Then we had a somewhat unusual occurence.  It rained beginning Friday and lasted until Sunday afternoon. This part of AZ has had about 250% of its normal precipitation for the month of November. By Monday morning it was beautiful (weather-wise) again.

I try to play pickleball at least three times a week, so I went to the courts at 10:00 AM to play a round robin event of equally skilled players.  Everything was going well for the first hour. We were midway through a game, then it happened. I made a routine return of a ball and suddenly it felt like somewhat had hit me in the back of the right calf.  I really didn't think too much about it until I tried to take the next step.  Then *?&* as I grabbed my calf and sank to the court.

It turns out that I torn a calf muscle. Now, I've played sports my entire life and have never had this happen before.  Possibly something to do with older age?  Not sure, but I do know that there will be no more pickleball (or any strenuous activity for that matter) in my future for the coming weeks.  I went to the hospital shortly after getting back to the MH, but all they really did was give me a pain pill and wrapped and splinted my lower leg.  I can't even get in to see an orthopedic doctor until a week from today.

At least we're parked in one spot for awhile and not trying to travel around. 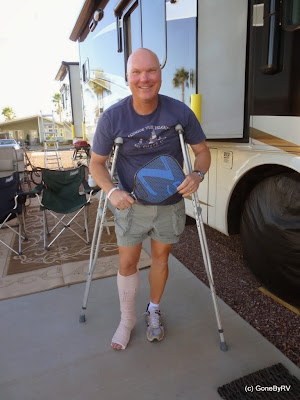 BTW, Happy Thanksgiving to everyone!

Thanks for stopping by to take a look!
Posted by Steve and Karen at 1:10 PM