"The Town Too Tough to Die"

We visited Tombstone on Tuesday and Wednesday and learned a lot about western history, and had a great time to boot!  For those not familiar with Tombstone, probably the most famous (or infamous) event occurred here on October 26, 1881.  That was the gunfight at the OK Corral. 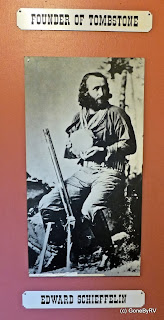 First, a bit of factual history about Tombstone.  The town was founded in 1877 by Ed Schieffelin, a prospector who found a rich vein of silver.  Because the Arizona Territory was such a harsh environment at that time, soldiers at nearby Camp Huachuca (later became Ft. Huachuca) told Schieffelin that the only thing he would find in this area was his own tombstone.  The name stuck with Schieffelin and the town became known as Tombstone.

In 1879 a town site was laid out in the area previously known as Goose Flats.  With word of the silver strike, people flocked to the region.  By the mid-1880's the population had grown to around 7500 people. (Keep in mind that only white males over the age of 21 were counted in the census of the day.)  Total population estimates range from 15,000 to 20,000 persons.  At one time, Tombstone was the fastest growing town between St. Louis and San Francisco.  That fact alone was a shocker to us. 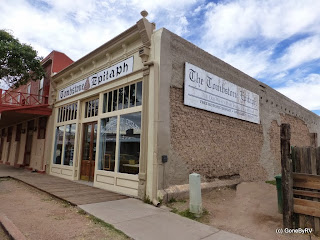 Tombstone was quite a town.  It had over 100 saloons during the mining days.  It had a huge "red light" district where prostitution was legal at that time (and taxed, I might add). It had one of the first swimming pools in the southwest which is still used today. The Tombstone Epitaph was the town's first newspaper and is still in publication today. 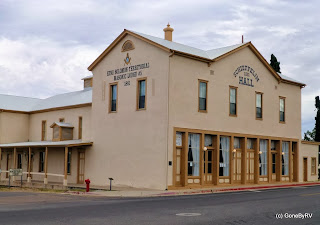 One of the measures of a town's "sophistication" in the early days was the presence of a theater.  Tombstone had two notable theaters. The first was Schieffelin Hall built in June, 1881 by Ed Schielffelin's brother Al.  This is where the respectable people in town attended the theater. At the time, it was the largest adobe structure in the southwest. 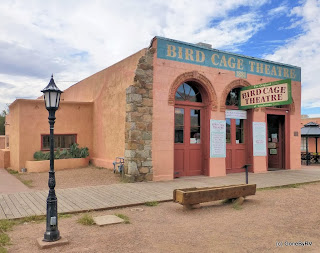 The other theater was the Bird Cage. It opened on December 25, 1881 and also contained a saloon, gambling hall, and brothel.  It was open 24 hours a day, 7 days a week.  The Bird Cage closed in 1889. It survived one of the fires which destroyed many of the wooden structures in Tombstone because of the adobe building material.  The unique thing about the Bird Cage is that it today is a very accurate look back into Tombstone's history because once it closed in 1889 nothing was disturbed prior to 1934 when new owners purchased the property and opened it as a tourist stop. 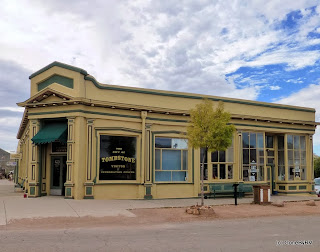 Today much of Tombstone has been re-built (because of the two fires in 1881 and 1882) to portray the Tombstone of the era.  A good place to get oriented is the building which today houses the Visitor Center. This building was originally the site of a bank. 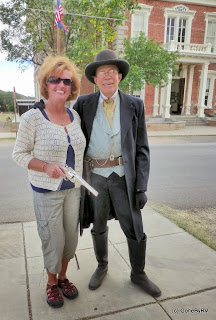 After picking up a few brochures we decided to take an "overview" tour on the trolley.  This tour was pretty informative, but we learned by the end of our second day that "true history" is sometimes a bit slanted depending upon who is giving the talk.  If you really would like to learn as much as possible in a short period of time, we would advise you to take one of Dr. Jay's Tombstone Walking Tours.  We took the 2-hour tour and he was excellent.  This is the "slow" time in Tombstone (before all of the snowbirds start to arrive for the winter) and we were the only two taking the tour on Tuesday afternoon. 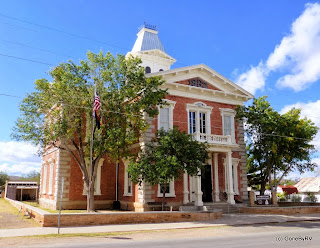 One of the best museums in Tombstone is located in the old Cochise County Courthouse.  The courthouse was built in 1882 at a cost of approximately $45,000.  It remained the courthouse until 1929 when the county seat was moved to Bisbee, a significant copper mining town. Today, the former Courthouse is administered by the Arizona State Parks. 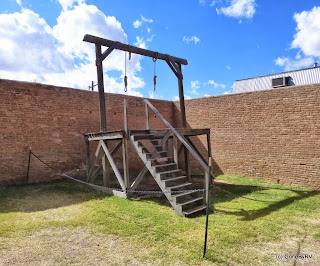 Seven people were hanged during the Courthouse's tenure in town. These are the reconstructed gallows at the rear of the Courthouse. 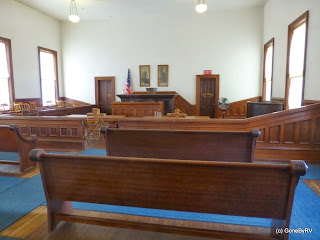 Here's a look at the court room located upstairs in the Courthouse. 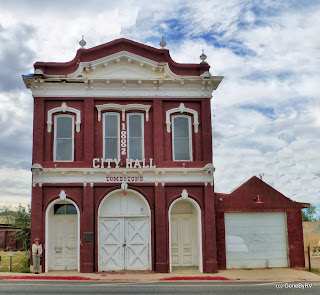 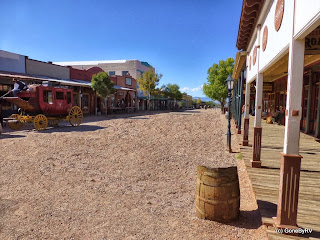 One street over is Allen Street. This is the area closed to vehicular traffic and attempts to recreate the "feeling" of the 1880s. 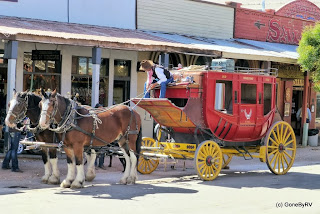 This is also the street to take a tour of the town in a stagecoach. 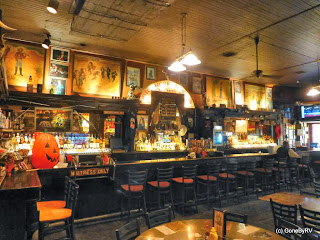 We ate lunch on Wednesday at Big Nose Kate's Saloon. Big Nose Kate was the "girlfriend" of Doc Holliday. This place was pretty interesting and you could really get a sense of what it must have been like on a bustling day back in the Old West.  There is live music and the food is really pretty good. The bar is as is would have been back in the 1880's with the addition, however, of bar stools for today's population. 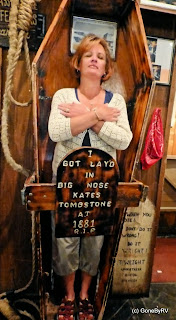 Lots of fun things to see in Big Nose Kate's.

Of course, a trip to Tombstone wouldn't be complete without learning about the shootout at the OK Corral. Let me just say that Hollywood movies have greatly distorted the factual account of the shootout. The shootout took place in the alley off of Fremont Street leading into the area of the OK Corral.  It was a gunfight between Wyatt, Morgan, and Virgil Earp and Doc Holliday against Billy and Ike Clanton and Frank and Tom McLaury. The fight lasted 30 seconds and between 25-30 bullets were fired.  In the end, Billy Clanton and Frank and Tom McLaury lie dead in the street. Morgan and Virgil Earp were wounded and Doc Holliday received a minor injury.  Only Wyatt Earp was uninjured. 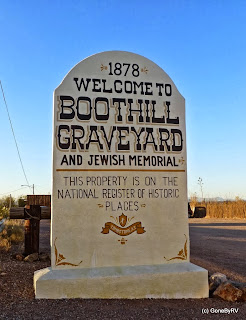 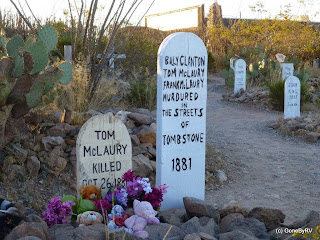 Some of the headstones are amusing, some sad.  Many graves are only marked as "unknown". 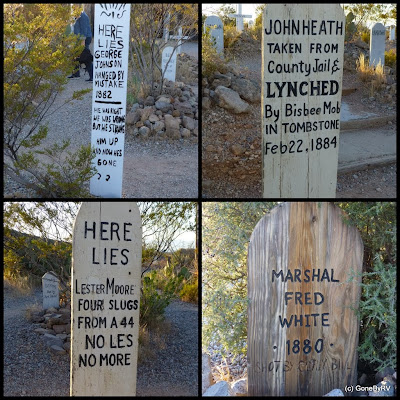 The visit to Tombstone was very enjoyable.  Let me warn in advance that the "touristy" attractions can become expensive.  We did a few things, but left several others for another visit.  For those interested, here are the current ticket prices as of this blog writing.  (Each ticket price is listed as per person.)  Listed in order of best value for the money.    (MY OPINION ONLY HERE.)