With only one day to explore the area before leaving for Red Bay, AL on Tuesday, we knew any tour of Montgomery, AL would be incomplete and only scratch the surface.  Still, this is the part we enjoy most about FTing so far.  That is, the ability to explore  new areas and more importantly to associate historical events which we had previously only heard about or read about into living, tangible pieces of our lives.

We had to decide how to learn the most about Montgomery for a possible return visit later.  The Montgomery, AL visitor's center seemed the logical beginning point.  The visitor center is located at 300 Water Street along the Alabama River in the old Union Station train depot.

This was a great place for an overview of the city.  We watched a short video detailing the historical importance of the city describing its' role in the Civil War, Civil Rights Movement, and the growth of the city thru those periods in history. The woman at the information counter was a wealth of information about places to eat and what to see in a short period of time.  For a general layout of the attractions we chose to take a trolley tour of the city.  The tour only lasts about an hour, but during a normal day visitors are able to get off and re-board the trolley at several points throughout the city.  I say "normal" day because today was President's Day and many of the attractions were closed.  The cost is only $3 per person, or $2 for seniors. 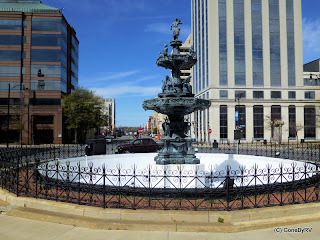 After returning from the Trolley Tour we decided to walk around the city. The first area visited was Court Square Fountain on Dexter Street.  According to our trolley guide, before the fountain was erected the basin was known as the "pit", the area where slaves were held prior to being auctioned along with animals and other goods. 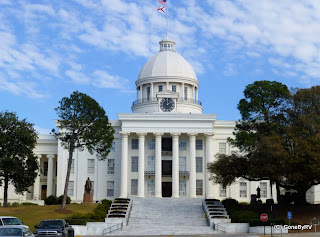 A walk straight up Dexter Street ends at the state capitol of Alabama.  Because today was a holiday, traffic was very light.  I was able to stand in the middle of the street to take this photo of the front of the capitol. 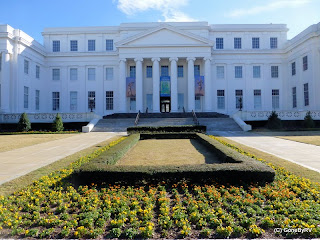 The Department of Archives and History was also closed for the holiday, but is an area we will definitely explore if we are able to return to the area. 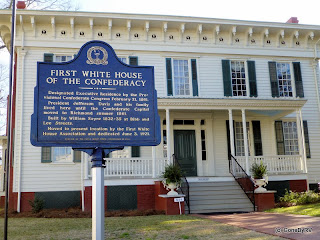 Although I learned quite a few new things today, one stood out somewhat because I lived in Virginia all of my life and never knew that the "White House of the Confederacy" was ever located anywhere other than in Richmond, VA.  I found out today that it actually was located in Montgomery, AL from February 21, 1861 until the summer of 1861 when it was moved to Richmond, VA.

Montgomery is rich in history of the Civil Rights Movement as well, but many of these areas were closed today due to the holiday.  These, and many other attractions, will be on our list of things to see when we return to the area.

Thanks for stopping by!
Posted by Steve and Karen at 12:48 AM