Day 2 at the Tiffin Service Center

Day 2 of our service appointment has arrived and I will admit that although repairs are going slowly, things are progressing.

Drove up to Bay #3 again today at 6:50 AM. To our surprise the doors were opened immediately (before 7). Our tech immediately went to work on completing the last panel which was to be secured to the bottom of  our passenger side slideout.  Project completed fully at 10:00 AM.

Because techs have to order parts needed for repairs, then wait for their arrival by the parts guys, he started work next on replacing a crushed drain hose which attaches to the kitchen sink and goes to the grey water tank.  Basically, the cause of the problem was that Tiffin uses 1 1/4 inch spa hosing to make this connection and all would be well with that except that some installs had the hose wire tied very tightly to the plumbing lines, gas hose, and many electrical cables.  As the slideout extends and retracts this "bundle" moves in and out with the slide.  Unfortunately, the tightly gathered bundle causes the drain hose to kink which ultimately leads to a leaking hose. 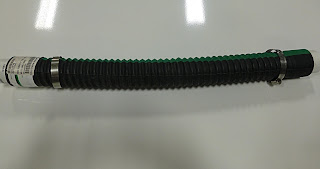 The "fix" for this is to cut out a section of the spa hose and insert pvc couplings on each end of the remaining hose, then use heavy duty flexible radiator hose clamped to these couplers. Project completed in short order. 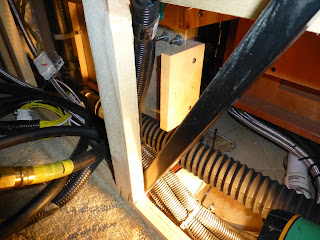 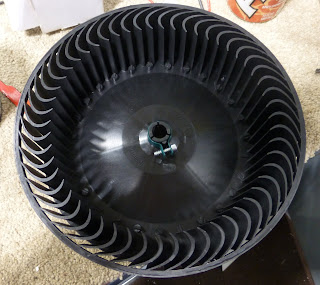 On to the next project.  We have 3 AC/Heat Pump units atop our rig and the middle one has been making "unusual noises" when it shuts down.  The tech had seen this before and believed it to be a "squirrel cage" which had slipped down on its' shaft.  Again, order placed with the parts department. By the time the part arrived and everything was moved to the roof to effect the repair it was time for lunch.

After lunch the tech replaced the squirrel cage on the AC/Heat Pump unit and went to work on a problem we've been having with our Over-the-Air (OTA) television antenna.  The antenna is contained in a circular housing and stands above the roof on brackets.  In the past, as the antenna was rotated by a remote inside the rig, a motor sound could be heard indicating that the antenna was turning.  For about the last month we have heard nothing.  A parts order was submitted to HHH Electronics who is located beside  the service center here at Red Bay.  I honestly have no idea what is wrong at this point.


Our large slide on the driver's side doesn't seem to be moving in and out as smoothly as it has in the past.  The tech called in a supervisor to take a look at this one.  The supervisor acknowledged that the motor on the slide seemed to be having difficulty. (We hope that this means that the item will be covered under warranty, or at least at a reduced repair cost.)  An order for the motor was placed as well as an order for a replacement slideout rubber seal on the same slideout.  We've known for a few months that the seal along the top of this slideout had come loose and was in need of replacement. 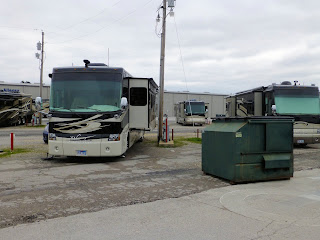 With that, the end of the 2nd day has arrived.  The parade of Tiffin motorhomes back out of the service area and return to their sites for another night.  We have decided to move over from the self-service campground nearby to the campground here at the service center.  We are now located on Site #33.  Although we had no choice in sites (because the campground is full as of 12:30 PM on Tuesday), just look at the surrounding amenities   Dumpster in front and electric pole to the side! Hey, what can tomorrow bring?

Thanks for stopping by to visit!
Posted by Steve and Karen at 7:33 PM