Finally on the Move Again

From near Apache Junction, AZ

.
As I look back at our last blog entry dated in October, 2018, it's been a very long time since I wrote something. Sorry, but I'm not one to write about "day to day" stuff when we're sitting still in one location for such a long time.

Well, all of that is again about to change. We had originally thought about leaving our winter home in Casa Grande, AZ in mid to late April. A bucket list opportunity presented itself a few months back when we found out that the Rolling Stones were due to be making a stop in Phoenix, AZ on May 7, 2019. I have always wanted to see them before they no longer tour, so we purchased tickets back in December of 2018 for the May concert.

Then, in March of 2019, it was announced that Mick Jagger would be undergoing heart valve surgery and the concert was being postponed.

Well, we decided that we were leaving on May 15th, whether or not they published the new tour dates.  Fortunately, the new dates were announced yesterday and our tickets will be good for the Phoenix concert on August 26, 2019.  Yes, you heard that right, AUGUST, in Arizona. The averages temperature should be about 105 degrees.

The short version of all of this is that because we are fulltimers, we'll make it work.  Probably return to the Casa Grande, AZ for a couple of days to attend the concert, then head up to cooler temps and elevations for the remainder of the summer.

We pulled out of Palm Creek on Wednesday (5/15) and drove a whopping 75 miles northeast to Lost Dutchman State Park. We did this for two reasons: First, we wanted to make certain that our rig was mechanically working well again, and second we just wanted to visit this park and area. We are staying in the water/electric section. 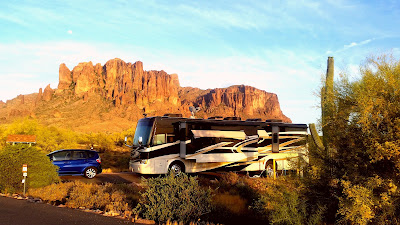 The sites are all paved with very nice utilities.  I chose a site from looking at Google Earth which afforded us a nice view of the Superstition Mountains. 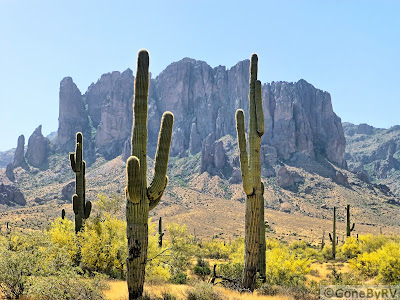 Saguaro cactus are plentiful in this area. Judging from their size, many of these specimens are quite old.  The Saguaro only grows at 1.5 inches per year in their early years. 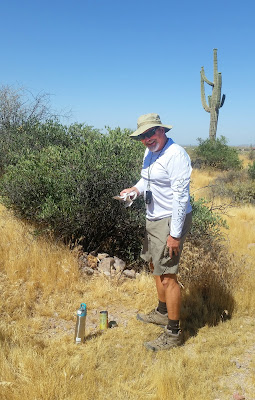 This afternoon we took a short hike along some of the many trails in the park.  This trail also happened to have a Geocache located along a section in the Tonto National Forest, so of course we had to locate it. 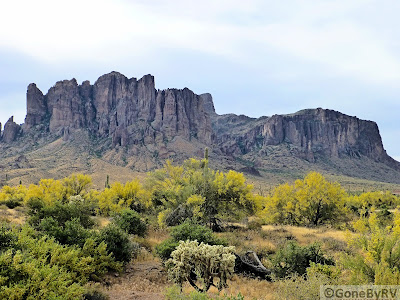 Later on this evening, the Park is sponsoring a "full moon" hike along the base of the Superstition Mountain behind the campground.  Not too sure if we'll have any nice pictures to share, but here's a look at the ridge in the daylight.


Yesterday was a nice day for a drive, so we hopped in the Fit and headed up Rt. 88 toward Canyon Lake and Tortilla Flat. The road is two lanes and certainly not intended for long RVs. I seem to recall a sign prohibiting anything over 40 feet in length. 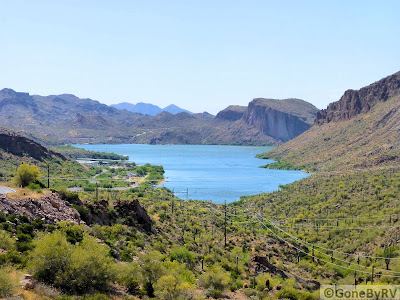 The first attraction was Canyon Lake. A very pretty area in the middle of a hostile desert and mountain area. Traffic on the lake was slow now, but they have a large marina and I'm sure that it is a popular spot during good weather days.

The next stop was Tortilla Flat, AZ. According to Wikipedia "It is the last surviving stagecoach stop along the Apache Trail. According to the Gross Management Department of Arizona's main U.S. Post Office in Phoenix, Tortilla Flat is presumed to be Arizona's smallest official "community" having a U.S. Post Office and voter's precinct. The town has a population of 6." 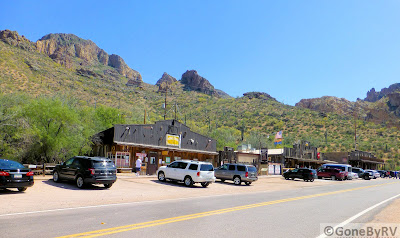 Here's a picture of the entire community of Tortilla Flat. 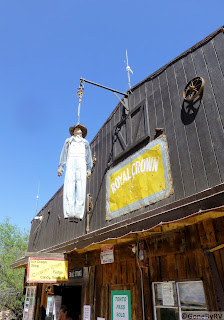 I guess this gentleman must have failed to pay what was owed to the general store's owner. 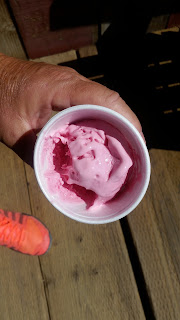 One of the hyped "tourist attractions" in the shops was the locally made pickly pear gelato.  Of course, we felt obligated to give it a try. Probably the best prickly pear-flavored gelato I've ever had. (Can you sense the sarcasm here?) It was ok, but I probably wouldn't order it a second time.


That's about it for the start of our summer adventures. We'll be pulling up the jacks and begin a slow trek east beginning on Saturday.  The plans for this summer are VERY loose at this point.