After leaving Anacortes, WA we moved a bit south of Seattle to Graham, WA. The campgrounds in this area are a bit few and far between, but we selected Ranier View RV Park because we had plans to meet up with our good friends Bill and Debi. They live a short distance from the park and the campground would facilitate a somewhat central location for us to meet up.  Little did we know in advance just how busy the coming week was going to be. Bill and Debi were again GREAT hosts and "tour guides" to show us around their home state.

After a short day of rest, Bill was knocking on our door the next morning. It was time for pickleball. They are definitely dedicated players as the drive to the Lakewood Community Center is approximately 45 minutes each way. We played several mornings during our stay of a week in Graham. Thanks again Bill and Debi for picking us up each morning! 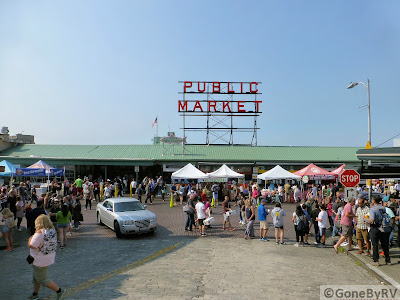 Let the sightseeing begin! On Saturday, August 18th we were picked up by Bill and Debi and decided to take the light rail into the center of Seattle. We had heard how bad the traffic in Seattle was, so public transportation worked out well. We headed to the Pike Place Market in the heart of the city. Think HUGE market place with a large amount of vendors (and crowds because it was a Saturday). 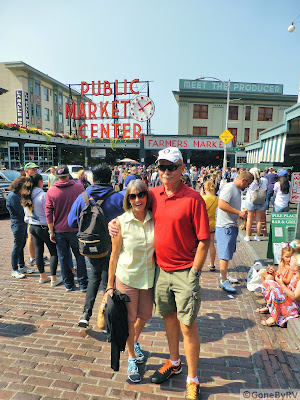 Here's a picture of our wonderful tour guides before we ventured inside.

One of the attractions at the market is the "throwing of the fish" by one of the fresh seafood vendors. Crowds gather waiting for someone to purchase a fresh catch, then the tossing begins. Here is a very short video of this event.

After being moved through the market by the ebbing and flowing of the crowds, we wandered down to the waterfront. The Seattle Aquarium is nearby and the Seattle Great Wheel is just south of that location. 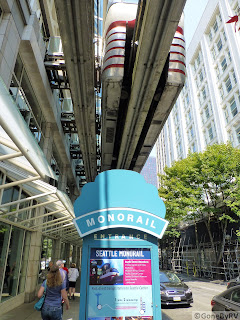 We walked a few blocks north to the Westlake Center to ride the Seattle Monorail to the City Center. The monorail was built for the 1962 Seattle World's Fair. 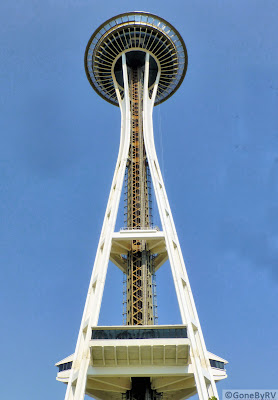 The two attractions we were interested in visiting were the Seattle Space Needle and the nearby Chihuly Garden and Glass exhibit. The Space Needle is a Seattle icon and has recently undergone some renovations. 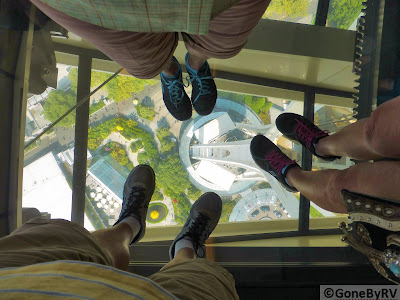 The Space Needle was also built for the 1962 World's Fair and the top floor is 518 feet above the ground. The 360 degree views were excellent, but the area was still somewhat hazy from all of the recent fires in the area. 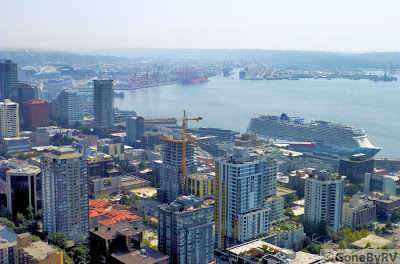 Looking slightly northeast, there was a nice view of the port area. We were lucky, the cruise ships were few today. 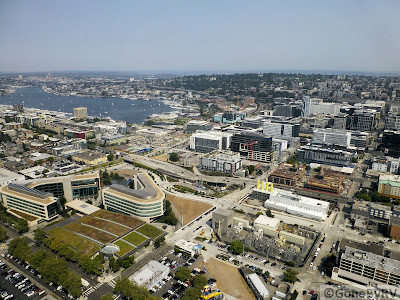 Just north and east is the Bill and Melinda Gates Foundation Discovery Center. (The double V-shaped buildings to the left side). 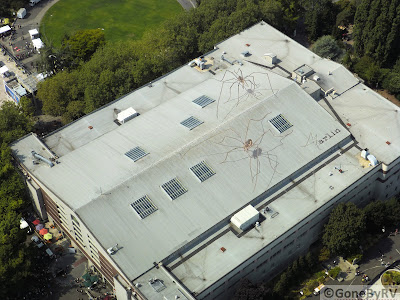 Near the base of the Space Needle and terminal station for the Monorail is the Seattle Center Armory. A great place for a quick bite. From above, these two giant spiders were thought to be metal sculptures. I learned later that they are actually large murals painted on the surface of the roof by a talented artist named Marlin Peterson.


The final stop on our tour for the day was at the Chihuly Garden and Glass exhibit. Rather than detail the work of Dale Chihuly here (mainly because I'm not familiar with him), just click on this link for more information. 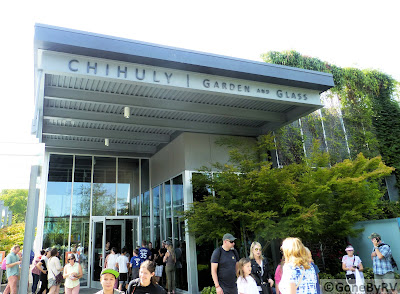 I will readily admit that I'm not an "artsy" kind of guy, and especially when it comes to wandering through galleries. In this instance, however, I was wrong. Mr. Chihuly's work is amazing.

The color used in his creations are beautiful. The Persian Series lined an entire room and was displayed as a ceiling of color. 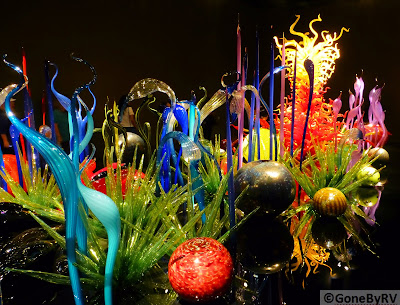 The entire gallery is dimly lit to enhance the beautiful colors and shapes of the glasswork. 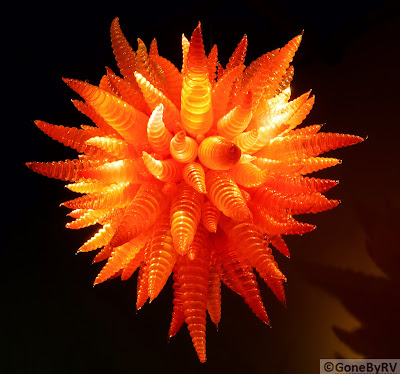 This is from his Chandelier Series.

Because I honestly can't recall the names of these works, I'll just show a few pictures instead. 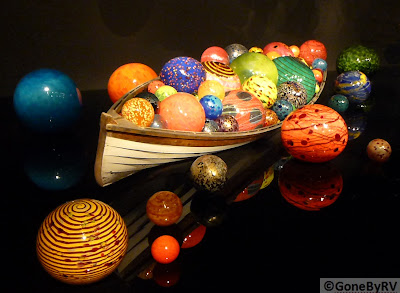 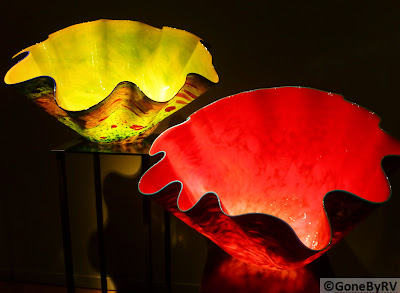 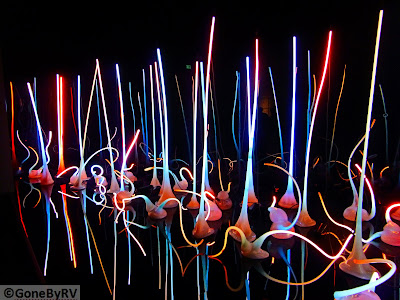 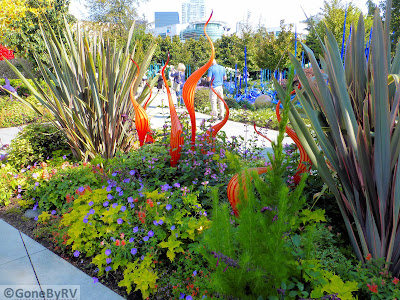 After visiting the displays inside, there was an outside garden area where his works are woven into the beautiful gardens surrounding the center. 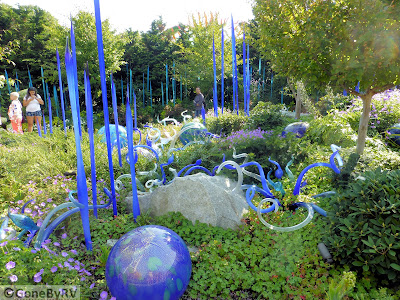 I love the placement of his creations among the living plants. 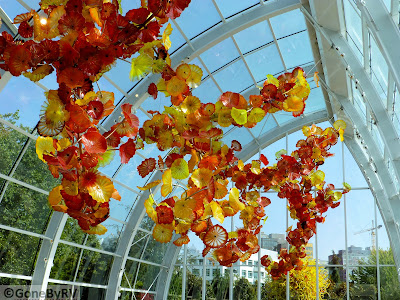 By this time, everyone is getting a bit tired and ready to head back to the light rail station for our ride home. Again, the public transportation is a great choice for anyone wishing to visit "downtown" Seattle.


The next blog will continue our exploration of the Seattle and Mt. Ranier areas of the state.


As always, thanks for dropping by to take a look!