Posted near Hurricane, UT
(Click on Pics to Enlarge)

Click Below to View More Pictures Not Contained in Today's Blog:

Our time in the Page, AZ area is coming to an end.  We have thoroughly enjoyed exploring this part of AZ and certainly would not hesitate to make a return. That's very encouraging because before coming here we thought that perhaps a week would be too long. We were wrong!

Today (4/29) we decided to take a drive south along US89 and make it a "3-fer" of places to visit. We'd read about the Navajo Bridge, the Lonely Dell Ranch, and the Lees Ferry area in our information guide for the Glen Canyon National Recreation Area. All of these attractions are located close to each other, so off we went.

We first arrived at Navajo Bridge (US89-A) at Marble Canyon, AZ. It was approximately 45 miles from our campground. This was an important aid to transportation when it was completed in 1928. Prior to that, a 600 mile journey was required to be able to cross the Colorado River between Utah and Arizona.

The bridge had a length of 834 feet and had an arch of 616 feet. At the time, it was the highest steel arch bridge in the world. One of the problems for modern transportation, however, was that the bridge was only 18 feet wide.

In 1995, a new span was completed. It looks similar to the original span, but is both wider and able to carry more weight. The original span is now only used for pedestrian traffic.

These bridges represent 1 of only 7 land crossings over the Colorado River in 750 miles. There are information centers today on both sides of the river to stop and take a leisurely look at this engineering accomplishment.  In this photo, the new span is on the left. 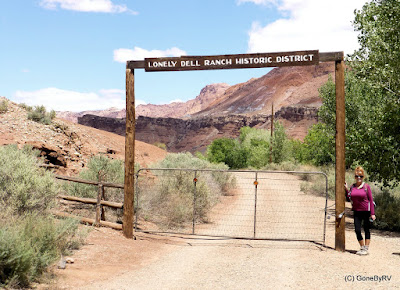 A few miles down the road and we arrived at Lonely Dell Ranch. This ranch was created in 1872 by Mormon John D. Lee. Lee was the ferryman who was sent by Brigham Young to create a river-crossing of the Colorado to aid in western expansion by Mormon pioneers. 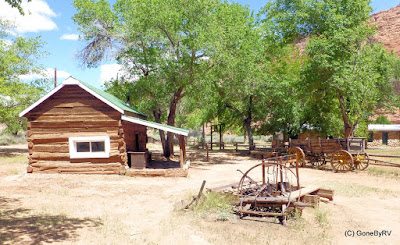 Several families have called the ranch home throughout the years. Jeremiah Johnson lived on the ranch and this cabin is thought to be circa 1925. It was later used as a guest residence by later owners of the ranch.

This is how the ranch looks today. The largest building on the right is the most modern and was constructed in the mid-1930s. The name of the ranch was changed to the Paradise Canyon Ranch. Electricity was finally added in 1965. The ranch was added to the National Registry of Historic Places in 1997. 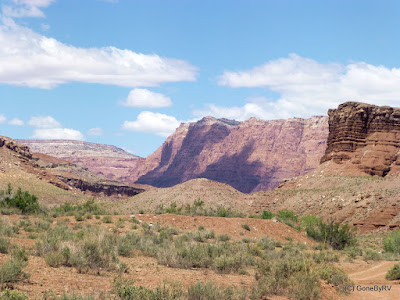 It's hard to imagine how remote this ranch was in this area. For that reason, the owners constructed orchards to become more self reliant. Water was initially drawn from the Paria River. 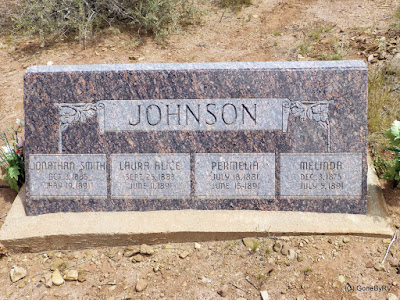 A short distance from the ranch complex was the cemetery containing the remains of different families and travelers throughout the years. A sad note here was that 4 of the Johnson's children died in 1891 within a seven week period. After contacting diphtheria from two passing families in May, 1891, six of the Johnson children contracted the disease and four eventually died of it. (Note: The pictured headstone has been placed in recent times, although the original headstones are still visible on each side.) 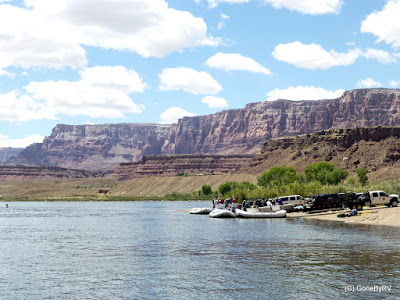 Our final destination for the day was the Lees Ferry Crossing. This area and outbuildings can be accessed by a short and easy Riverwalk Trail.  As noted earlier, John D. Lee was the first ferryman. The ferry began in 1871. This was at the site of an area now used as a launching ramp for both commercial rafting companies and by private individuals. 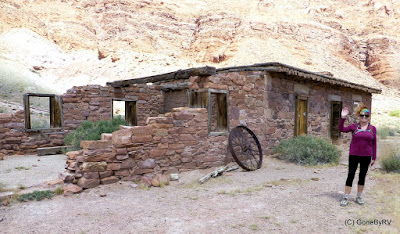 By 1874 tensions had risen between the Navajos and the increasing Mormon population and Lee built a small fort near the ferry crossing. As it turned out, the fort was not needed as a defense, but was turned into a trading post.  Several of the ferryman's families occupied the fort in later years. 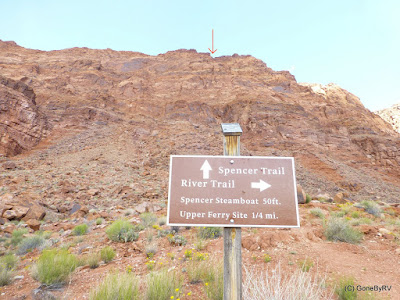 We continued along the river to see the location of the last ferry. Along the way, I observed a trail sign showing the start of Spencer's Trail. This trail was a mule trail used by Charles H. Spencer (who operated a gold mining operation along the river) to haul coal from nearby Warm Creek to the trail in 1910.  In the picture, the red arrow at the top of the cliff is the terminus for the trail.  The trail climbs 1505 feet in 2.5 miles. For some reason, Karen was not interested in hiking this one. 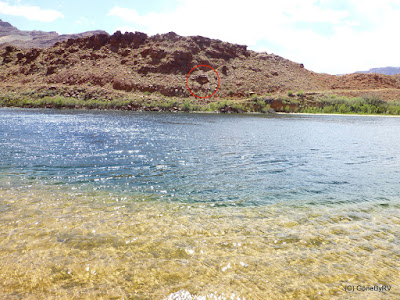 A short hike north and we arrived at the location of the final Lees Ferry crossing site. By this time, the last ferryman for the crossing was in place. James Emett had replaced Warren Johnson in 1896 and persuaded the Mormon Church leaders to replace the original ferry with a cable crossing. The new improvements were completed and ready for use by March of 1899.  This view shows the area of the crossing. 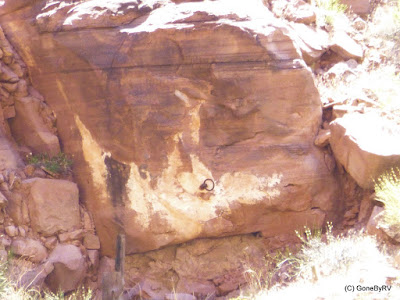 The previous red circle indicates where the attachment point is still visible today. This is a close-up of that ring.

There were several accidents while making the crossings throughout the years. The final accident occurred on June 7, 1928 when Warren Johnson's grandson, Adolph, was crossing two men in their Model T. The boat twisted and capsized after the cable snapped. All three men drowned. 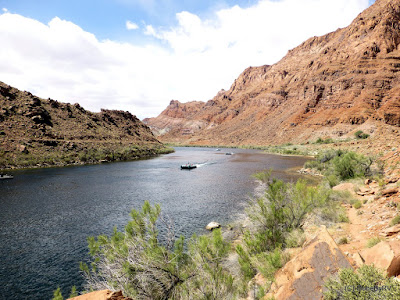 The construction of the new Navajo Bridge in 1927 (with completion in 1928) spelled the end of the Lees Ferry forever. Now this area is only used by boaters and outdoor enthusiasts to enjoy the beauty and resources of the Colorado River.


Well, that's it for our stay in Page, AZ. We'll be moving on to Hurricane, AZ next and enjoying Zion National Park, St. George, UT and the surrounding parks in that area.