Posted from near Page, AZ
(Click on Pics to Enlarge)

I'm trying out something new beginning with this blog. When I post pictures in the blog, they are usually just a small fraction of the available photos taken which deal with the subject matter of that blog post.  So......for readers who would rather just look at photos and bypass a lot of my rhetoric I'm going to post links to our Google Photos Albums to enable readers to take a further look.

On Wednesday (4/26) we decided to visit a few of the nearby beautiful sights.  The first on our list was Horseshoe Bend Overlook. This area is reached via a parking area just off of US89 just south of Page. The land is part of the Glen Canyon National Recreation Area and there is no admittance fee for this one. 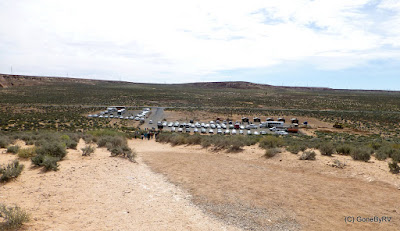 We were forewarned that the crowds could be heavy and the parking lot fills up quickly. Early morning and late evening are the heaviest times. We arrived around 10:00 AM and had no problems finding a space. We drove by on Saturday about 2:00 PM and cars were lining US89 in both directions. I think we made a wise choice. 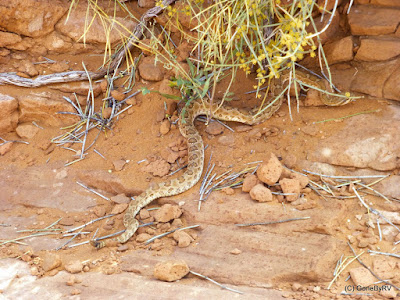 We've seen a LOT of tour buses during our stay in the area.  Many are carrying international visitors and they LOVE, LOVE to take pictures. As we were walking up the trail toward the edge we noticed that a small group of these "tourists" had stopped and were photographing like crazy. When we were able to move closer we discovered a small rattlesnake was the subject of the picture taking. Poor guy. I bet he'll remember not to go back to this area again! 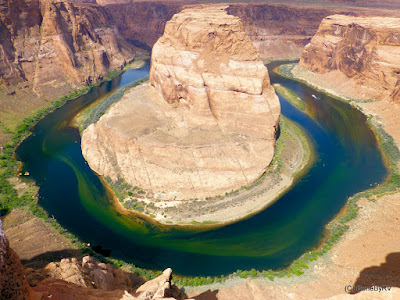 After a short hike (about 3/4 mile) from the parking area we arrived at the edge of the canyon and marveled at our first glimpse of the Horseshoe Bend on the Colorado River.

Let me just say that my photo does not do this area justice. It's hard to get a sense of the vastness of this marvel. From the rim to the Colorado River beneath is about 1000 feet. 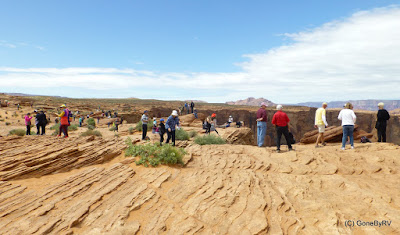 People were lined along the rim to take photographs. At times, people get a bit "crazy" close in their attempts to get that perfect shot. 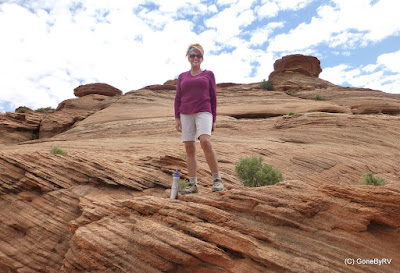 I eventually climbed up on the rock above Karen's left shoulder to get the following shot from a higher perspective. 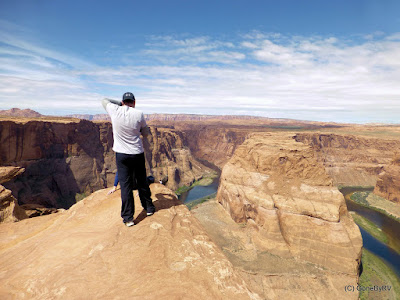 Another person beat me to the spot!

We stayed for a bit and took a ton of photos from different points along the rim.  The weather was beautiful, probably in the low 70s, but I definitely would not want to be trekking out here when the temperatures are high and the wind is kicking up.

The next attraction we had heard about from several of our blog readers as a "must see" was Antelope Canyon. I'm a big researcher when it comes to places to visit, so I discovered that the main tours of Antelope Canyon are divided into the Upper and Lower tour.  All tour companies have a general tour as well as a longer photography tour for folks who have nice camera equipment and wish to spend the extra money for more time in the canyon.

All of the tours of Antelope Canyon must be conducted by Navajo guides as the Canyon is on Navajo land. What this means is that in addition to the price of the tours (which are generally $25/person for a standard tour) everyone must pay a Navajo land admittance fee of $8.

There are only a few companies which conduct all of the tours. That generally means that the admission fees are tightly controlled to yield the highest income for the company.  The most popular tour seems to be the Upper Antelope Canyon, followed by the Lower Antelope Canyon. The problem with that is that these tours are generally loaded with people. The amount of folks in the tour groups make it very difficult to photograph the canyon without getting shots of your unknown closest friends.

My research turned up a tour of an area named Canyon X (which is just another part of Antelope Canyon) by Taadidiin Tours. The tour was only $5 more than tours described above and the guides and the tour received great online reviews.  The big draw was that this area has yet to be discovered by the masses and the walk through the canyon is at a much more leisurely pace. We decided to take a chance! Boy were we happy that we did! 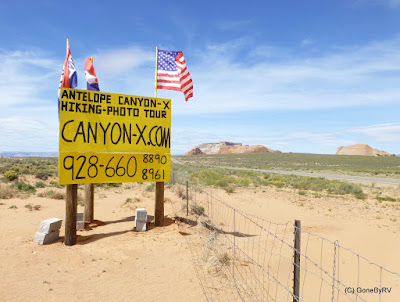 We drove past the other tour companies on AZ98 (just east of Page) and looked for our tour at Mile Marker 307.  Well, at least we located the sign. 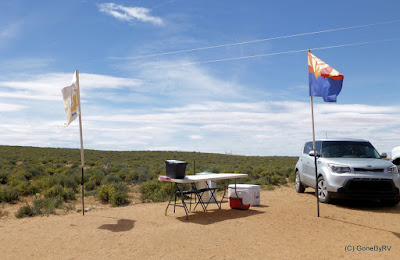 We turned into the parking area and walked to the "administrative office" of the company.  We were met by one of the Navajo female owners of the company and warmly greeted. She took our credit card on the spot and in a few moments we were loaded into a Suburban and driven to the entrance to Canyon X. 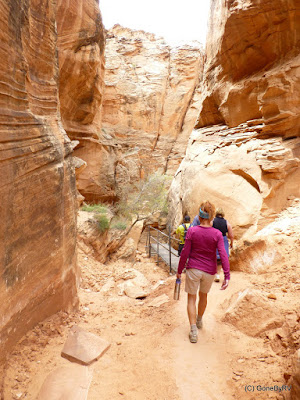 We met our guide Lionel at the top entrance and started a short trek down the hill to the entrance of the first slot canyon we would visit. (By the way, our TOTAL group consisted of one other couple, plus Karen and me.) 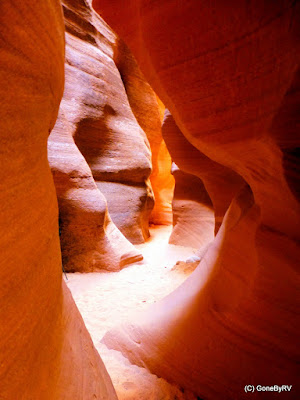 These canyons are called slot canyons because they are much taller than they are wide, and are formed by rushing water against the rock. We were in awe as we saw our first glimpse. 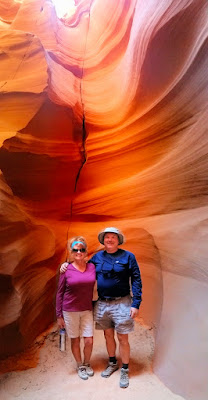 Again, none of my photos are able to capture the beauty of these canyons. Our guide was very happy to assist us with camera, cellphone,  and DSLR settings to attempt to capture the best possible photos, however. Here's a vertical panorama shot he took of us using Karen's cellphone. 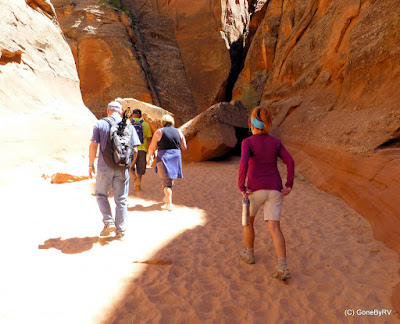 This tour takes everyone into two different slot canyons. Even the trek between the two was beautiful. Lionel related stories and beliefs of his Navajo ancestors concerning the canyons. 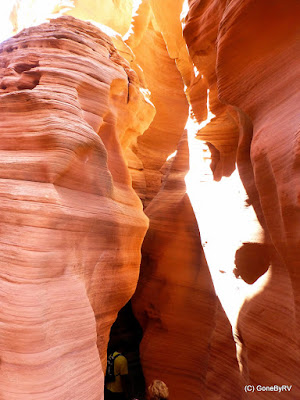 Not to bore everyone with shot after shot of the beautiful interior walls of the canyons, here's just one more. Be sure and click on the Canyon X link at the beginning of this blog if you'd like to see a bunch more. 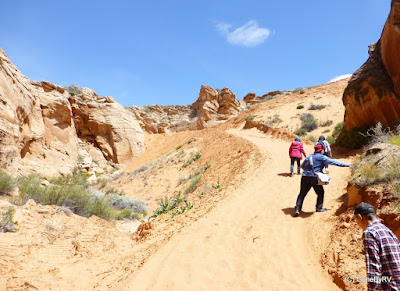 
We were VERY HAPPY with our selection of the tour company to visit Canyon X.  I can't imagine being surrounded by lots of fellow "tourists" while being forced to move along. If in the area, I would give this company a try if you want to visit Antelope Canyon.

Okay, that was enough for one day. Actually, we were going to return to the visitor's center at the Glen Canyon Dam to take a tour, but the elevator to the bottom is still out of order.  We might have to table this for a return visit to the Page area.  That wouldn't be such a bad thing!